In his constant quest to test the applicability of his "Battle Commander" rules, Richard took us back another 100 years or so to Edward I hammering the Scots, this time at the Battle of Falkirk. Jon & I took the Scots, everyone else was the English. 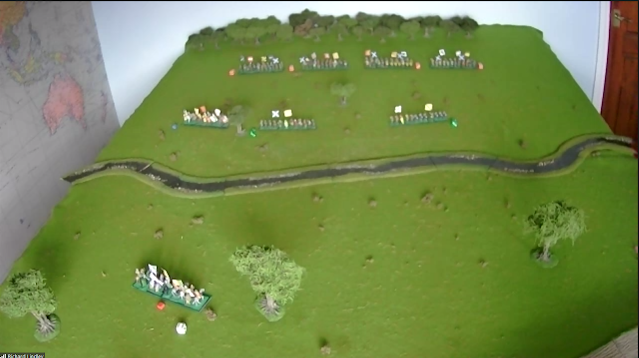 Firstly, sorry that the pictures are a bit blurry. Richard was using one camera, and the large tree in the foreground drew the focus. Jon & I are deployed in the distance, cavalry and bowmen to the fore. Unbeknownst to the English, the centre bit of the river is boggy.
Turn one, and some English cavalry arrive, commanded I think by Steve. 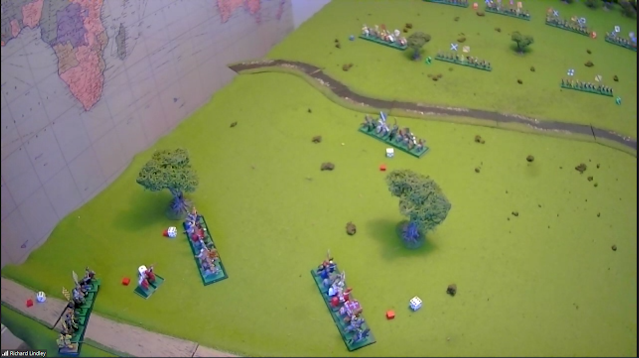 More cavalry arrive and head towards us. 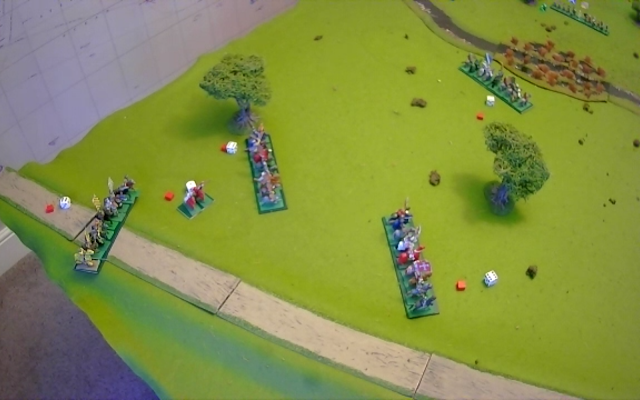 Ha-ha! The English discover the bog. They realise they need to split and go either side of it. We are in range with our bows, and start to shoot them up. Archery was quite effective in the game, more so than we expected.
Now I should mention here that in the pregame briefing Richard said that the only way the English could really lose - or the Scots really win - was if Edward died. That's why the two figure group representing him is skulking at the back. 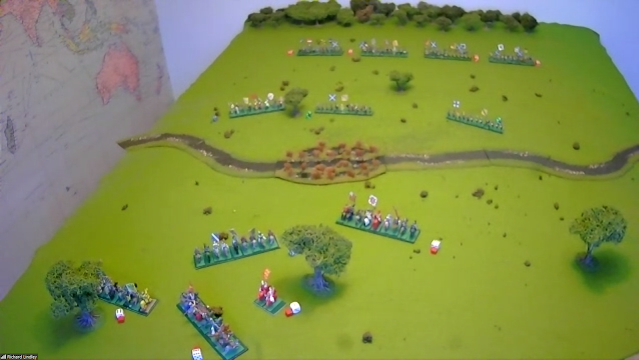 Sure enough the English start going left and right of the marsh. 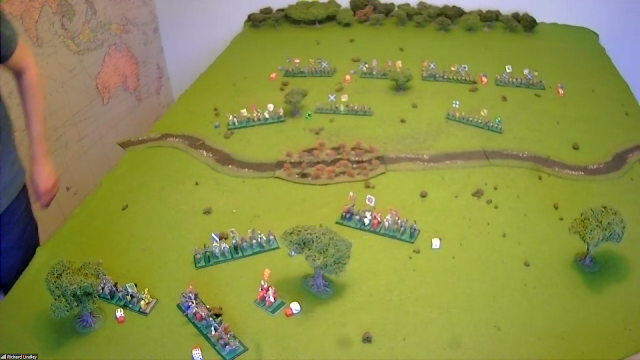 I therefore kicked off an advance to try to ensure that the English couldn't cross the river in too leisurely a fashion. 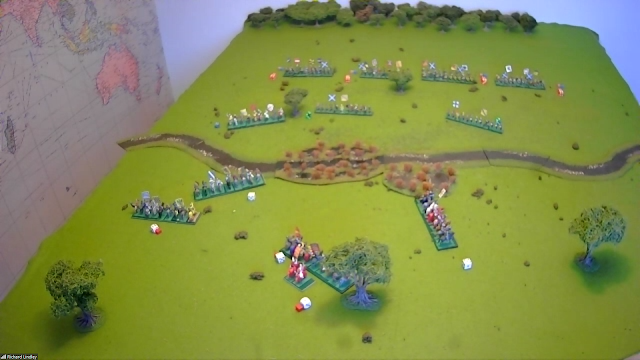 More bog appears! My shooting (I have the three units on our left) at the cavalry is quite good. Steve has taken quite a bit of damage. 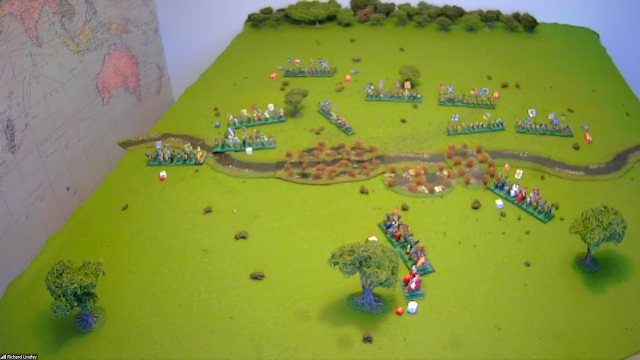 More bog! On our right the English start to cross the stream. Jon manages to get our otherwise dodgy noble knights on horseback to close them down. 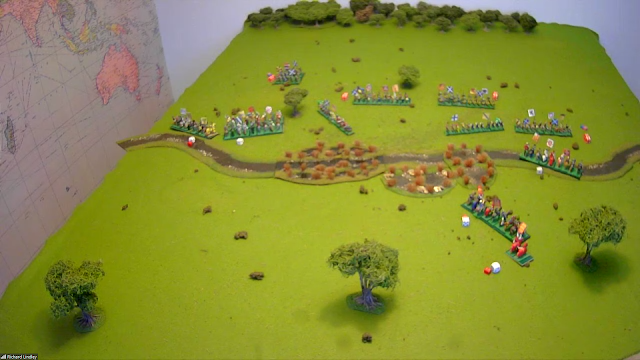 As the cavalry melee ensues, Phil tried to turn our right with some cavalry, and Steve heads for my line of spearsmen. 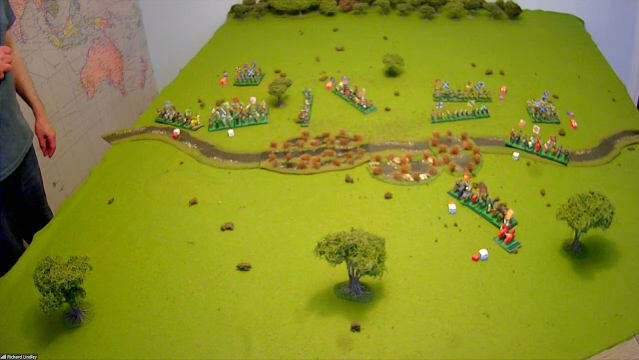 But my laddies have a trick up their sleeve, and rapidly form themselves into the new schiltron formation. What do you think of that, Eddie? 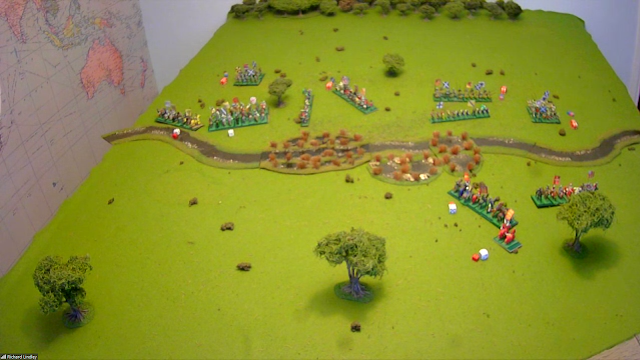 Steve's cavalry charge in, but shot up as they are, they take more damage and decide to retire. Can we scent victory??? 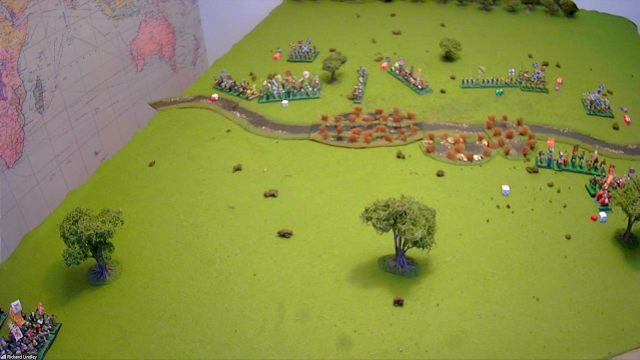 On the other wing, Phil has joined the melee. Not looking good for our knights. I put my other unit into schiltron and drop my archers back to resupply. Jon starts to schiltron his infantry too. 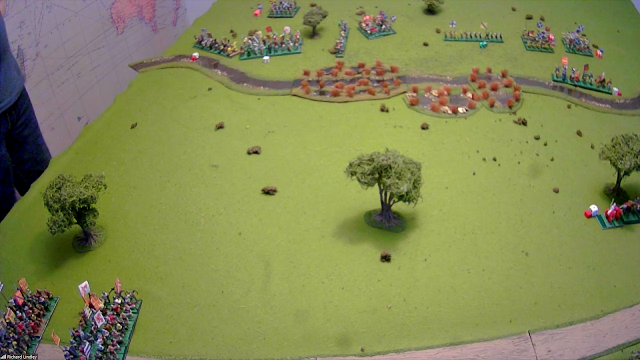 What's this? Loads of foot arrive. I'd say English, but they're a lot of Welsh and Irish in there too. 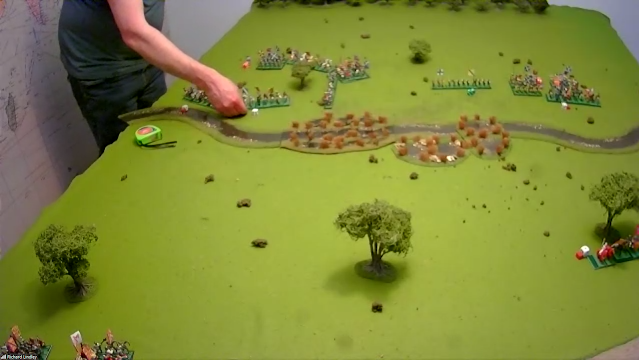 Our cavalry breaks and runs. Steve or Ian send some more cavalry into my schiltron on the right. 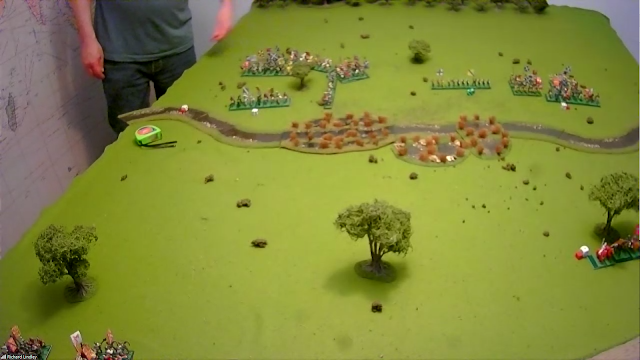 On the left, the pursuing English cavalry collide with Jon's schiltron. Bit of controversy here, as the charge intimidates the foot and then they roll three hits out of four dice but the Scots still stand. This might be because of the damage previously inflicted on them. (BTW Richard has nicked elements of my NYET/DA test from IRFI and the Intimidation test from "Pike to Bayonet", imitation being the sincerest etc, etc,). 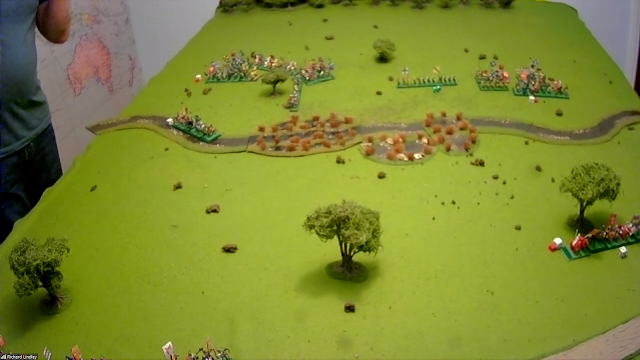 Jon's archery drives back the other English horse. In the bottom right Edward is speaking to the previously retreating cavalry to bring them back. 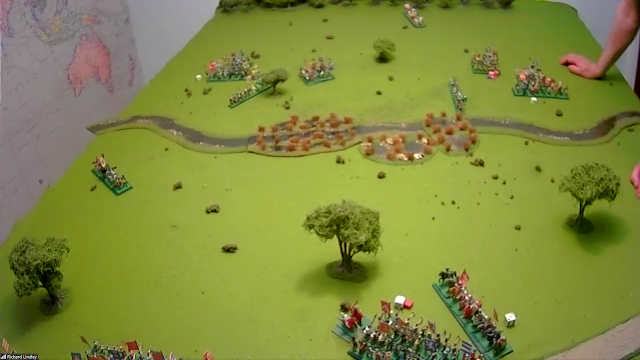 The melees go on. Richard won't allow schiltrons to close with horse, so I have a spare unit standing around. I edge it back so my archers have a clear shot if the cavalry break my other schiltron. 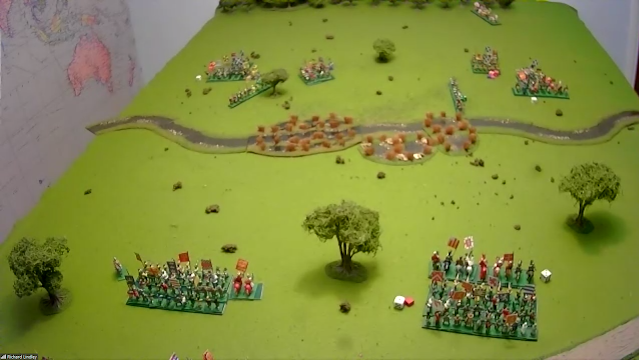 My goodness! There's a lot of enemy foot arriving. By now the casualties are mounting, and my leader has been seriously wounded. 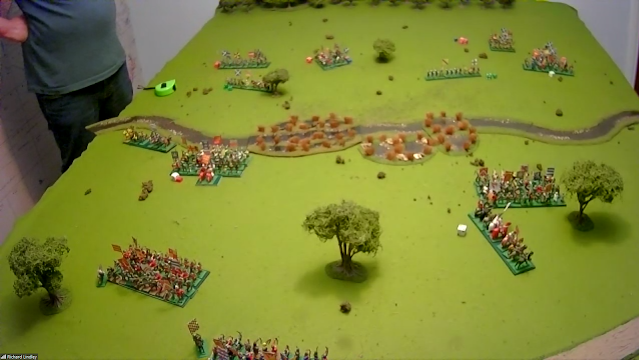 It is time to extricate some of our units, so anyone who can turns and heads for the woods to fight another day. 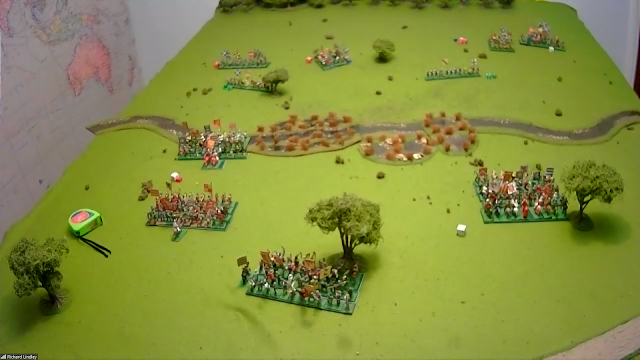 And that was it. The English couldn't catch us before we got away, so a sort of draw in that our army was not completely destroyed as happened historically.
We didn't have a long chat afterwards, but emails have been exchanged. My feelings are that there need to be changes for the rules to work well in this period, but it was a good start. Richard needs to firm up what he thinks is going on in a schiltron and how infantry faces off cavalry.
An interesting start. If he is to persist with these rules, then I think Richard needs to break out of the refight cycle and put together some specific scenarios to test what the rules are doing.
Next week, something a bit different.