The Battle of San Martin..o, is that it?

We returned to Jon's basement to finish the second half of the Battle of San Martino from the Italian Wars of Reunification. We had the same crew as last week, plus Chris who joined in with the Italians.

I approached the game with some trepidation as I reckoned we were only a move or two from complete defeat. I'd pushed a few ideas around between games and thought we had one chance to break the Italian centre, based on a rules conversation I had with Jon. If that failed, then I was prepared to give up a minor victory by falling back to defend the Austrian baseline objectives. 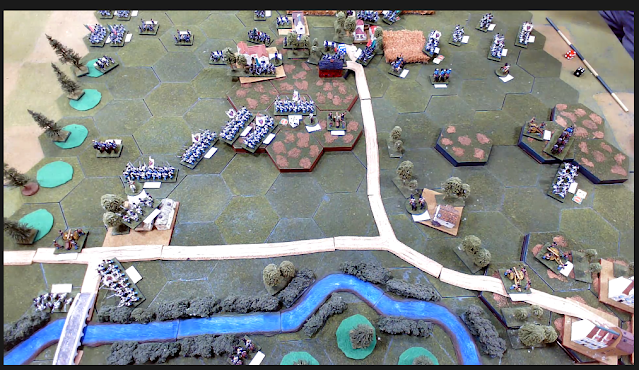 This picture is after the first brigade activation. On the centre hill I put one of the two infantry units that were in front of the left hand village on reserve orders, bombarded it with my artillery and assaulted with a fresh battalion. the artillery missed and I got a draw in front of the village that resulted in me being bounced. At that point I thought that it was probably time to consolidate around the village bottom right and the bridge bottom left to prevent a complete army collapse. 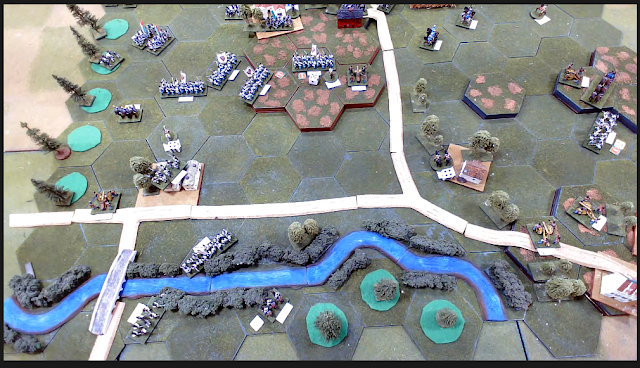 I needed to ensure we could do this in safety, and with Phil pushing up on our left, I decided to administer a quick shock to stall his advance. On our side of the water I sent a couple of units to deal with the wandering cavalry. It actually only needed the one in the end. 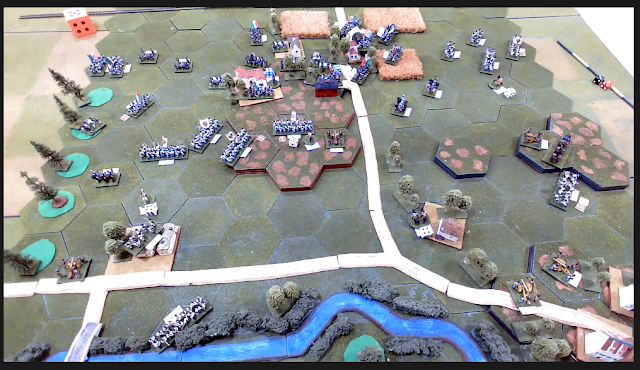 I put enough rifle fire into Phil's double unit on the left to destroy one of them, but my artillery and jaegers were unable to deter his other cavalry. On our right, Ian is pressing in on the villages. 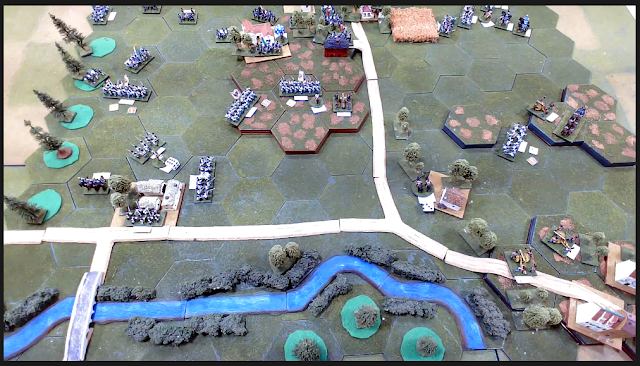 Phil charged the gun and destroyed it, then brought up his artillery and blasted out my left centre. I brought up the line regiment that had been chasing the cavalry to bolster this wing. My main hope now was for the game clock to tick down quickly enough. You can't see it, but our right is a bit flimsy, and Chris K is attacking it vigorously. I ordered Ian to drop back on the village bottom right to stop us being cut off. 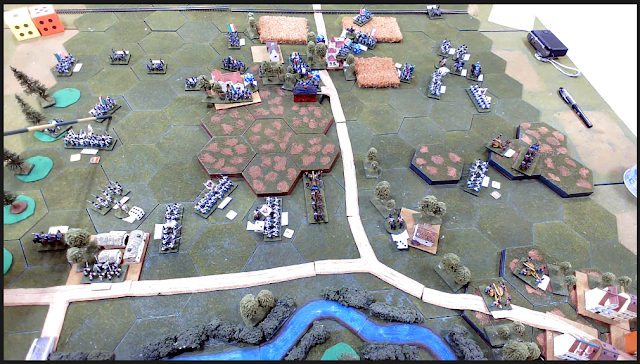 I've managed to pull back off the central hills, and am sheltering in the lee of the hill. This brigade is "broken" which means it doesn't run away, but suffers a negative modifier on moral rolls. Phil is pummelling my left, and that brigade is soon in the same state. 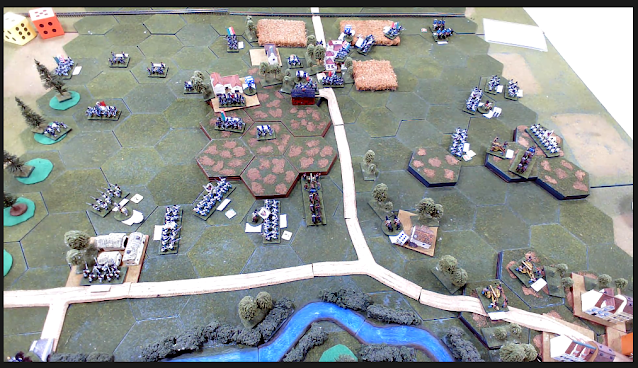 Ian is starting to extract himself skilfully, and is conducting a fighting withdrawal. Then, inspired by Phil's cavalry success I suggest Ian charge the guns, top right. In he goes, and sweeps them away.
At which point Jon says it is game over, as Ian has broken that brigade which means we win. Turns out they had three brigades, and we'd already broken the one in the centre, so that was a majority of their army gone and having to retire. Apparently we were one hit from it being over for us, too.
So it all ended satisfactorily for us Austrians, much to our surprise. I hadn't been keeping track of the damage inflicted on them so hadn't realised what bad shape they were in. Okay, so Jon told me they had been roughed up kinda badly, but I thought we were worse.
It was a nail biting game. I mismanaged our side quite badly, until I got a grip on how the rules worked and even then I kept making silly mistakes. Luckily the fighting quality of our troops saved us, in what was a real "soldiers battle".
Phew.