1859...what's all that about? This week the MNG was given the chance to play Jon F's Battle of San Martino scenario from the Italian War of Unification. This is on the flank of the main Battle of Solferino, where King Victor Emmanuel II is doing his best to ensure that the French can win his strategic victory for him. Jon has run it a couple of times already, over on his Palouse Wargaming Journal blog. In keeping with my normal practice I avoided reading up any of the previous games so I come at it as fresh as I can from the Austrian commander's perspective. 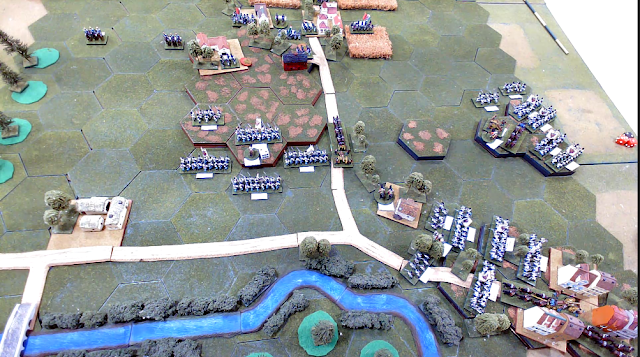 Yes, I took the Austrians. This shot is from behind our position. Ian had the right flank. I am starting with a quick push up the centre of the board to seize the heights. After some discussion Jon allows Richard to change the pre-determined deployment of the Sardinians and move some of his cavalry out to his right flank. This will have a major impact on the game, especially as our cavalry is at the back of our column, coming on to the table from the bottom right corner.

This double shot shows the table from behind both lines, side by side. 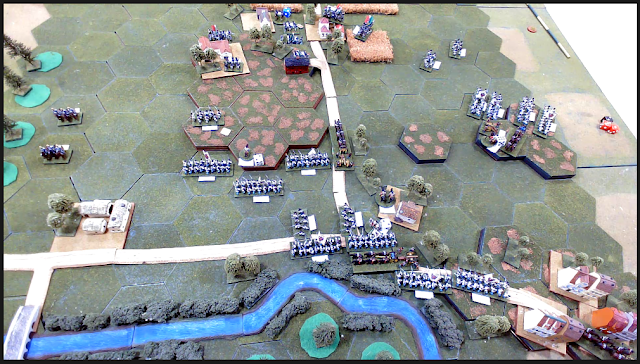 As you can see Richard is sending the horse round our left flank to occupy the bridge bottom left, which is one of the objectives. We have already had a ridiculous run of luck, and lost an infantry battalion (and a good one at that) in the centre of the table to one round of firing. That means we don't have a lot to spare to head off the cavalry, as the reserves will take a turn or two to get there. Having lost a battalion early on I don't have anything to spare from the centre. 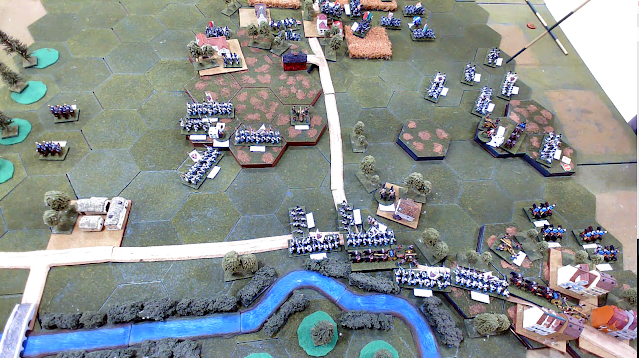 Ian is pushing up on our right, but lots more Sardinians are arriving. My infantry at the base of the hill, despite being elite grenadiers, are unable to inflict any damage on the cavalry which was my main hope of slowing them down a bit. 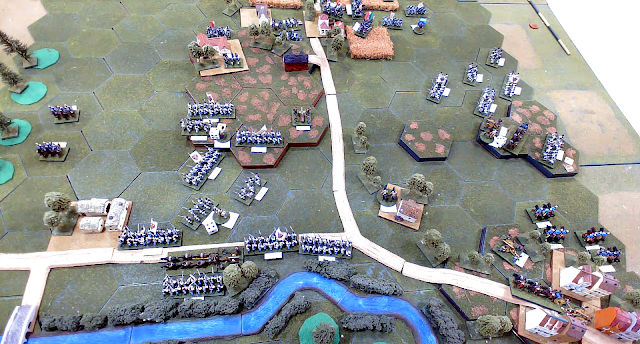 Our reserves pour up the road at full speed to protect the bridge. 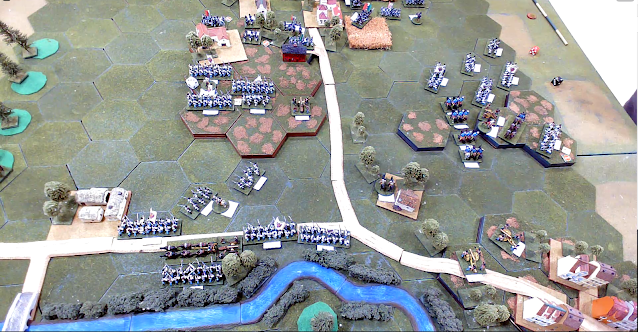 Richard's cavalry skip past everything and some are now across the bridge, bottom left. The others are hiding in the woods on the left. You can just see the edge of their bases amongst the trees. Ian has been allocated our reserve cavalry on the right, to try to execute a brilliant coup before the Sardinians deploy properly. We have also unlimbered the reserve artillery on the high ground bottom right. Alas the ground isn't as high as we thought it was. 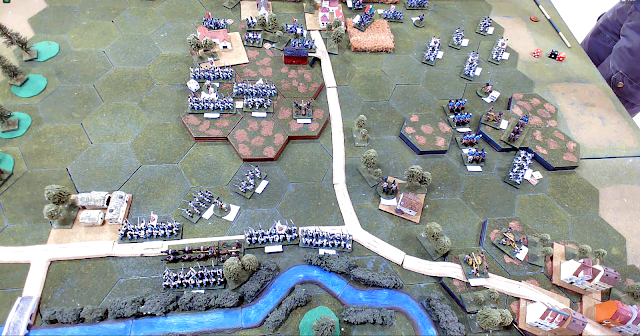 In the centre my plans are dashed by a bit of misunderstanding. I launch an assault on the village centre left, and drive out the defenders. However, the rules do not allow for the attacker to follow up onto the objective. What I needed was another BRIGADE not another unit, that I could activate separately in order to advance into the village. i.e. I need the reserves to be up alongside this assault on their left, not chasing along the road towards the bridge. This error is compounded as the unit I threw out of the village hadn't been activated this turn, and was able to retake the ground unopposed. 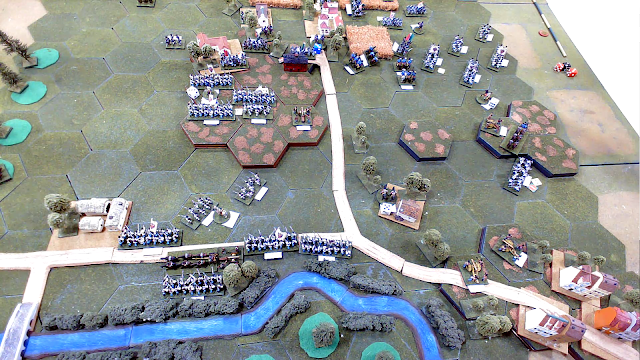 Over the right, Ian has drawn the Sardinians in the vineyard forwards (brown square which covers 3 hexes) and is able to launch a cavalry charge on them from front and flank. He comes very close to destroying them, but they recoil still having a strength point. 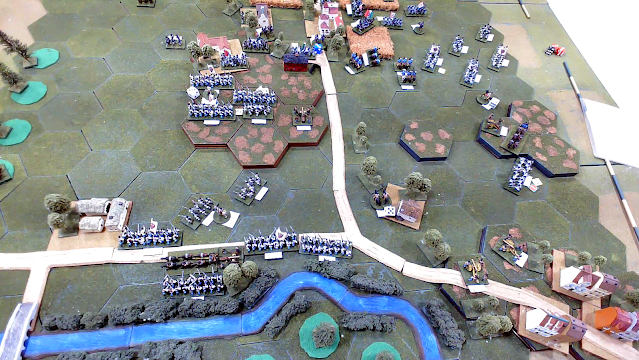 The fight in the centre is intense. My artillery on the ridge, and some of the reserve guns have been pounding the red village. The King is somewhere behind it, rallying his men. 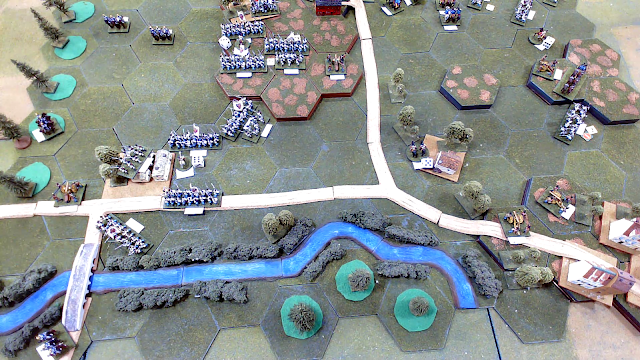 I have now got some troops into position to shoot at those cavalry by the bridge. My shooting is rubbish (or rather Richard passes his morale checks). Phil has also arrived, and his troops are appearing at the top of the picture. We are struggling to achieve dominance anywhere on the board. 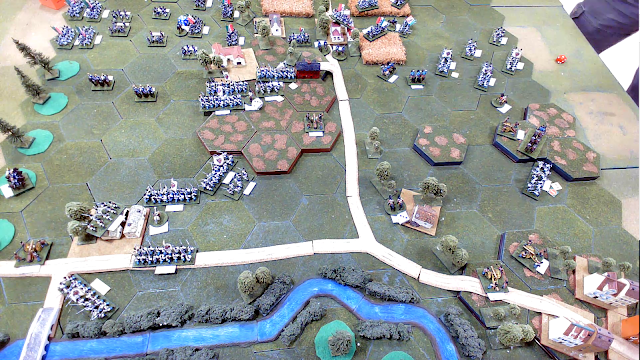 I think this is the point where a combination of artillery and cavalry destroys the Sardinian unit on the road to the right of the red house. This means the king must make a saving roll. He passes it by one pip on a d10. Close, so very close. 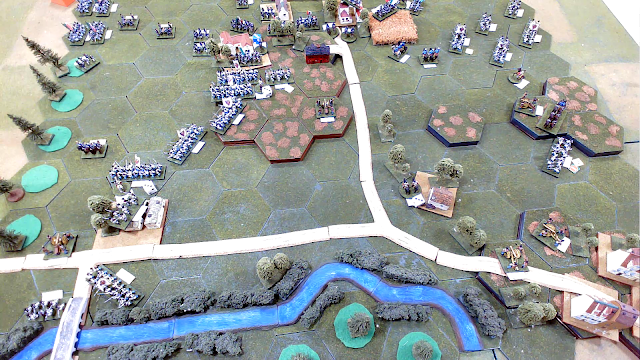 I've had to divert a unit of jaegers to shoot at Richard's irritating cavalry, and despite this they still don't have a scratch on them. I still can't get into the hill top villages either, and Ian's advance on the right is struggling to make real inroads. 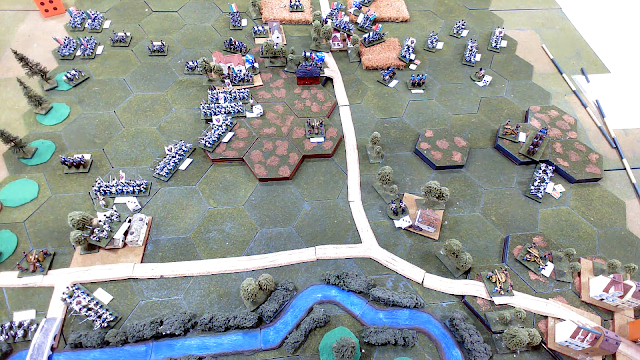 This is the end of the first session. The Sardinians are ahead on victory conditions, because of the cavalry on the bridge. I can't dispute it was a genius idea to switch them, and it serves me right for not requesting changes to our deployment and sticking to the historical set up.
More next week.
Italian Unification