Mark Plant comments on "It Rolls for Ivan"

Mark Plant has done more for Russian Civil War wargaming that anyone. His Pygmy Wars website is an amazing resource. Whenever he comments on a post or forum he's well informed, polite and helpful even when he's telling you that you are wrong.

Mark is a fan of The Perfect Captain's "Red Actions". I have played these in the past and enjoyed them, but they didn't quite scratch the itch I had, so hence I wrote my own rules. However Mark, to be fair to all concerned, posts links and comments about other rule sets. When he contacted me about IRFI so he could post about them I was both delighted and also a bit worried. What if he hated them? 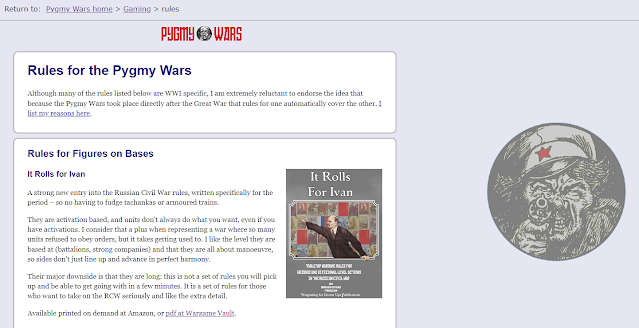 He doesn't completely hate them - unlike some rules he lists -  and it sounds to me that I have got right what I wanted to get right.

As Mark says, the rule book is long, at just over 100 pages. I would say that as the book include a good bit of background as well as quite a bit of explanation as to why I've done what I've done the actual rules themselves aren't enormous. I reckon they are simpler than most TFL rules, for example. The section on armoured trains is 10 pages, but no more than 1 or 2 of those are actually rules and most of it is about how you set them up to play. Once you've done the configuration - most trains are unique in some way - you probably don't need to refer to that section again. And you can take a short cut by downloading the Resources Pack, which has several trains already set up for you.

Anyway, to have them described as a set of rules "for those who want to take on the RCW seriously" is good enough for me.

Thanks Mark, and thanks for all you do for the hobby.