After last week's game the players wanted to have another go, but with swapped sides. In fact we had extra players too, to add to the experience. Disappointed by the lack of fighting last time round I fiddled around with the briefings. The result was a lot more intense and a lot more bloody. 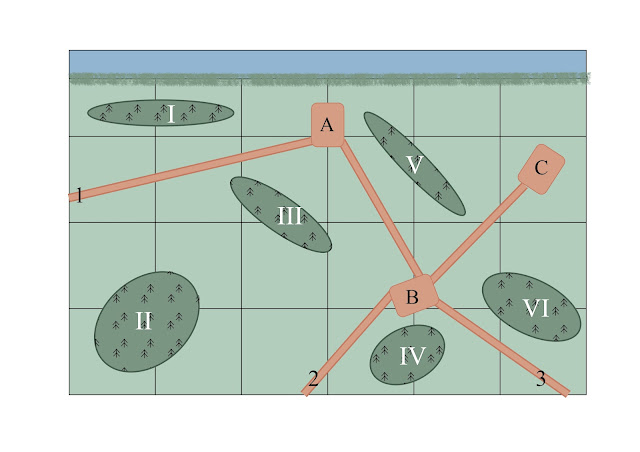 To recap, the scenario has the British occupying blockhouses at A and B with garrison troops. A British brigade is being sent to extract them, entering the table between 1 & 2. The Bolsheviks have sizeable forces in the area, rushing to defeat the British and capture the blockhouses as a symbol of Soviet power. They start the game with troops in V and VI if they want. They have initiative on turn 1. 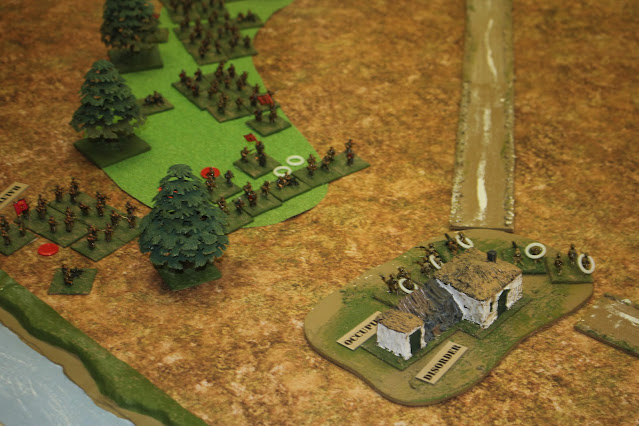 This week Jon had command of the Reds, assisted by Chris and Tim in Shedquarters, and Will online. The British were led by Ian, with Phil in SHQ and Richard and Steve online. I hope everyone had enough to do. It's a four player maximum scenario really!
Anyway, Jon being Jon had asked some questions beforehand, read the rules and had a plan. He assembled overwhelming force in V, and started with massed rifle fire into blockhouse A. This provoked an appropriate response. 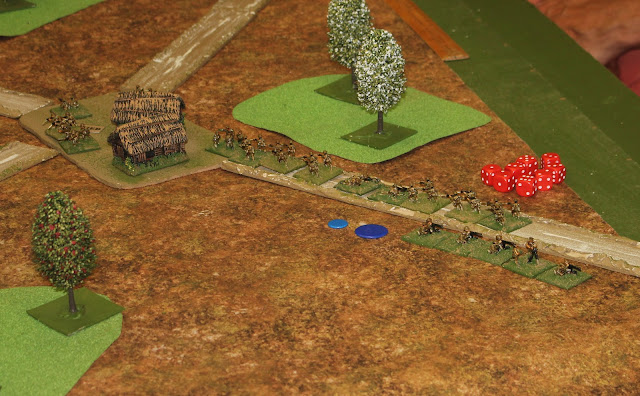 This concentration on A meant that the British were able to launch a dash up the road from 2, towards blockhouse B. 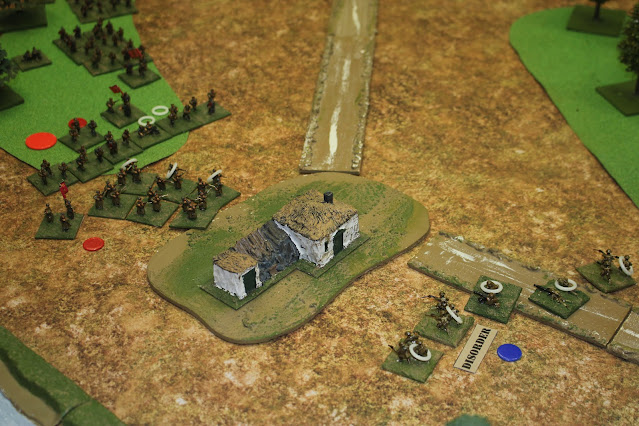 The Reds, having given  A a few more rounds of firing launched an assault. The garrison fired, waivered then fled in disorder. 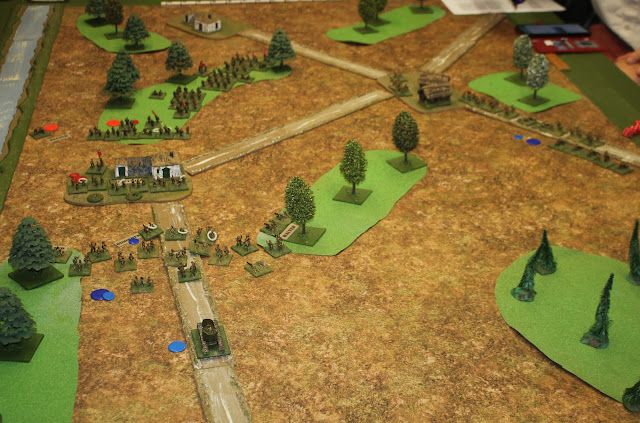 Too late to prevent this reversal, the other British battalion, supported by armour, rushed up the road from 1. Was it possible to evict the Reds cheaply, so the blockhouse could be destroyed? 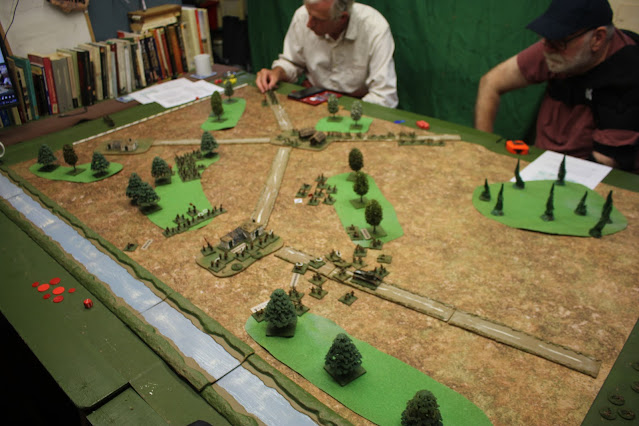 Tim sent a battalion of Red Guards into the centre of the board to distract the British. Red reinforcements were already arriving at 3. 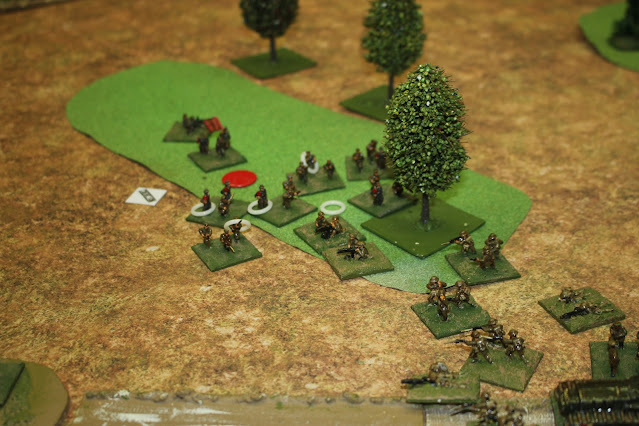 Tim tried to flank and overrun a British MG company. It let off a couple of belts and fought back hard, but were evicted from the wood in Disorder. Much triumphant flag waving by the Reds ensued. 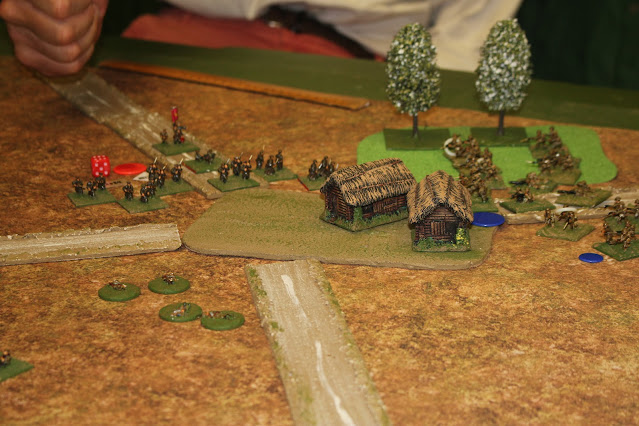 Much has gone on. Tim attacked B with a column that got badly shot up. Chris then attacked from the other side, and drove the defenders out, but didn't have enough activations to follow up and take the building. Blockhouse B was temporarily unoccupied. 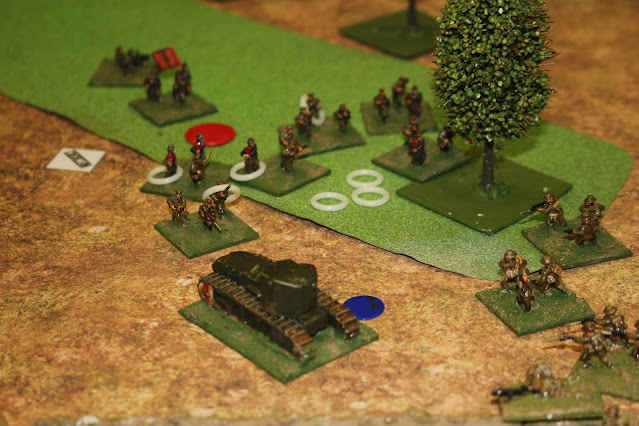 On the other flank, Steve stormed up with the Whippet and machine gunned the troops in the wood. This week it didn't break down on turn one. 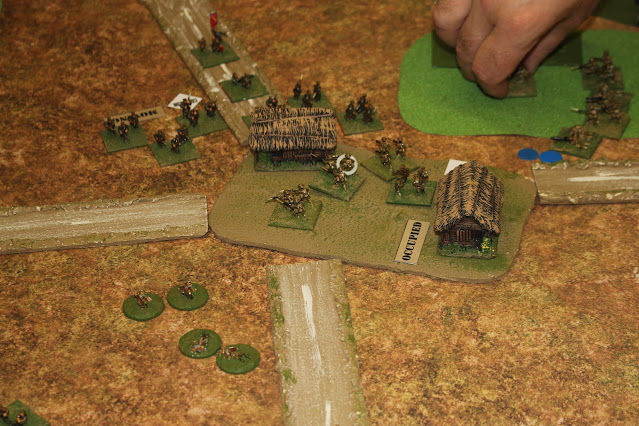 Phil reoccupied Blockhouse B, and started to prepare it for demolition. 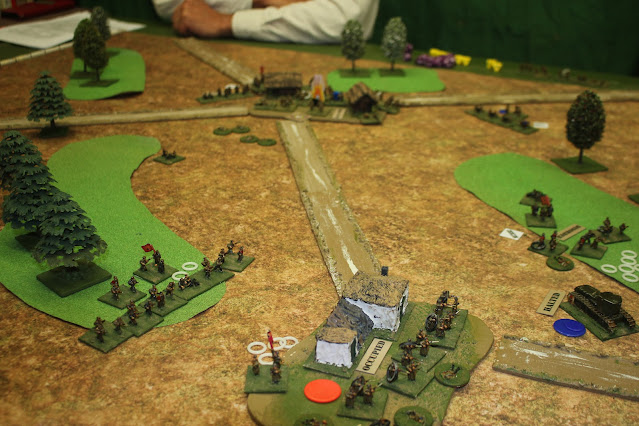 The Reds now have artillery, and in the distance you can see them shelling blockhouse B. Near the camera they have got a defence in depth position around blockhouse A. 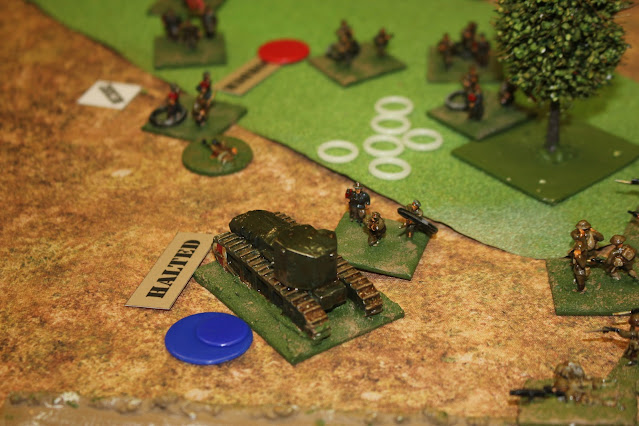 Suffering galling fire from the Whippet, Tim launches a close assault on it before his unit is driven off. He comes very close, but is killed in the attack. 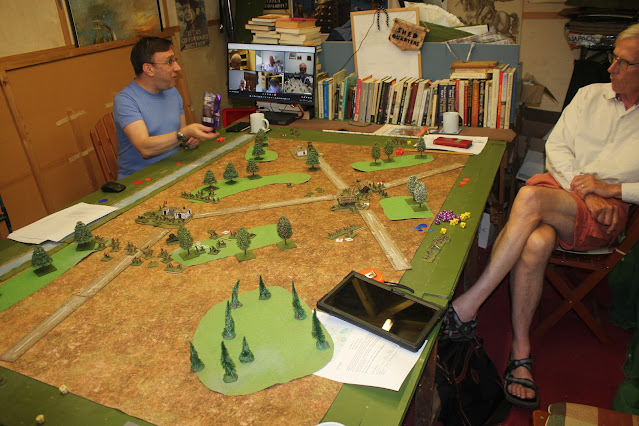 It was a hot evening. We had to eat the chocolate quickly before it melted. 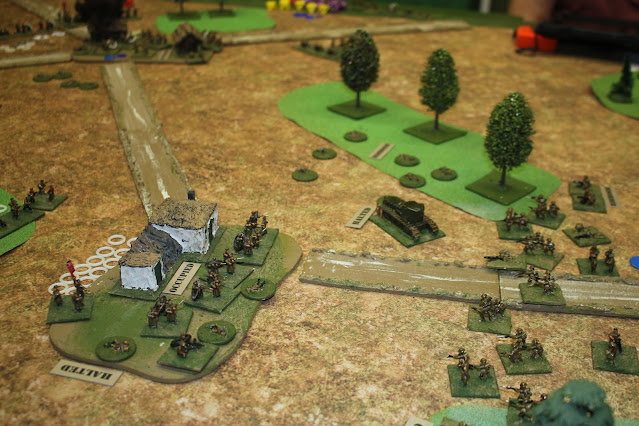 Richard had got his British infantry properly sorted now. He poured sustained small arms and MG fire into the blockhouse and supporting infantry. 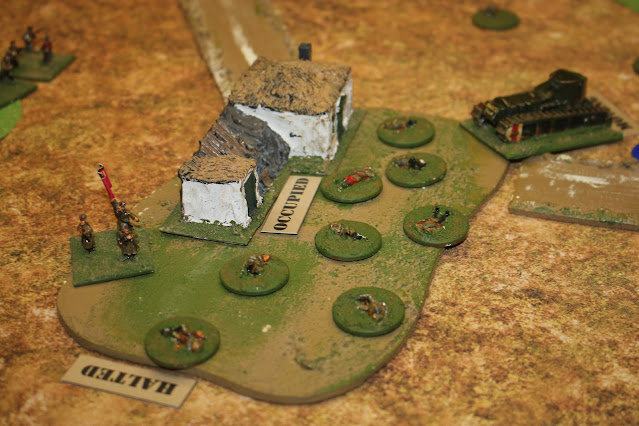 Steve administered the coup de grace by driving up to the position with the Whippet. 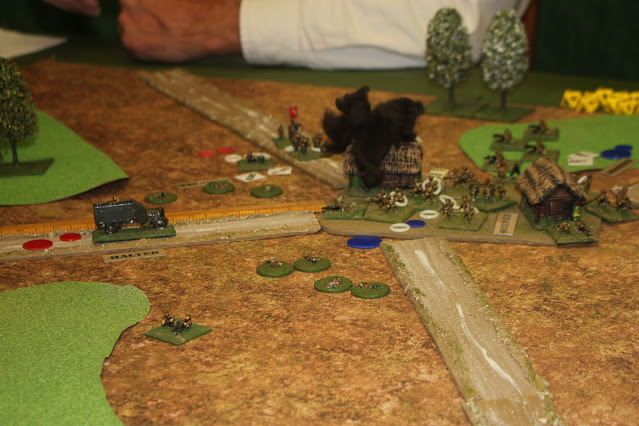 Down at the other end more Red reinforcements arrived, and the British set fire to the blockhouse prior to abandoning it for good. Phil is hanging on to make sure that it is really on fire and can't be saved, prior to escaping.
We could probably have run for another turn at least, but it was getting on, and it was quite tiring in the evening heat, so I called it a day.
A win for the British, but not a major one. The play balance was better in this game, but favours the Brits a bit, so I need to tweak it a bit more before I make it available, if I do. Jon's plan was a good one, but the British firepower is almost overwhelming. It is more like units in FWTDR, where players learned not to wander around in the open. That's generally less of a risk here, if there's no cavalry about. There was also some knife edge outcomes that showed the dice have a sense of humour. The artillery barrage on the blockhouse caused no casualties, for example. And, of course, I forgot to apply some of the rules properly. Well, I was trying to juggle eight players, five of whom were on line, in a shed that had been in full sun most of the day.
But a fun evening for all involved, I think.