As I am finalising "It Rolls for Ivan", I thought I should run another game or two, just to get some more photos and generate a bit more interest.

For this one I thought it would be interesting to have a look at some action up in the North West of Russia, where the British deployed ground troops and then had to get them out again, as Mr Churchill's Private War lost popularity within the government.

In the scenario there were a couple of blockhouses, set up by the British and manned by some slightly sub-par (in terms of fitness) infantry. A small brigade, consisting of two battalions, plus supports including a Whippet, has been sent to extract them, and also destroy the blockhouses to deny them to the Reds.

The Reds, in the meantime, have sent a strong force of Red Guards and a ChON battalion to capture the block houses and destroy the garrisons. Neither side knew the other's strength or aims.

Unusually for the Monday Night Group we played this one of a Thursday, instead of our usual Tuesday. 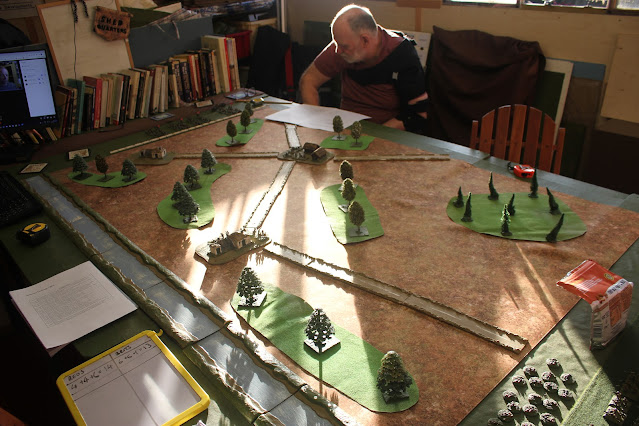 Ian was on-line as Red Commander, supported by Phil in Shedquarters and Steve on-line. The block houses are in the middle of the table. The British come on from the right. The Reds are concealed in the woods on the left. It was a warm, bright, evening with the sun streaming through the windows.
Jon was the British C-in-C, Chris K the on table commander. The block houses were run by the Umpire. 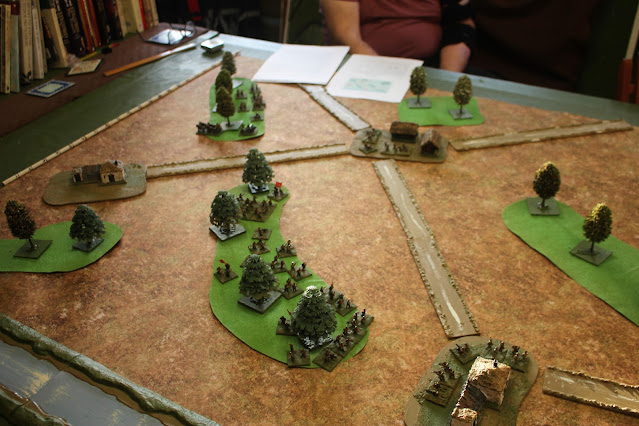 The Reds had the initiative in turn one, and revealed their locations. 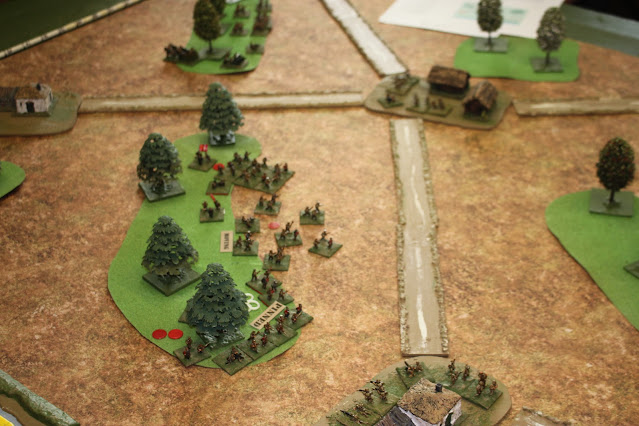 They started by trying to shoot up one of the block houses. They were surprised at the effectiveness of the return fire. The garrison may have been rated B1, but that didn't stop them putting forth a hail of bullets. Steve had moved a battalion out to exploit his hoped for victory in the fire fight. 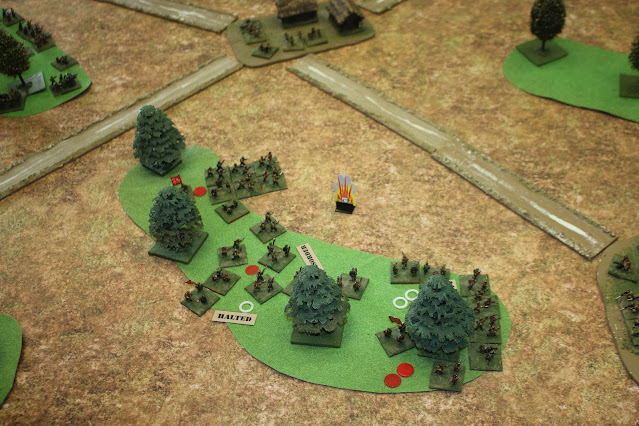 Jon, being Jon, immediately deployed his artillery, and sent them scuttling for cover. Jon is good with guns. 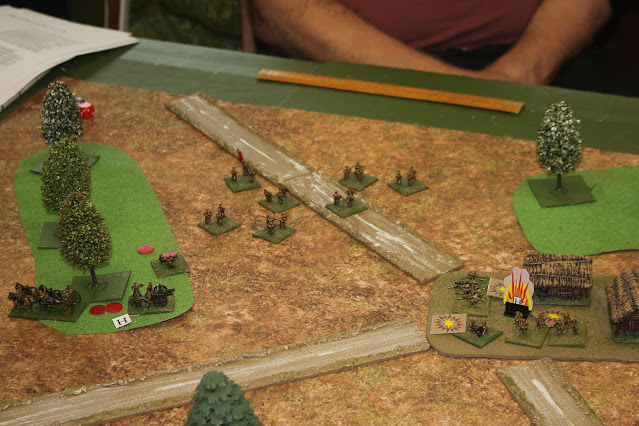 Over at the other block house Phil had an artillery piece, which he used to shell the target at close range. Using this as covering fire, he moved up the ChON. 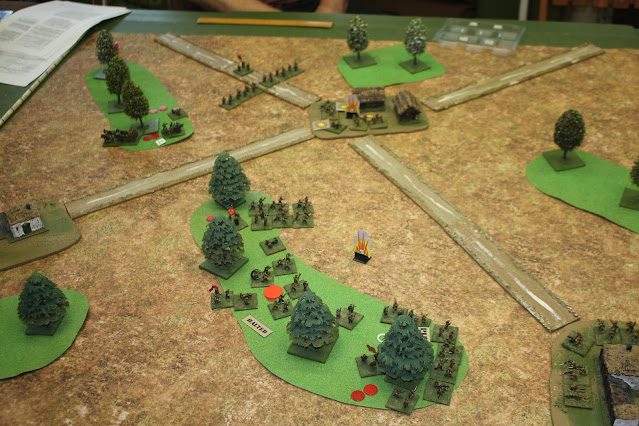 Phil then formed in a firing line, so he could bayonet charge the block house.
It is not obvious here, as there's no picture, but the Whippet broke down on turn one, with the engine overheating. 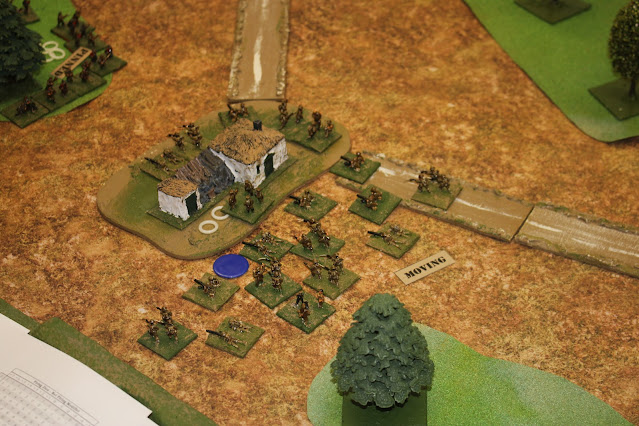 Quickly, one of the British battalions, complete with mortar and MG support, made contact with the block house, and ordered its evacuation. 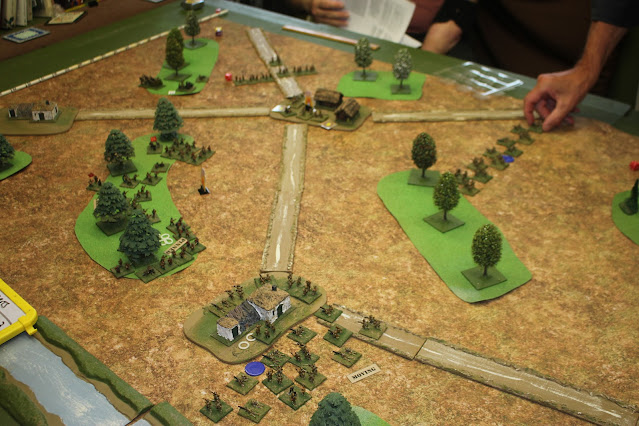 On the other flank, the other battalion is doing what it can to get to the beleaguered block house garrison, but it is taking a pounding. 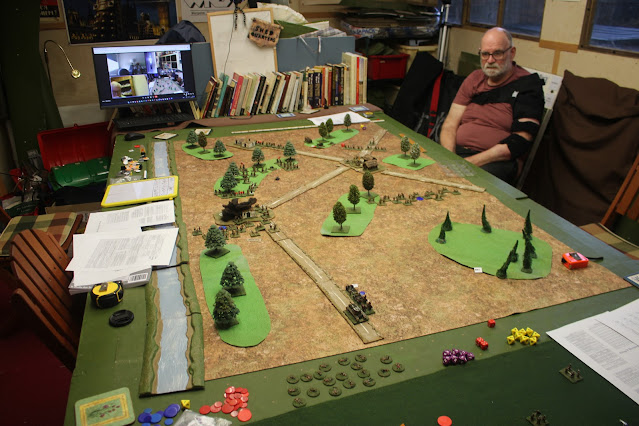 In the distance, some Red reinforcements arrive in the far village. The British have set fire to the block house they have evacuated. 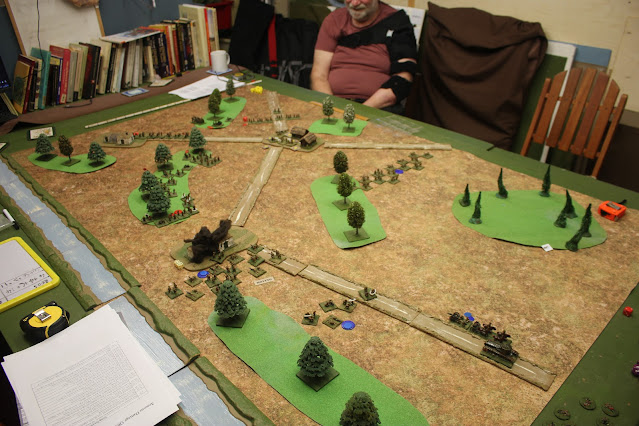 The block house garrison is well towards escaping off the table, as the covering force looks to withdraw. 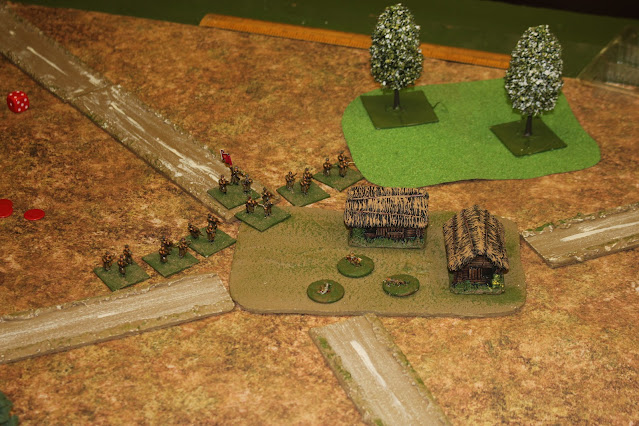 At the other block house, Phil lifts the bombardment, delivers a volley then bayonet charges. The garrison is wiped out to a man.
At that point both commanders declared it a draw, and we closed proceedings.
The game didn't go exactly as I intended. The Whippet breaking down was unfortunate. I haven't got the table set up exactly right. The Red artillery should be a reinforcement, not on table for turn one, for example. I will rejig things a bit, then we are going to give it a go next week.
The rules, however, are working just fine.