How does this go again (again)?

After more than year's break, I returned to the War of Spanish Succession period. This was occasioned by me finishing a load of new units that needed airing, and the need to put out something quickly. Oh, and I've got a new, green, battle mat that I wanted to use.

The last game with this system was played at the end of August last year, so it's been over 12 months, during which I have looked the other way to deliver my Russian Civil War project.

Anyway, I dug out the QRS and early rules drafts, wondered what it all meant - the last draft had some radical changes - and lined up the figures. I was expecting five players, so I had three Anglo-Dutch commands and two Franco-Bavarian. As it was we had two players in Shedquarters and two on line, but it ran just fine. 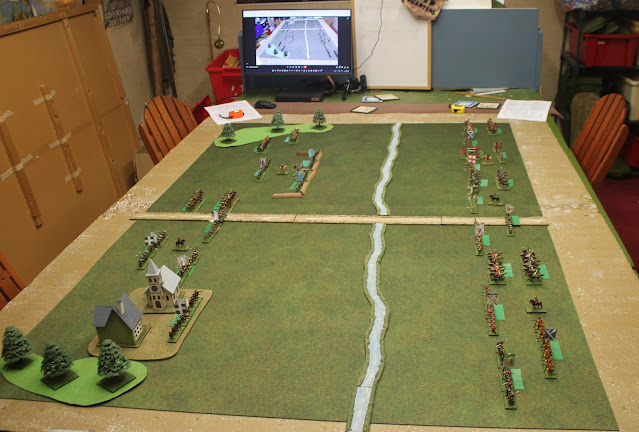 The Anglo-Dutch are on the right. From top to bottom there's a British Brigade of foot, supported by some Hessian cavalry, then a Dutch brigade with some horse, and finally some Hanoverians with both horse and foot. The British also have some artillery. Jon commanded the Anglo-Hessians, and Tim took the other two brigades.
On the other side the Bavarians were at the top, defending a fieldwork, with the French covering the centre and the town. Ian had the Bavarians, Chris the French.
The stream is a minor obstacle. 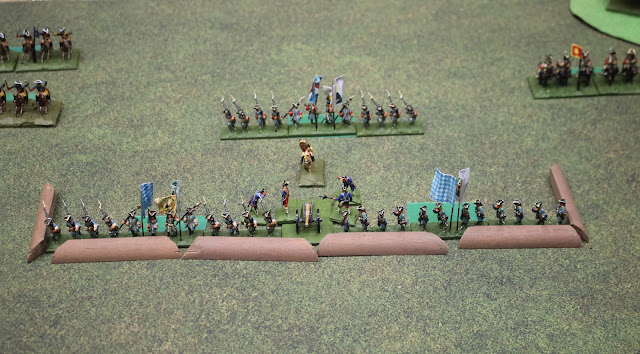 The Bavarians also had some artillery. 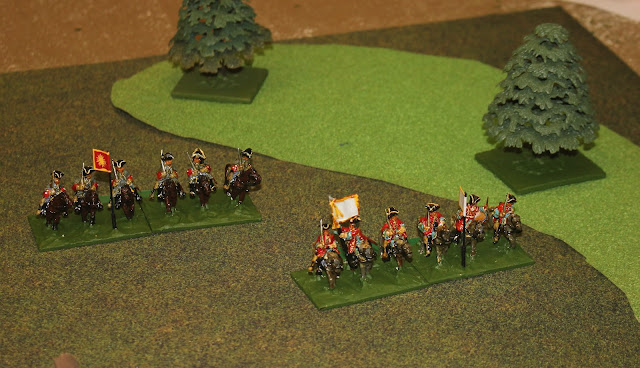 The Bavarian cavalry had some stiffening from some French horse. 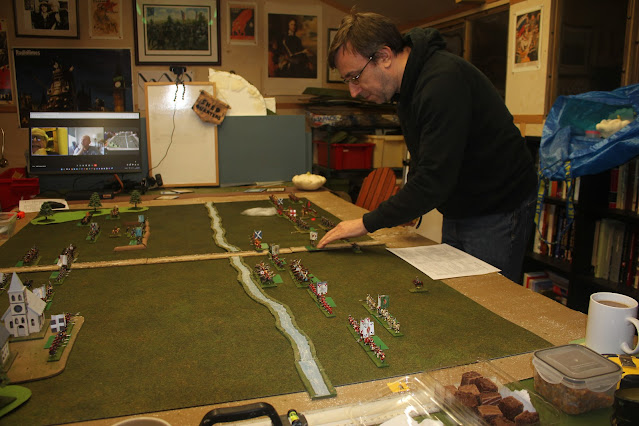 Tim moved first, and advanced everything. 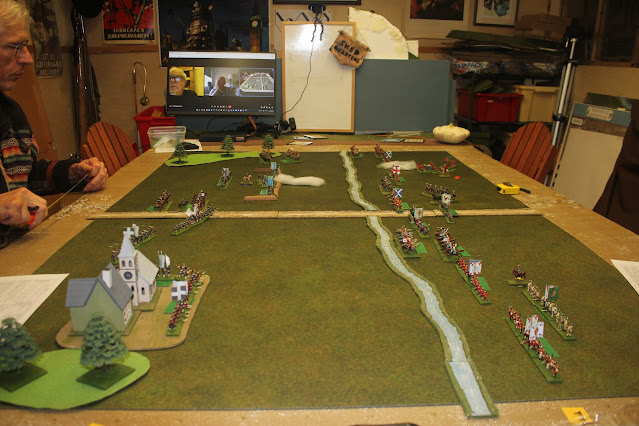 Not one to be left behind, Jon did likewise. Chris moved more troops into the town. The artillery of both sides blazed away to minimal effect. 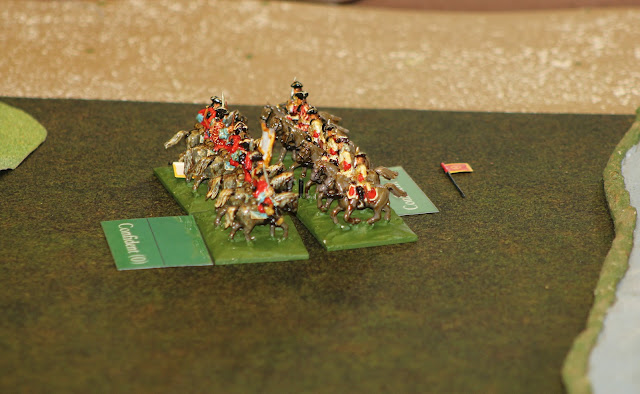 The opening conflict was a cavalry charge in the distance, where two new glossy units crossed swords. 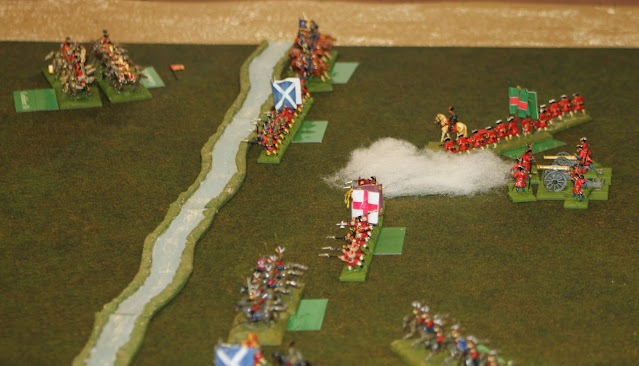 Anticipating victory, Join moved his infantry up in support. 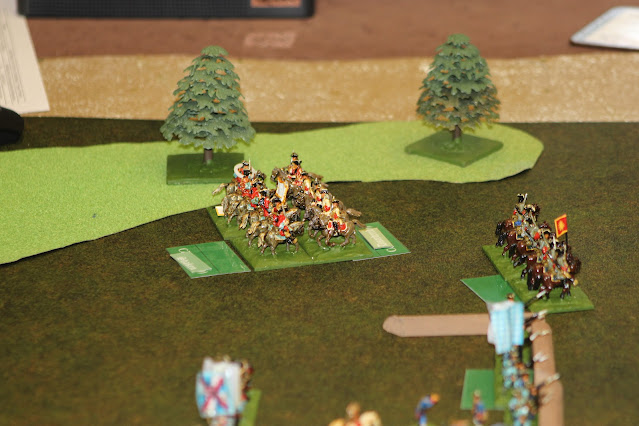 Jon won the first round of combat, and drove Ian's troopers back. 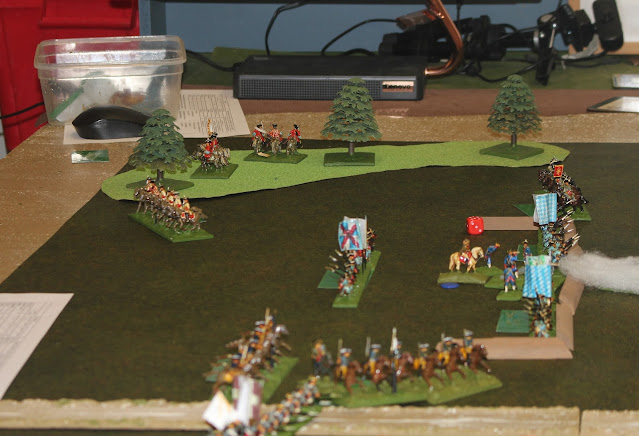 The next round of fighting saw Ian's troopers broken. The clear plastic pot in the background contained home made corn bread, supplied by Chris. Chris is a talented fellow, but this was not one of his successes.
. 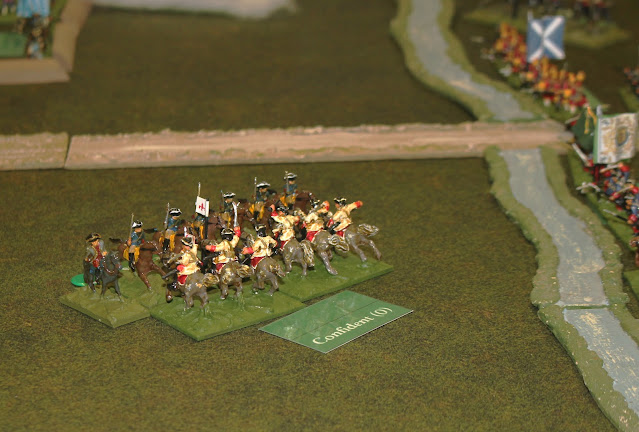 In the centre the French c-in-c lead his elite cavalry in a charge into the Hanoverian horse. The troop quality, denoted by the green tabs that should tuck neatly under the bases (really guys, how hard is it?). These are face down and only revealed when a morale test is taken. I dealt these out at random except for the French horse, which I had made "Fearless". Chris doesn't know this yet, as he led the charge personally, so did not need to take the test. 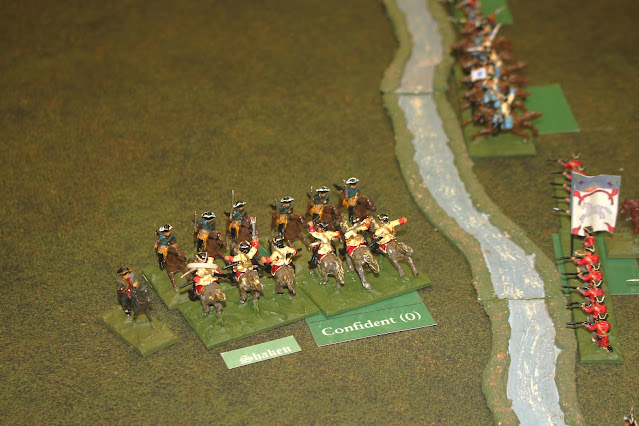 The French prevail in the charge, and the Hanoverians fail their reaction test and drop to "Shaken" status. 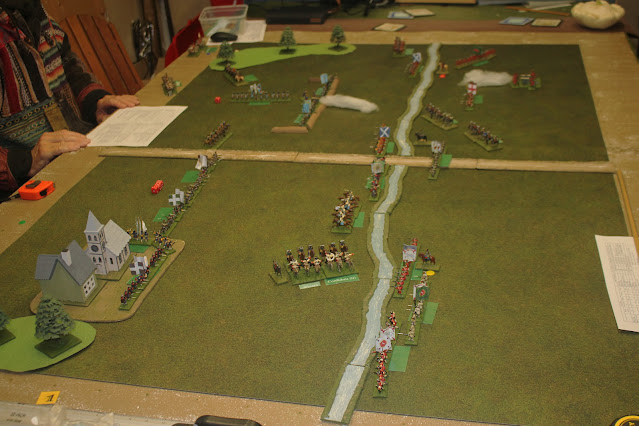 Jon is developing an envelopment attack on the fieldworks. Tim is pressing forwards in the centre, but is uncertain about how best to proceed. 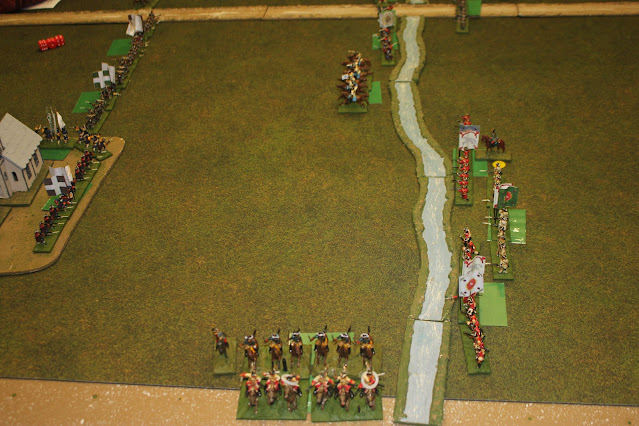 Another round of melee and the Hanoverian horse are driven off the table. 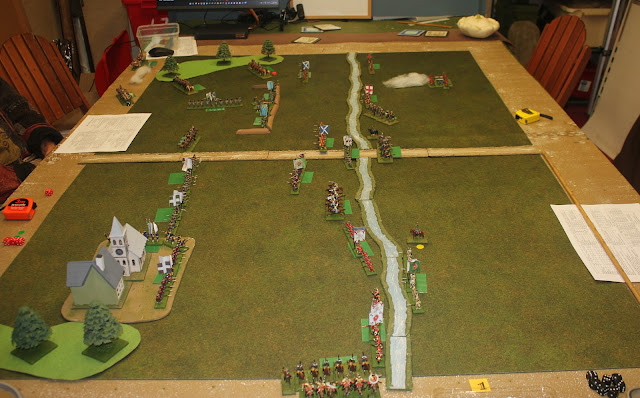 With his front cleared Tim advances across the stream. 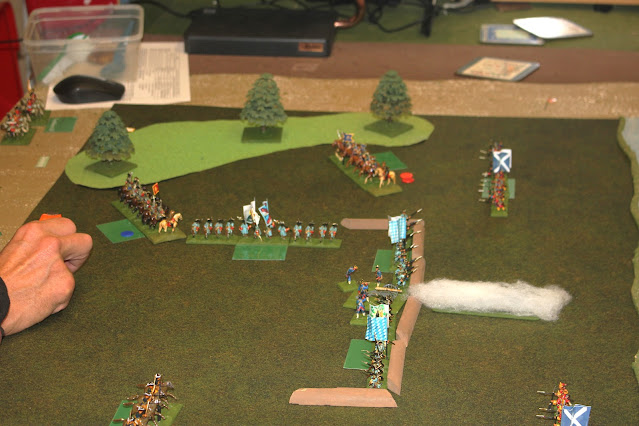 Ian has pulled up his reserve infantry to secure the flank of his field work. The remaining cavalry units face off. Jon has one off the table pursuing Ian's broken Bavarians. 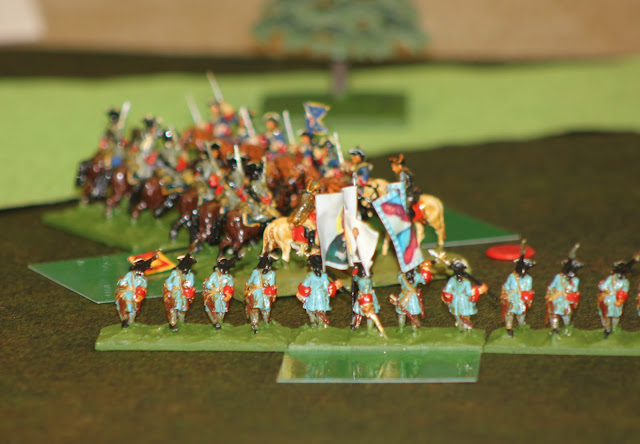 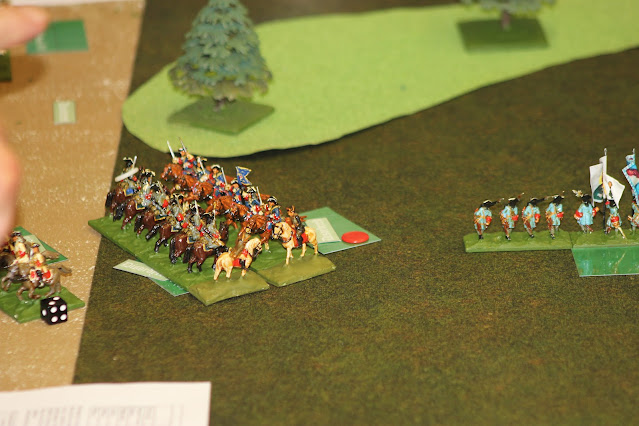 Jon's men prevail, and Ian's remaining horse is driven back to the table edge. This mat might not be big enough for this size of game. 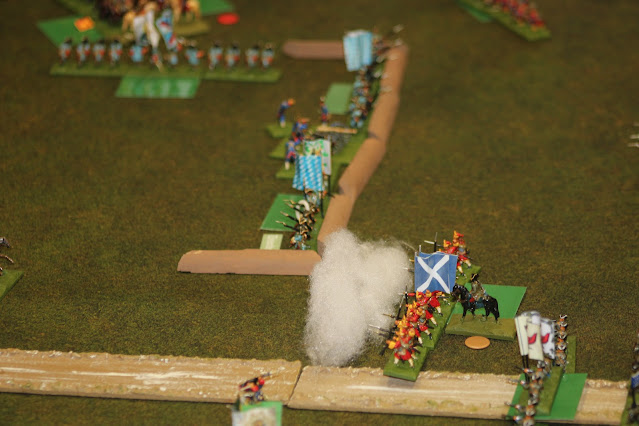 Jon's Scots Fusiliers close on the fieldworks and open fire. 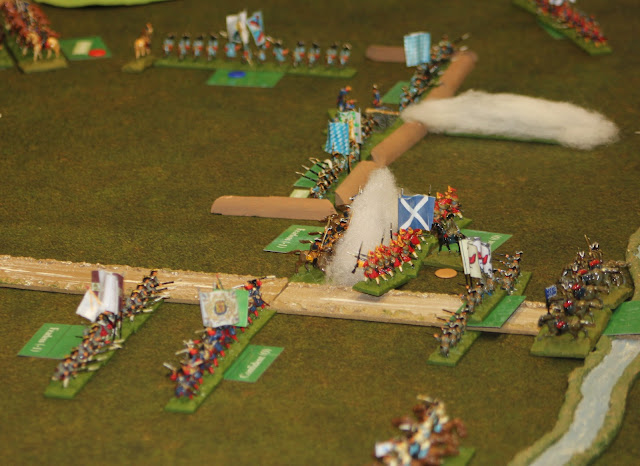 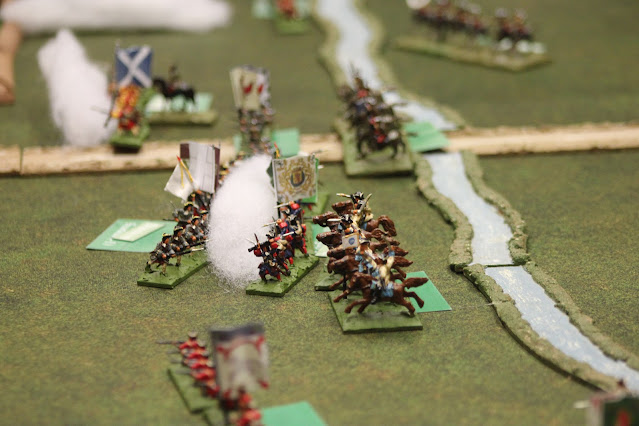 The French infantry charge home, pushing the Dutch back. 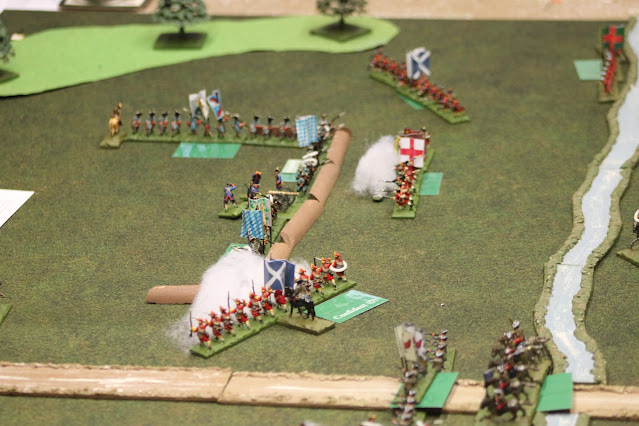 Jon now has two battalions attacking the fieldworks. His artillery has also finally hit a target. 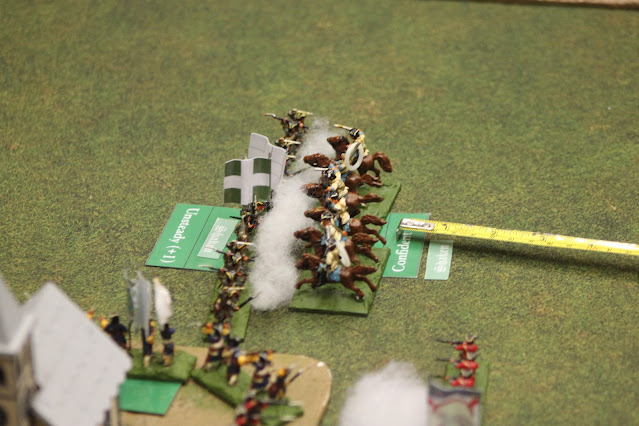 With his centre coming under pressure, Tim charges his Hanoverian horse into some French infantry. 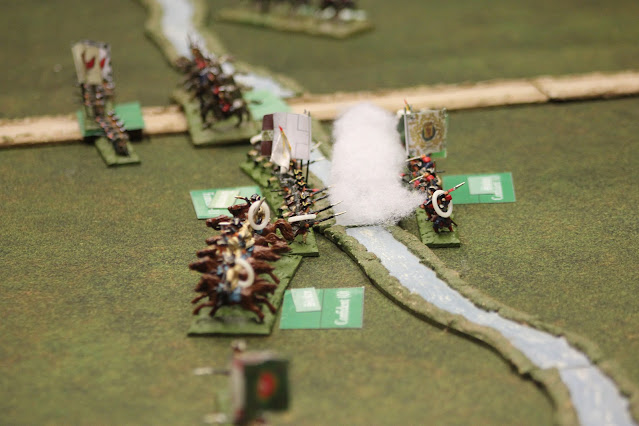 Their volley repels the horse, who fall back to their start position. 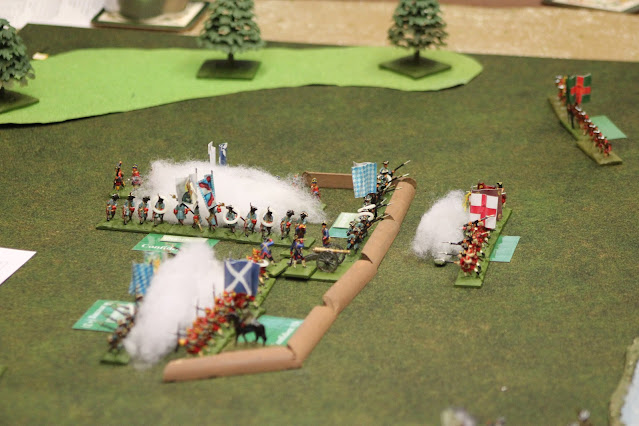 There's a picture missing here. Jon has swung a battalion round the flank of the fieldworks, delivered as volley and then forced the position. He has also forced his way in with his Scots. 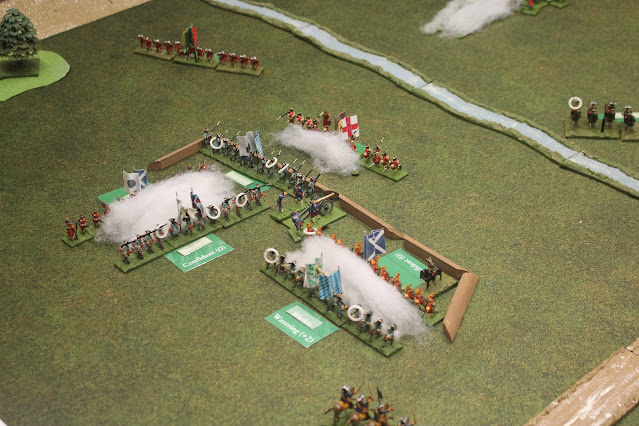 Ian was not helped by some poor die rolling, and also by it being revealed his right hand unit was "Wavering" in quality. 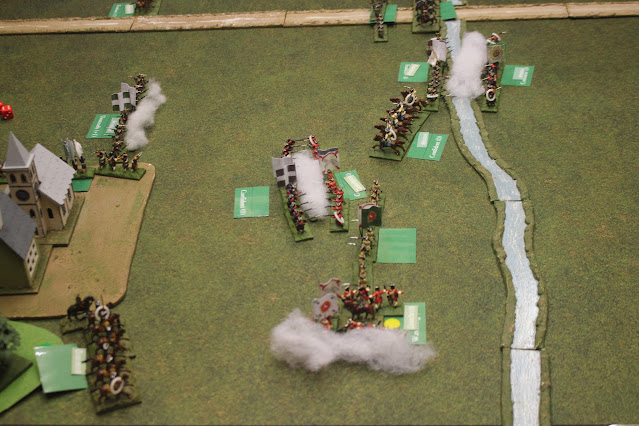 Chris' returning cavalry charge Tim's square, and are driven off - although it was a near run thing. 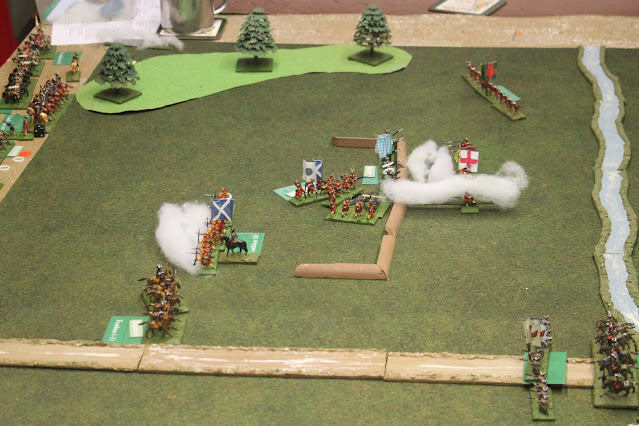 The Bavarians have completely collapsed. Tim is holding the superior quality French after his attack falters, so an Anglo-Dutch alliance win.
The game played okay. I was really rusty on the rules, although the game was much more satisfactory than the last outing. I think, coming back to it, that the turn sequence is clunky and needs a look at. Despite it being not a big game, the troop density was possibly too much, given the set up and board layout.
On a side note, I gave up my Zoom subscription a few months back, and have been using Google Meet. That's worked fine, only for the first time in this game we got a "your session will be terminated in 10 minutes" message. We resolved the issue by all logging out a the end of one or the other player's turns and logging back in again. I don't know when they introduced this limitation, but Google searches seem to indicate it was last year, so perhaps we've just been lucky.
Might as well revert to free Zoom, and use two cameras.

From Pike to Bayonet War of the Spanish Succession WSS