Richard gave us the next battle in his US/Mexican War campaign this week. He still has builders and decorators in, so we were playing on-line despite all of us living in a 10 mile radius of each other. 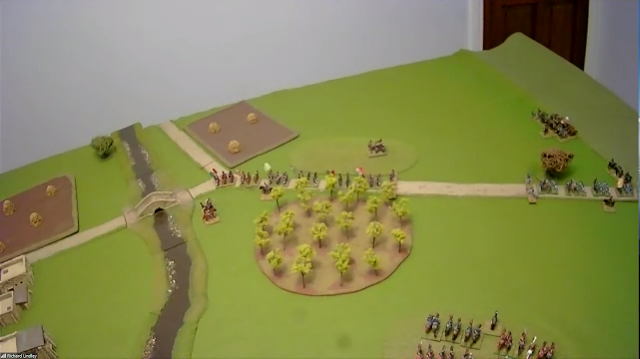 So this is the Battle of Picos Gemelos,1846. Set up as a five player game there were four of us. Me & Steve were Mexicans, Phil & Will the Northern Imperialists. We had a few camera issues as we couldn't see the whole table and Richard only ever runs one view point. The Mexicans are retiring towards the bridge - that's their infantry column on the road, covered by the cavalry on the hill. The US forces are coming on the right table edge. We have reinforcements coming on from the left.
Our orders gave us the choice of retiring behind the bridge/river line or turning and attacking here. The latter option looked good to me. We had a couple of hills to deploy on, and an olive grove to hide in. I had reckoned without Richard enforcing the Shako II command/order rules, that meant we had to take two/three moves to about face the infantry and deploy them. We did get our artillery on the hill so we could shell the US cavalry.  Alas the delay in turning the infantry meant we had hung them out to dry a bit. 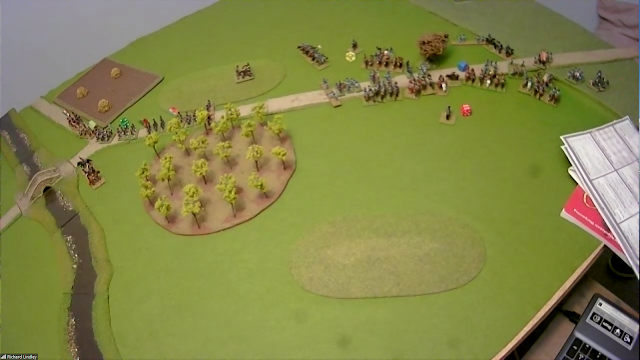 Much to Richard's surprise (??) I charged the US infantry in column with my cavalry. Based on troop Morale Values and the distance charged, I reckoned we had a 50/50 chance of catching two of them in column, and a 66/33 chance of getting one of the others and a 33/66 for the last one. That means I should break two almost certainly, and possibly a third. 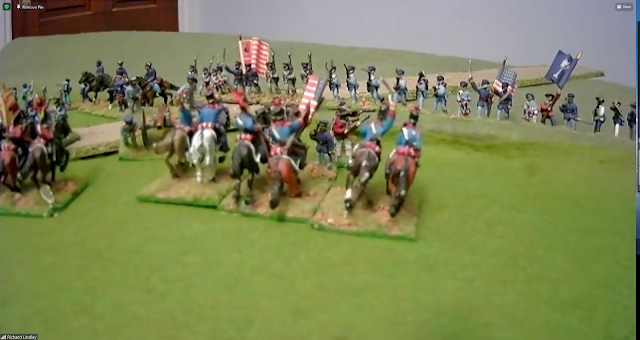 Amidst the calls of "I can't see what is going on", Richard gave us a thrilling low level camera angle. 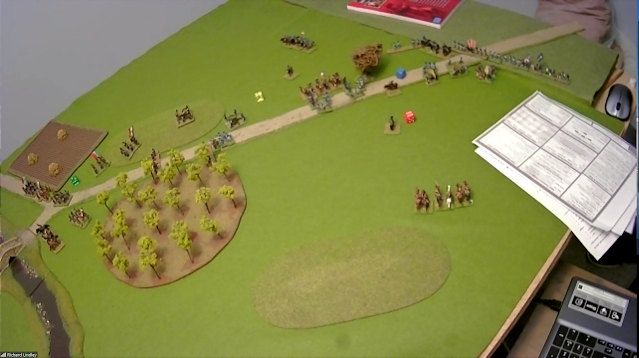 So it went like this. All of the US battalions formed a Hasty Square, except for one. The squares then destroyed all the cavalry -  shocking die rolls, didn't even get bounced - and in the other combat I was driven off by a march column. That's my chaps standing alone in a field. 75% Divisional casualties. Under Shako the rest of the Division retires. That's my command gone.
Meanwhile Steve is doing his best to turn his infantry around and get into defensive positions. We (well, mostly I) have really got this badly wrong. 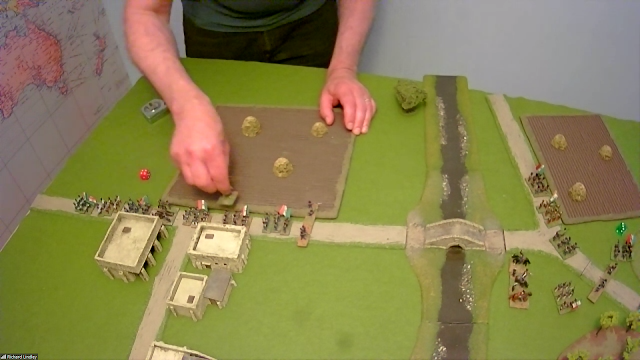 Lucky for me, I'm back in the game with Mexican reinforcements, marching slowly up the road. 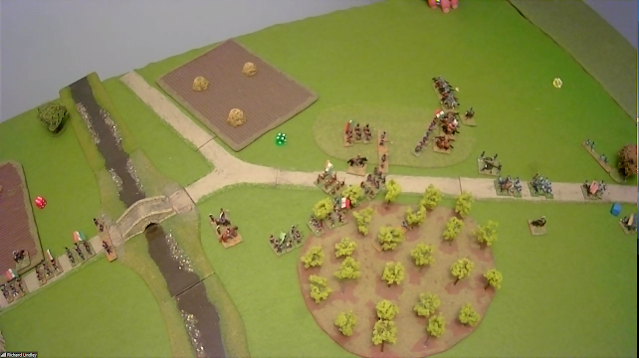 Steve is gradually getting into position. We have lost the guns on the hill, and looking at the odds for forming a Hasty Square with our troops, Steve opts to stay in line and shoot the cavalry off.
In the olive grove Phil launched a bayonet charge up the road, and Steve was able to surround him with three battalions. 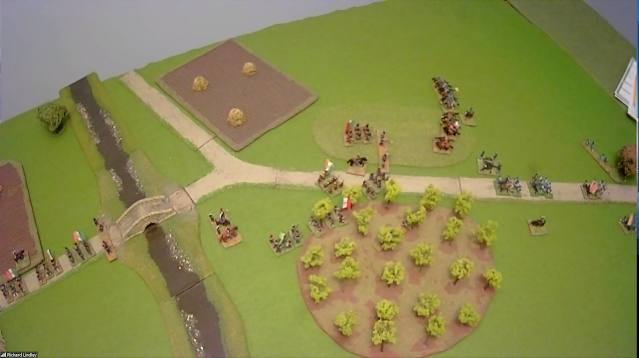 He nearly did it too. He inflicted casualties, and was up hill. Alas he was undone by a 1:6 combat die roll.
He does win the fight in the olive grove, however. 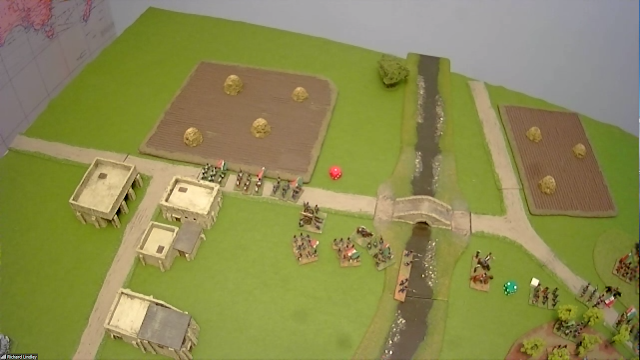 The reinforcements start to deploy on the river line. Off screen Phil has a division rushing across open ground in an attempt to cross the river first. 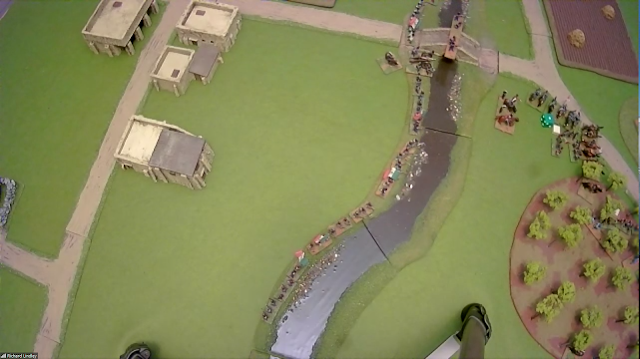 See! All neatly lined up.
On the right you can see Will's cavalry launch a charge on a "Staggered" square. Elsewhere Phil has charged with his infantry on the road, and is winning the combats. 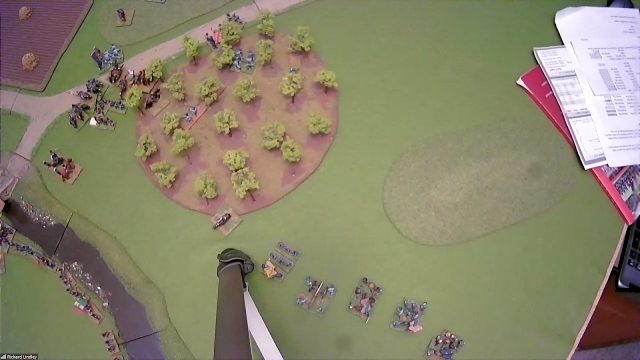 Steve's Division loses another unit or two and breaks as well. Phil's men are approaching the river, skilfully avoiding the camera tripod.
It doesn't matter, as despite not having a scratch on my new Division, our army is broken.
Well, that went badly didn't it. Everything that could go wrong, did go wrong, from our decision making to our die rolling. We should have pulled back hastily behind the river, which is what Richard intended, and I should have kept the cavalry as a threat rather than committing it early.
In our post game discussion I suggested the "It's Getting A Bit Chile" might be adapted for the period, but Steve said why not "Taiping Era"? I checked back and saw that I thought the same last time we played. Looking at the rules and considering some of the Indian Mutiny games we've played, I think that we could use TE practically unchanged. I hope to bring you that game in the future.