A visit from an old friend, and a game of Ivan

One of my duties for the Northamptonshire Battlefield Society is to find speakers and get them to come and talk to us. Luckily I know one or two people who will talk abut something a bit different. One of them is John, a retired senior civil servant, who has spoken to us in the past about the SOE/OSS bases in the county during WW2, and the implications of the Cuban Missile Crisis for Northamptonshire. This year he came and spoke about Nazi spies who were parachuted into the county (there were two - it didn't end well for them).

As John has to come a little way, Mrs T and I put him up over night, which means there's time for a game. He was very keen to have a go at "It Rolls for Ivan", so I took the opportunity to put a game on and play it as it was originally designed, as a two player face to face game. Don't get me wrong, it works great as a multi-player and/or Zoom streamed game, but it is nice to play it as I intended, and also play myself, instead of umpiring. 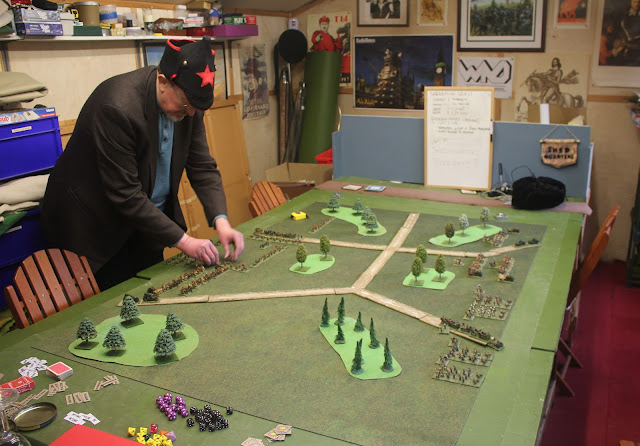 We have an encounter battle, with a couple of regiments of Red infantry, plus supports, up against a smaller White force, but of better quality. I eschewed the armoured train and went for simple terrain as it was John's first game. He selected the Reds, mainly so he could wear the black Budnovka. I love that hat. 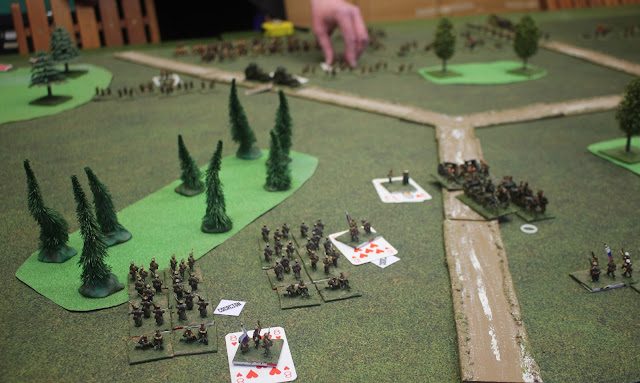 An early push on my right flank. Artillery well to the fore. I missed a trick by not shelling the infantry in the centre to hold them in place. Instead I tried to knock out the armoured cars with direct fire, and failed miserably. 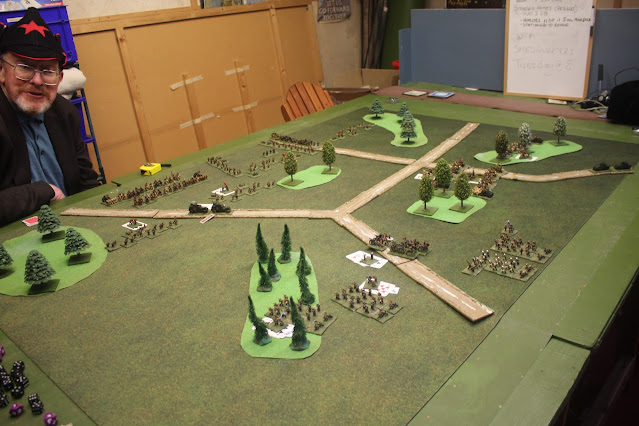 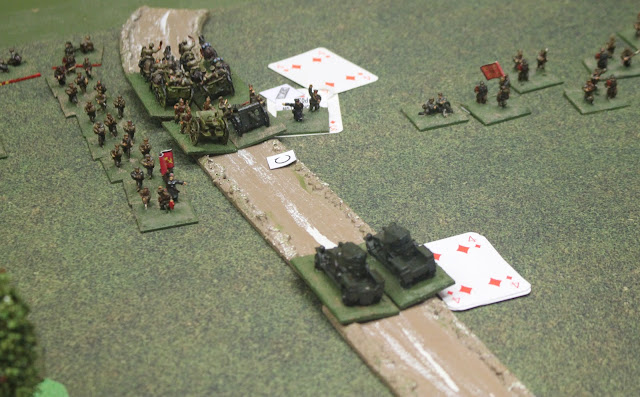 John deploys his guns, but before he can open fire, I rush them with my armoured cars. There follows a round of ineffective MG fire. 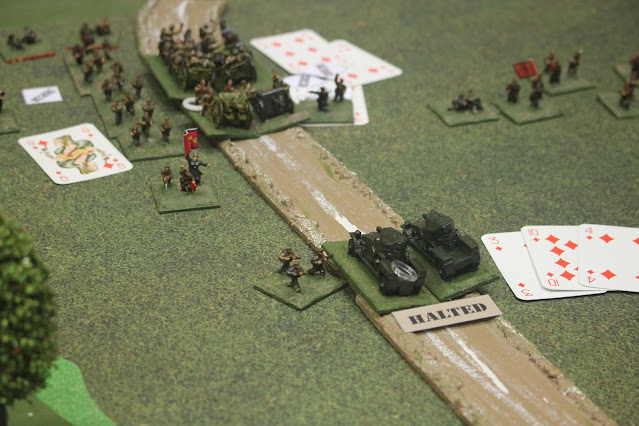 A brave group of Red soldiers close assault the armoured cars. One of them is effectively immobilised. 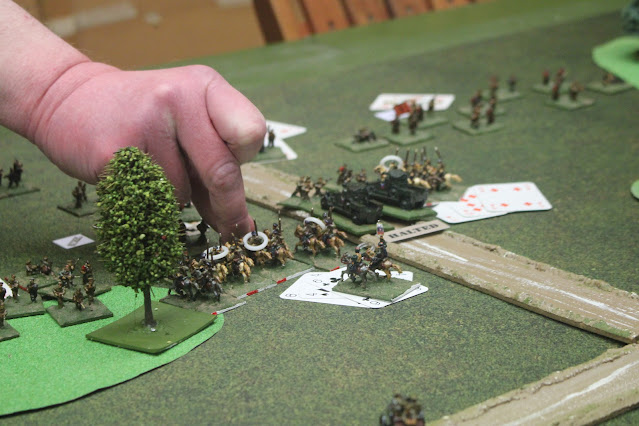 John had brought up the rest of the infantry battalion to surround my armoured thrust. I countered with a charge from my Cossacks. 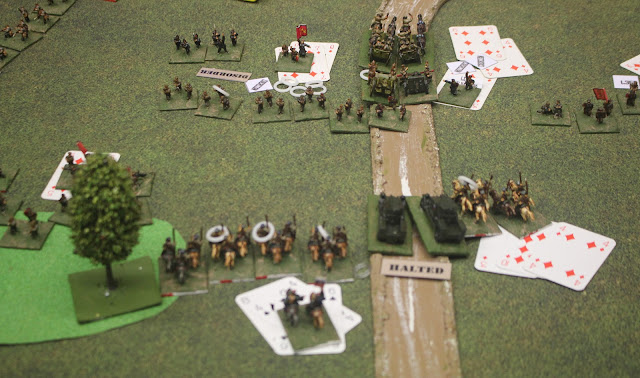 The Reds are driven back in disorder. 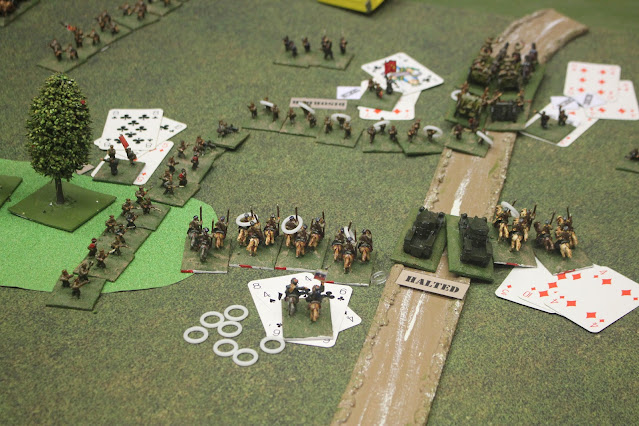 John reacts by forming a firing line with one of his other battalions, and opening fire. It doesn't look good. I may have over extended myself. 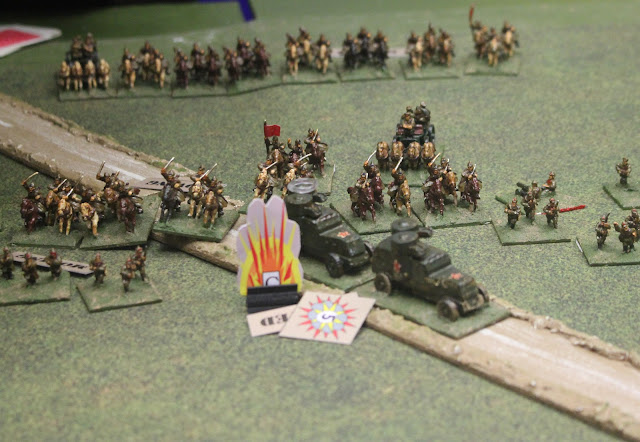 I receive some off table support. A Heavy Armoured Train in the vicinity plasters the armoured cars, before steaming off. 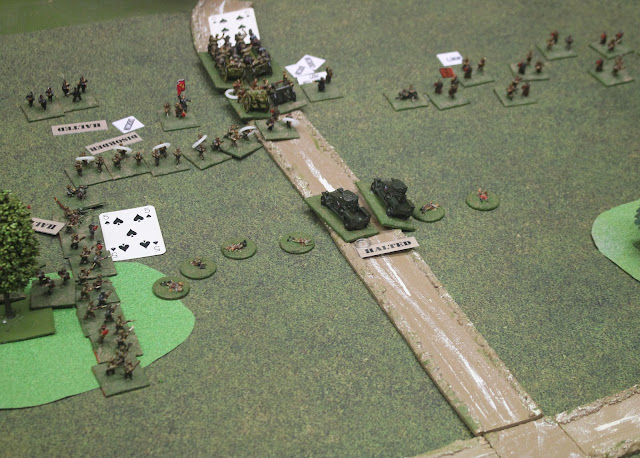 As I feared, my Cossacks don't survive the hail of bullets from the wood. 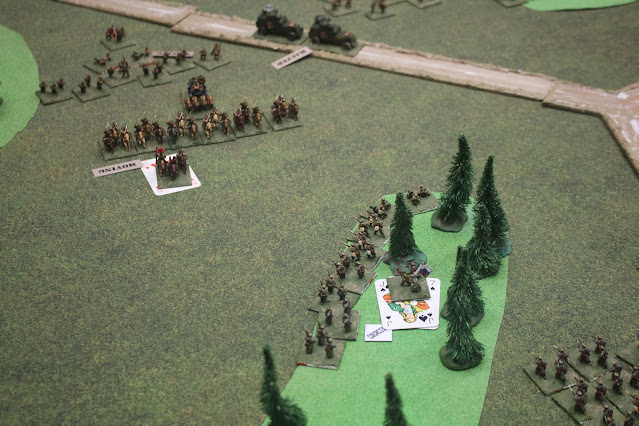 On my left I deploy one of my lower quality units in a strategic wood to secure that flank. 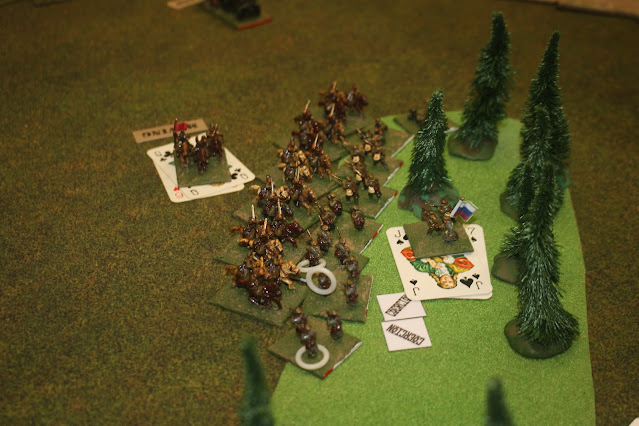 Keen to see how these things work, John charges them with some Red Cavalry. I don't have a picture of what happened next, but it wasn't pretty for the Soviets. 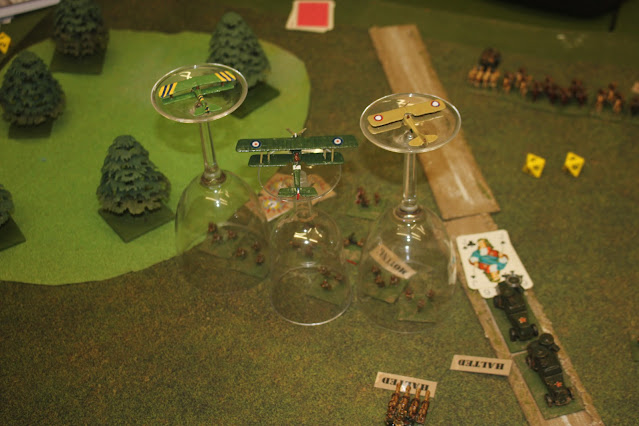 What's that sound in the distance? Why, it's the White airforce...supported by a suspiciously British looking bomber. Those Imperialists will stop at nothing to stamp out the Peoples' Revolution. 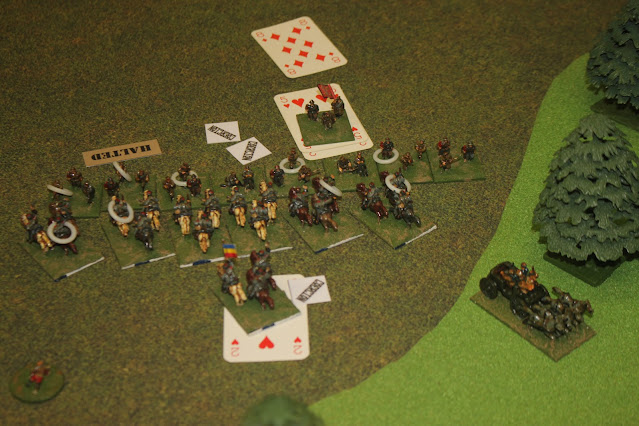 Over on my right, more of my Cossacks emerge from a wood, surprising the Red conscripts protecting that flank. The conscripts are driven back in panic. The Cossacks are able to swing round and overrun the gun line. 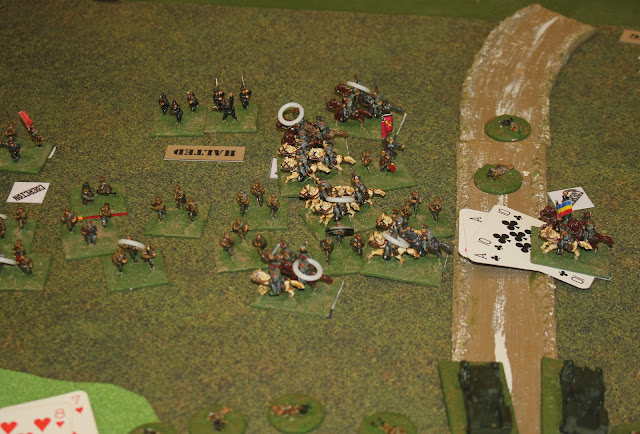 Having charged through the guns, they then career into some Red infantry in skirmish order. 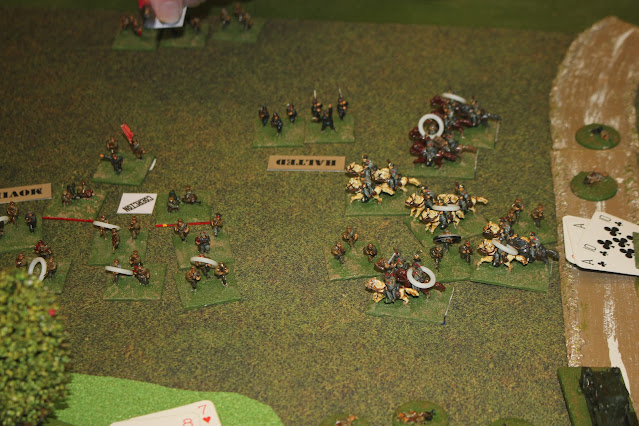 The infantry are slaughtered.
Round about this point we had to suspend proceedings after a few hours play, as it was time to grab some quick dinner, and then head off for the Society meeting. This was a really good event. We had over 30 people in the room, and more than 20 on-line, because we live stream our talks for members who can't make it for whatever reason, and our members who aren't local. We do 10 talks a year on a variety of subjects of interest to anyone with a general interest in history, but mostly with a military leaning. Our programme for next year will be out soon. If you want to see what you missed, have a look at our website. Membership is £20 a year, which is good value at £2 per talk, plus you get a quarterly newsletter. And a badge. All proceeds go to supporting our work preserving battlefield heritage in the county, so you also get that warm glow you get from helping out a good cause. Details of how to join are here.
Anyway, back to the game. 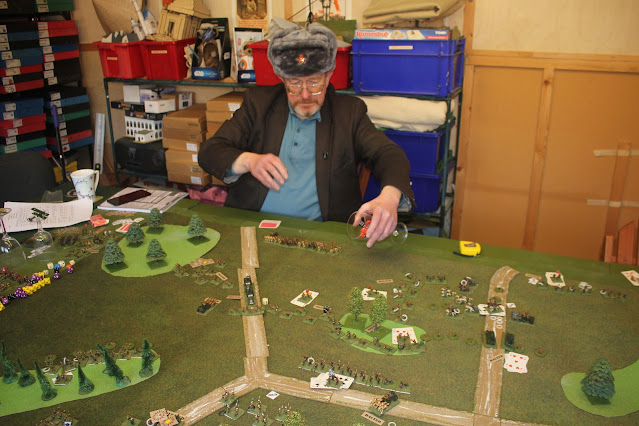 You can tell we're on a different day, as John has changed his hat. As a good Champagne Socialist, he is using a wine glass as a dice cup. He has occupied the wood in the centre, and has swung round an infantry battalion to hold off my Cossacks rampaging in his rear. 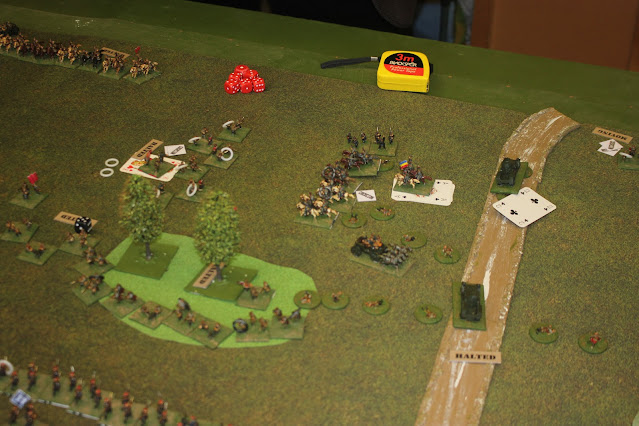 My Cossacks are actually in a bit of a fix. They have heavily armed Cheka on their flank, and have been forced to reorganise in order to survive. They now have a crop of black hit rings, signifying permanent damage. 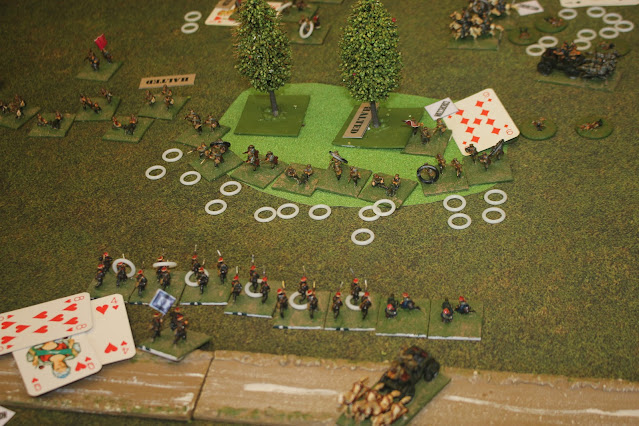 I bring up one of my Officer battalions to deal with the Reds in the wood. They unleash a deadly volley. The hit rings are laid out for the photo so that you can tell they need to re-organise...alas for them I've just played another card on the Officers, and they charge into the wood. 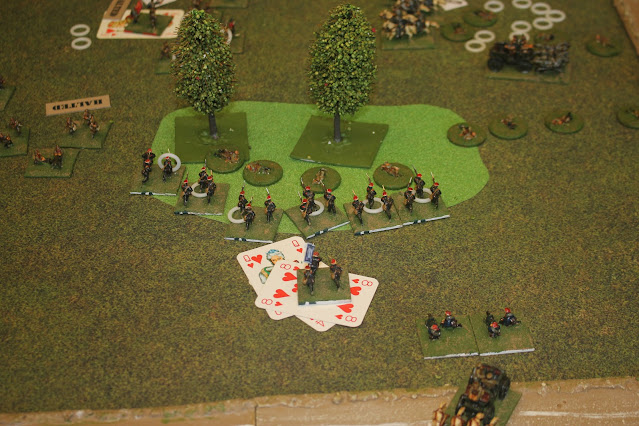 The Reds are slaughtered to a man. 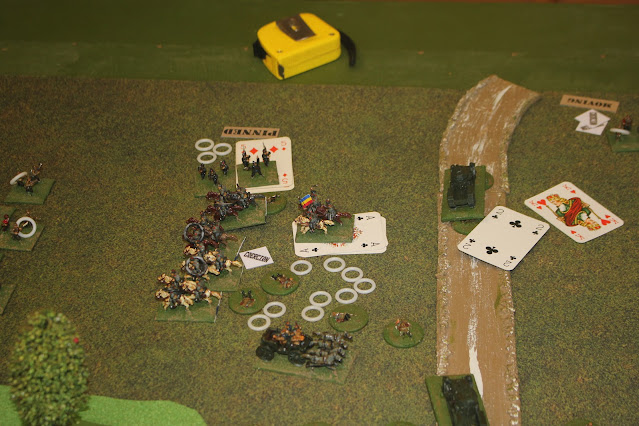 At the back, John is able to open fire on my Cossacks before I can do anything else with them. They have taken so many hits that I can't even reorganise them out of trouble. This is despite support from my armoured car, which pinned the Cheka with well directed MG fire. It is also a consequence of me prioritising the attack in the centre, rather than getting the Cossacks out of danger. 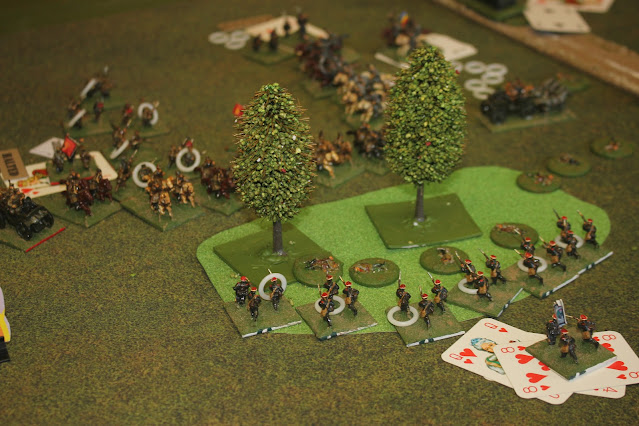 What's this? As my Officer battalion catch their breath in the wood, the thundering sound of hooves can be heard. 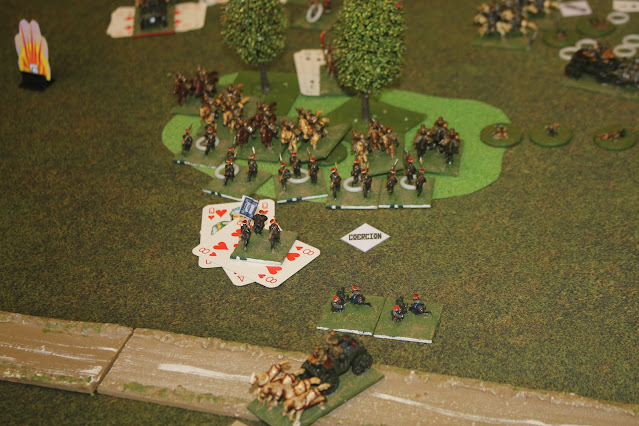 Red Cavalry surge into the wood, surprising my brave fellows. 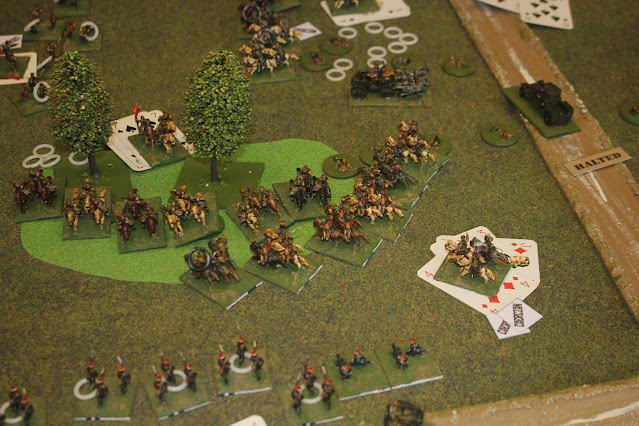 We put up a brave fight, but are driven out of the wood. How can I respond? With a whoop my remaining Cossacks counter charge. 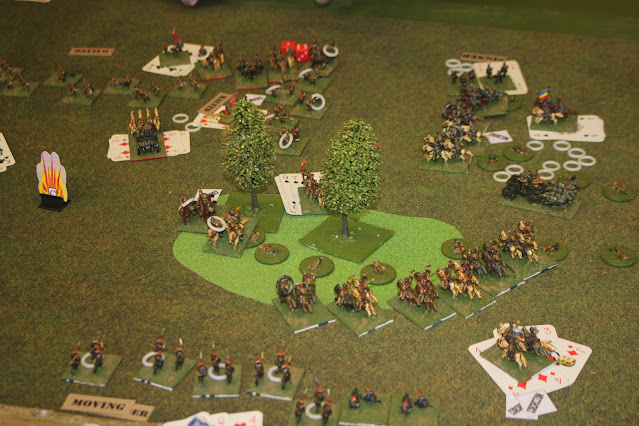 The Reds are thrown out of the wood with heavy casualties. The game has tipped decisively in my favour. 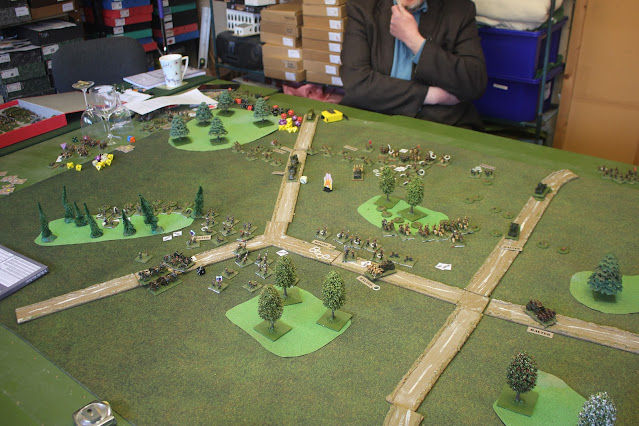 John has very little left he can do anything with. He has received some reinforcements, with an extra armoured car arriving. 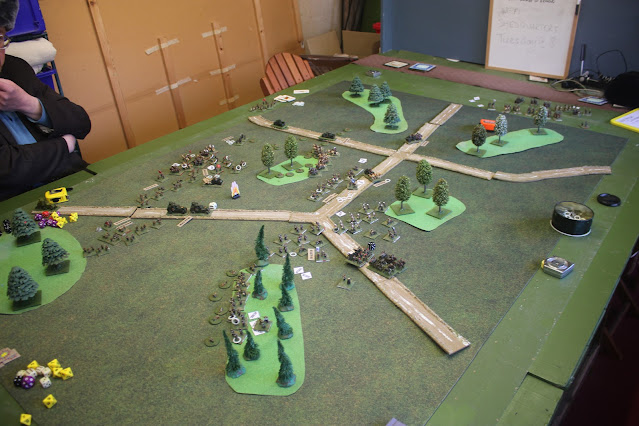 I've got him hemmed in the corner, and I can afford to hold off for a turn and reorganise, whilst I pound him with my guns. A White victory.
Played over two sessions that was about four hours play. We got in four full turns, which is 12 activations for most units. As John observed, there was a lot going on. Otherwise, what did he think?
Well, I'm pleased to say he was effusive in his praise, and even bought a copy of the rules off me. One of the best games he's played in recent years, which captured the period very excellently. Lots of flavour and relevant detail. I was really quite chuffed.
Rules available from Amazon. See the tab above for more details. Treat yourself for Christmas.