10 years ago, last February, I was made redundant from my job of nearly 30 years. Apart from all the angst and damage to mental health this brought, on the upside I got a fat redundancy payment, part of which I used to have Shedquarters built. It was unveiled to the world in December of the same year, with an inaugural game refighting Cannae, which pitted Chris K and Phil against one another in an epic AMW double sized game.

A decade on, and devoid of any further ideas, I restaged the game. More or less. There's a report of the encounter here. For some reason this is a post where Blogger has lost all of the pictures. I do not know why. Phil & Chris returned to push some plastic, and online we had Jon, Ian, Will, Dave and Steve. 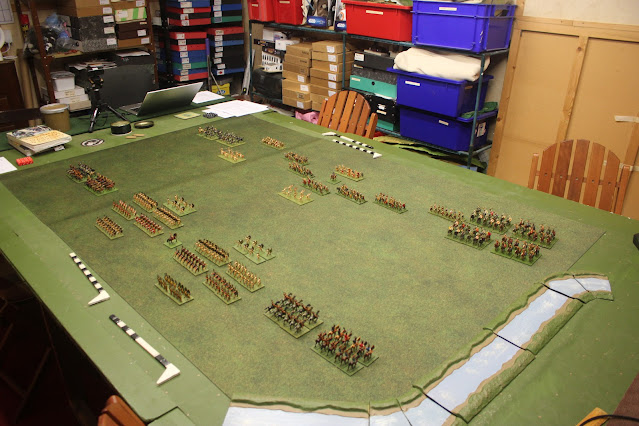 Romans to the left, Carthaginians to the right. Phil pushed for the Romans, Chris for the Carthaginians. Will and Jon were Varro and Paullus, respectively, and Dave, Ian and Steve were Hannibal, Hasdrubal and someone else.
We were using Neil Thomas' AMW, but with inhouse mods. There are some rules for Generals, an interpenetration rule for light infantry, and specifically a rule for the Gallic warbands that allow them to trade hits for ground. The troop classifications were changed as well, as the basic army lists are very pro-Roman if Hannibal doesn't have any elephants. 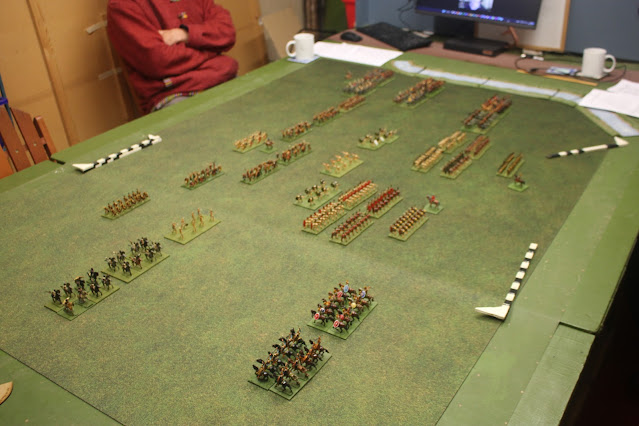 Everyone started off closing the ground between the armies, except for Will, who held his cavalry back on the left. Chris, who has a tidy frame of mind, straitened out the curve in the Carthaginian set up. 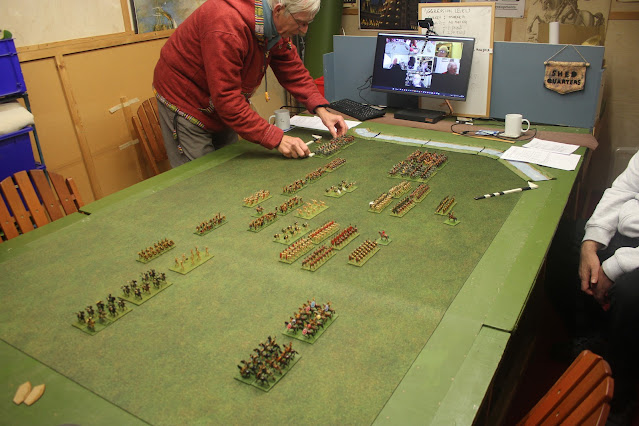 The Roman right looked like it would be critical. Hannibal has massed his cavalry over there, and has a 2:1 advantage. If he can hold his right with the Numidians, then he should be able to envelope the Roman right flamk. 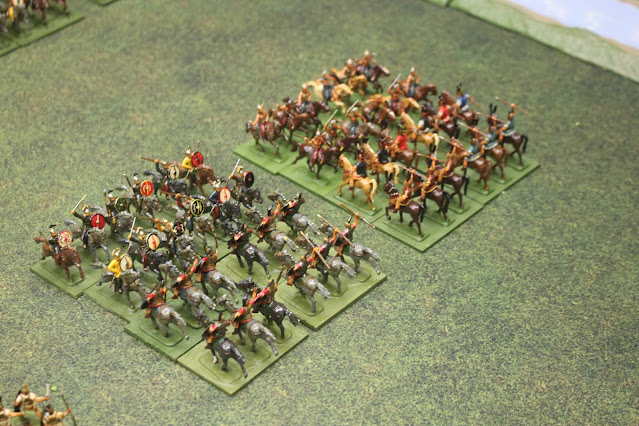 A titanic clash of cavalry commences. One of the criticisms of AMW is that using the base combat values, cavalry melees can take quite a while to resolve. This proved to be the case for this game. 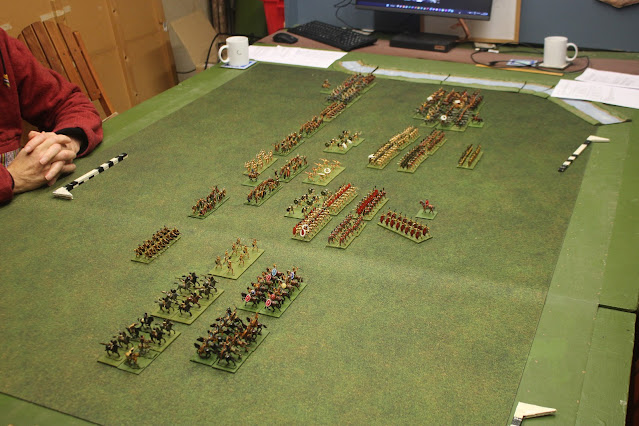 There is some skirmishing going on in the centre, and the Romans are coming off worse. Will is worried about his left, and wheels his Triarii off to shore up that flank. 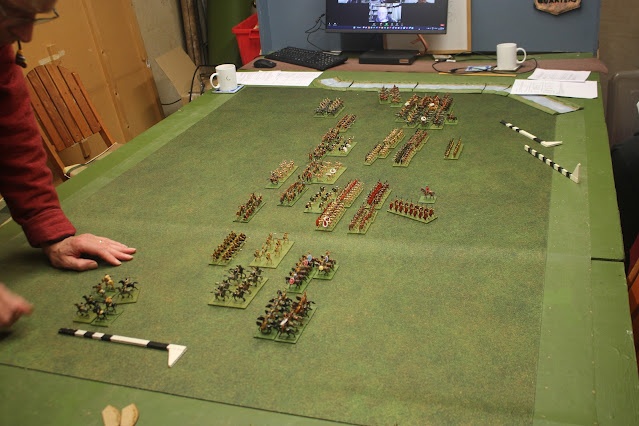 There's some clever measuring gong on over on the Carthaginian right, as Steve, under advice, is attempting to keep his distance from the equites, whilst still showering them with javelins. 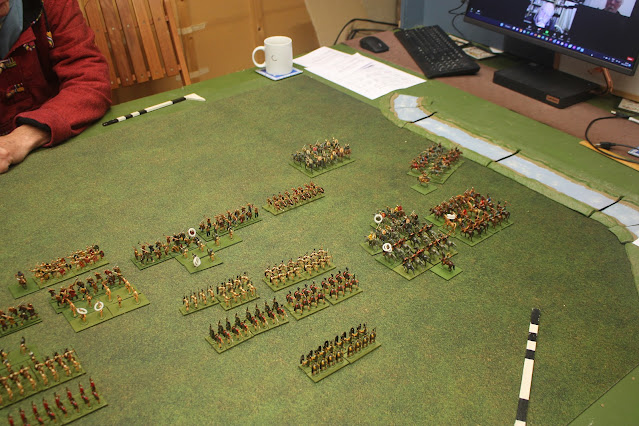 Jon tries to tip one of the cavalry melees in his favour, by adding Consul Paullus to the mix. Ian tries to work one of his reserve units round the Roman right. 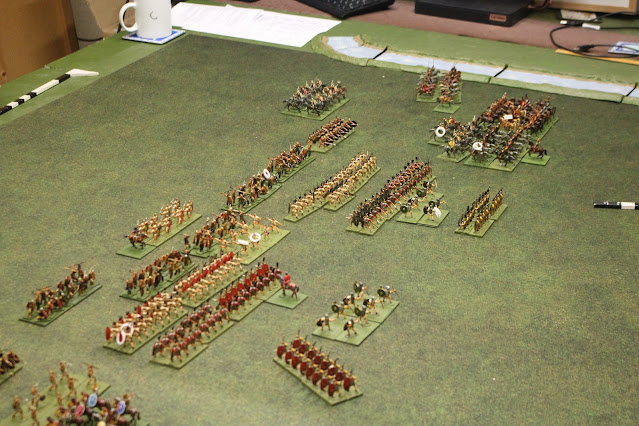 The velites have dropped back to allow the heavy guys to have a turn. Dave's slingers have done some real damage on the right hand legion, commanded by Jon. 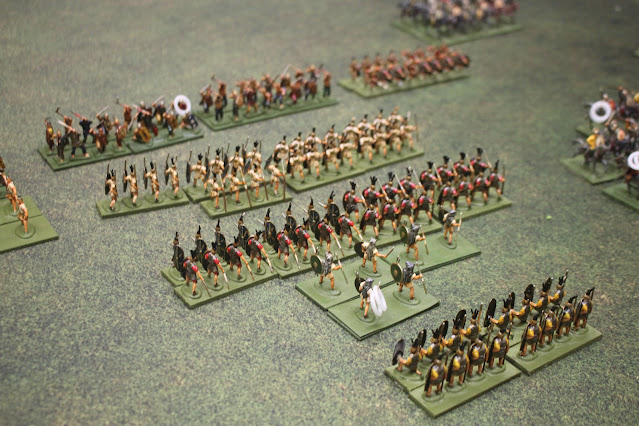 They look formidable, those Romans, don't they? What could possibly go wrong? 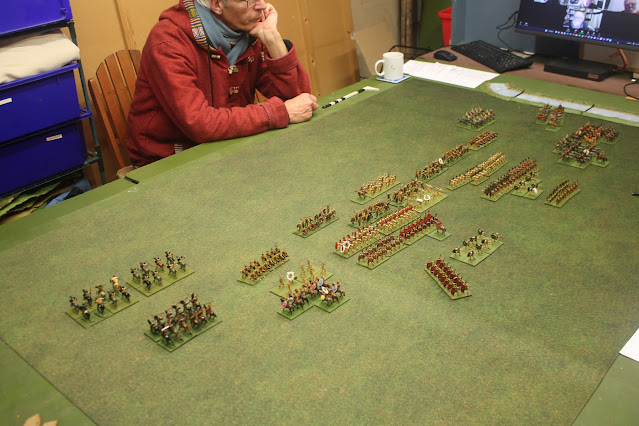 Will's equites have taken some hits from javelins, but he has caught those pesky light infantry. 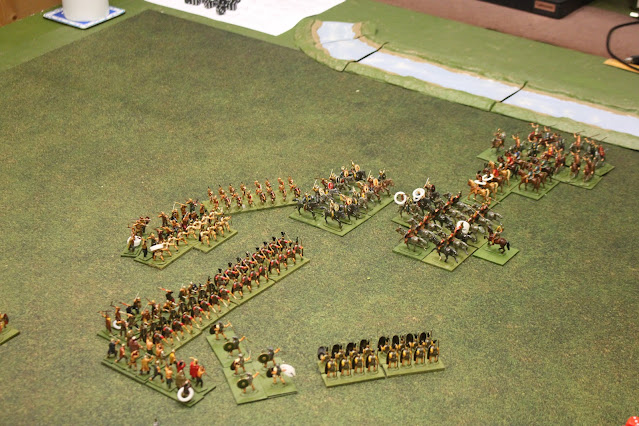 Out on the right I'm a picture or two behind, but it isn't going well for Jon's infantry. he's lost a unit of hastati, and the Gauls have crashed through to get a 2:1 on the principes. His cavalry has done okay, and seen off one Carthaginian unit, and is about to dispose of another. However, his flank has been turned. 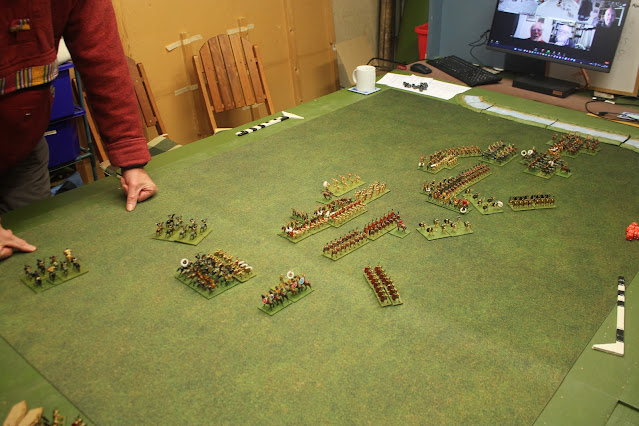 Will's infantry is doing much better, and he is steadily forcing the Gauls back. His cavalry have also drawn away the African veteran infantry, who should now be turning in on the Roman foot. 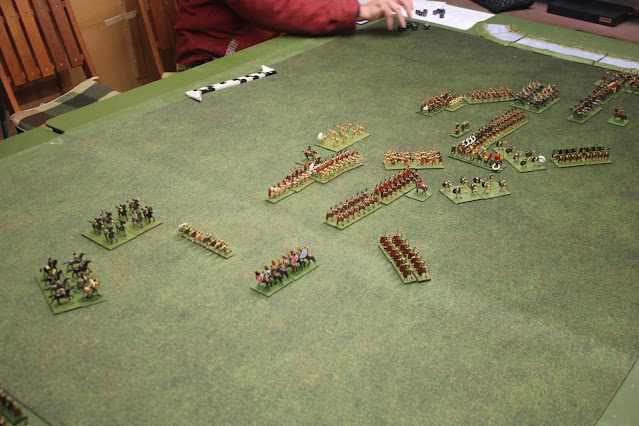 It costs Will a unit of equites, but it means his infantry can make real progress. Hannibal himself has joined the fray to stop his centre collapsing. 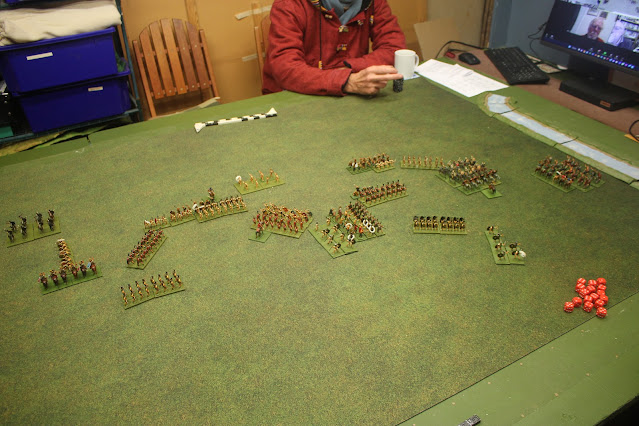 Will does indeed break through, and is able to send his principes left and right to cover his flanks, and prevent a breakthrough by the Scutari, who Dave was keeping in reserve. Jon's cavalry are just about holding on, and his infantry are starting to fight their way clear. 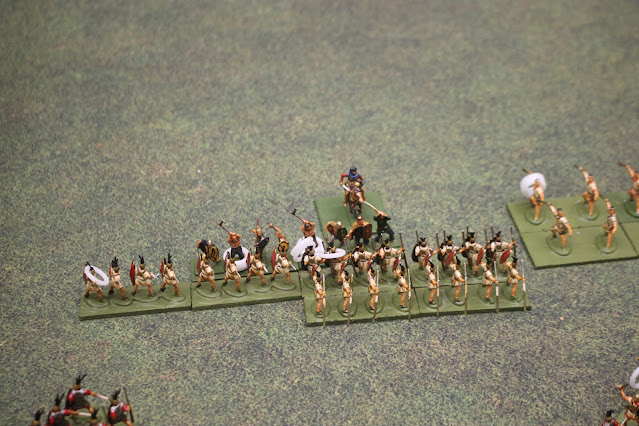 Hannibal's centre is on its last legs. The ability to trade hits for ground has kept them in the game longer than expected. 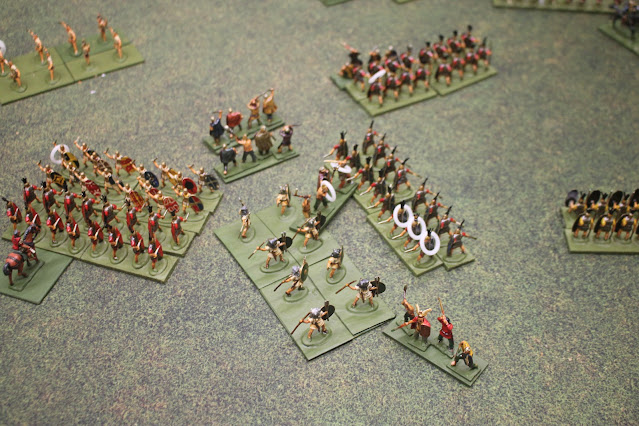 Dave had got a mini-breakthrough with one of his warbands, but Jon was able to turn on him and take him from behind with the velites. Or it might not have been Jon by this point, as he and Ian dropped out due to connectivity issues. 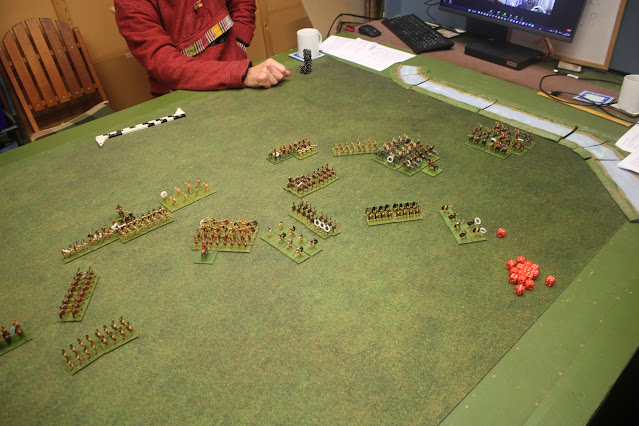 If I was using casualty markers to indicate expired units, the table would be covered with them. 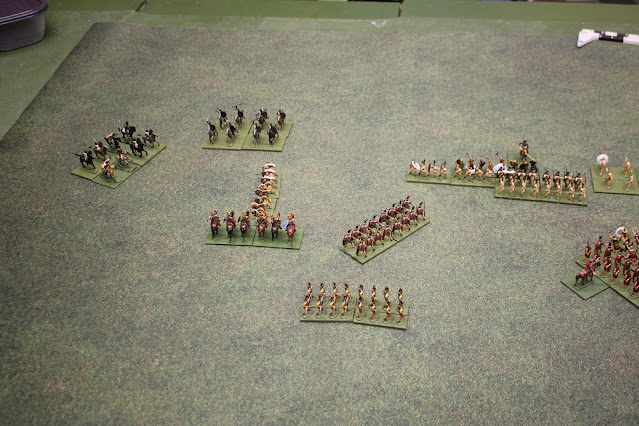 Looks like the African veterans on Steve's flank are going to be destroyed. 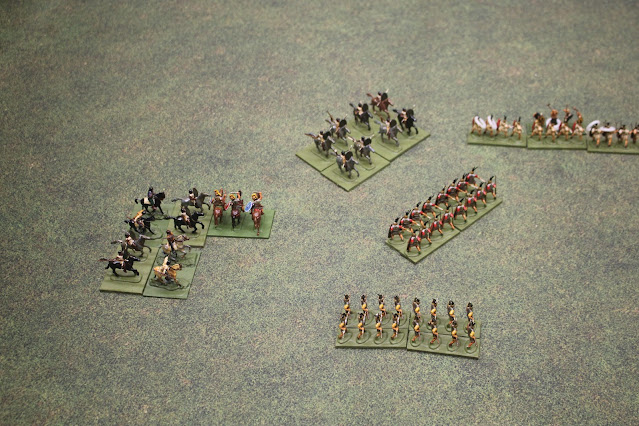 They are, but not before Steve's Numidians have darted in to cause the equites some problems. 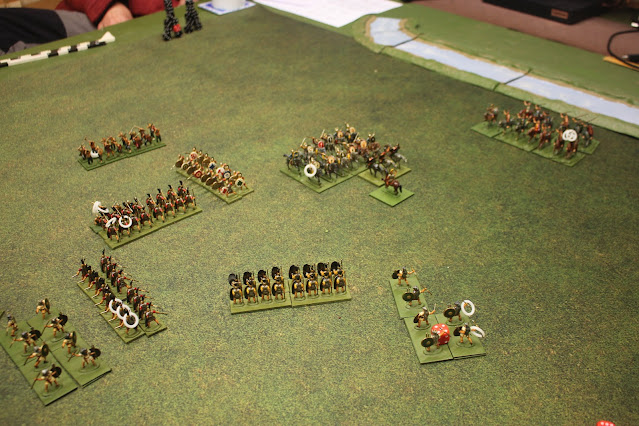 On the Roman right, the equites are down to one base, but they have done a magnificent job holding up the flanking manoeuvre. The other African veterans are poised for a flank charge on the principes. 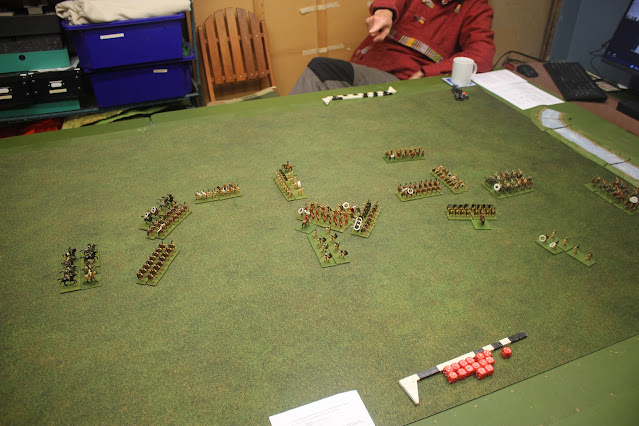 Will is faced with the challenge of fending off light horse with heavy foot. Not an easy task. One of his cohorts, however, has finally broken through, and is heading for a table exit. In the centre, Dave's Scutari are caught in the flank. The scent of Roman victory is in the air, unless Ian's cavalry can pull something out of the bag. 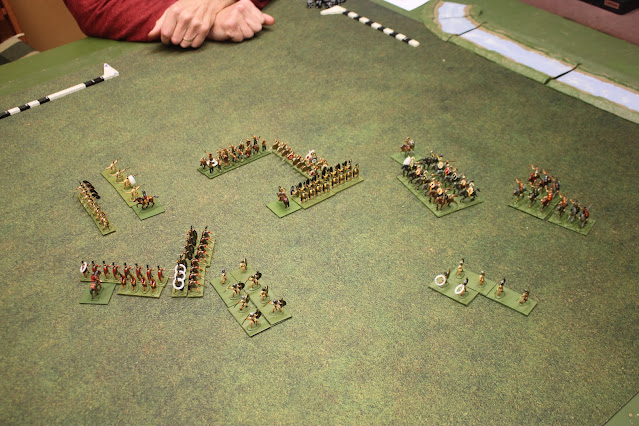 Right. What's happened here? The Scutari are gone. In the centre of the picture a unit of principes has been caught front and flank and has been removed. However, the triarii have got the Africans in the flank. 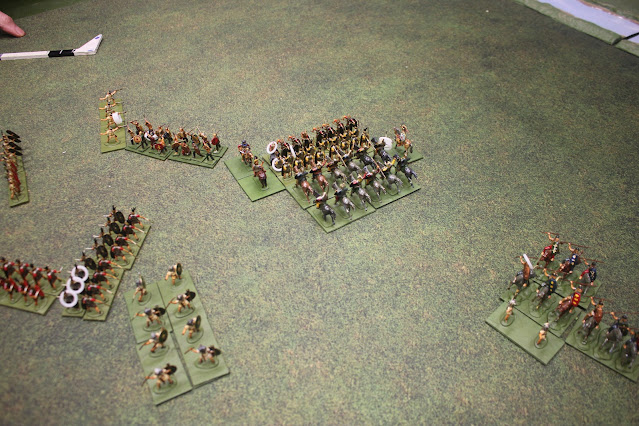 And then some of the Carthaginian cavalry charge the triarii in the rear! If you look closely you can see how important this melee is, with three Generals involved. 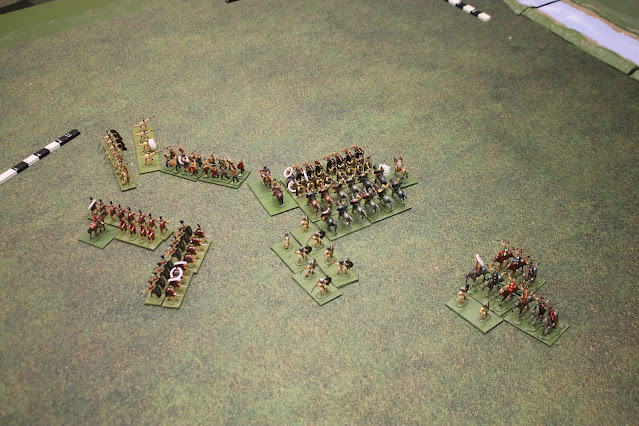 With the remains of a velites unit holding off one cavalry unit, the others take the Carthaginian cavalry in the flank. It's all kicking off down there. 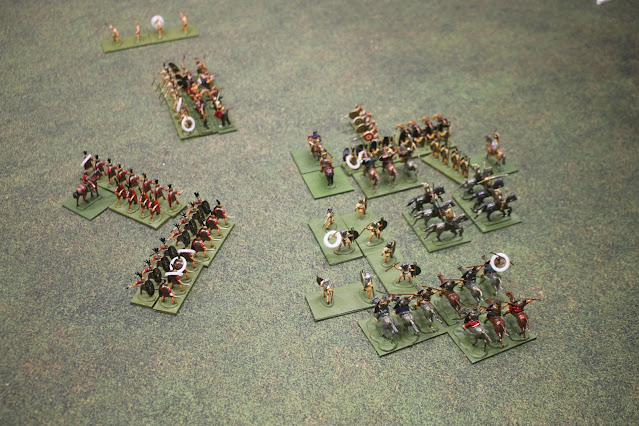 There's bases being killed all over the place, but miraculously all the commanders survive. Both armies are teetering close to their break point. 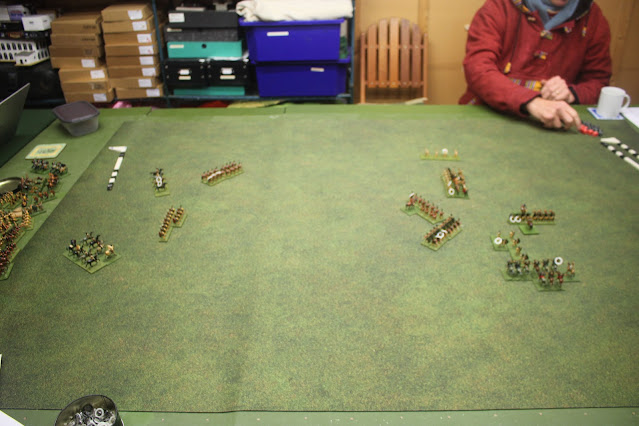 And then it's all over. Will marches a battered cohort off the enemy table edge, which causes the Carthaginians to remove two units, breaking the army.
Phew! that was exciting, and tense. It was a pity that I had IT issues again. Can't work out why. Same configuration as last time we were in SHQ. Still it was a fitting game to celebrate 10 Years of Shedquarters gaming. Many thanks to all those who have come and played over the years. It's been great.
Best money I ever spent.