Wargaming for Grown-Ups Publications will publish full sets of wargames rules as discussed on the Blog of the same name. The aim of the rules is to be specific to a period and not to provide bland, generic rules. The aim is to produce original, easy to understand rules, with new mechanisms and concepts in an affordable format.

The rule books are written in clear English, using a readable font and layout. The rules include appropriate diagrams and examples, rather than being overwhelmed by toy soldier eye-candy. Where possible, as in the case of  all publications so far, the back cover of the rules will be a Quick Reference Sheet. Queries and questions on the rules can be posted as a blog comment, or to the email address in the rules.
Dicing With Death 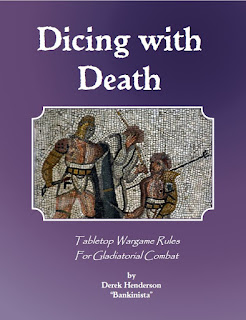 "Dicing with Death" is a set of quick play gladiatorial rules, written by experienced wargamer Derek Henderson. Played on an off set square grid (you can use hexes if you prefer) the game has an original combat system that uses both luck, skill and bluff. Players each have a set of 5 dice, and the innovative combat system uses concealed dice rolls as the players attempt to outscore their opponents using holds and re-rolls based on the gladiator’s skill level. The game covers all the known gladiator types who fought each other from the simple secutor with a shield to gladiators with whips and lassos. Record keeping is simple and kept to a minimum. The rules include a straight forward career progression system for both individual gladiators or training schools. Ideal for a quick game in an evening or a prolonged campaign over several meetings. As with all "Wargaming for Grown Ups" rules they include a comprehensive Quick Reference Sheet on the back cover.

It's Getting a Bit Chile 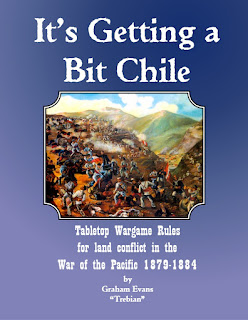 Disappointed by generic rules for the mid to late 19th century "It's Getting a Bit Chile" was written to cover the War of the Pacific 1879-1884, between Chile and an Alliance of Peru & Bolivia. The War is also known as "The 10 Cent War" or "The Saltpetre War" as it was fought over taxation and mining rights in the Atacama Desert.  Although not well known in Europe the War had long term effects in South America and its peace treaties were only finally implemented at the end of the 20th century.

The armies of both sides had learned a lot from the Franco Prussian War and were equipped with fairly modern weapons and European style equipment and uniforms. Their attempts to mirror European tactics were met with varying degrees of success as they came to terms with fighting with breech loading rifles and machine guns. The armies were small by the standards of European Wars or the American Civil War, making it a War that is reasonably easy to assemble forces for and refight on a tabletop.

The War is well served by excellent quality, readily available books in English (including an Osprey), and figure ranges in 10mm, 15mm and 28mm. The armies are colourful with an interesting array of uniforms. The Bolivians even had a cuirassier regiment! If you can't wait and want to read more of the background, the Wikipedia pages are very good.

The rules were written to be played on a squared grid, but also contain adaptations to play conventionally with measured distances. The mechanisms are original but simple to learn and make use of a Disorder mechanism rather than figure removal, so all of your figures stay on the table for longer. Because of the use of the grid the rules are suitable for figures in all scales and basing. Infantry regiments, for example, are made up of 4 bases. It is unimportant how many figures are on each base, - you could even represent units with 4 figures and play on a large chess board if you are short of space.

The rules include a short history of the war, a uniform guide, sample orbats, Regimental flags you can scan and use and unique characteristics for many of the well known commanders of the War. There's also a Bibliography and a list of manufacturers with suitable figures from 6mm to 28mm.

A bit obscure, perhaps? Well, it's the perfect opportunity to stand out in a crowd and do something truly different.

To Ur is Human 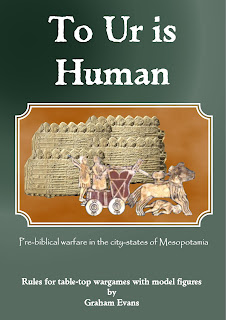 "To Ur is Human" was written specifically for warfare in the period of the Sumerian City states. Armies consist of spear armed infantry (some armed with shields), light infantry with a variety of missile weapons, medium infantry often with massed archery, and the distinctly interesting equid pulled battle car(t)s. The rules are deliberately priced at less than the cost of a monthly wargaming magazine to tempt people in to have a go at something new.

Given the state of knowledge about a period covering over 1,000 years the rules use generic infantry types that can be applied to any one of the city states, whether Sumer, Ur or Akkad, and the surrounding nations and peoples with whom they fought. Armies in "To Ur is Human" are often slow moving and ponderous on the tabletop, with one or two exceptions, and try to inspire dread in their opponents so that they are in a state of fear before combat occurs.

The rule system uses a square gridded playing area to speed up movement and the calculation of missile ranges. The combat system is simple, using a variable number of d6, depending on unit type, and a variable hit number, depending upon the opponent, together with basic modifiers to the number of dice rolled.

The core of the system is "The Fear Test". This compares two units, generally, and works out which one is the more scared of the other. Unit Fear State moves between "Fight", "Fright" & "Flight" throughout the game, as on rushing battle cars hurtle towards shield bearing phalanxes gambling that they will take Fright and become easy pickings. Clouds of light infantry circle round each other like flies, - as the Sumerians called them - waiting for the moment to pounce. Massed archers release clouds of arrows, hoping to deter their opponents from closing. Even with slow moving units there is a wide range of tactical decision making embedded in the system, and careful planning and execution is often rewarded, right up to the point when your elite battle cars decide not to charge...

The rules are suitable for any scale of figures, as long as you can get four bases worth into a square.

What have people said about "To Ur is Human"?


"an excellent example of a good book of wargame rules, and felt that I could have run a game straight after reading the rules. There were no gratuitous illustrations. Those that were included served a definite purpose, and helped to explain the rules."

" the rules themselves are simple, straightforward and quick to learn. They give a good, reasonably quick game...with two more solo games under my belt, I'm confirmed in my belief that this gives a very playable game"

There's a thorough review here: link, which also has thoughts about other periods the rules could be used for.

"Taiping Era": Rules for conflict in mid 19th century China, covering both the Taiping Rebellion and the Anglo-French invasion of 1860. The booklet will include a brief historical background and recommended further reading (the Taiping Rebellion is too vast to be covered in a set of wargames rules in anything other than a cursory fashion). Using offset squares or hexes, the rules are driven by a single core mechanism that is based upon a unit's "Moral Vigour". They may be one of the few rule sets out there that make use of the Mah Jong set you bought and don't know what to do with.

"Va T'en Guerre" & "Va T'en Ecosse": Two sets of rules using similar core mechanisms, which will probably be published under the same cover. The former are for the Wars of Spanish Succession, and the latter for the Jacobite Risings of the 18th Century. These rules do not use squares or hexes, but are played conventionally, using measured distances. Both sets of rules are written specifically to capture the tactics of the time. Battalions that hold their fire will gain benefits over those that blaze away at a distance; cavalry that can retire and reform behind solid lines of infantry will be able to recover and charge again. For the Jacobite rules a form of the "To Ur is Human" Fear Test determines if the Redcoats are intimidated by the on-rushing Highlanders.

After these rules are published I will revisit my rules for the Spanish Civil War and the Russian Civil War, if I don't get distracted by other projects. There's a set of English Civil War Rules to be written sometime, and I really need to have another look a the Wars of the Roses. And I have a number of shorter games that are more board game than wargame to deal with too.