Young Master Trebian is back from the frozen wastes of the North and was able to spare his aged parents a few hours yesterday. So as his sister is at home at moment we were all able to get together as a family (once I'd extracted myself from the office).

It is always good have all the family together for an evening, even if nothing is particularly planned. He seems to be having a good term, and revealed that his local has a regular games night. Amongst the stock of games is the original "Munchkins" which he and his friends have taken to. Of course basic Munchkins is never enough., so I got the "Dad, - can I borrow one of your sets of Munchkins...." with the implication that I can't possibly play them all at once.

Of course it is actually possible to play all the Munchkin sets together at once, but in practice we never do it. I tried to palm him off with the slightly naff "Munchkin Bites" (the undead version), but he held out for "Space Munchkins", which I must admit is a good choice.

If you've never played Munchkins it is a real hoot, especially if you ever played D&D or any pen-and-paper RPG. My favourite is "Munchkin-Fu", the version based on Hong Kong martial arts movies. In fact we rounded off our TnT day with a couple of games of the 'Fu last Saturday.

Any how, having sorted that out the next question was what to do for the rest of the evening. I had borrowed a DVD of "District 9" off someone from work, and it was fairly heavily hinted ("Oh, Dad, I haven't seen that yet. It would be really good to watch it before I went back") that we should all watch it as no one had seen it yet. 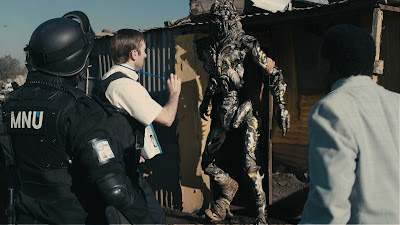 I realise "District 9" is last year's news, but I have to say it was a gripping, well put together movie, with really well realised aliens and superb sfx. It is an original take on the "first contact" story, with a fair amount of gratuitous shooting.

What better way is there for a family to bond than watch alien and human gore splattered all over the screen?

It probably isn't giving anything away to say that the film, - which is set in post apartheid South Africa - has a fair amount of shooting and action sequences. In particular there was a three cornered fight between some Blackwater-style private security forces, the aliens and local Nigerian crime warlord forces.

Now, is that a President Jog-Jog scenario waiting to happen, and if so, where can I get some 15mm prawn-style alien figures?
Posted by Trebian at 19:36