On Saturday I had the great privilege of attending the Memorial Gathering for Paddy Griffith at the Royal Military Academy, Sandhurst. Due to "Real Life" I missed the funeral earlier in the year, so I was grateful for the opportunity to meet together with other friends and colleagues to celebrate the life of one of the most interesting people I've ever met.

The Northamptonshire contingent (me, President Steele and the Dormouse) assembled at Trebian Towers and made our way down together meeting up with a group of WD stalwarts in Yates Wine Lodge in Camberley for a pleasant lunch, some reminiscence and some, limited, silly hat wearing. Then it was up to Sandhurst for the Gathering. 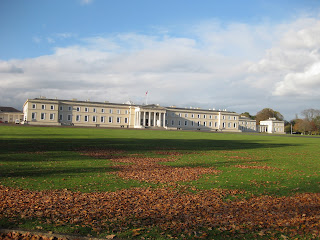 I suppose there must have been a 100 of us there. I'm never very good at estimating this sort of thing. People were there from all the phases of Paddy's life from school, through university to his final home in Manchester. He knew so many wonderful people it is only now that I sit down to write that I realise that many were missing as well. He made connections with people where ever he went. Inspiring and infuriating he was, but certainly never insipid or insignificant.

The Memorial was held in the Indian Army Room at Sandhurst. The Head of War Studies, Dr Duncan Anderson assured us this was the best the RMA could offer (and "possibly the only large space at Sandhurst where Paddy didn't run a wargame"). It looked pretty damn good, so I have no reason to doubt him. The stained glass windows covering the great achievements of the Indian Army are both beautiful and inspiring. It made me smile, - the only game Paddy ever put on where I played and it turned out I knew more about the subject than him was an eve-of-Mutiny India game. I suspect that state of affairs didn't last long after he found that out.

The first"memorialist" was Genevieve, Paddy's charming wife. She recounted how wargaming and military history seemed to be the mainspring of their family life, with every family holiday in someway ending up with a battlefield walk. Anyone who ever stayed at Paddy's house for one of his games knows that they were devoted to each other. She is a very special lady and she had to put up with a lot at the various residences in Camberley, Nuneaton and Manchester, for example being woken at 3am as wargamers ran up and downstairs simulating some military event or other (and on one occasion me spilling a large glass of red wine all over a white banqueting cloth).

Two of Paddy's childhood friends spoke about being at school with him and the games they played, with Paddy always going that one step further than anyone else. , - whether in his work at school or in the fictional worlds they created to set their games.

It came as a pleasant surprise to me that one of the speakers was my American History lecturer from Sheffield, Dr Richard Carwardine. He shared rooms with Paddy at Oxford as undergraduates. (He was also kind enough to at least pretend he remembered me when we spoke outside). The other surprise in his remarks was not that Paddy was a precocious, if unruly, talent but that he was a very physical person, not just in taking part in rowing but in climbing over gates and running round quads and so on. I also did not realise that Richard (he said "Call me Richard" not easy after three years and subsequent memories having him labelled as Dr Carwardine clearly in my mind) was one of the instigators of Paddy's revisionist ACW book, but he was and is credited as such in the preface.

Other speakers told us of Paddy's career at Sandhurst, of the games he ran, the impromptu dinners (he was a very good chef, although several attendees recalled his "Ration Book Christmas Dinner" with considerable horror), and also of his later writing career. John Curry drew our attention to the pivotal importance of his co-authored book "Not Over By Christmas". John claimed that this book, together with secret games run by Paddy at Sandhurst had a key role in changing NATO strategy and ending the Cold War. It is too easy for those of us who knew him only as a recreational wargamer that when he did it "for real" it had an important affect. Similarly there is a generation of RMA graduates out there, directing HM's Armed Forces who all studied under Paddy.

Lastly Mark Hone spoke about Paddy's later years in Manchester, the groups he created and the people he inspired, to be followed by Andy Callan. Andy spoke about his friendship with Paddy and the founding of WD, of what he wanted to achieve and why (sub text here) he left. Most of the tributes focused on Paddy's modesty and talent and his ability to inspire. He did all of those things but he could also be very firm in his views and was a man it was possible to fall out with easily. Nearly everyone did, - but then a few months later were back as firm friends.

The event was also an opportunity to see again an episode of Channel 4's "Game of War" with Paddy & Arthur Harman in matching cardigans. It's all we have, but there were in that show some super snippets of the PG umpiring style. We all watched with much affection.

And just as we were all about to leave Phil stood up and presented an award to Genvieve from the Society of Ancients, given posthumously to Paddy for innovation in game design. Everyone clapped, and it brought a tear to the eye.

It was a pleasure afterwards to mingle with the other guests, including Peter Dennis, Martin Wallace and many other people Paddy had befriended during his sadly curtailed life.

So, thankyou Genevieve & Robert for giving us a chance to remember Paddy, and once again sharing him with us.
Posted by Trebian at 08:25