So, post Christmas catch up. I note from my hit counter that the last battle report was a massive turn off, so back to the normal odds and ends.

No up-date on Christmas presents. If they become relevant to wargaming they'll appear at the appropriate points.

Plus blogs with lists of "this is what I got" are a bit dull. Christmas for me is more about eating well, drinking well and gathering together with the rest of the Trebian clan. And playing games, particularly on Christmas Eve. This year we fitted in a particularly full session, including Fluxx (the Monty Python version), Apples to Apples, Family Business, Ratrace and the perennial non-thinking favourite, Newmarket (although we seem to play a variant with rules not available on the internet. As I've played it every Christmas since I was about 5 I'm sticking with our version). 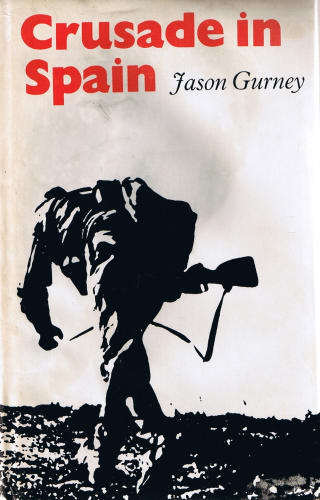 Any how, what of the wargaming news? In the slack time over the past few days I managed to finish Jason Gurney's "Crusade in Spain".

Regular readers may recall that this was one of the second hand books on the Spanish Civil War I picked up in Hay on War back in September. When I bought it I didn't know anything about it, - it just looked interesting and was in the price range I wanted to pay.

It's only a slim volume, - less than 200 pages - but it has a wealth of detail and period colour. Gurney has a short Wikipedia entry and this will lead you to a fuller biography on the Spartacus Educational website (take care here, - the site has its own political agenda!). Essentially Gurney was a naive political radical of a generic sort and went to Spain to fight in the International Brigade because he thought it was right to fight Facism.

The book started slowly being mainly a description of how much fun it was to be an arty type Chelsea in the 1930s (he was a sculptor) and how many women he slept with. The main action however is set round the Battle of Jarama and there is a good description of the action he saw. There's not just a good description of organisation, equipment and tactics (Gurney was a battalion scout so got to see a lot of what was happening) but also excellent pen portraits of the various leaders he came across. If you have an interest in the period I recommend this to you. A lot of memoirs aren't always helpful to wargamers but this one is ripe for what Paddy G called "tactical snippeting" where details of how wars are actually fought by looking for small pieces of evidence in personal writings.

Apart for finishing this off I also completed the fourth and last of my IB battalions. All I have to do now is the flags for this one and two others and they're ready for action. The next painting project is to do the Brigade HQ base and atk support (the English speaking IB had a 37mm atk gun or two). At the same time I'll do my first pair of XIVth Army 25pdrs. Not really sure why I bought six of them now.

All of which means that after painting them I have to sit down with the other packets of Peter Pig SCW figures I was given back in September and assemble the chip-bag hat wearing fraternity into units of Spanish Foreign Legionnaires. I know that they're from a Falangist boxed set but the uniforms are the same and the Falangists never really got near the front line.

And I've picked up another book to read, - a remaindered copy of Edward Vallance's Radical History of Britain. I've been looking forward to this for quite a while, so I hope it doesn't disappoint.
Posted by Trebian at 18:51