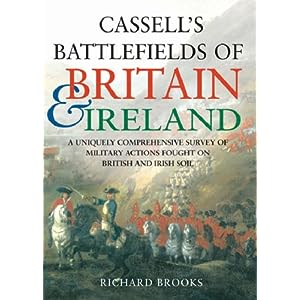 I was just perusing my bookshelves and realised how easy it is to acquire lots of generalist history, - especially "Battles in Britain" type books.

If I was to be allowed to keep only one (Desert Island Disc style), or if I had my time over again and only bought one, it would be this one, without a doubt.

Richard Brook's book is the best of its kind. All the information you require (or is available) no ridiculous speculation and good clear maps where ever it is possible to supply one.

The accounts vary in length, depending on the battle, and it isn't a small book. It has good numbers for the battles, and nice clear who was in charge/who died tables. It claims to be comprehensive and I have to say I've never found a battle missing when I've gone looking for it.

I obviously have monographs on various battles in Britain (Foard on Naseby, for example), and other more detailed works (Wanklyn on the Civil War, for example), but if I want a summary of any battle in Britain, this is where I go first.

The various period sections are divided up by short essays drawing the reader's attention to salient points and developments. These are very readable in their own right.

I think it benefits enormously for being written by a wargamer. If you don't have a copy, seek it out. You can get a second hand copy for £10 on Amazon if you don't want to stretch to a new one.
Posted by Trebian at 20:47