So, up bright and early to see what the day will bring, which, initially is a very fine cooked breakfast. Friday night went on a bit late, but I got to play a Martin Wallace Treefrog game that's just ending development, which is always good. It's based on a BBC TV character and will be in the shops before Christmas.

Anyway, first session is John Bassett's "The True Glory", a discussion/political game based on the Armada and the associated Catholic scares. I played Sir Francis Walsingham, head of the secret service. I was bit slow at the beginning, but once I got the hang of the fact that I just had to make stuff up, my cause started to thrive. 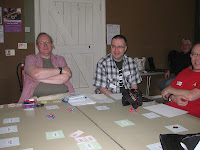 Her Majesty, Queen Elizabeth (in the pink top) surveys her council as they debate what action to take. Sir Walter Raleigh looks on, eagerly.

The cards on the table represent locations in the game, and ships or people. 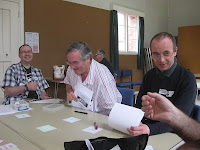 The leaders of our fine fleet. Admiral Howard in the middle with Raleigh and Drake. All they ever wanted was more money for the Navy. We wouldn't have minded if they'd actually sunk some Spaniards. 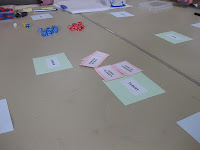 Oh, look! Leicester and Her Majesty are revealed to be at Tilbury, with the trained bands. Soon Leicester will be off to the North, ineffectually seeking out Catholic traitors. 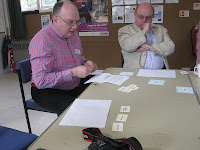 Leicester looks pensive as Girolami whatever the Italian genius prepares his awesome fireships. Sank more stuff than anyone else. Dr Dee, mysteriously, is not in the picture.....could this be magic? 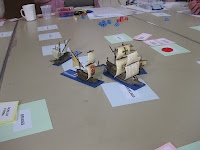 At last, some serious ship on ship action. By this time I had exterminated the Catholic 5th column on land with the help of my spy, Kit Marlowe, some good die rolling and some outrageous lies. Who can argue with a combination like that?

After a well deserve coffee/tea break with home made biscuits, it was time for an alternative take on the Armada, with Jim Wallman's "Felissima Armada".

Jim designs loads of games and has no fear of size or scale.I understand he has a lock up storage unit stuffed full of wargames stuff. For this one he got out his model ships. 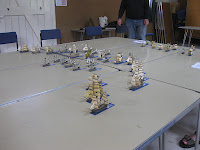 So here's the Spanish Armada. Some Airfix, some Revell, some scratch built. Against this mighty fleet we had four ships, but we were English, so no worries there then. 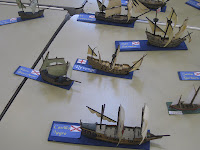 Tom sailed fearlessly into the middle of the fleet in Revenge (aka he got the move distances wrong), and laid about himself fearlessly. Did I say he was fearless? 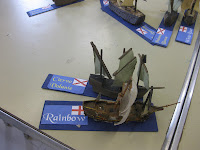 I, meanwhile, cut out a small straggler and boarded her. This was to be the first of many such prizes...except.... a stunning series of  "1s"over five turns left me with no crew, drifting in the water.

Still, it looked great and was a lot of fun. Simple rules played by simple folk.


Finally, for this post, a picture of a game I didn't play, - Wayne Thomas' game of Chinese Warlords. Shame to waste it, so here it is, although I know nothing about how the game went. 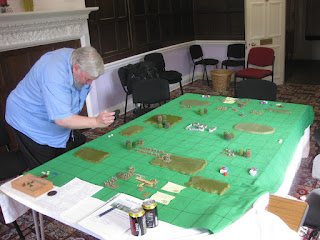