Not enough time for a blow-by-blow account this week, but I did take some pictures and here they are. In any event the game was a playtest for CoW, and there was a bit more discussion than playing so no final conclusion was reached. 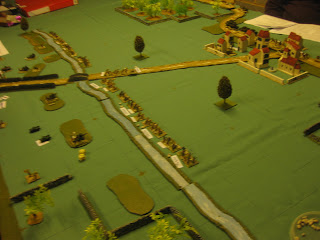 The Nationalists are on the left, with the Legion surging across the stream. They all have markers on them indicating that they are moving. On the other side of the bridge the Condor Legion waits in reserve. The Republican forces are massing behind the ridge line and village on the right, carefully preparing their counter stroke. in fact they did a very passable impression of Republican staff work, - "I want the Anarchists on the right, no the left, no the right, with those tanks,. yes the tanks that can only be deployed with the Communists so i'd better move them back. when did you want this attack to start?" 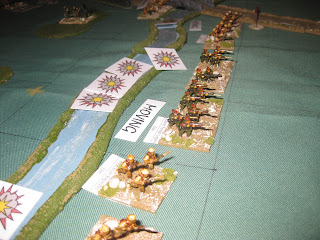 A close up of the Legion forces, stating to take some stick from the Republicans in the village. 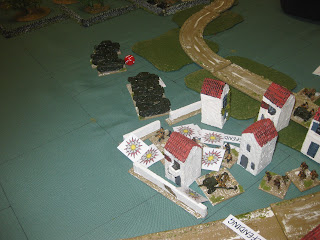 A ha! The Republican armoured fist is revealed, driving across the ridge line, trying to take the pressure off the Asaltos in the village who were starting to take some hammer. 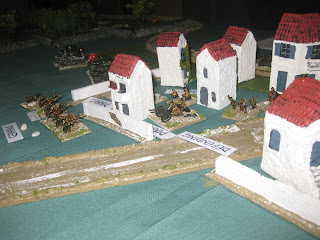 The Legion closed on the village and tried to take it bayonet point.They failed, being surprised at how tough the Asaltos were and how poor their die rolling was as well. 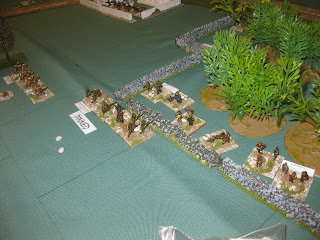 Another flank, another bayonet charge. This one failed as well. 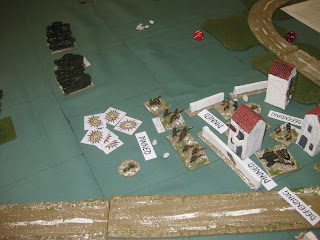 The armour push on as the Legion stumble backwards with a few casulaties. Not going well for the Nationalists.

All in all a very useful playtest. There are still a few wrinkles to work out, but I think I have something that will play alright and looks right as well.

Next stop CoW, Sunday morning.
Posted by Trebian at 07:26