Due to a last minute domestic commitment Will was unable to bring along his latest ACW refight, so I had to find a stop gap.

Long ago I threatened to refight all the Battles of the English Civil War, and I've done a few, including Edgehill, Lansdown and Cheriton (I think) plus a Bishop's War battle as well, so I returned to the project.

The Bible for this project is Richard Brook's book on the Battles of Britain & Ireland. Flicking through it to find a suitable battle (has to be big enough to use most of a 5' x 3' playing area with c5,000 or more troops aside) I alighted upon Adwalton Moor. This is the battle that secured the North for the King until Marston Moor over turned it. About 15,000 men took part, 10,000 Royalists under the Marquis of Newcastle and 5,000 Parliamentarians under the Fairfaxes (Pere et fils).

The evidence for the battle is a bit weak and not entirely clear. Brooks does a decent job, and has a map, but it is still hard to follow and turn into a viable game. Especially if the Parliamentarians aren't going to be just blown away.

The background is an abortive attack on the Royalist camp to stop them marching on Bradford. They leave it too late and end up fighting an encounter battle on Adwalton Moor. The Royalists have to fight a defensive battle with their advance guard to enable their superior forces to deploy and counter attack.

The figures are Peter Pig, the rules "Victory Without Squares" which are available as a download, top right of the blog. A smaller turnout compared to last week, with Chris K taking Parliament and me running the Royalists until Phil arrived. Neither player knew the battle being fought before we started. 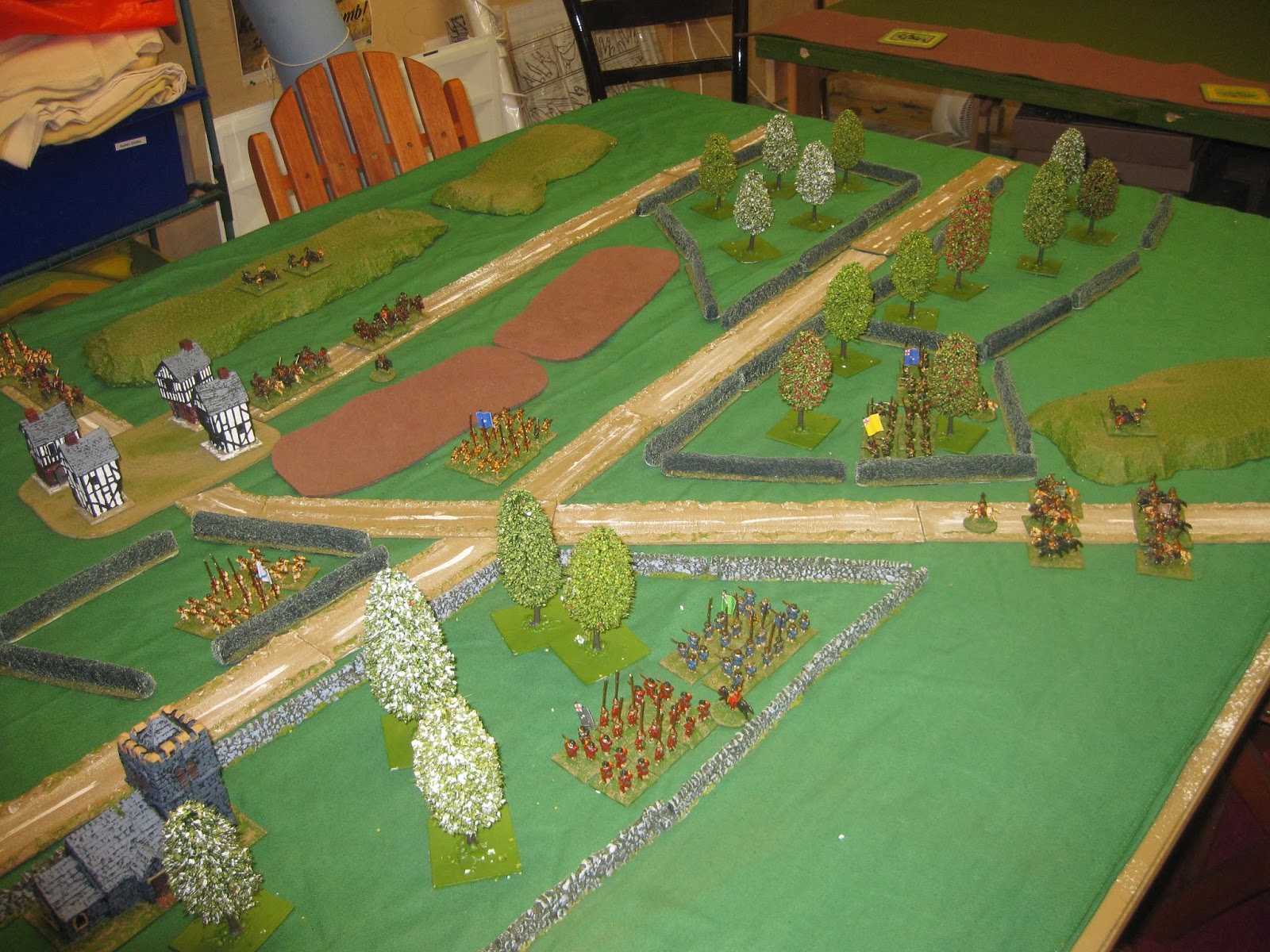 Above is the table as set out. The area in the middle with the brown templates is Adwalton Moor. They represent rough ground made up of coal workings and coarse vegetation. I removed them before the game to create a bit of a surprise for the players. 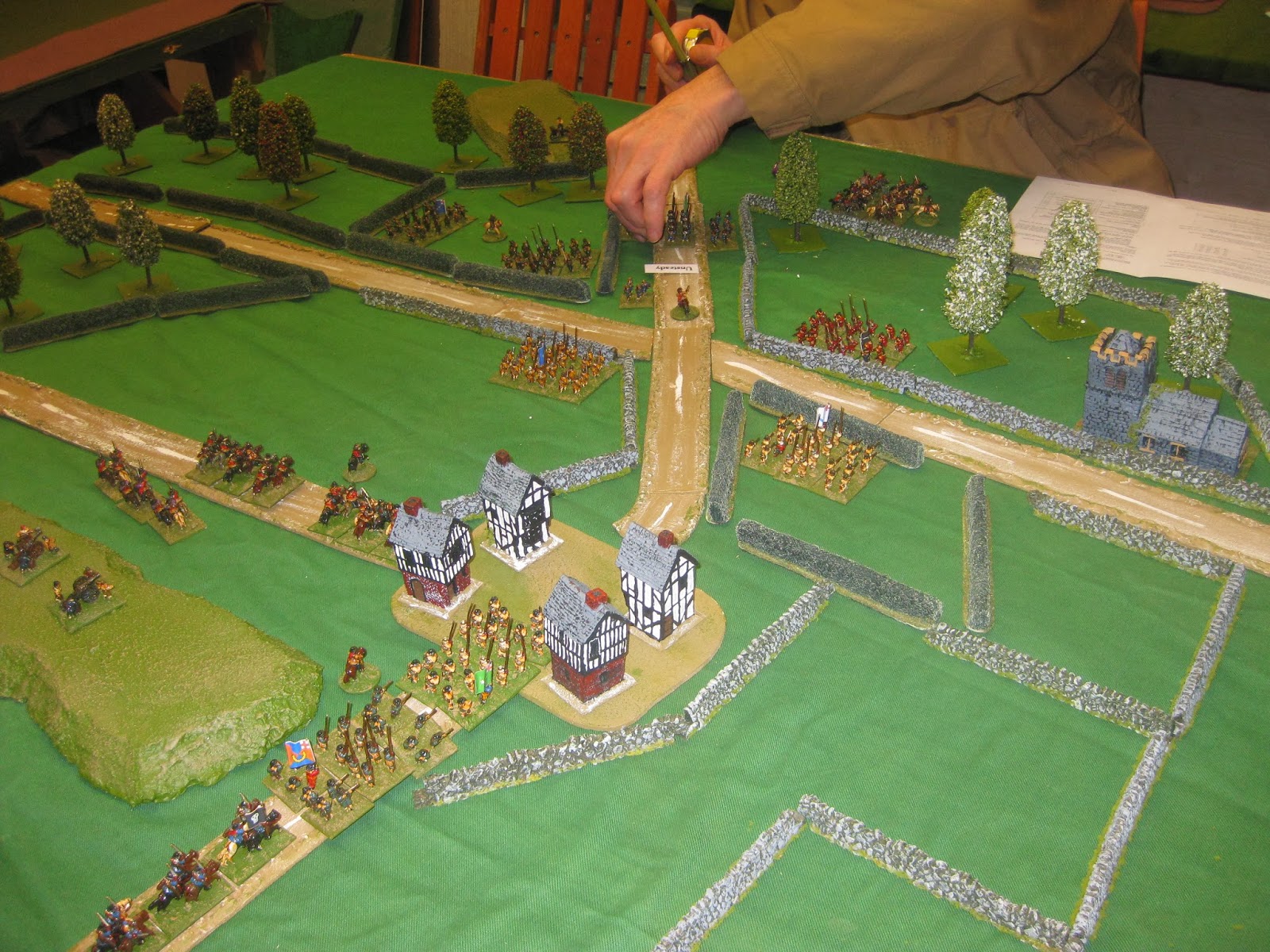 This is about move 2. The Royalists, near the camera, have started to push up the road and are moving more cavalry up on to the Moor. Chris has decided to send his cavalry off on a long flanking march to his left (you can see them under his arm at the back), and has moved his right hand flanking infantry unit towards the centre. Historically this unit occupied the enclosure on the left of the Moor as we look at it and gave the Royalist cavalry some issues.

We are starting to exchange fire across the lane with minimal effect initially. 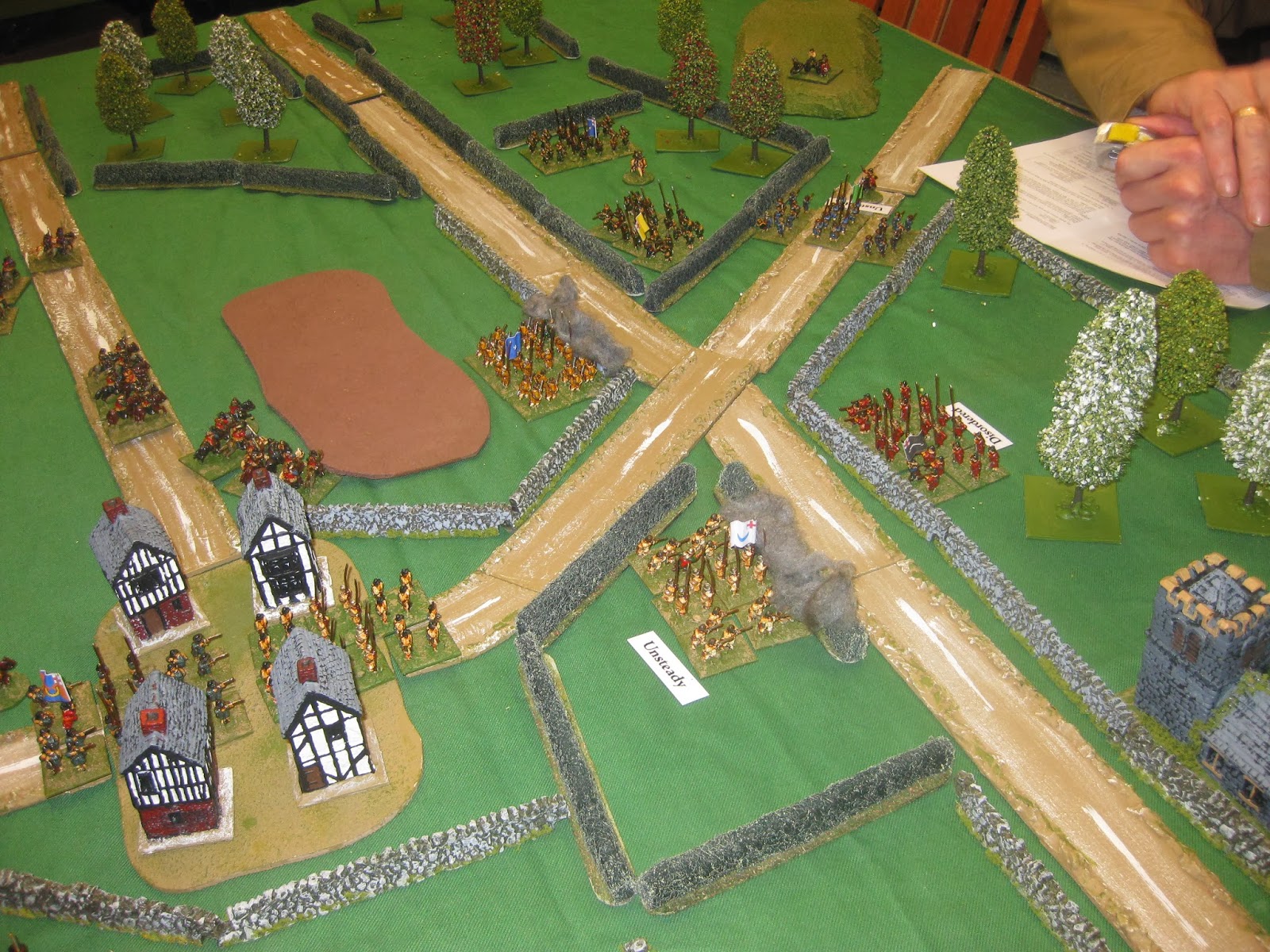 By now Phil has arrived, his attempt to move his cavalry across the Moor revealing the rough ground. He took this very well, all things considered. The fire fight near the camera has reduced both sides to "Unsteady" status, as you can see from the labels. 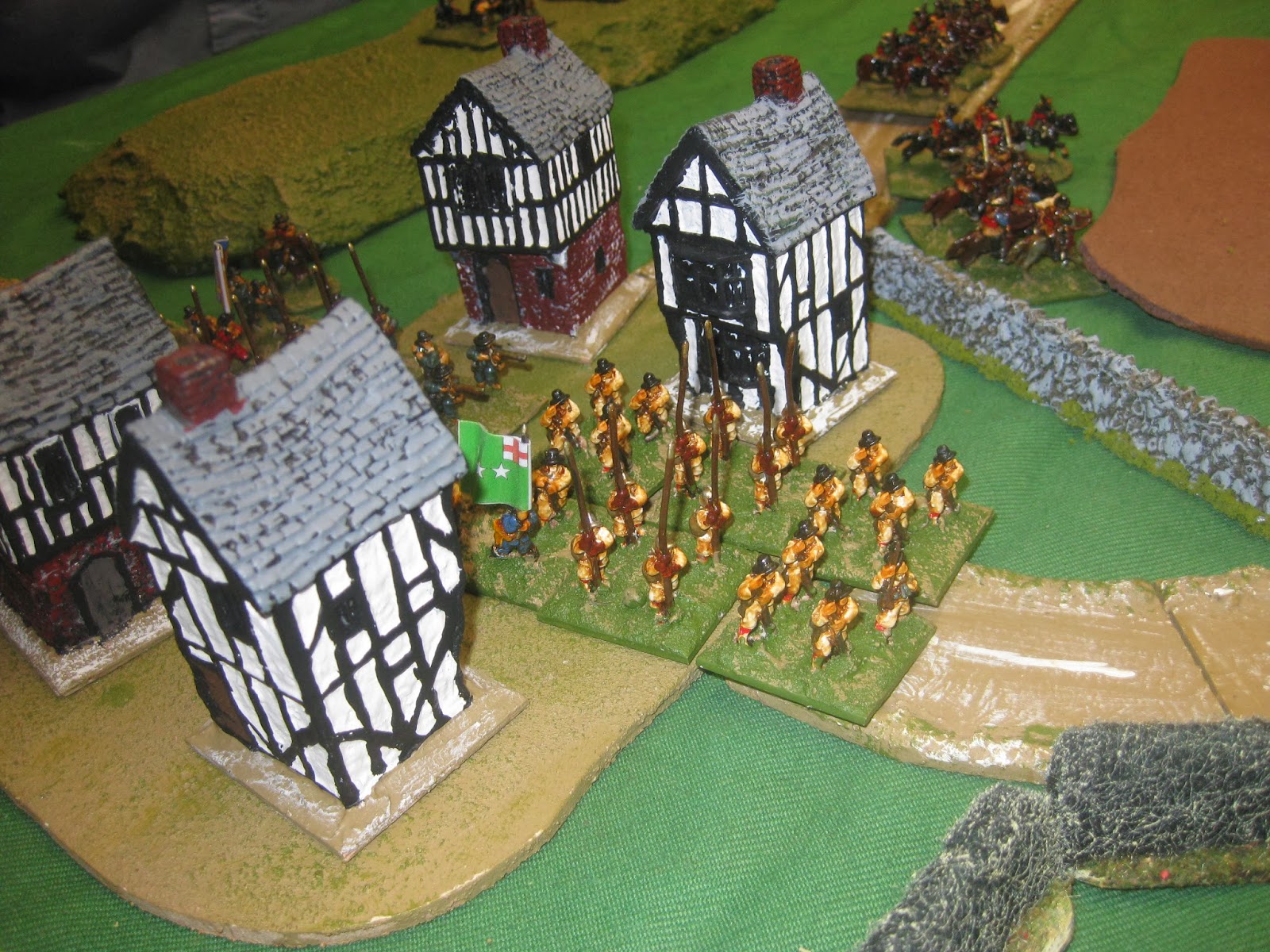 The Royalists are now arriving in force, marching through the village. There are no pictures of this, but Chris picked up some Unsteady markers from artillery fire and was unlucky trying to get rid of them. I think he had missed his main chance already, by not using his cavalry to force the middle of the table. The flank march never came to anything, and he had lost the one window of opportunity he had where he had parity in the mounted arm. 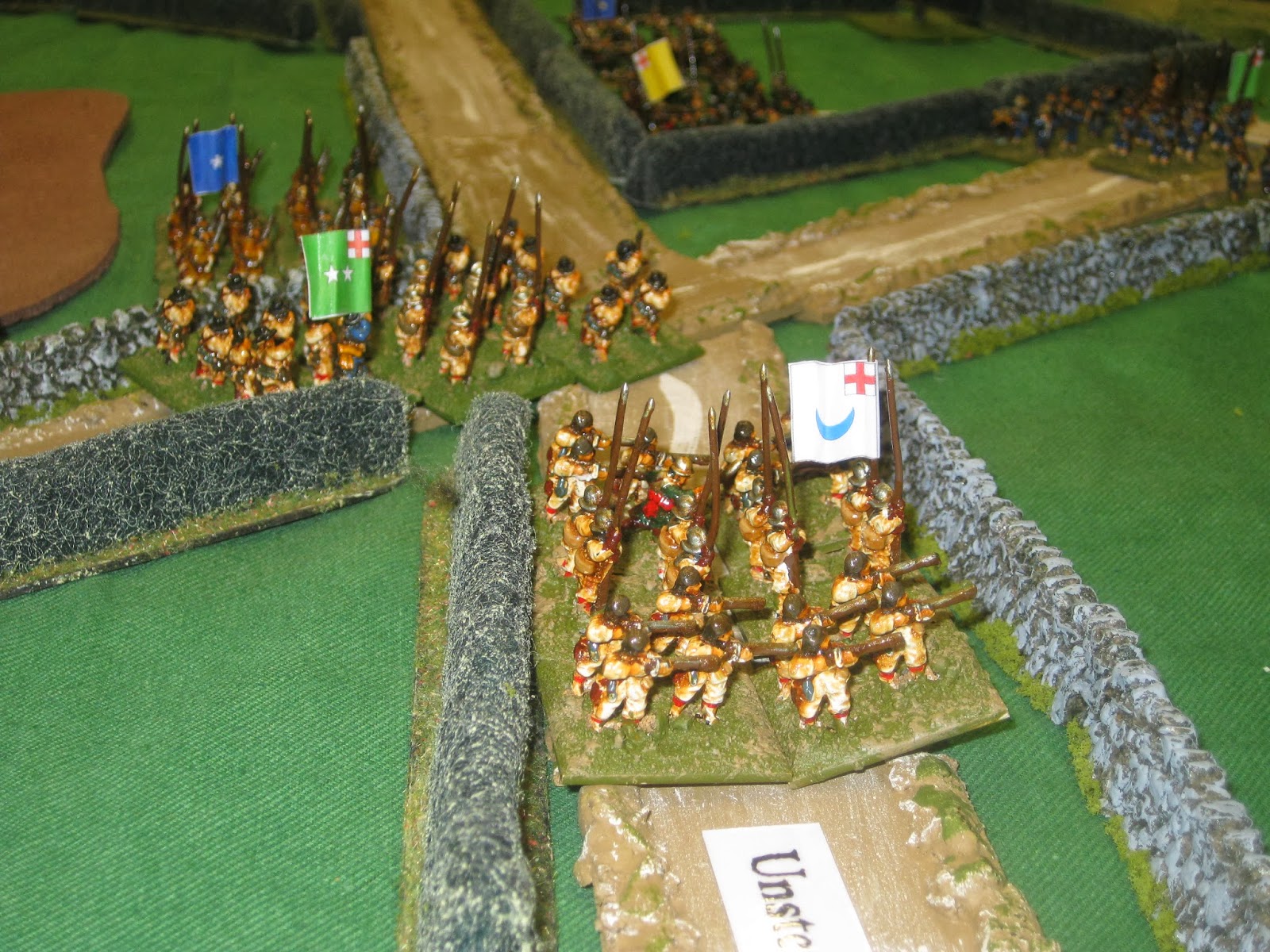 Phil started to attack aggressively in the middle (when does he ever not?) and threw back Chris from the wall. Chris' central infantry unit was a bit tentative in its advance, and picked up an Unsteady marker which he just couldn''t get rid of. 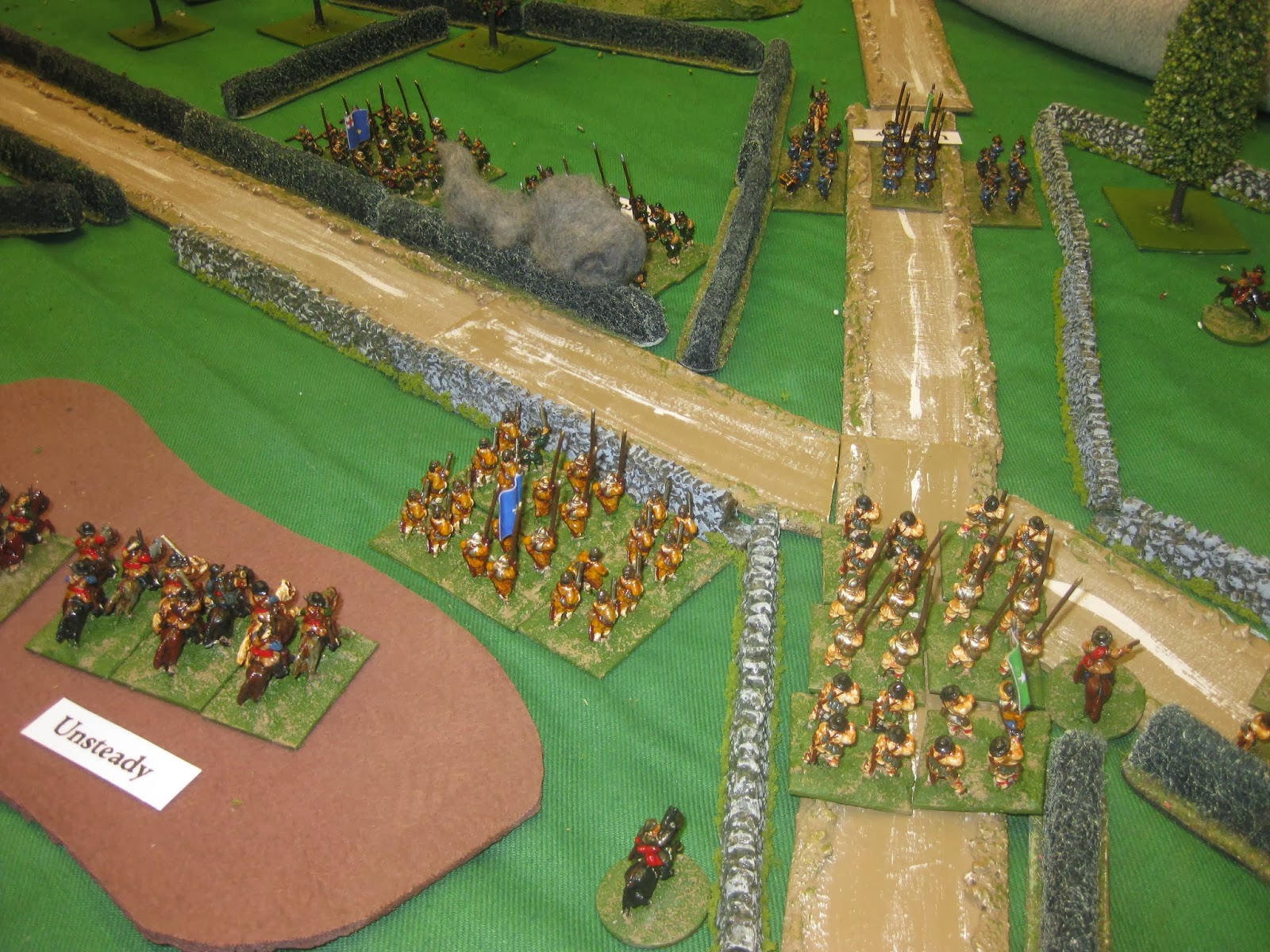 In fact he dropped back in the middle to reform out of range of Phil's advancing infantry. This gave Phil the chance to deploy in the lane and dominate the middle of the board. An attempt by Chris to flank the position by passing his cavalry up the cross table road was too late and encountered a number of problems, - such as infantry lining the walls to volley them.

The Unsteady marker behind the cavalry is because of their attempt to cross the rough ground. 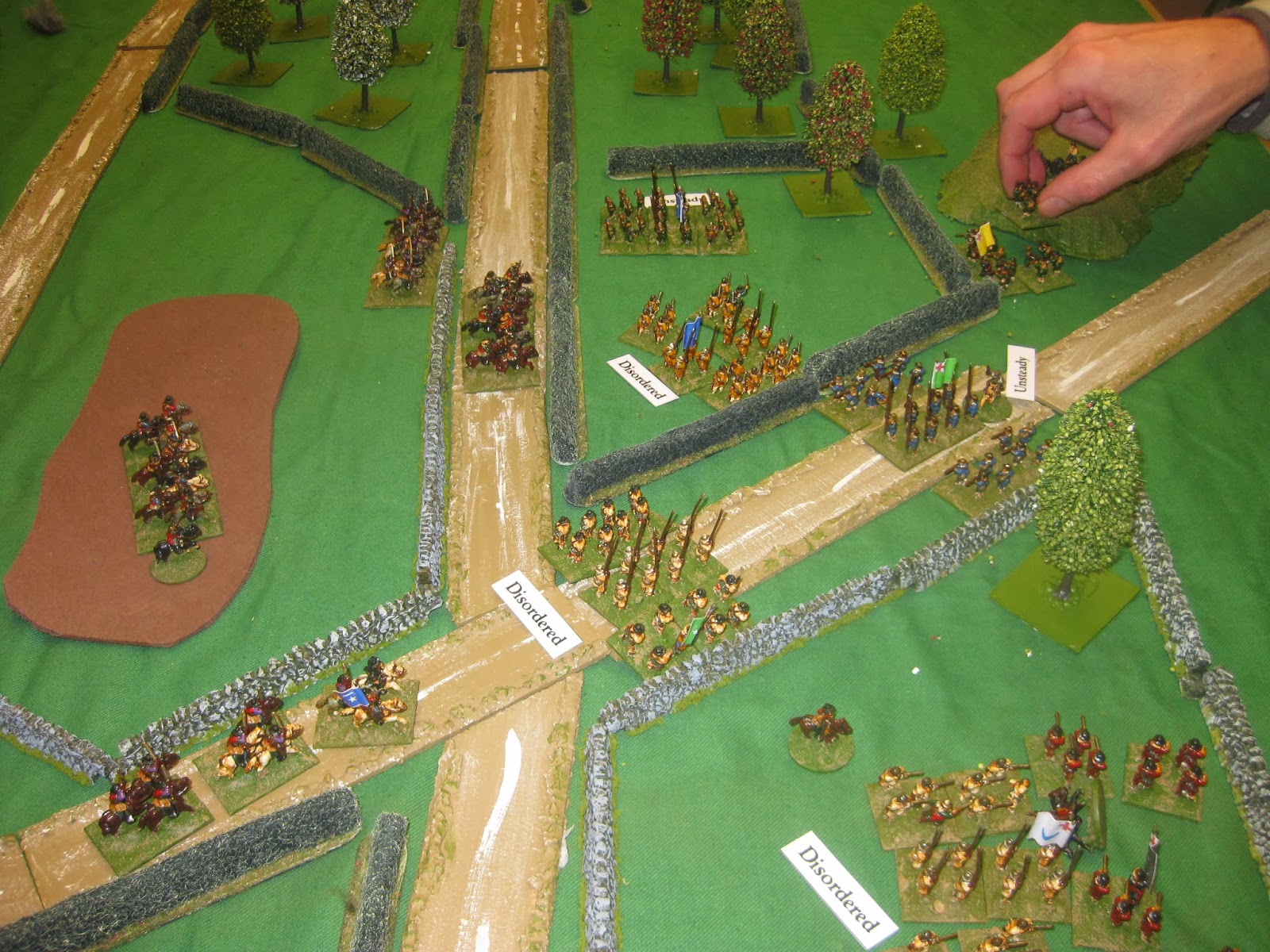 Phil has now launched two successful charges across the lane, and forced back the Parliamentarian infantry on the edge of the enclosures. His growing forces marching on table emboldened him as his losses could be absorbed. Chris was not so lucky. 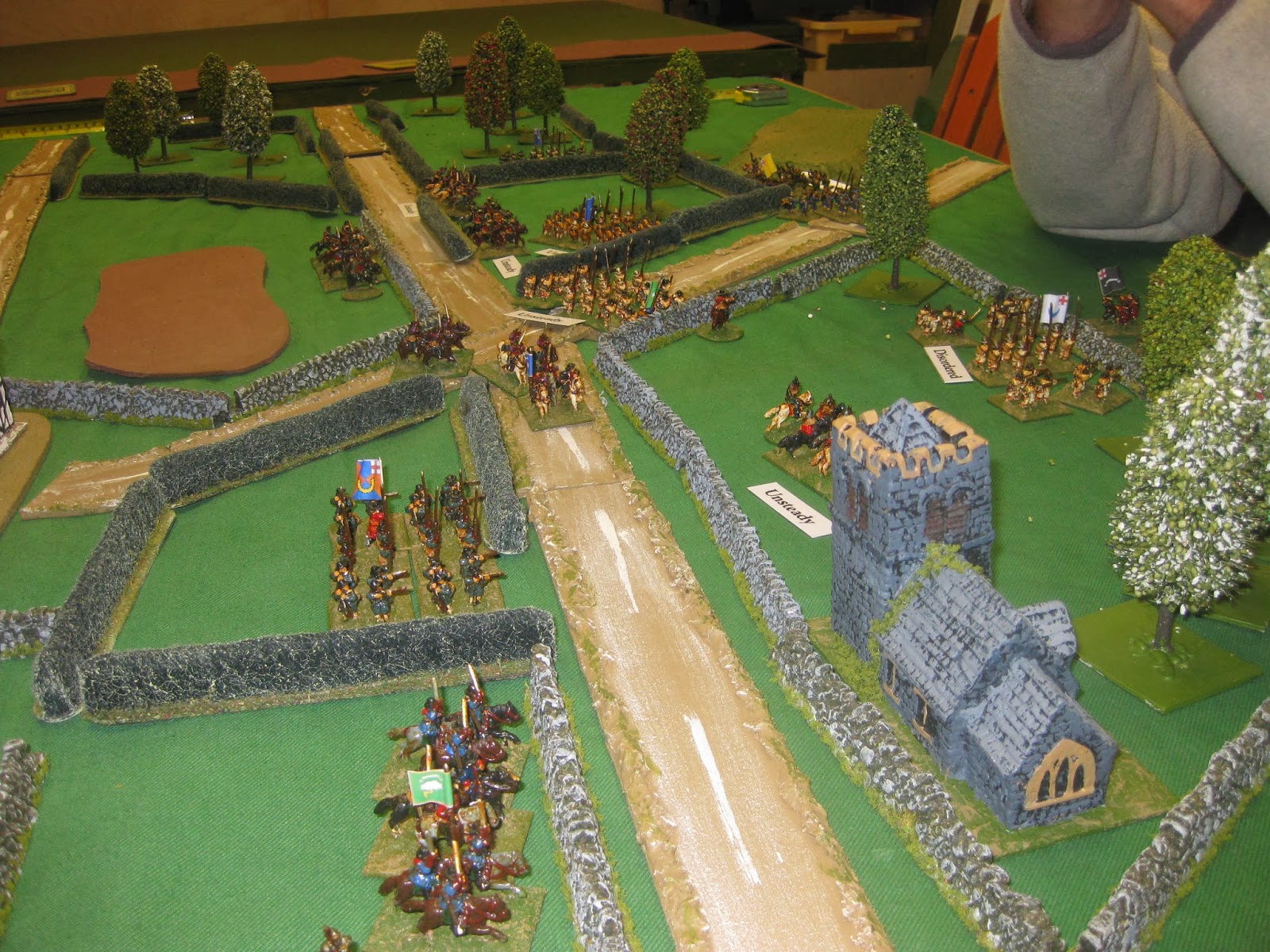 By this point Chris has tried his best, - he has counterattacked Phil's infantry with his right hand most unit, but that in turn has been hit by the Royalist cavalry. The Parliamentarian cavalry on this flank has retired behind the church having been roughed up a bit by musketry.

So he took the decision to retire from the field, at which point I called the game closed with a clear Royalist win, looking a bit like the historical outcome.

It is hard to see how the Fairfaxes are going to win this one. The historical decision is a high risk gamble, and they needed to get into the village to have any chance of fighting the Royalists off. Looking at the game the only chance you have is too throw everything at the Royalists from turn one at high speed in order to achieve some local superiority, but it's a very thin chance.

Thanks to Phil & Chris for helping me cross off another battle on the list.