Chris K has been a more regular visitor recently. This usually means one of two things. Either that his employer has come to its senses and is no longer making him drive all the way across the county to do his job (can't tell you who he works for, but its initials are NHS) or he's really desperate to put on an NQM game. If we're lucky it's both, and he gets to turn up early to put the game out before everyone turns up.

This week it was both, so we were off to the Eastern Front with NQM. Details for the scenario are over on Chris's blog: NQM - Winter Offensive 1942. The information there enabled me to spend Sunday morning setting the tables out (which involved re-laying the carpets now Shedquarters is dried out).

As a perennial Soviet Chris softened me up with talk of a "massive Russian push", and " a major counter attack". He even hinted that there might be lots of armour.

For the evening's entertainment we were joined by Phil (with some boxes of Soviet infantry and an SS division), Will and Richard. Will & I took the Soviets, Phil and Richard the Germans. This was a big game so Chris did arrive early to get the kit out, and also to press into service some of my RCW infantry to supplement the Russian Hordes. 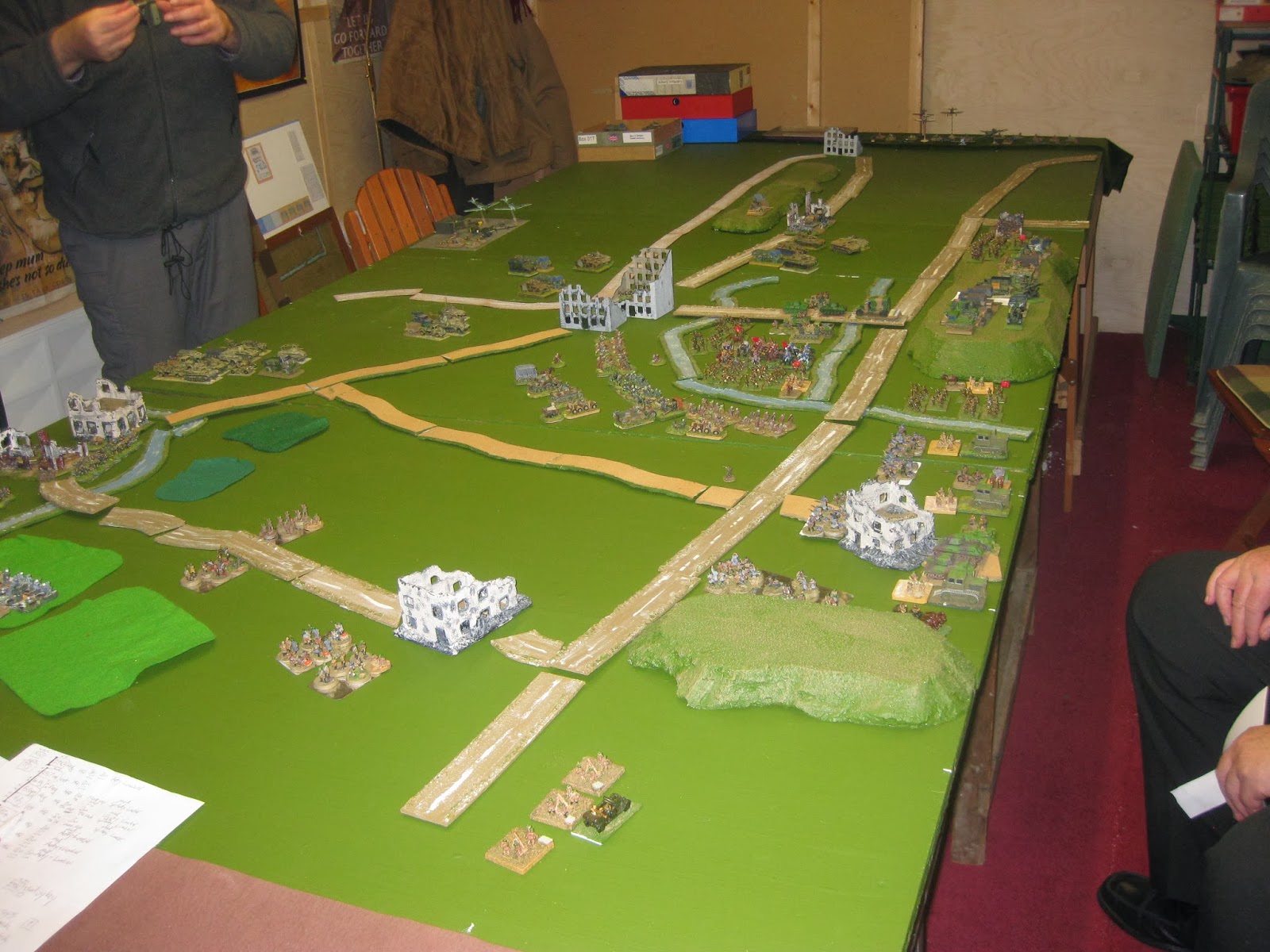 This is what the  table looked like. Kharkov is in the middle. North is the far end of the table. It is October and all the rivers are frozen. 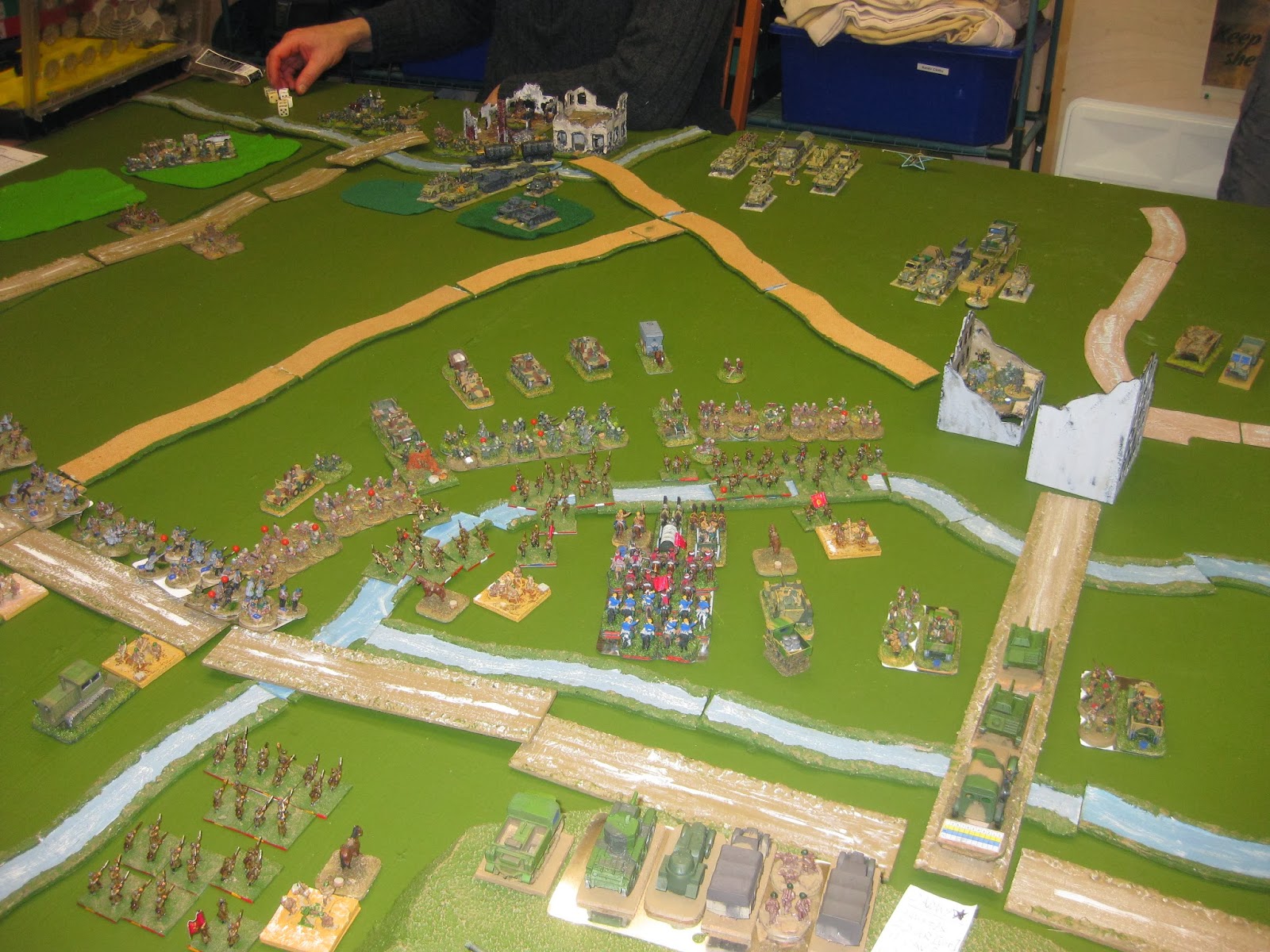 The Soviets under my command were this side of the river, preparing to take Kharkov. We were pinned in place by Hungarian Divisions, dug in along the river line. We opened the game with holding attacks all along the river, whilst Will was commanded to roll the line up from the flank nearest the camera. 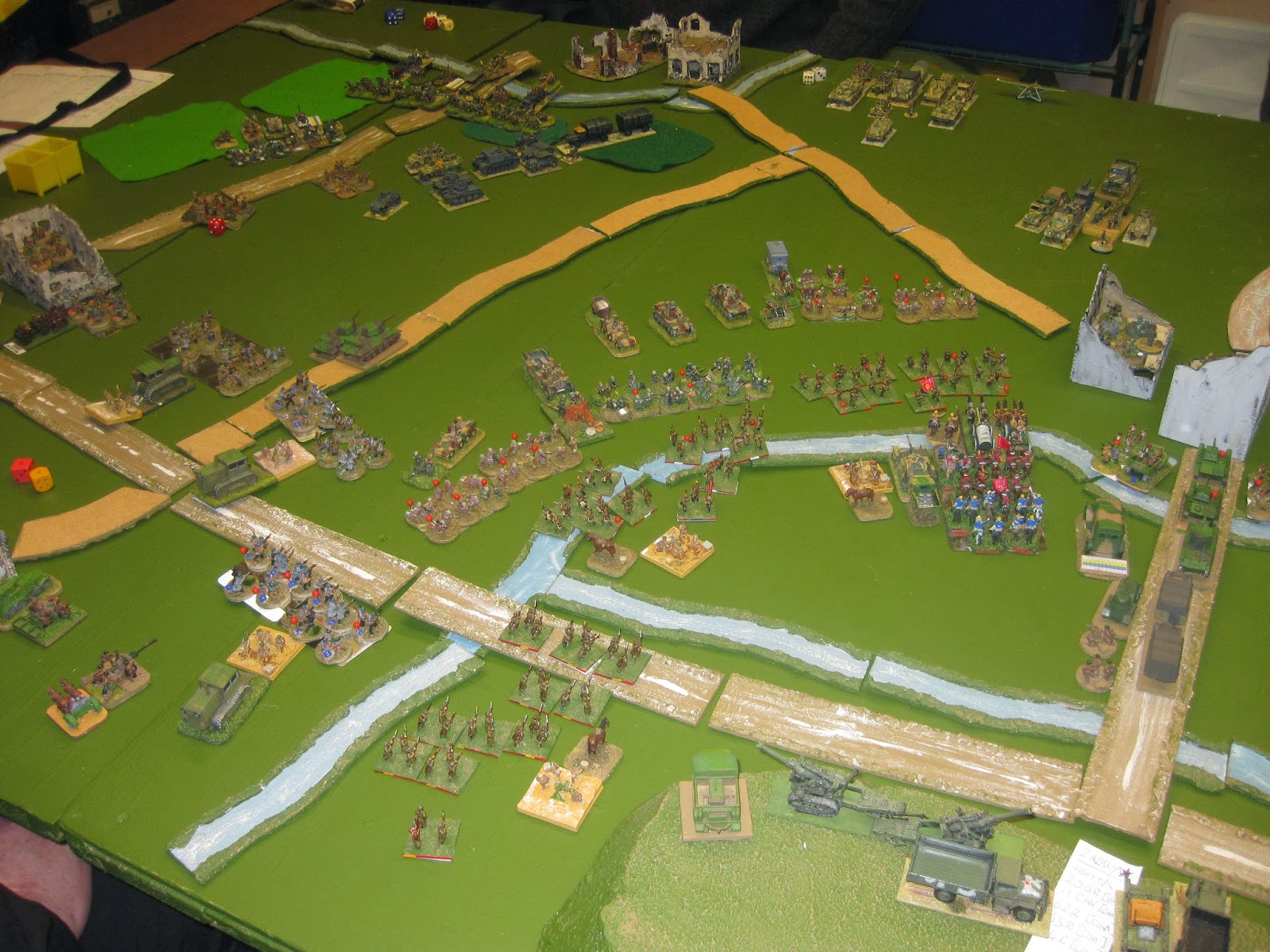 Typically, this being NQM, Will's attack was a complete bust, and he was bounced after barely getting to grips with his opponents. I had no option but to turn the holding attacks into real attacks, and moved up the
Cossack division in support. At the same time the Guards division started the assault on Kharkov. The way the dice were rolling meant I might as well just chance it all. 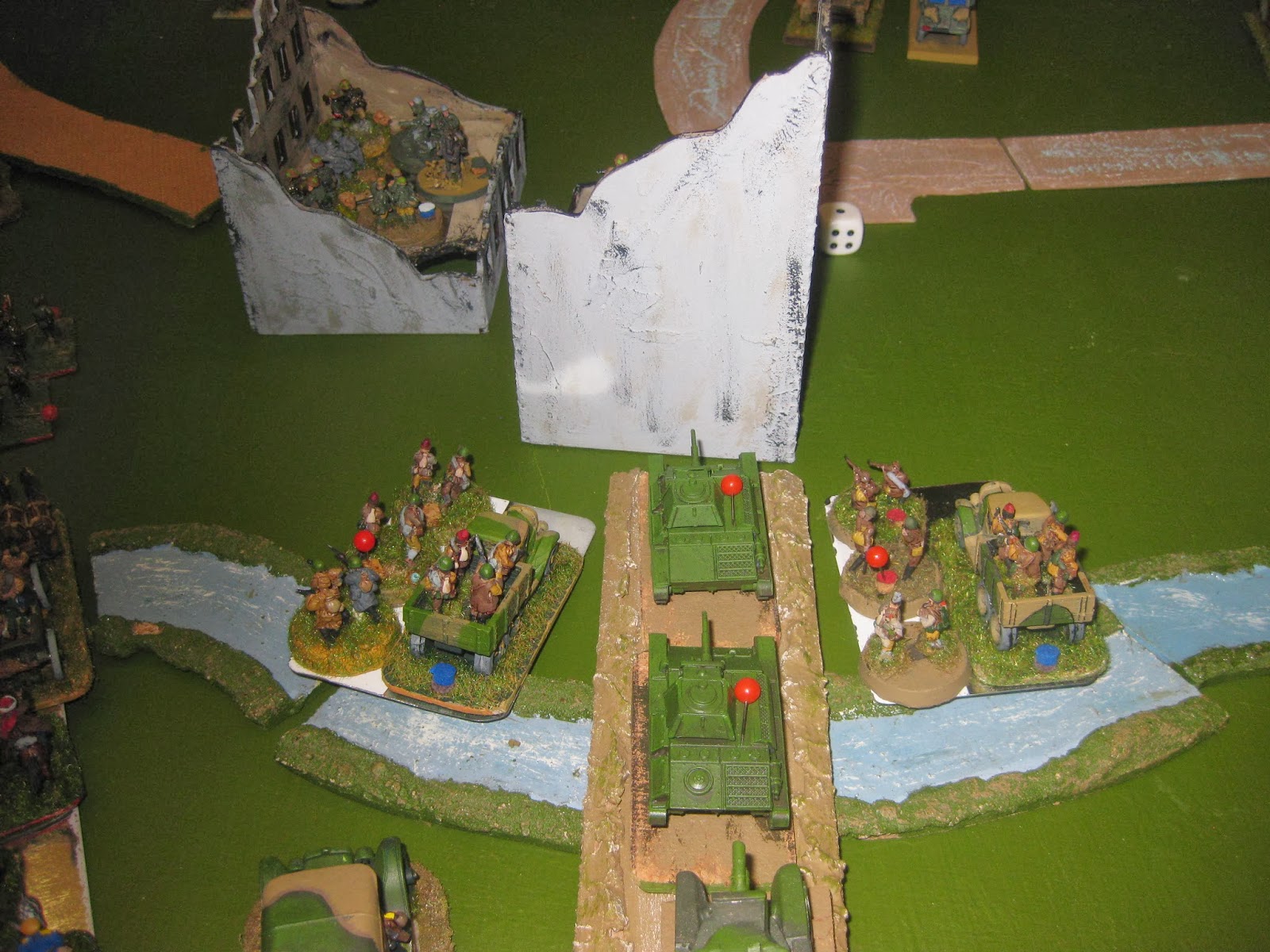 Here we go, rushing the suburbs, hoping to catch the Nazis off guard. Fat chance, - but coming up against a Veteran Guard division shook them up a bit as we ignored their defensive fire and a Stuka strikes to press home the attack. 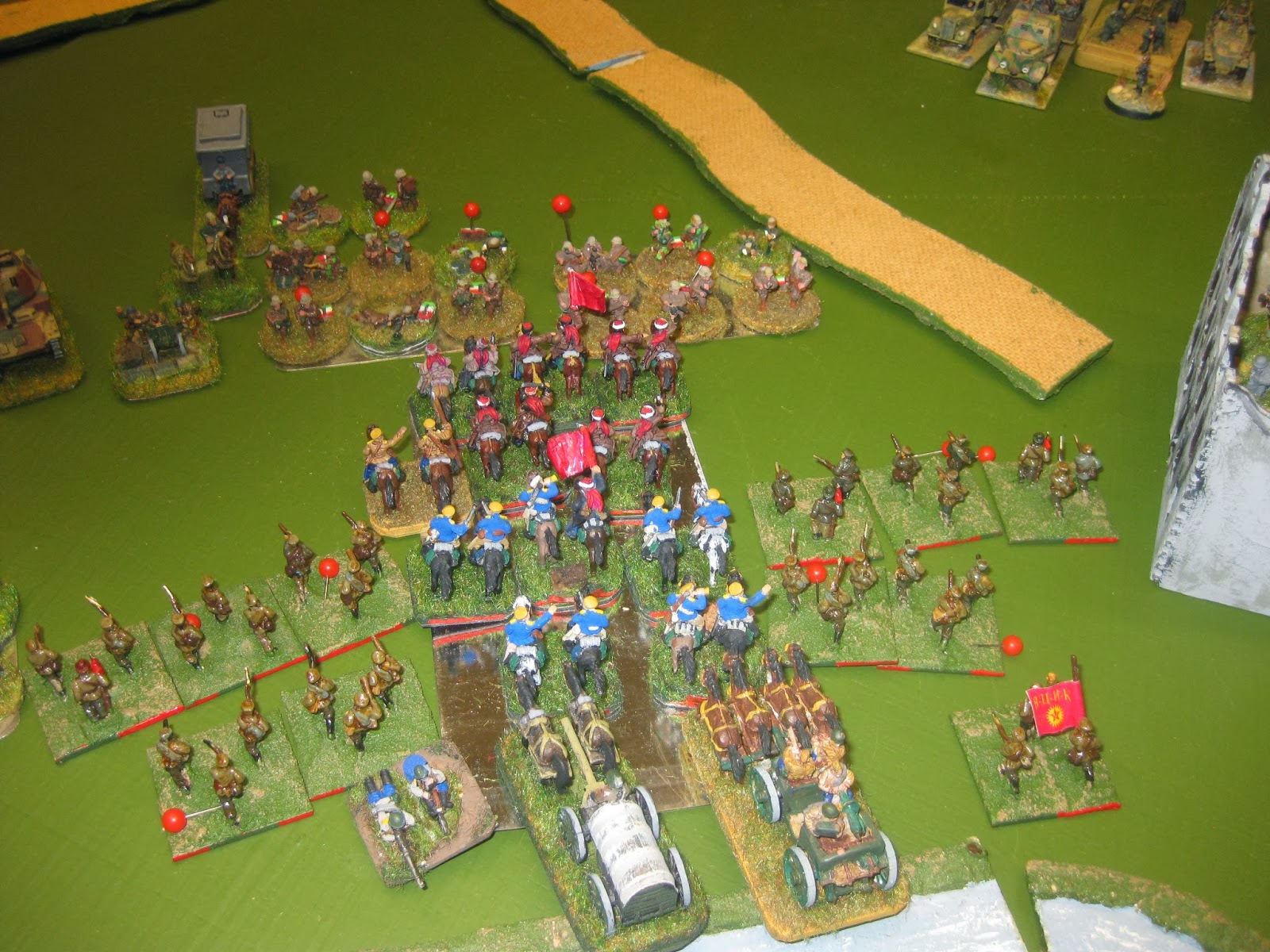 The Hungarian division next to Kharkov got the worst of the battle of the conscripts, and failed a morale check. Sensing blood the Cossacks stormed across the frozen river, sabres flashing in the early winter sunshine. It was glorious. I hope the cameras were rolling. 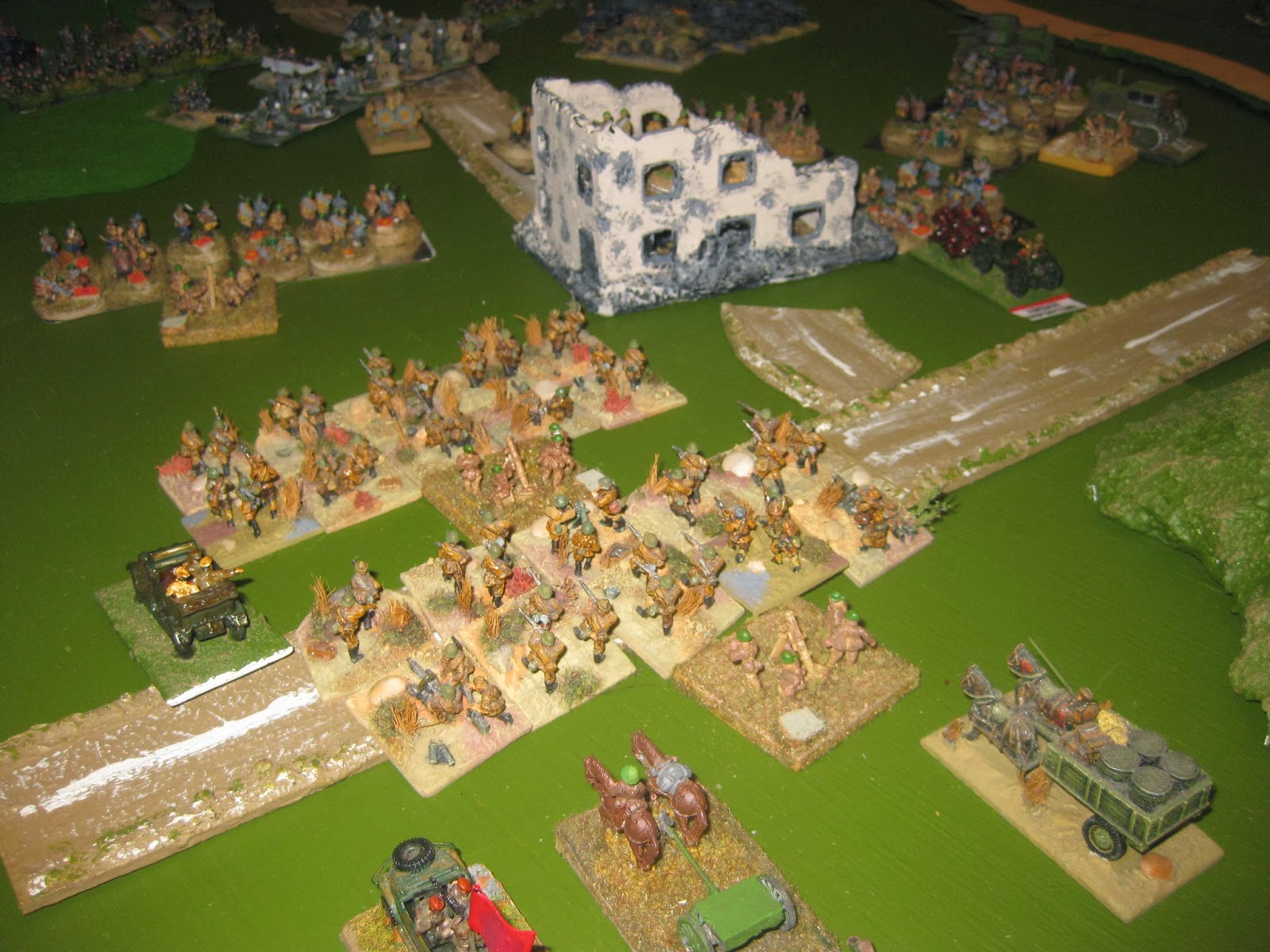 On my left General Will was ordered to press on with all speed towards Dneproptevosk. Or whatever. 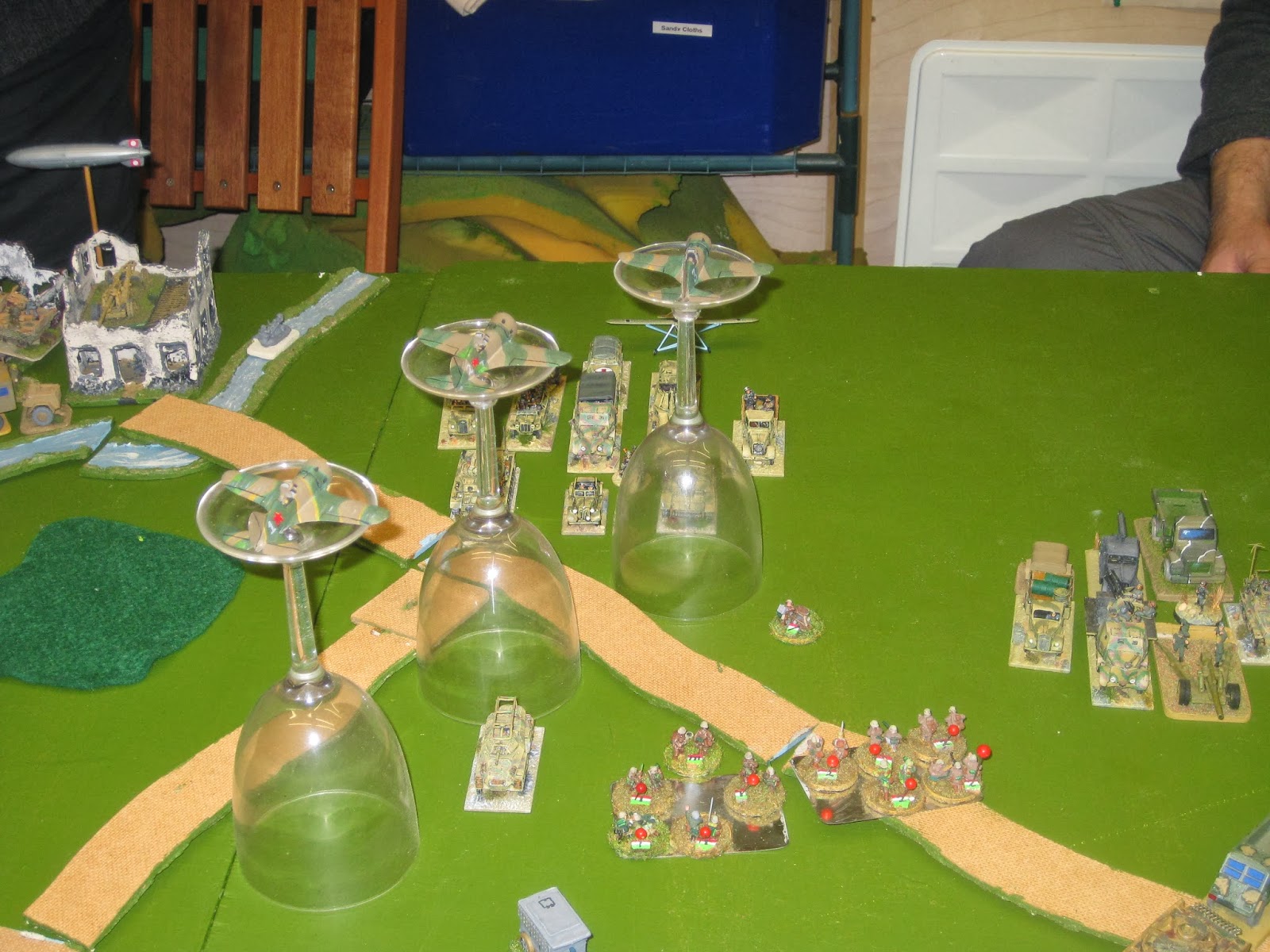 Will's attack and my central push was supported by the timely arrival of our air arm. Here's three vintage Ratas showing they're not past it. Much. The aim was to rough up the SS before they ran into my Cossacks. One hit doesn't really cut it, in that context. 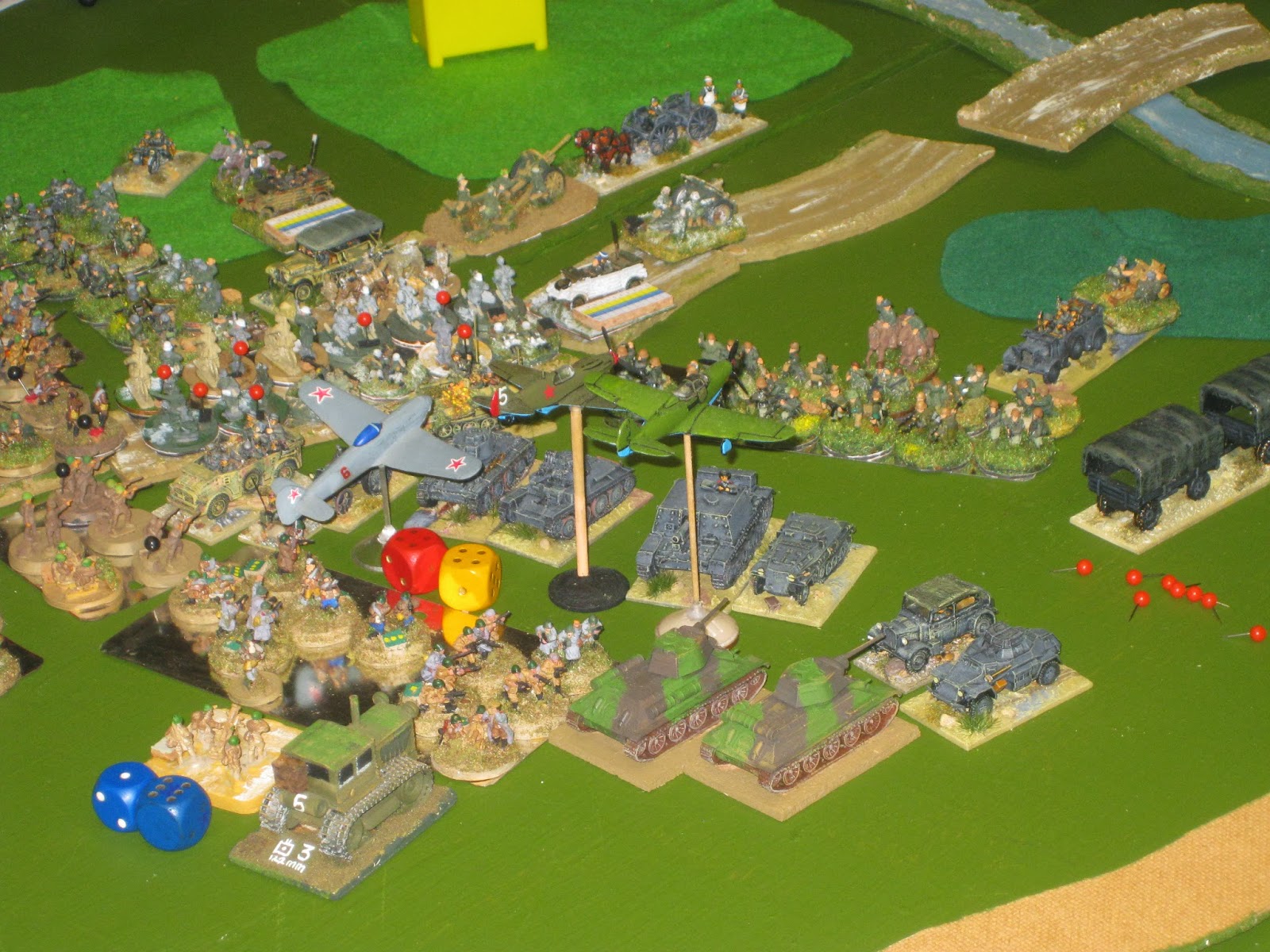 In the middle Will's air support was more successful, and the Germans took some damage and started to stumble backwards. The "Hitler Order" hasn't been given yet, but the way Richard was giving ground means it can't be far away. 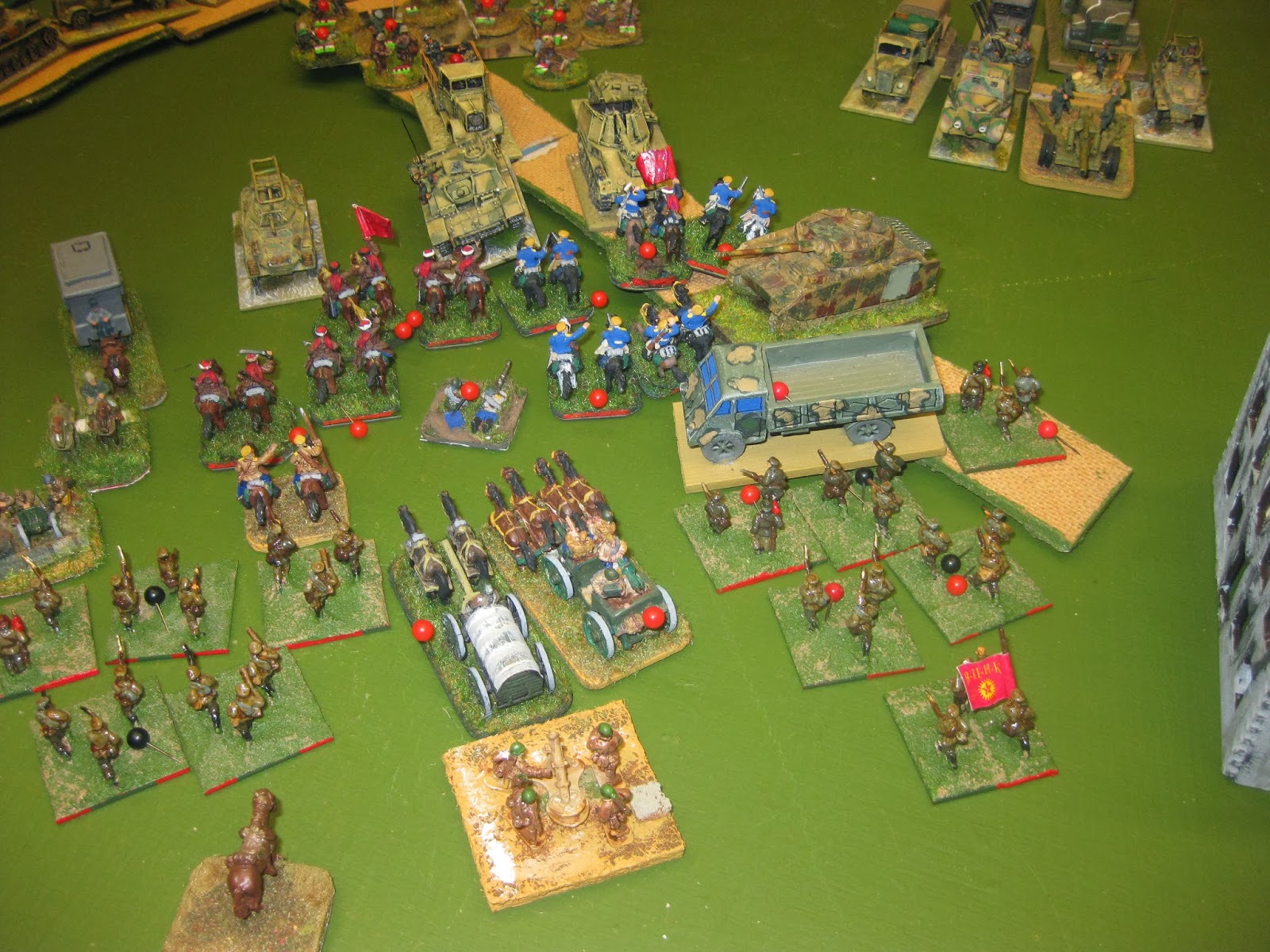 Phil's SS ploughed through the retiring Hungarians and hit my Cossacks pretty hard. For whoever holds the ground at the end of the battle horse meat is on the menu. 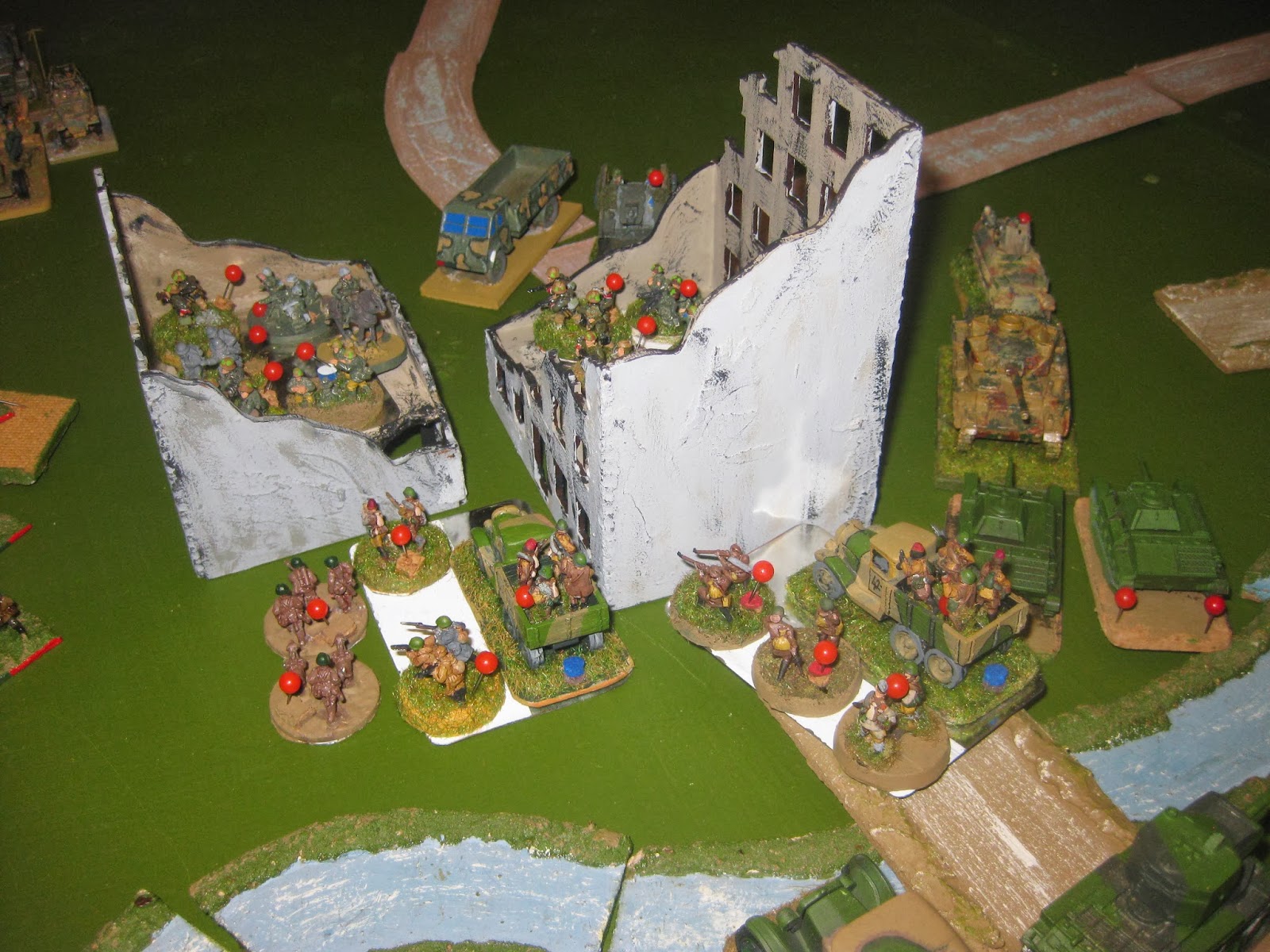 In Kharkov the fighting was intense but indecisive. The Guards had a foot hold, but had little to support them to exploit what they had achieved.

At that point we shut up shop for the evening, but leaving everything in situ to finish next week. I haven't really covered what Will was up to, and the breakthrough reserves are just being deployed.

Next week will be intense.

Email ThisBlogThis!Share to TwitterShare to FacebookShare to Pinterest
Labels: Not Quite Mechanised., NQM, wargaming, wargaming in sheds