A Quick Game of Armati

I don't think I've ever done an Armati game with classical Indians & Alexandrian Macedonians so I thought that might be fun. I worked out the standard 75 point armies but they looked a bit small, so I upped the points to a 100 aside. That gave the Indians lots of elephants and chariots and the Macedonians lots of phalangites.

Will turned up first and promptly took the Macedonians ("Because I'm in this side of the table" so he claimed). I rigged up the deployment curtain, - so much easier than drawing maps - and we shuffled figures around.

The Indians have a number of problems. The Macedonians are a more flexible army with a higher initiative. The Indians have mostly heavy units, so they're tight on divisions. In the end I put my archers in the middle of the table out of command. I guessed, correctly, that Will would put his phalanx in the middle of the table so I could stand and shoot at them whilst having more divisions on the flanks would mean I could win there then turn on the slow moving heavy foot.

The other problem for the Indians is they have no killer units. I mean, even their Heavy Cavalry only has a frontal FV of 3. The Heavy Chariots are quite useful, but they're not that quick. 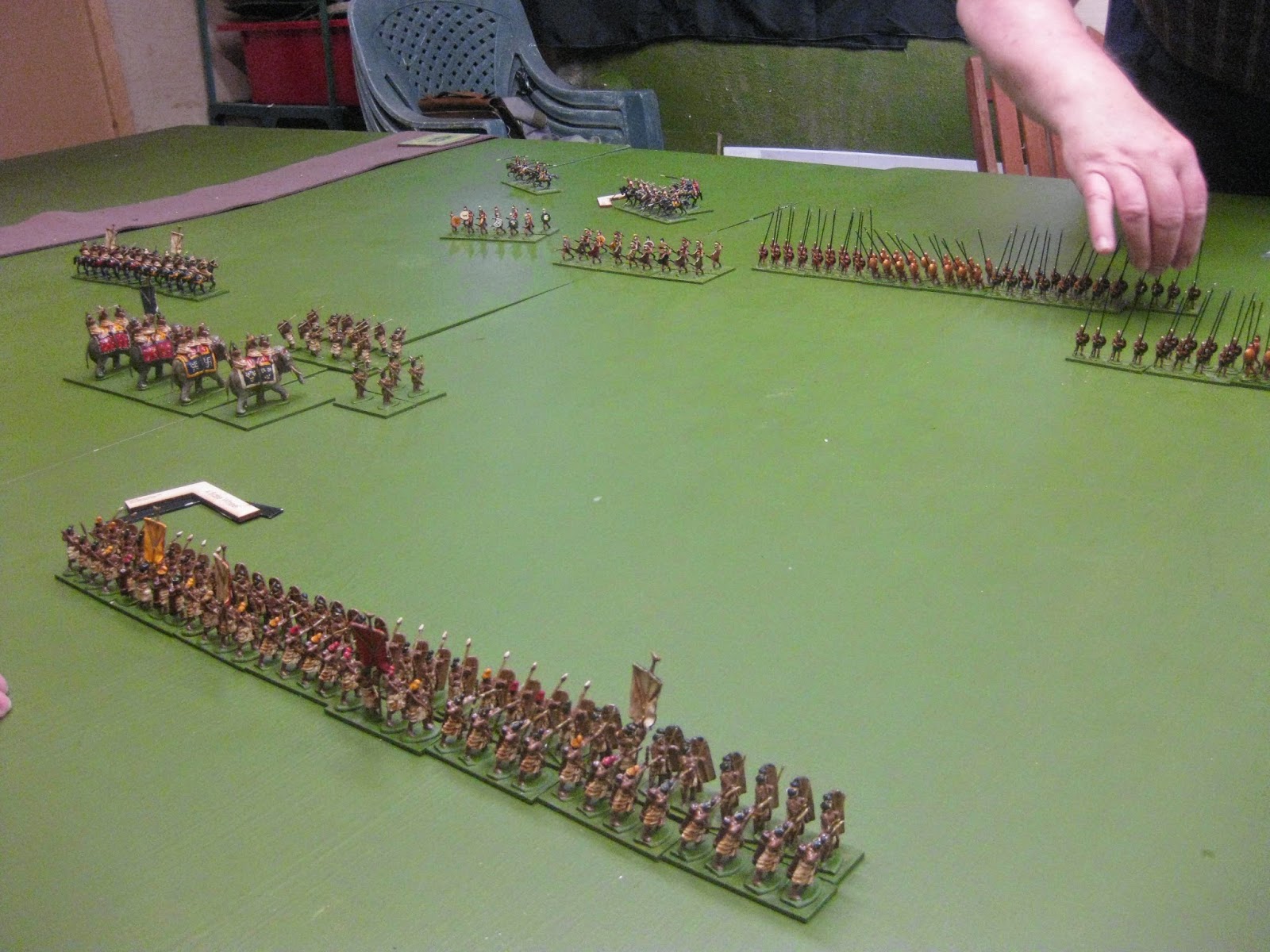 When the curtain was pulled back Will had got his deployment about right. He'd got light troops opposite the big elephant unit on our left, and his phalanx was extended sufficiently far to impede the mobile units on our right. Anyway, enough moaning and on with the game. We both headed towards each other as fast as possible. 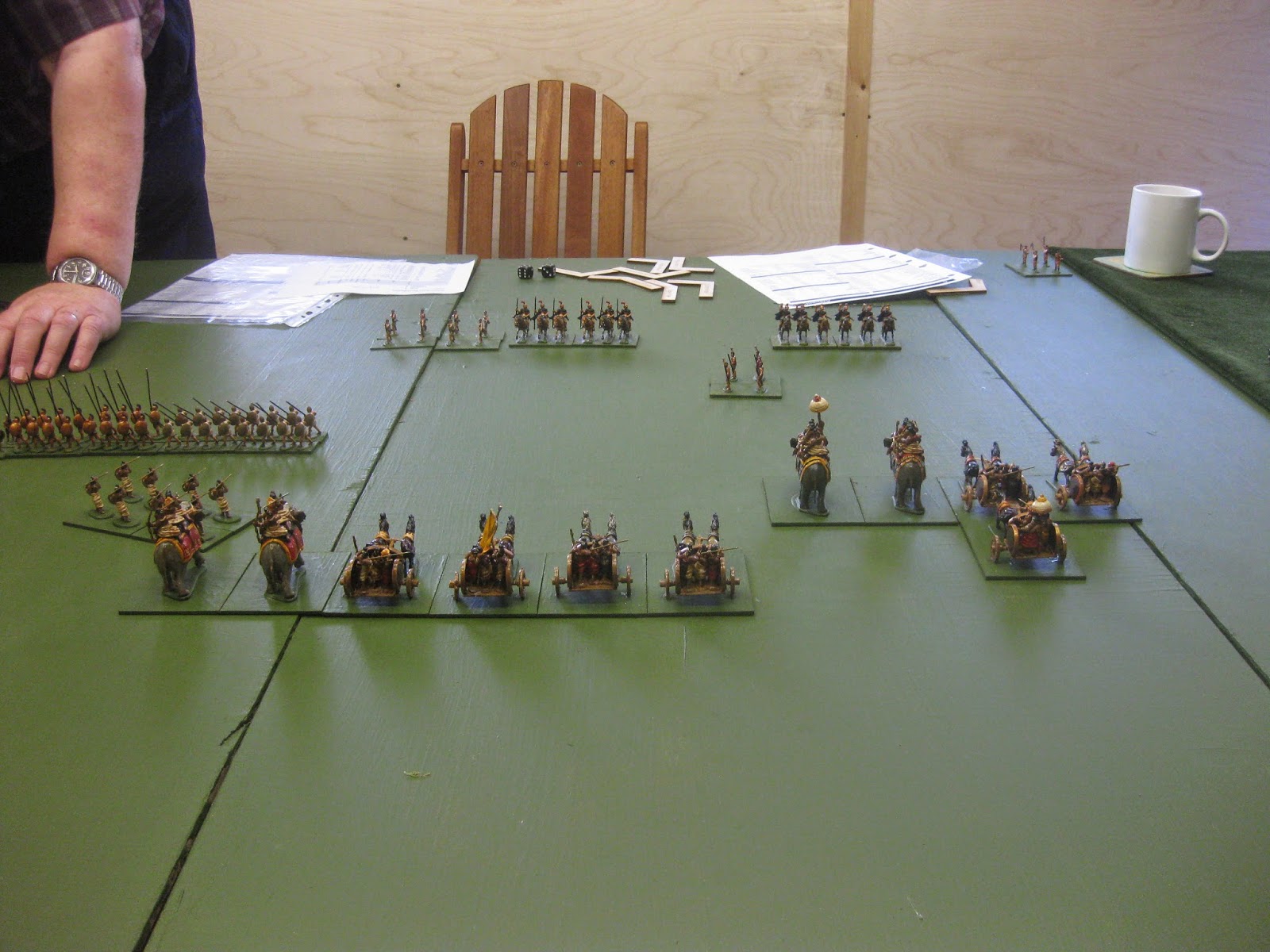 Now this is where I got it seriously wrong. I've trapped my skirmishers between my elephant and the phalanx. What's more I should have wheeled all my right wing out to the flank to avoid the phalanx. However I mis-estimated the distance and caught Will's problem from last week, - thinking in 2/3rds inches when we were using full ones. At this point Chris W turned up, and offered to help me out. I gave him the left wing. 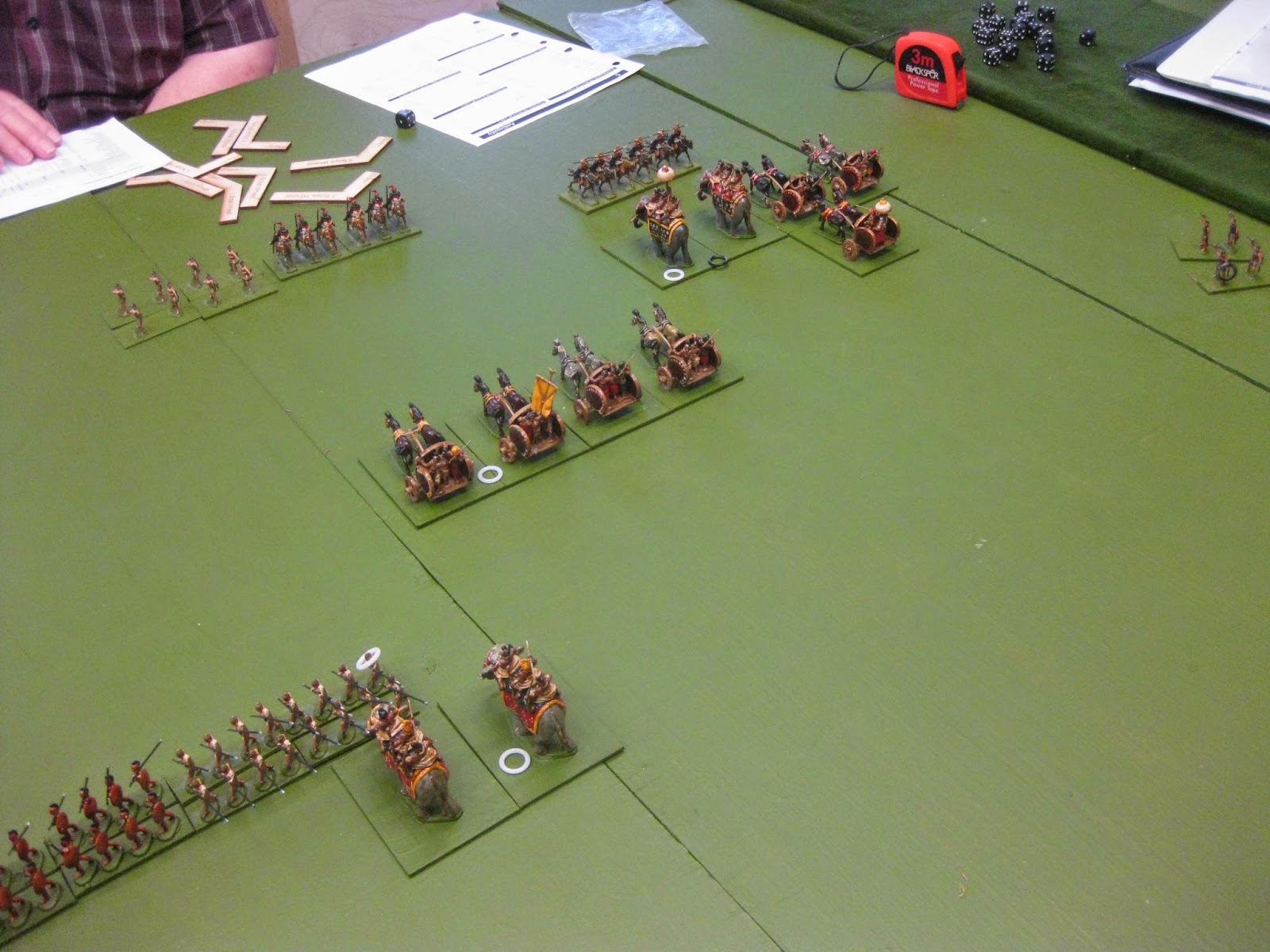 My elephants therefore clipped the end of the phalanx whilst my chariots roared onwards, clearing some light troops and heading towards the non-Companion heavy cavalry, which was refusing Will's left flank. This turned out to be really clever as it meant my most effective units (those chariots have bows as well) were fighting a long way from the main action. The elephant unit hitting the phalanx was a bust. Although it has impetus and will break the infantry if it outscores it alas it is at -2 on the dice versus the phalangites and duly lost the dice roll (it's odds are about 1 in 6 of winning this fight). 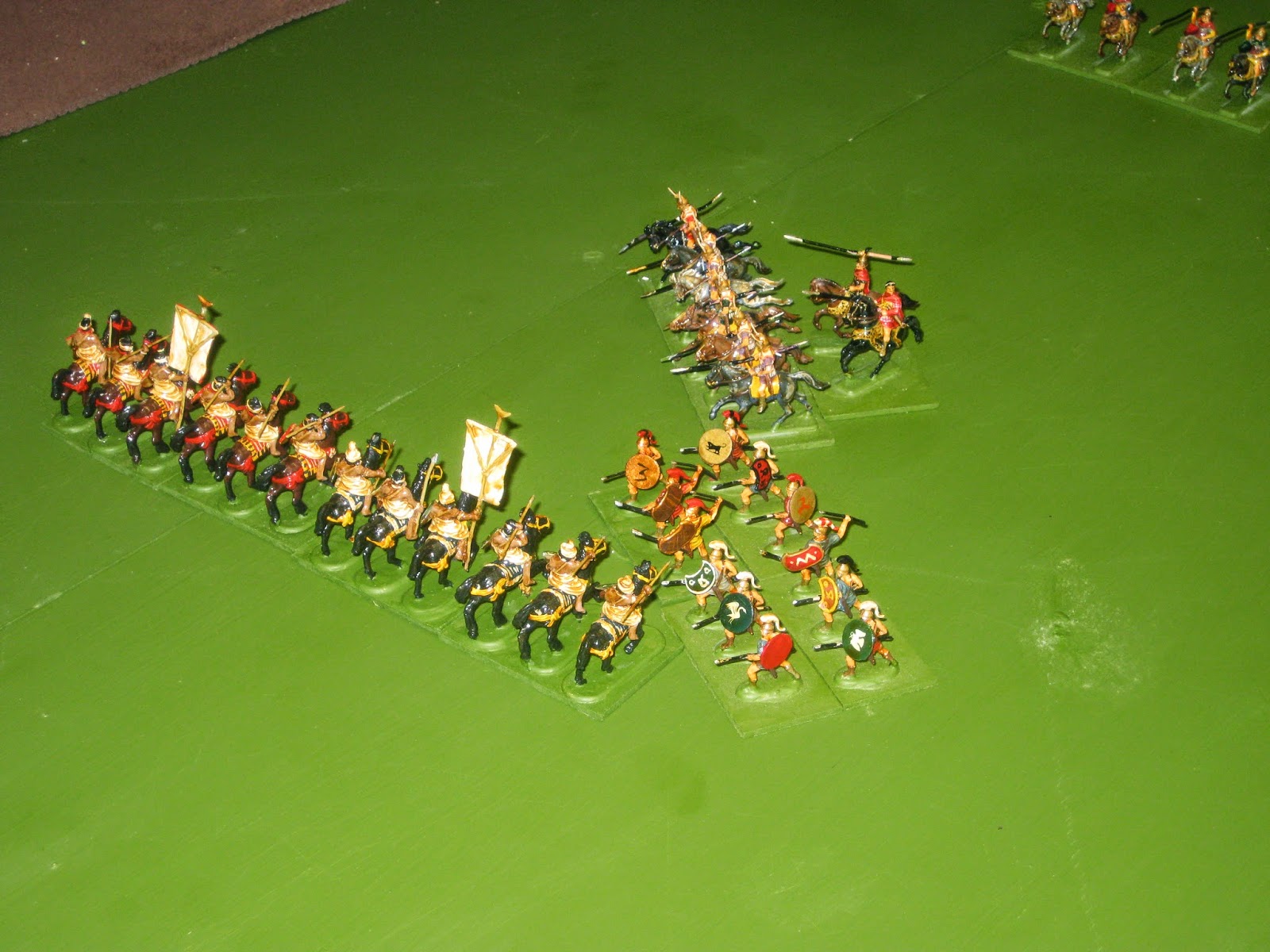 Chris on the left had pushed his cavalry up and was able to catch a single light infantry unit whilst Will was trying to get a 2:1 advantage. Chris, of course, has the impetus advantage here, but he's on a -1 against the peltasts and lost the die roll. See what I mean about lack of killer units? Even missed with the javelins.

Talking of missing our massed archery was singularly ineffective as well. 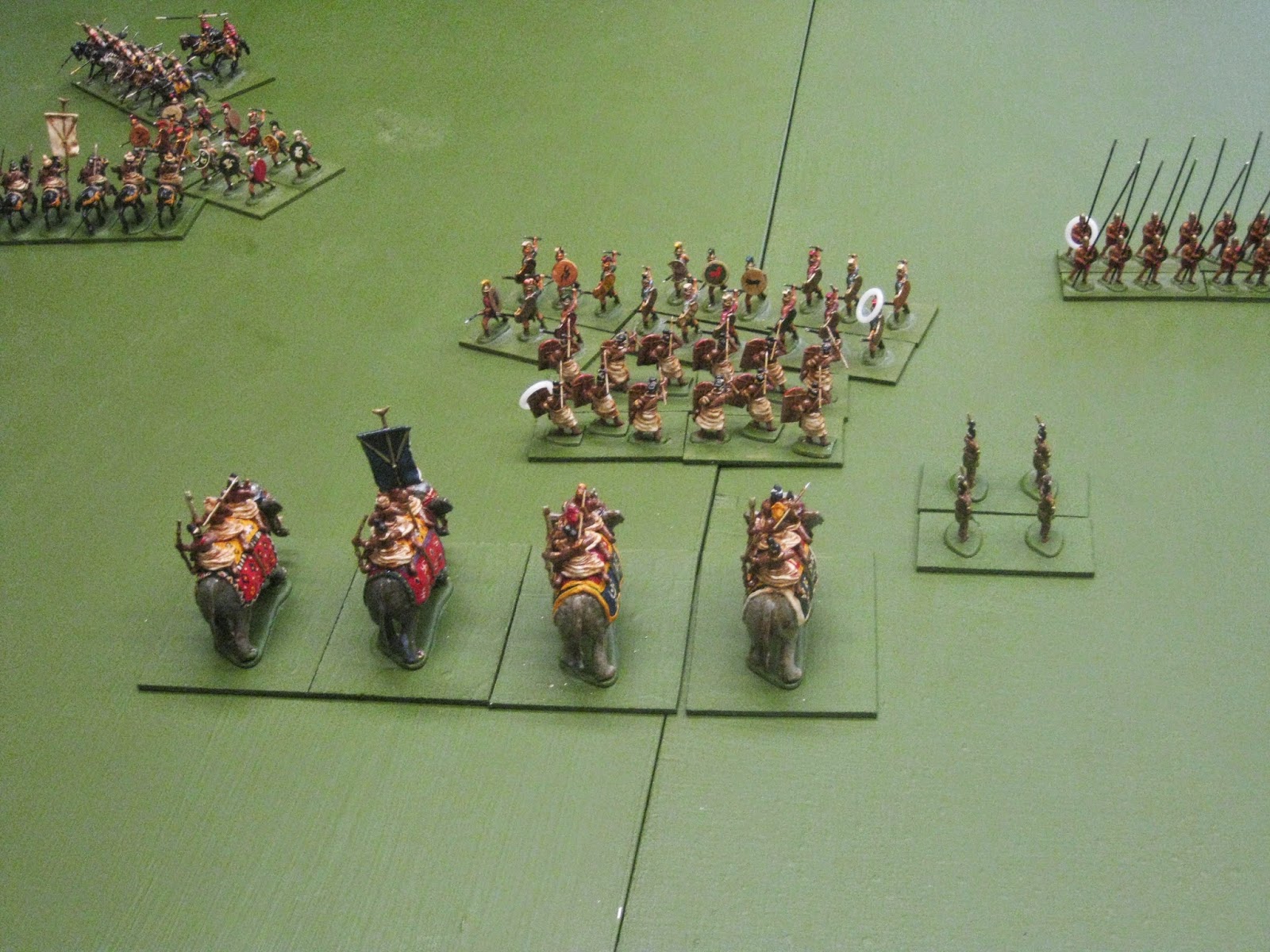 Our left hand elephants had a light infantry screen to soften up the peltasts so that the elephants could finish them off, before turning on the flank of the phalanx. Alas, although fighting on equal terms they were rubbish in this game. 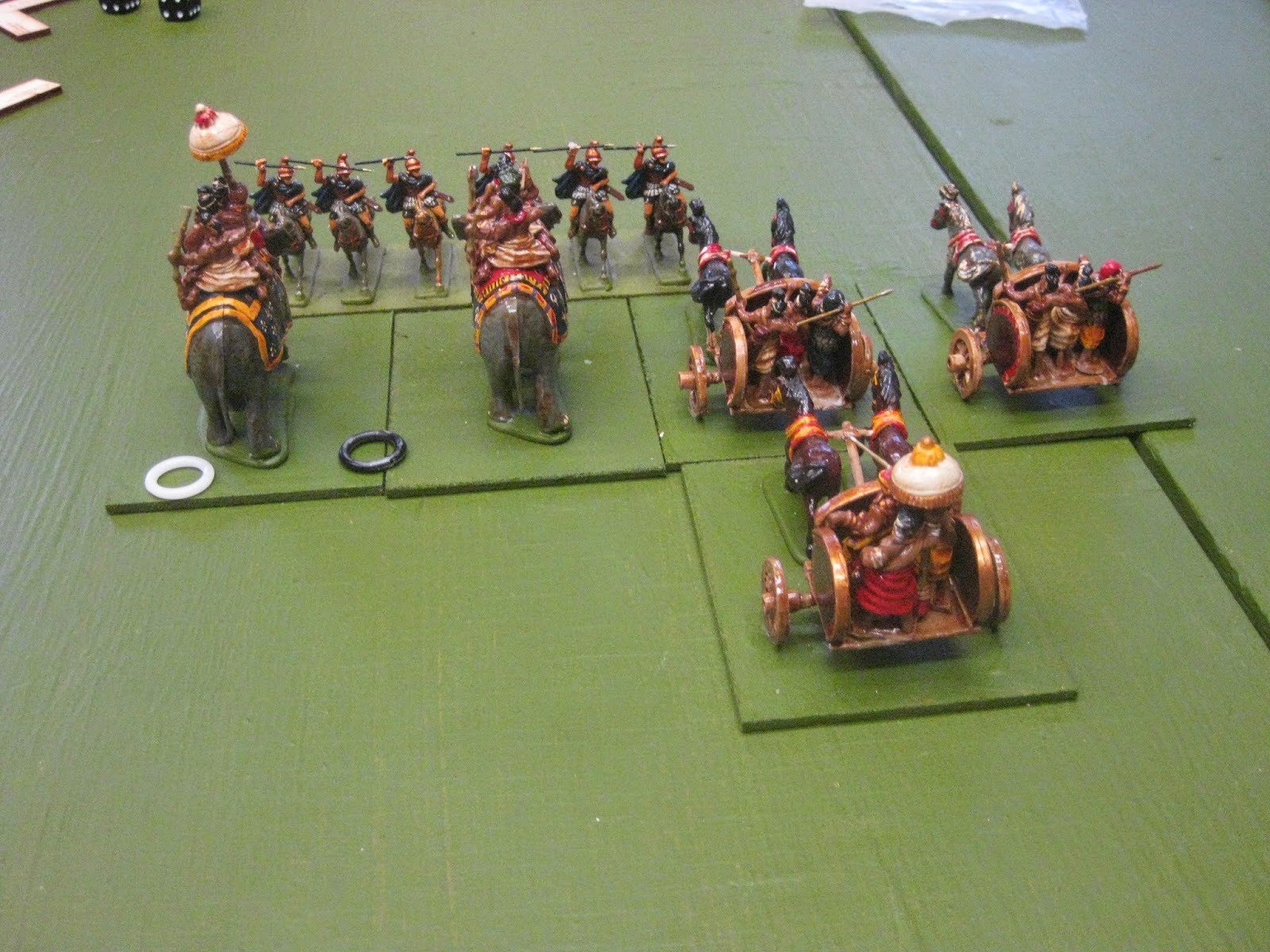 I did manage to get both elephants and General-lead chariots into Will's left flank cavalry, however, and gave them a good seeing to. 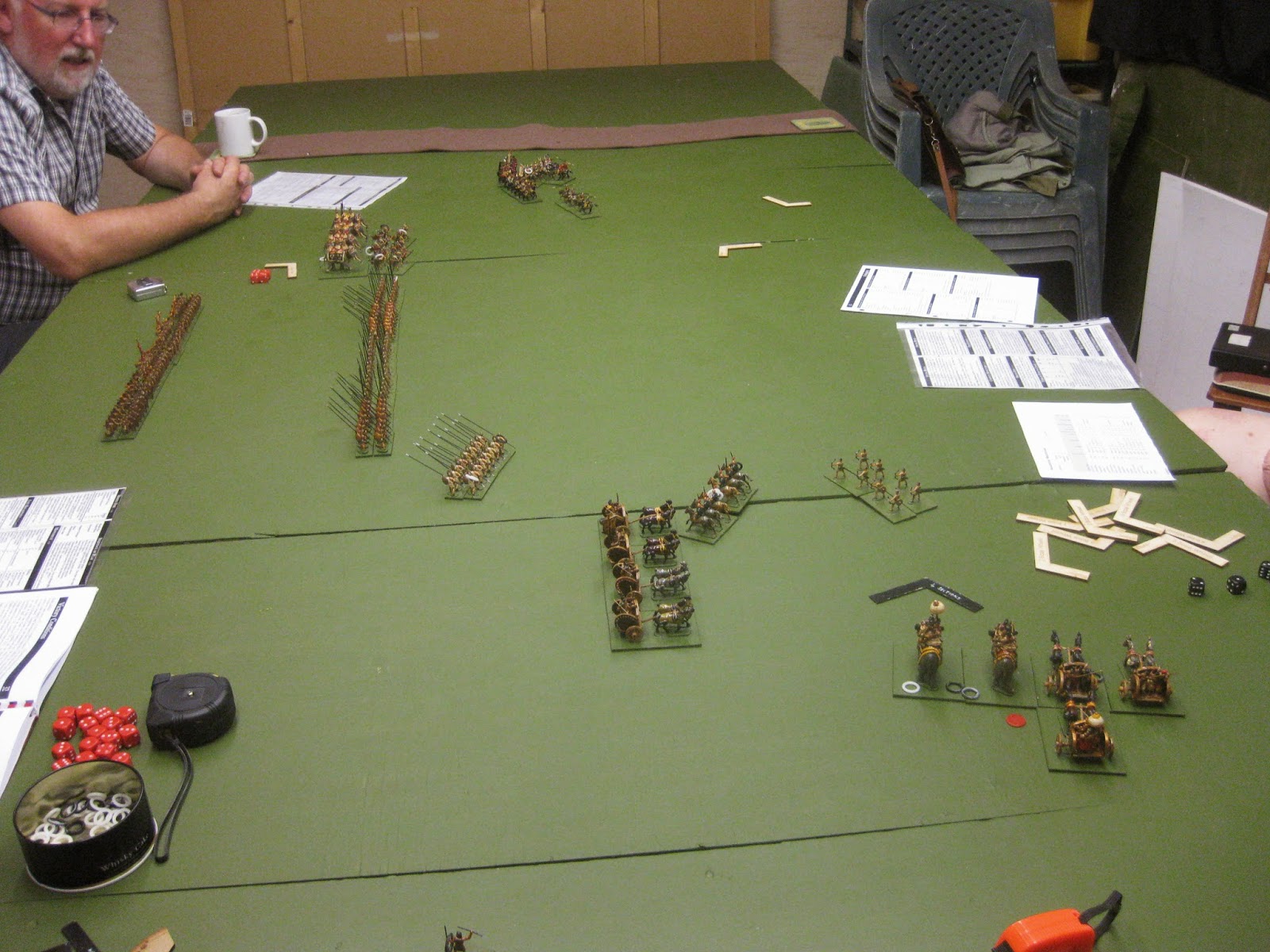 In the distance you can see that our light infantry has been eliminated and the peltasts are now mashing up our elephants. Our cavalry has now been hit by Alexander and the Companions. I'm sure it'll be fine. On my flank I've broken one cavalry unit and I'm in the process of swinging the elephant/chariot unit round to help out in the middle. My other chariots are finishing off another Greek heavy cavalry unit. My elephant has been killed by the phalangites, who have now about faced to become a flank guard for the main phalanx. As you can see, 5 rounds of shooting with 4 units inflicted 2 hits. The odds say a minimum of 4 should be expected. Still, maybe the melee will go our way? 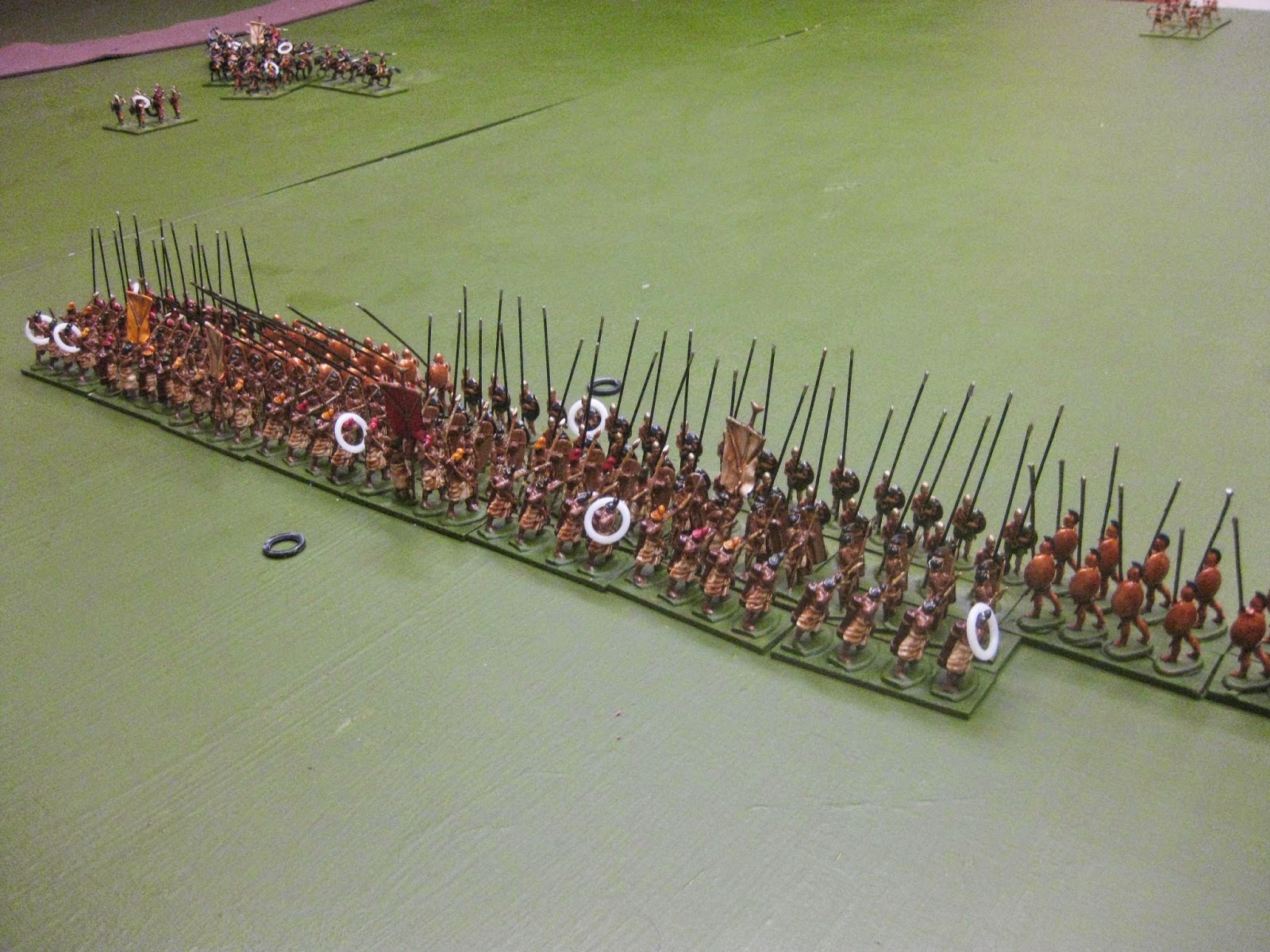 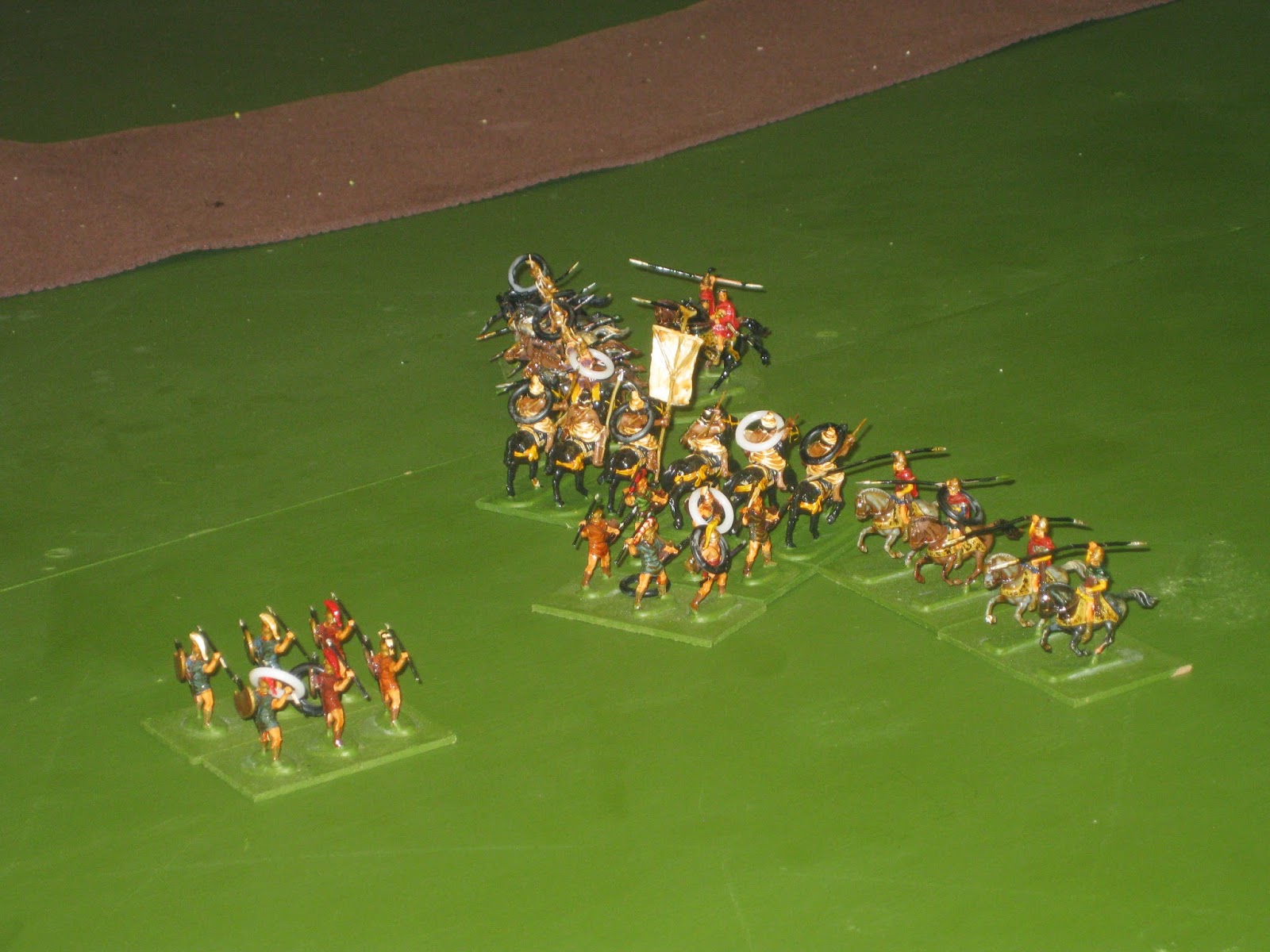 And then the cavalry on our right are eliminated, together with the elephants and we're through our breakpoint in about 2 hours of game play. Final score 5 : 2 to the Macedonians.

I will admit to making a few mistakes, and the dice didn't go our way. After all, I've seen armies with fewer missile units than this one destroy an opponent. Still, no point in complaining about a random element in a game. It's put there to make things more...random.

If I haven't mentioned it before I was part of the playtesters/army list writing crew for Armati 2. It was quite a fraught time and I didn't play all the armies. Those I could play, I did, and commented back. I never tried the Indians, for example, and I think the list has issues. The Armati points system formula is published and is transparent. My main criticism of it is that the points cost to an army of extra divisions and more initiative is not in proportion to its effect.

Some armies suffer because their historical counterpart had problems. The Ancient Brits, for example, were notoriously useless, having lots of lightweight warbands that got in each other's way. The fix, - allowing core units to deploy in flank zones - was my idea and helps a lot whilst not putting in ahistorical units.

I love Armati as a rule set, but sometimes it is a little bit infuriating.
Posted by Trebian at 14:21