Classic confrontation for Wednesday Evening, - Greeks & Persians under Armati 2. I maxed out the Greeks on light troops to get them an extra division, and put as many good quality heavy infantry units into the Persians as I could. Then waited for the players.

We were due four of us for the evening. Will & Chris W made it for 8 o'clock - just about - so I put them together. They chose the Greeks  - "fewer troop types to confuse us" as Chris W said. 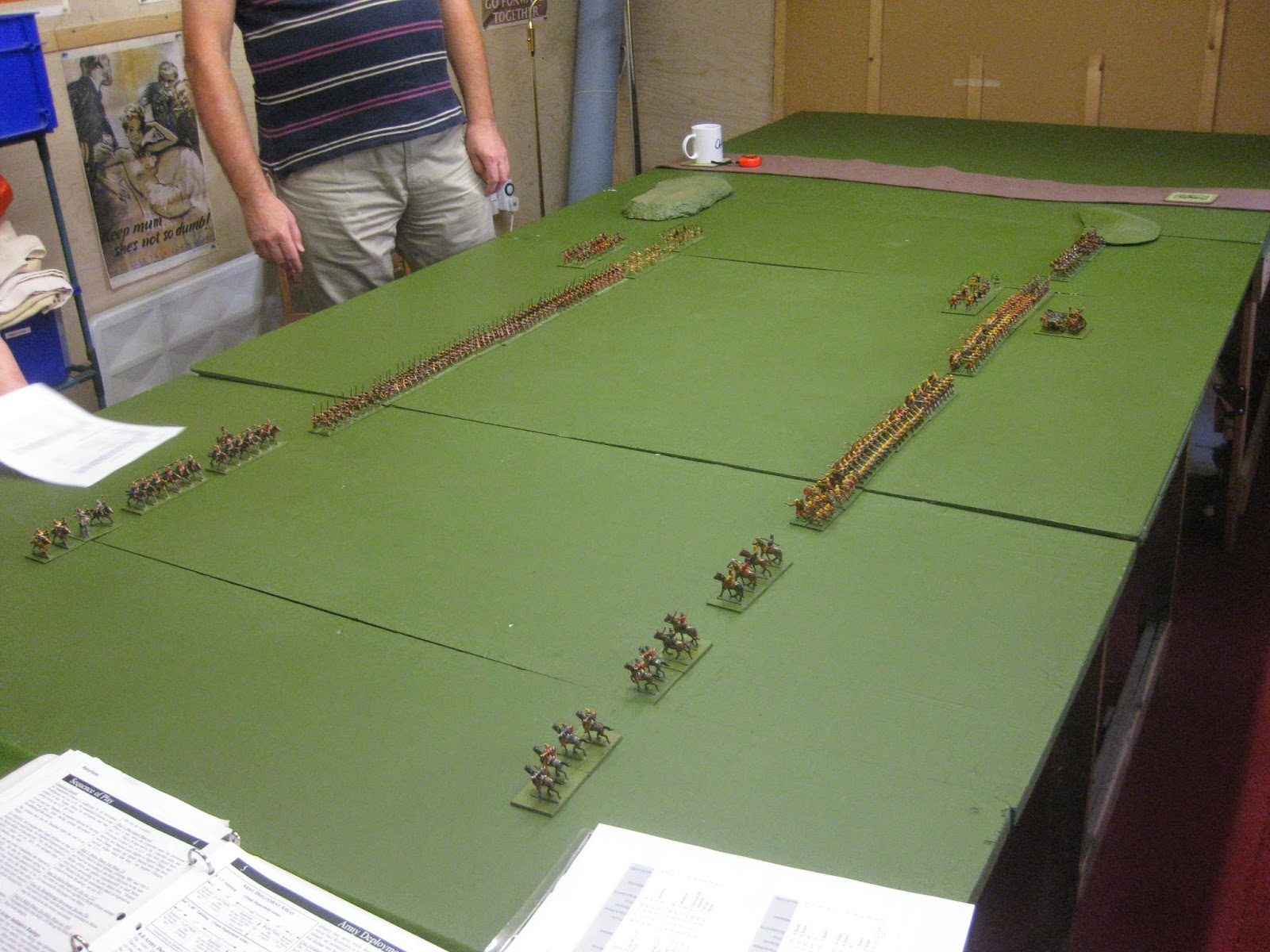 The picture above gives an idea of the army compositions. I then put up the deployment curtain and we shuffled stuff about. There aren't as many pictures of this game as usual as I was actively involved most of the time. 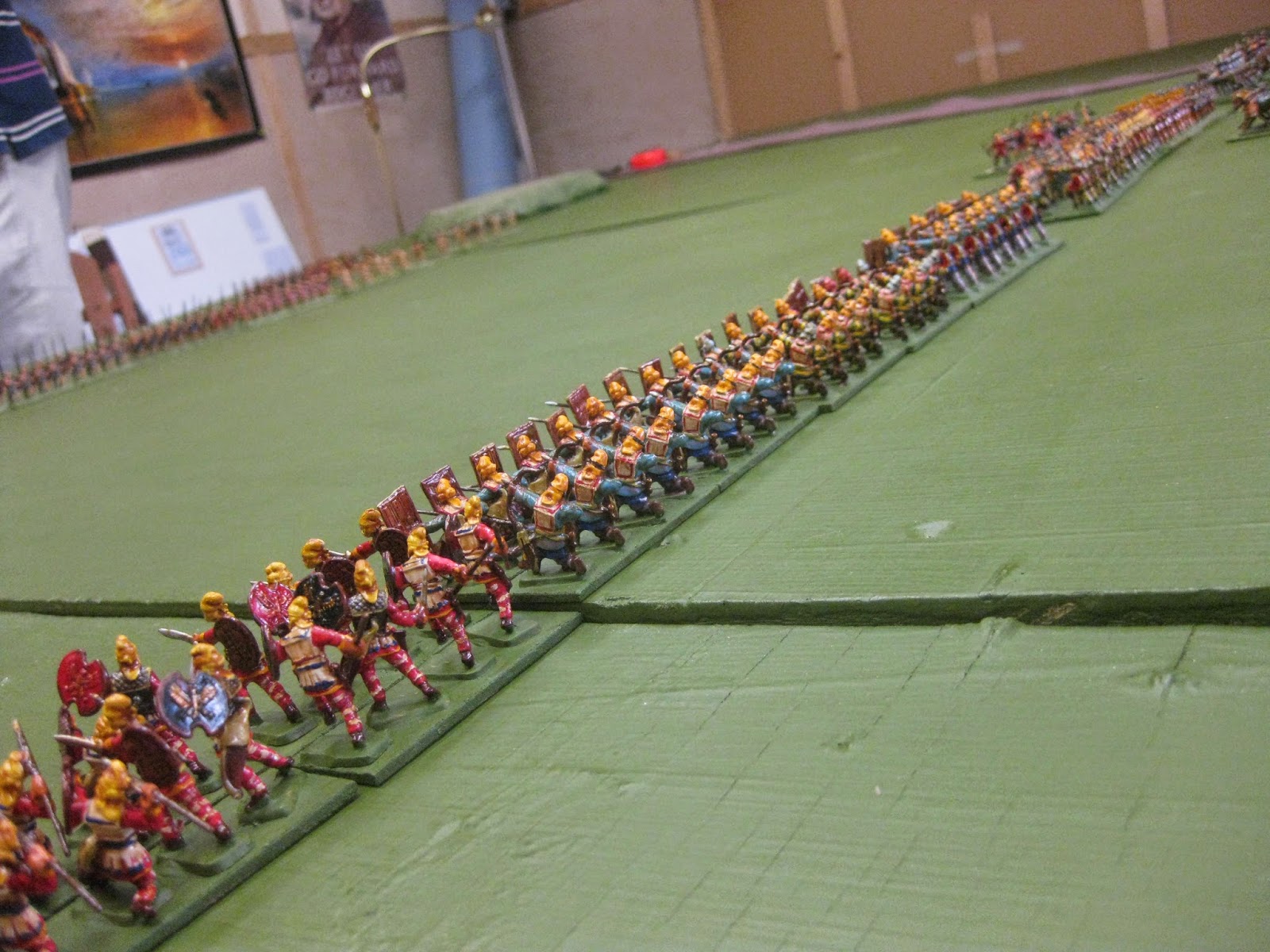 This is just a picture of my massed Persian infantry. Great, aren't they? 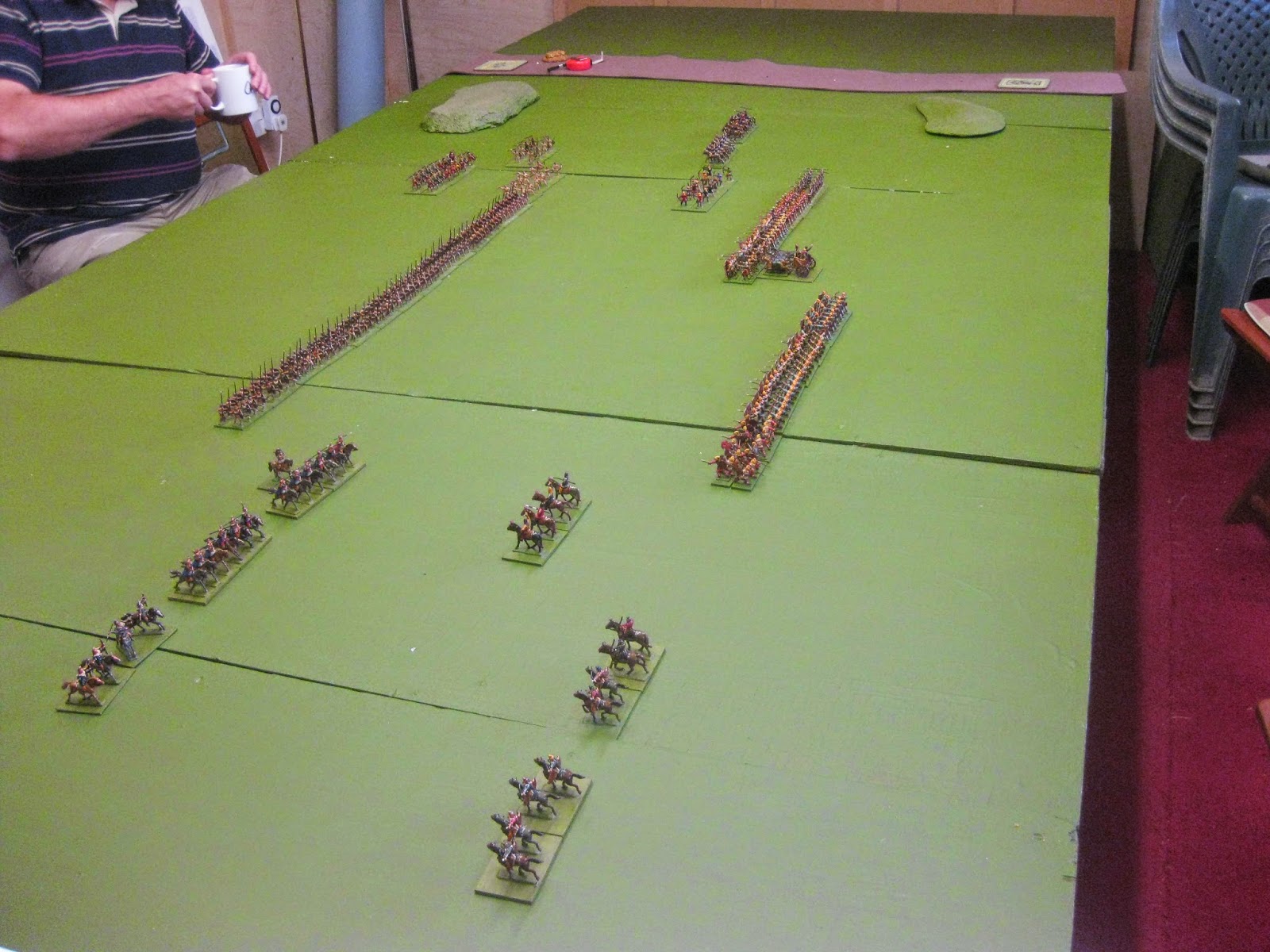 First move over. I'm refusing the left and attacking with my quality infantry (Immortals & hoplites) and heavy cavalry on the right. I'm hoping to play tag with my light cavalry on my left, but I'm not very good at that sort of thing. Will and Chris W were hoping to sweep away my left wing with their massed cavalry and dodge about on their left with peltasts and other lights, whilst sweeping away my middle with loads of hoplites. 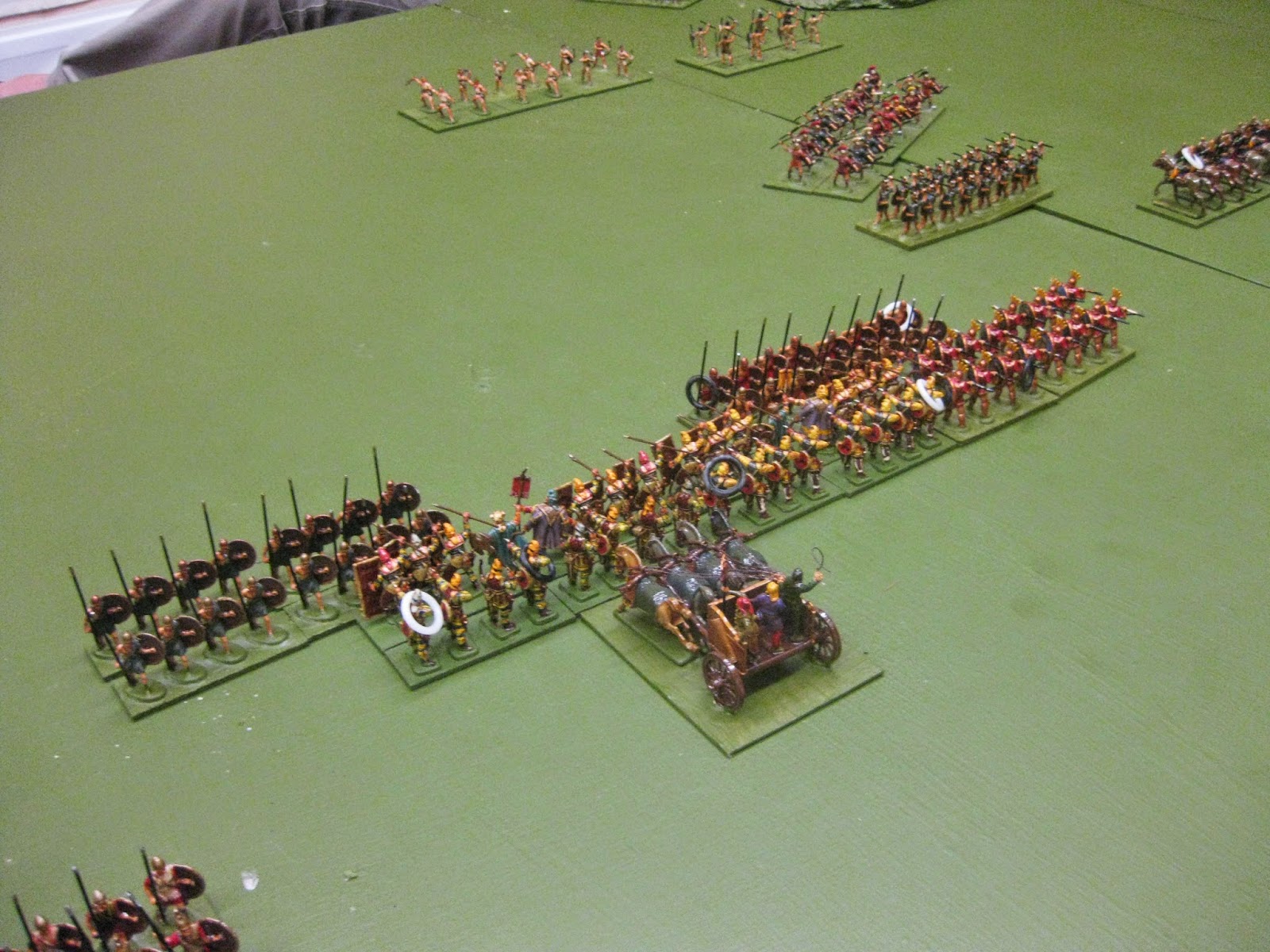 Chris K turned up at this point having got over from his weekly posting out to the wilds of Peterborough. I rewarded him with command of the Persian right. He quickly punched a hole in the middle of their phalanx (which has split on contact) and sent some hoplites off to to drive away the peltasts and free up the cavalry for a sweeping manoeuvre. At this point I saw we had a problem. We needed to kill four Greek units (as did the Greeks), and there were only three on our right where we had an advantage. On our left, where the Greeks outgunned us, there were loads of units. Hmm. 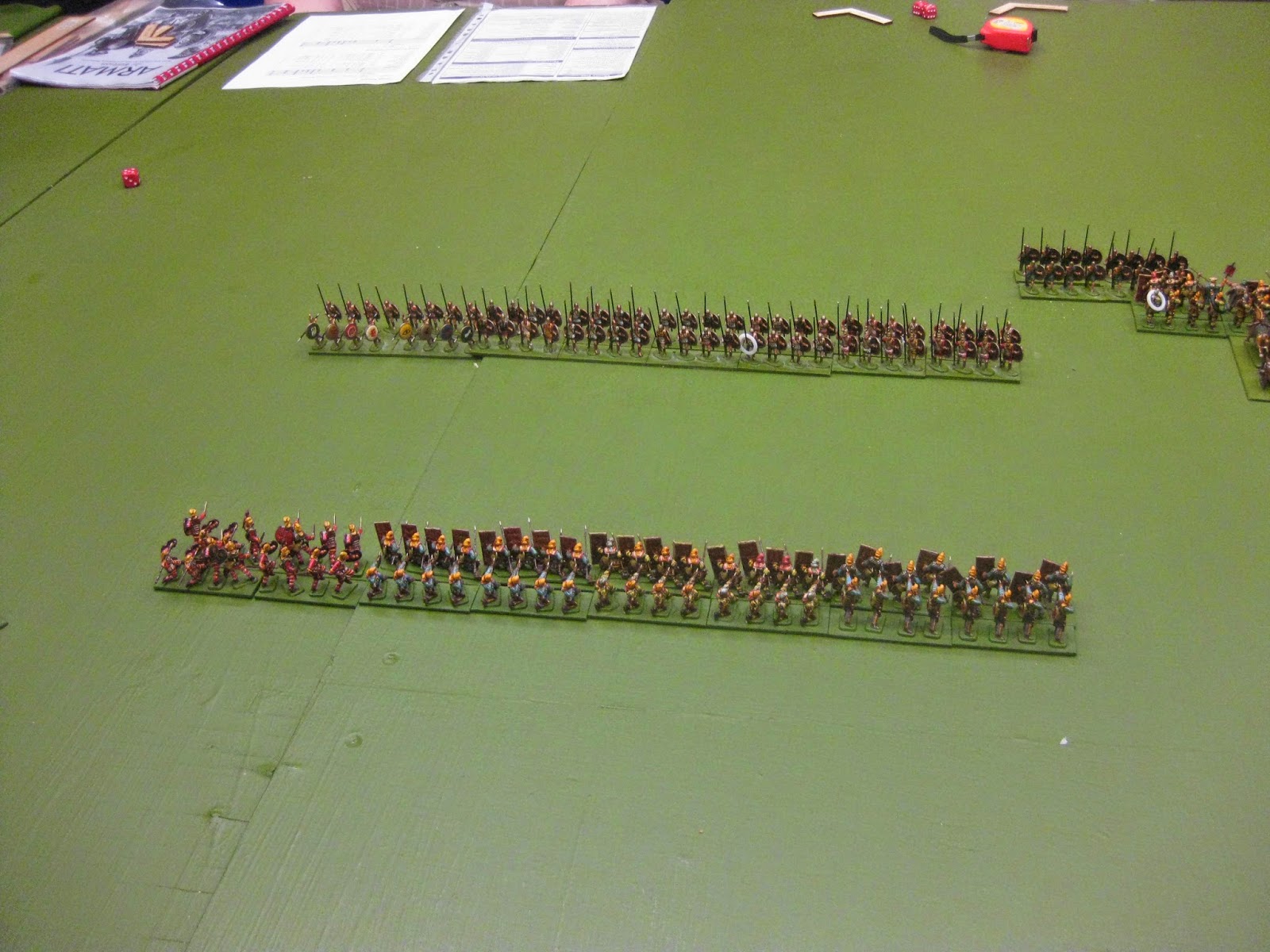 The phalanx bears down on my Sparabara and subject infantry. They're shooting away like mad, but with little effect. Off to their left my light cavalry are pretty much pinned back on the base line, and are being destroyed. They are delaying the inevitable as long as they can, but it's all pretty desperate stuff. Will finally manages to free up one of his heavy cavalry units and about face it to charge my rear. 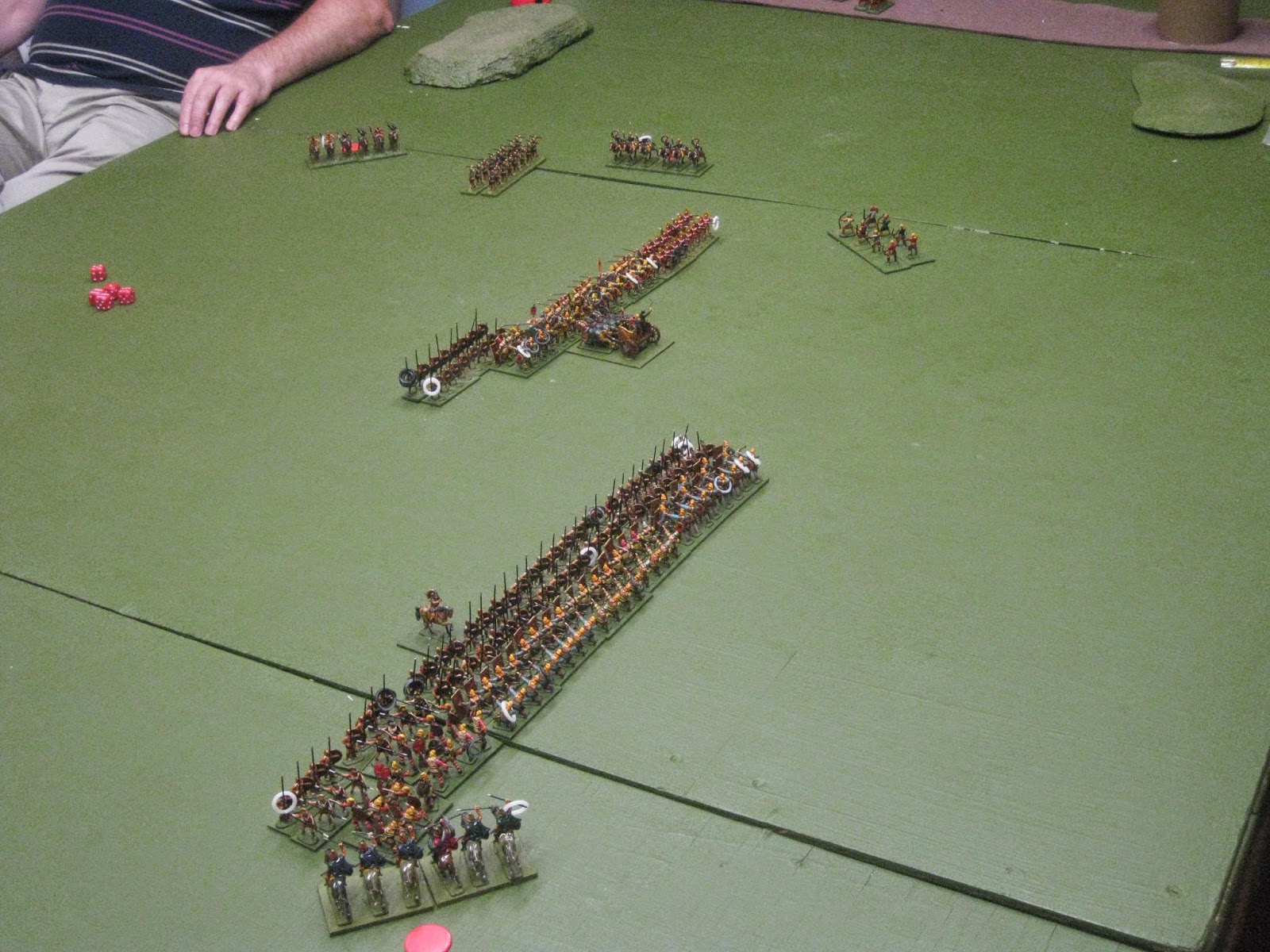 There's lots going on in this picture. Chris K has got his cavalry round over the hill and charged the peltasts in the flank whilst they are pinned to the front by the advancing hoplites. A series of failed "routed into" tests removes them all from the board, along with their skirmishing friends. We now have two heavy cavalry units out on that flank to bring back into the fray. We've reduced their left wing phalanx to one unit. It will die next turn, but Xerxes will also die in the combat. Will, as I said above, has put an undressed cavalry unit into the rear of my subject infantry, having detached his general and added him to one of the hoplite units to bolster their chances of hitting.

His infantry units are 1 or 2 points up all along the line here. Nearest the camera are some Spartan infantry, who should be putting their opponents through the mincer. As you can see they took a hit in the first round, hence Will putting in his cavalry before they were reformed.

In the face of all the odds the rubbish Persian infantry hold off to front and rear, which is a nuisance to Will, as it means he doesn't break them with impetus from the cavalry. I survive another turn. 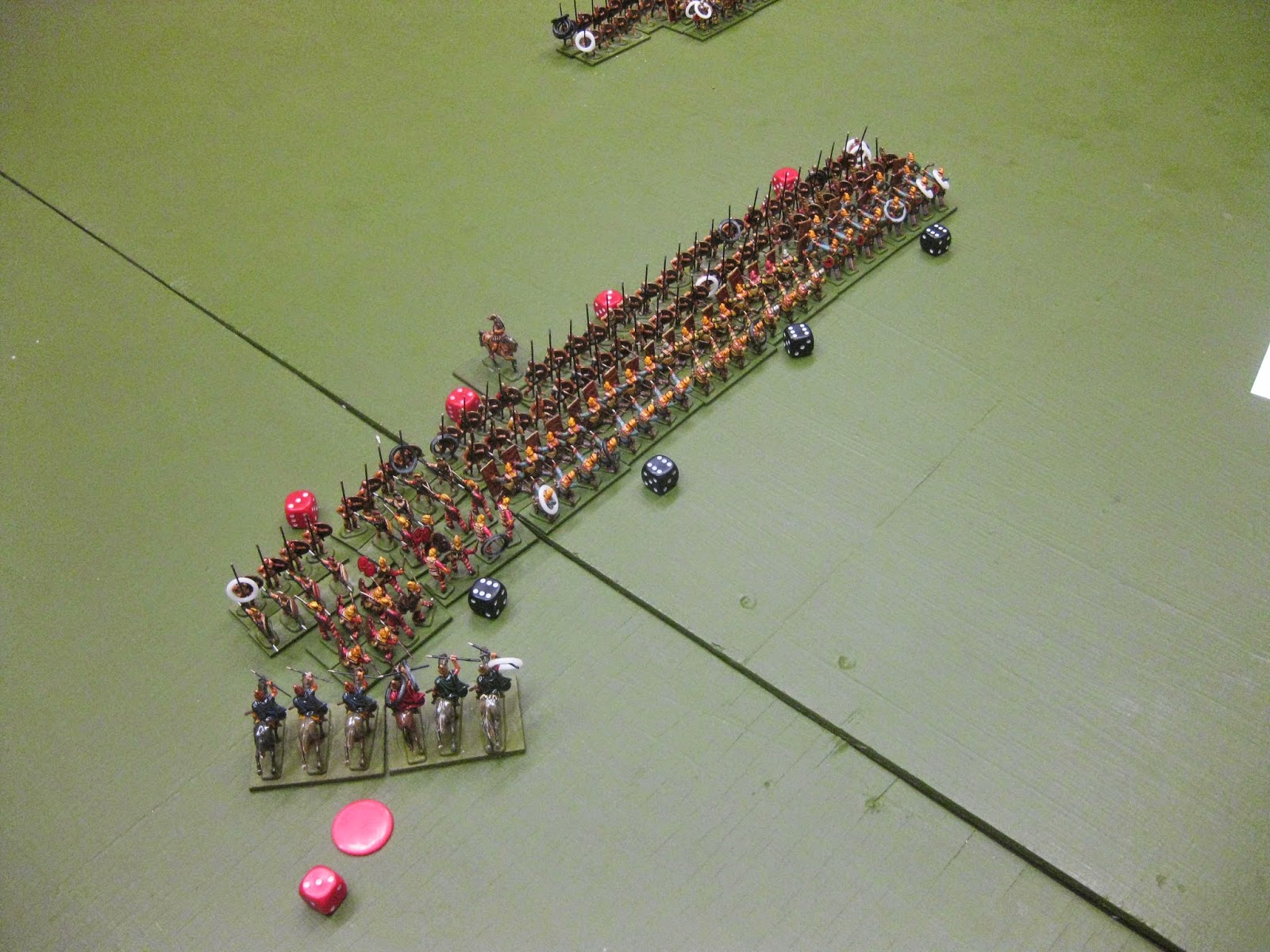 This is the final turn. Every unit in my line rolls a 6. Will is....less lucky. Off screen to the top, Chris also breaks the last hoplite unit on his wing, meaning we've killed three units and are looking for our fourth. 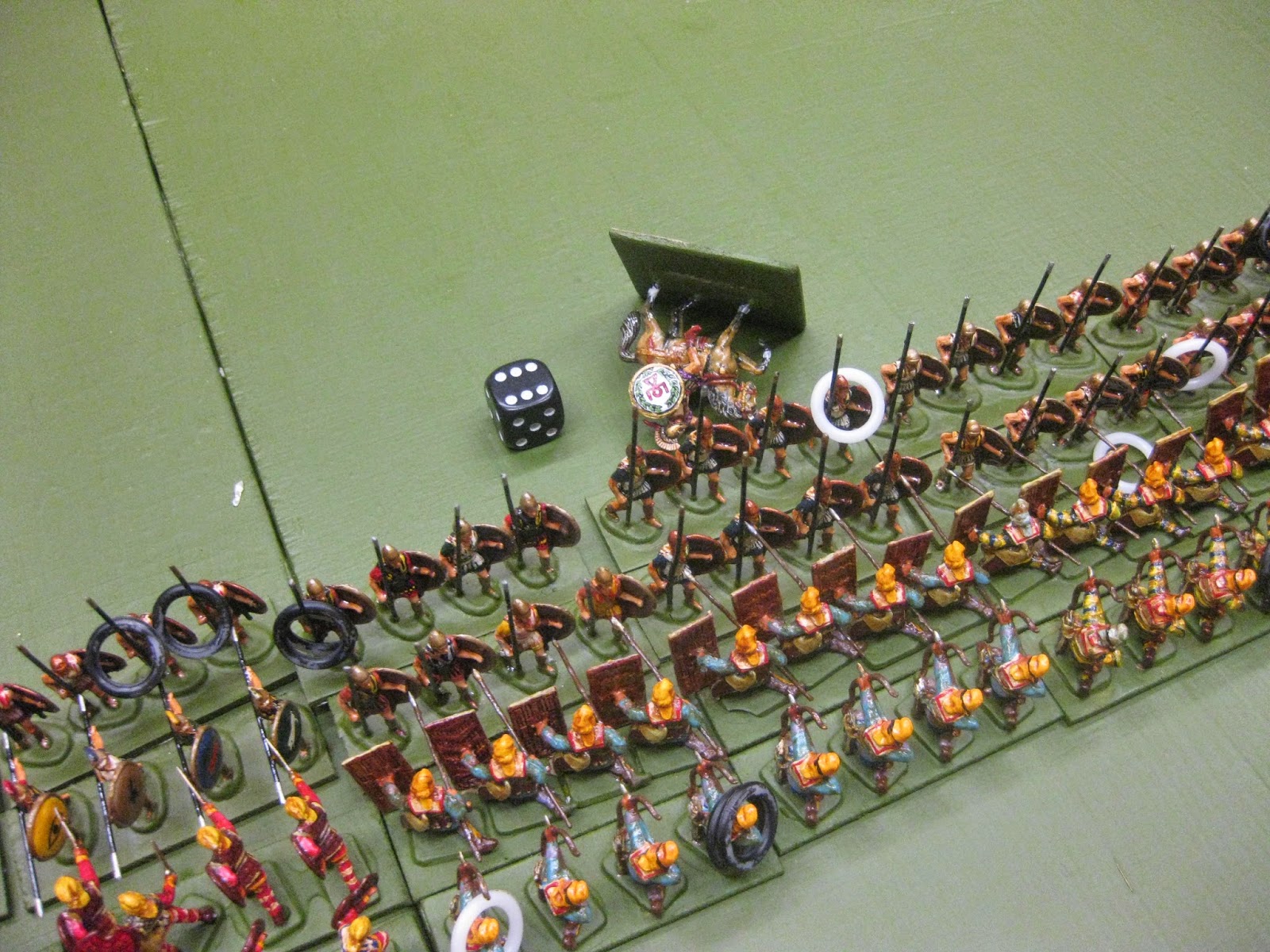 Which I duly get by rolling a fifth successive six to kill Will's general, having inflicted a hit on his unit. Stunning victory against the odds.

An exciting game that we won mainly by dumb luck. However, if we had not killed the general at this point we'd have had our cavalry piling into the hoplite rear in about two moves, so we would probably have held on for a win, but in a much closer game.

A good, quick game with armies I will re-use in the near future, I think. I'll look again at the army components as my painting schedule advances. Next game I may well max out the Persian cavalry and see where that gets us.
Posted by Trebian at 11:27