Squares in the Sudan

Due to unforeseen circumstances I ended up with no players this Wednesday evening. No worries, the system plays pretty well as a solo set of rules, so I played it through anyway. 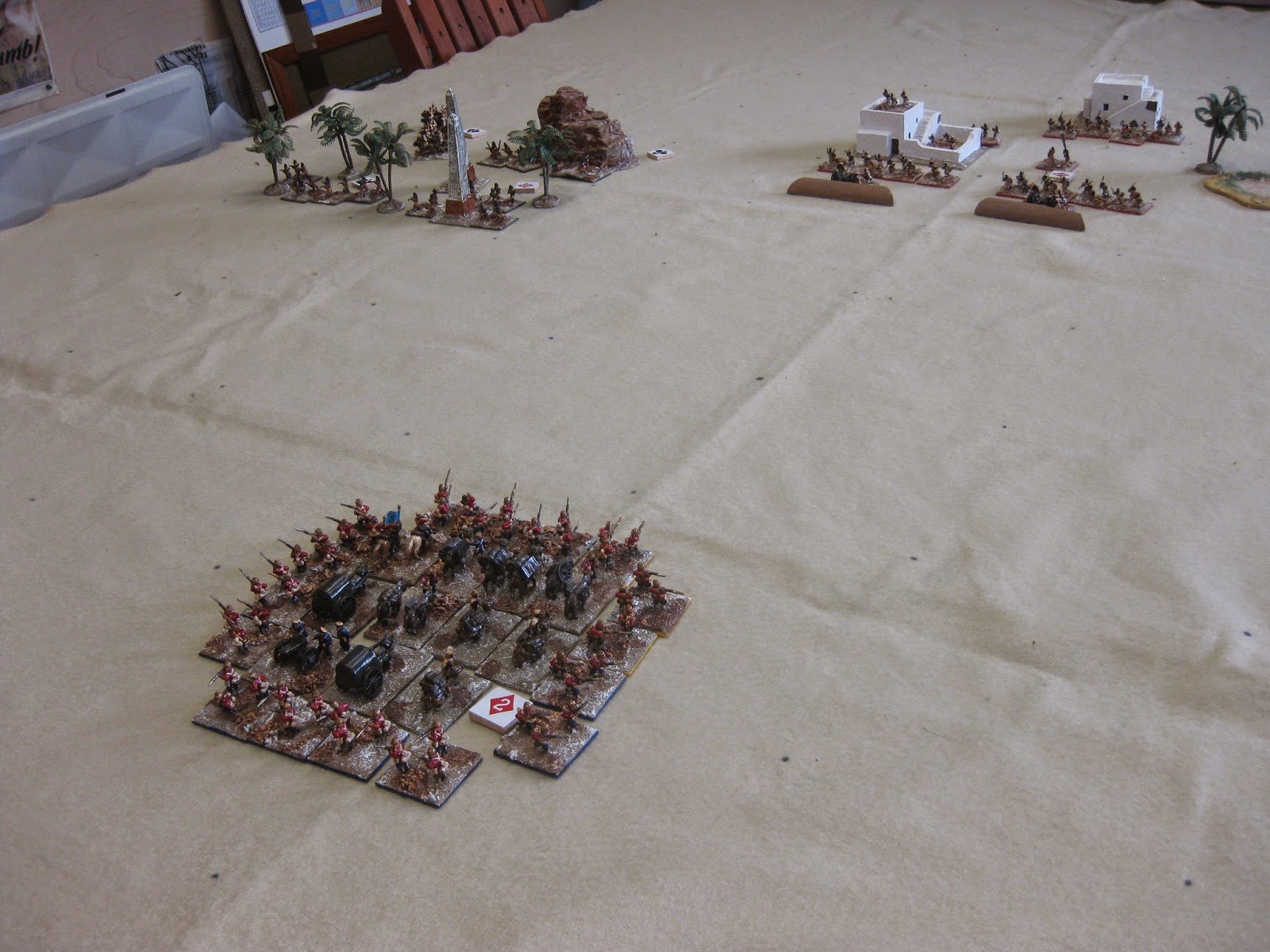 The British drew a low card in the first turn and formed up into a Brigade square. The very sophisticated plan was to march across the table, mowing down any approaching Dervishes should the opportunity arise. It's the sort of plan that made the Empire great. The square is full of baggage, camels, a battery of screw guns and a Gardner gun pulled by some jolly Jack Tars. The cunning Dervish is lurking in cover. 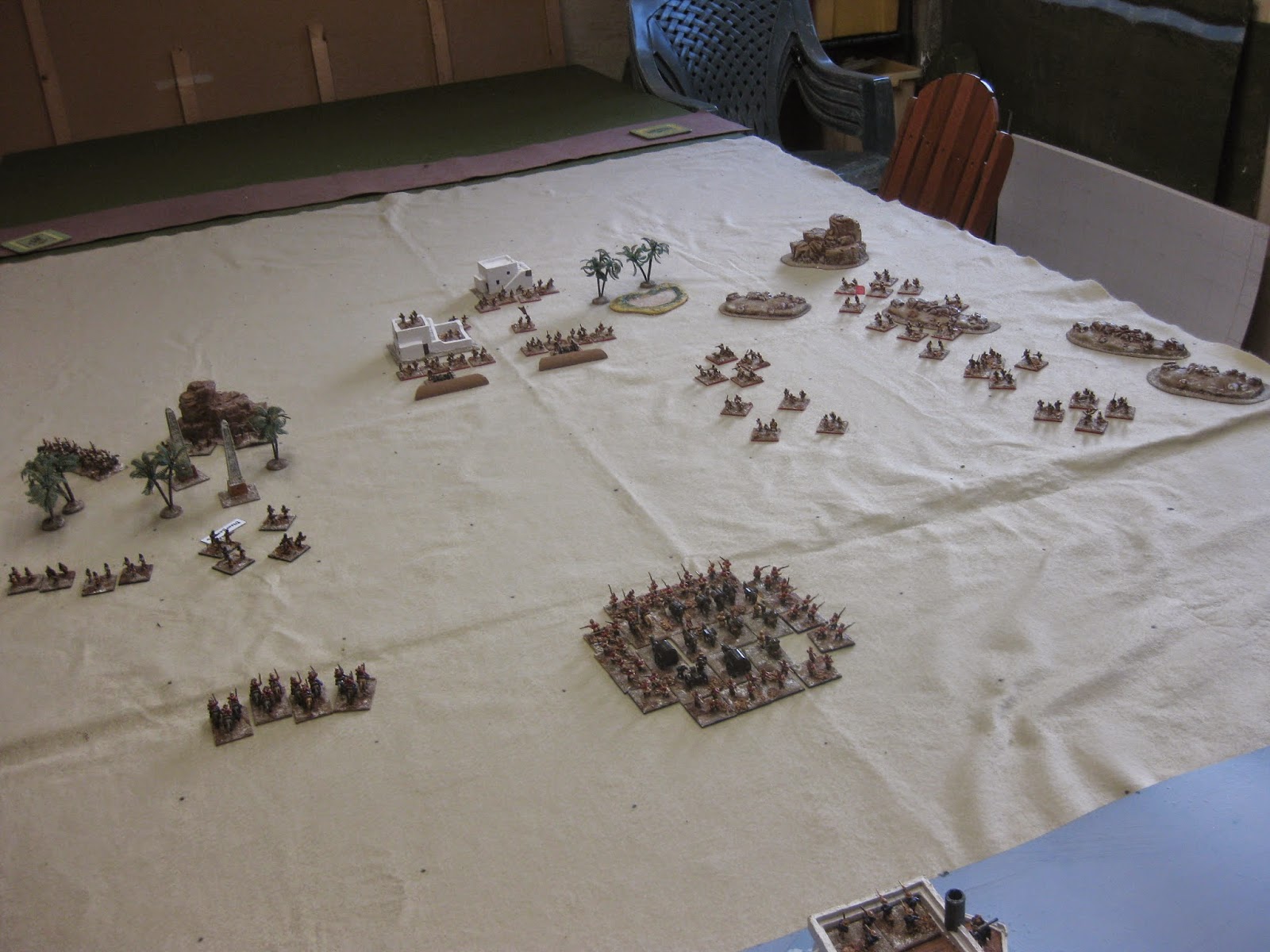 The British horse have moved out to the left to cover the square from that direction as Dervishes emerge from the palm trees. The Gunboat steamer currently thinks its work for the day is over. 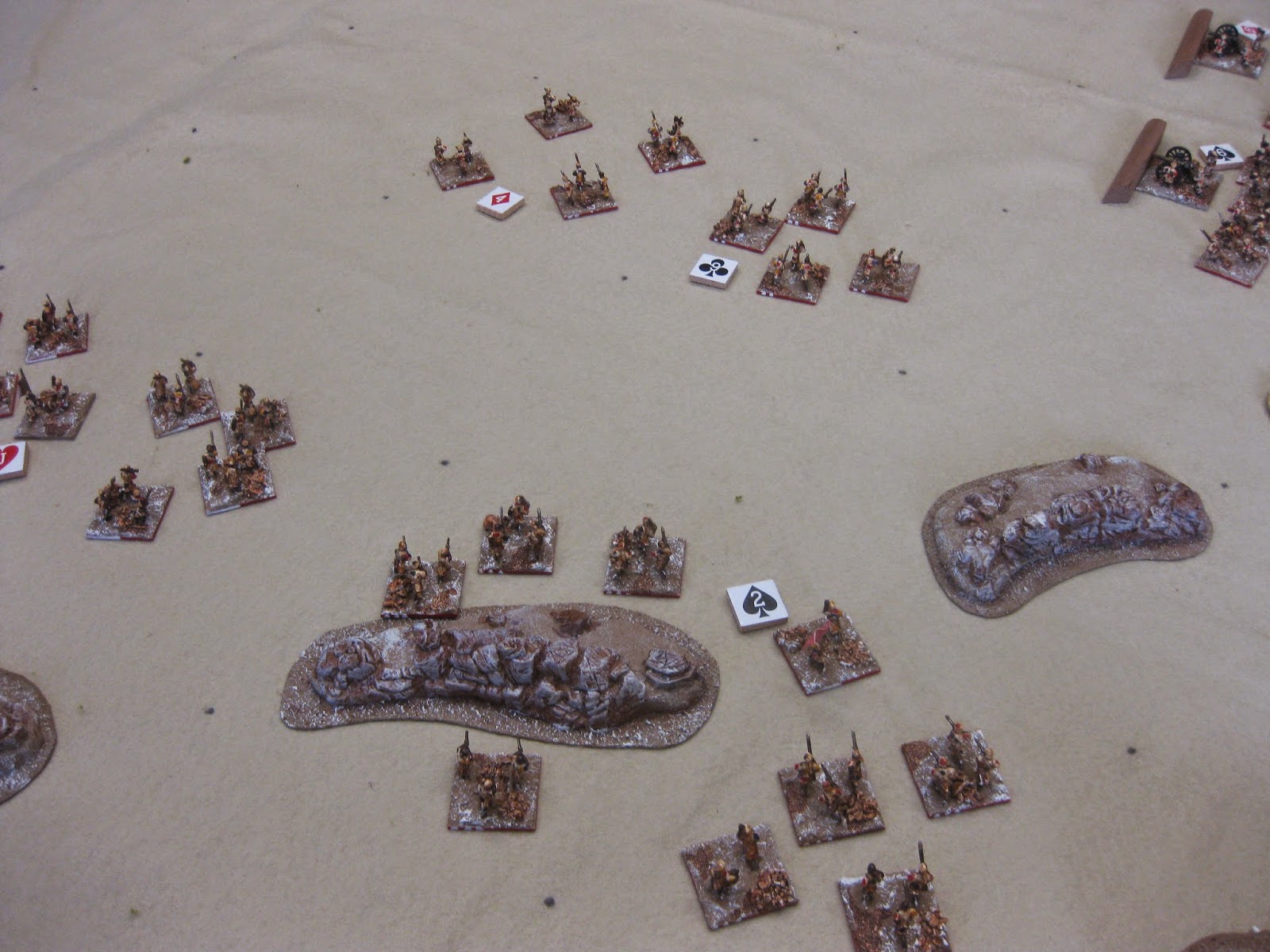 Unable to restrain themselves (plus I wanted to finish before 9pm to watch CSI on 5+24 as the DVR failed to record it on Tuesday) the Dervishes emerge from the gullies. 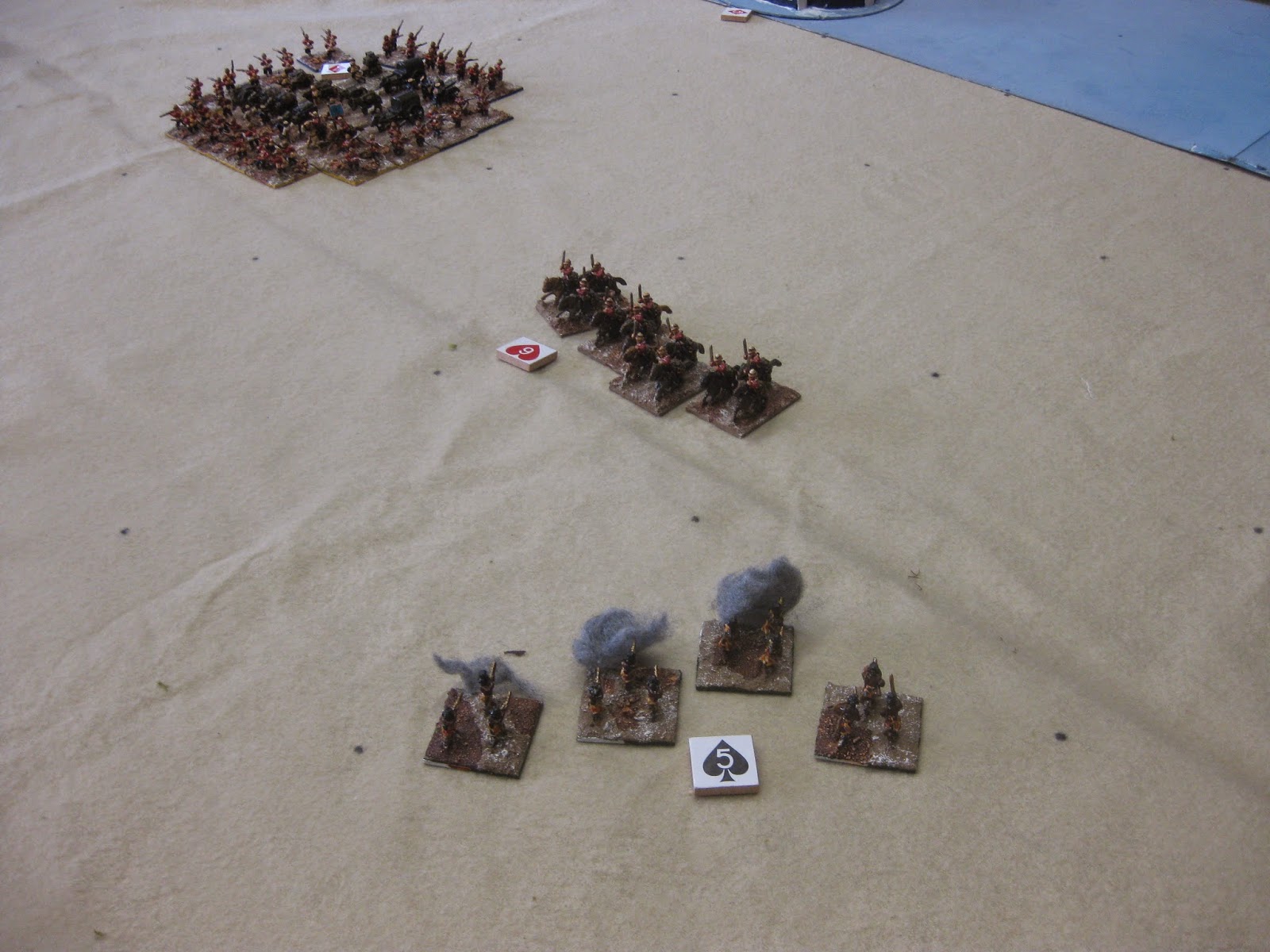 On the left the Dervish horse close and open up a desultory fire on their opposite numbers. 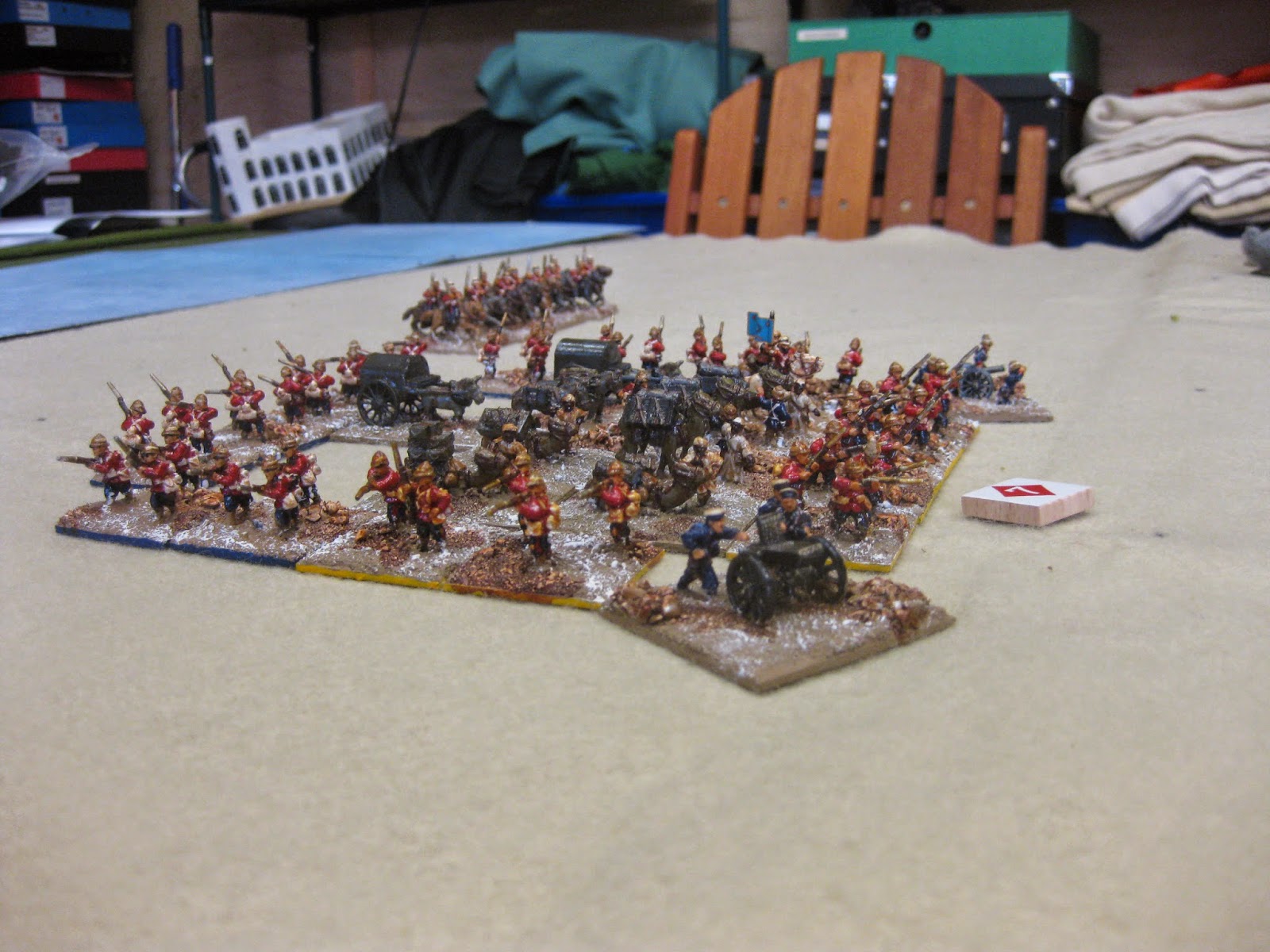 This is just a gratuitous eye-candy shot of the square with the MG deployed, because it looks great from this angle.

Hordes of Dervishes start to swarm across the plain. The square halts and deploys its heavy guns. The Jolly Kaftan moves up to provide covering fire. 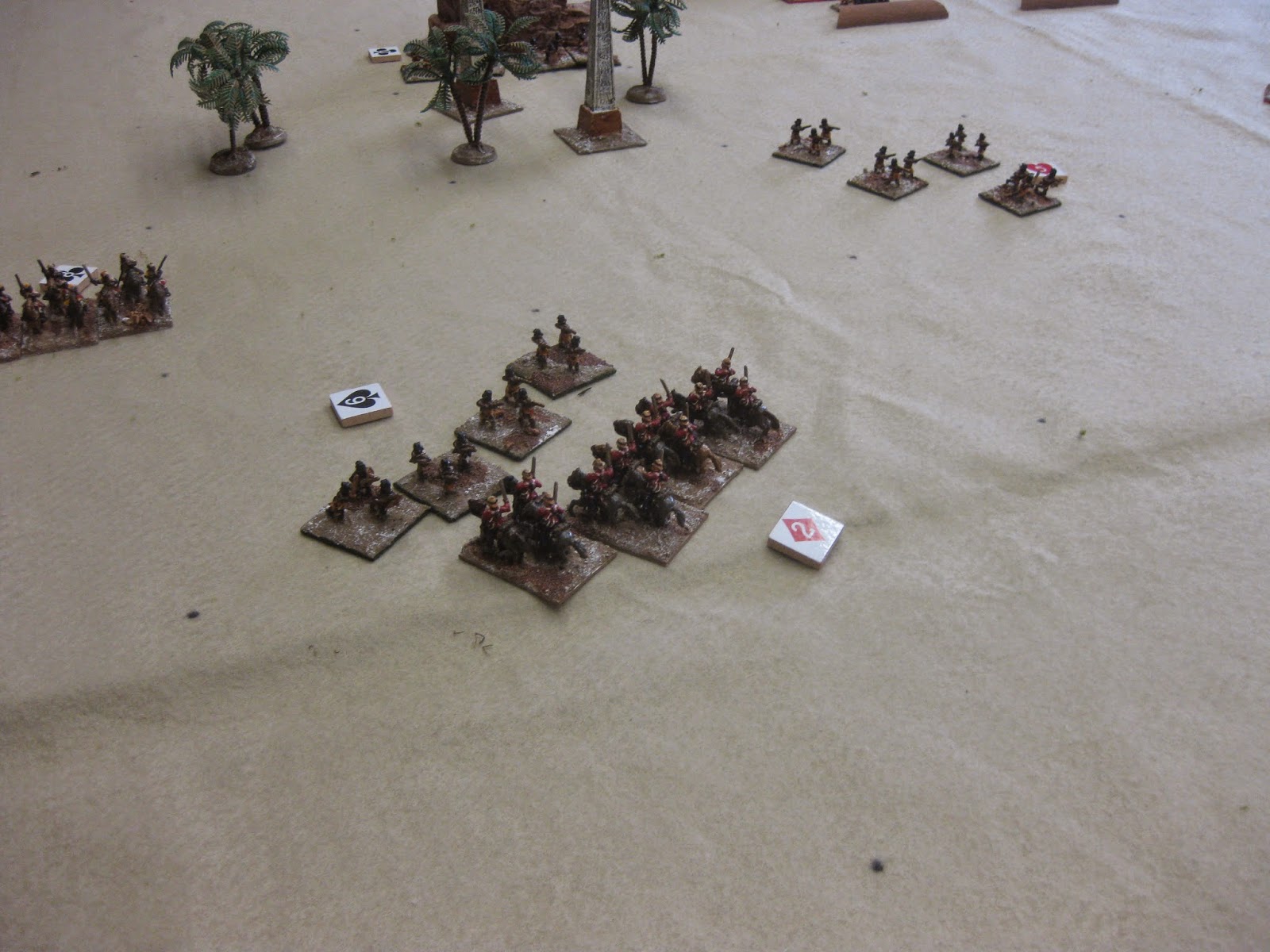 Being typically gung-ho the British cavalry launch a charge at some Dervish foot. This doesn't end well. 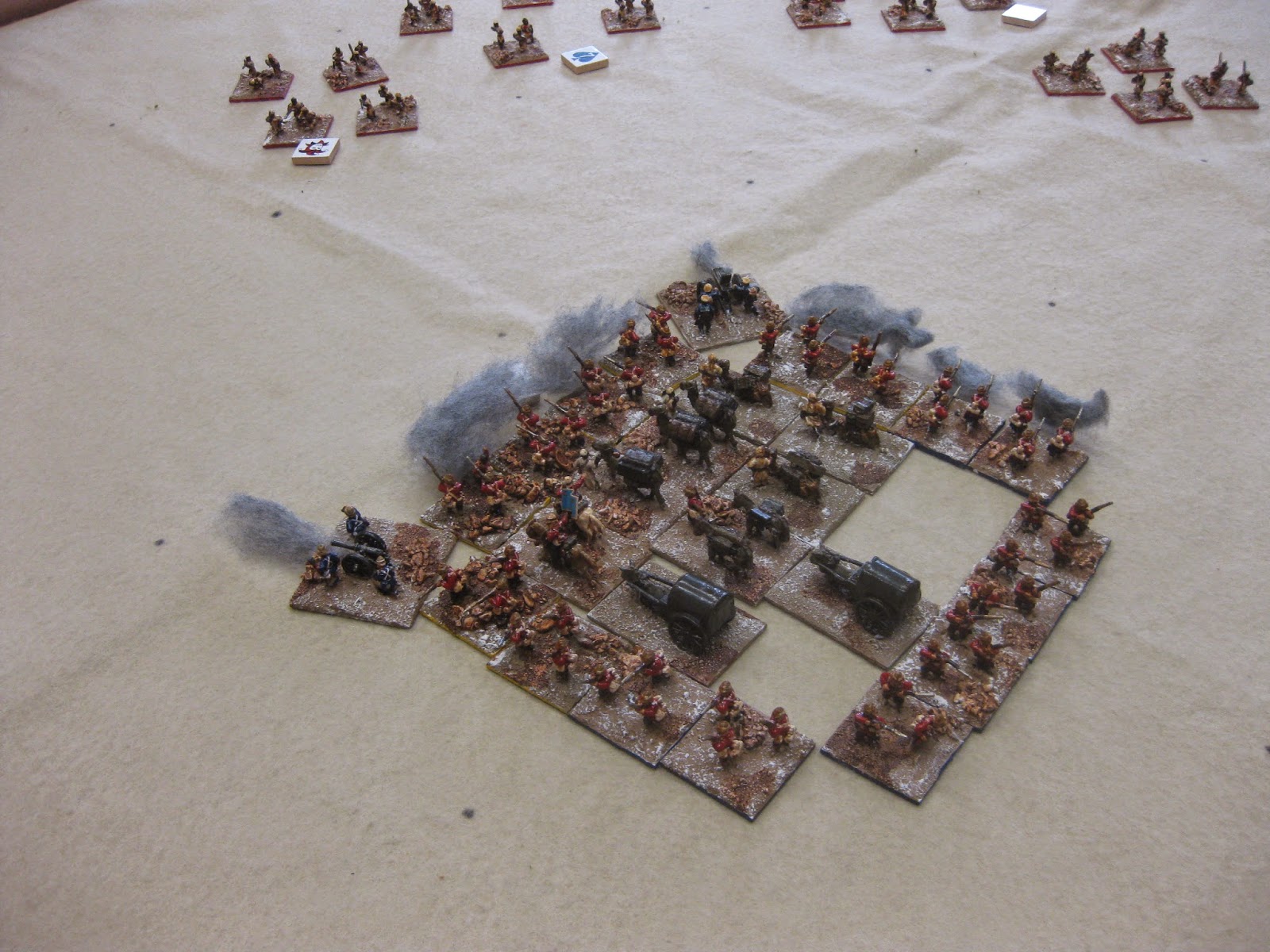 The Square finally opens fire. The effects are less than stunning. (Rolled four d6 looking for 4 or less. Got four 5s). 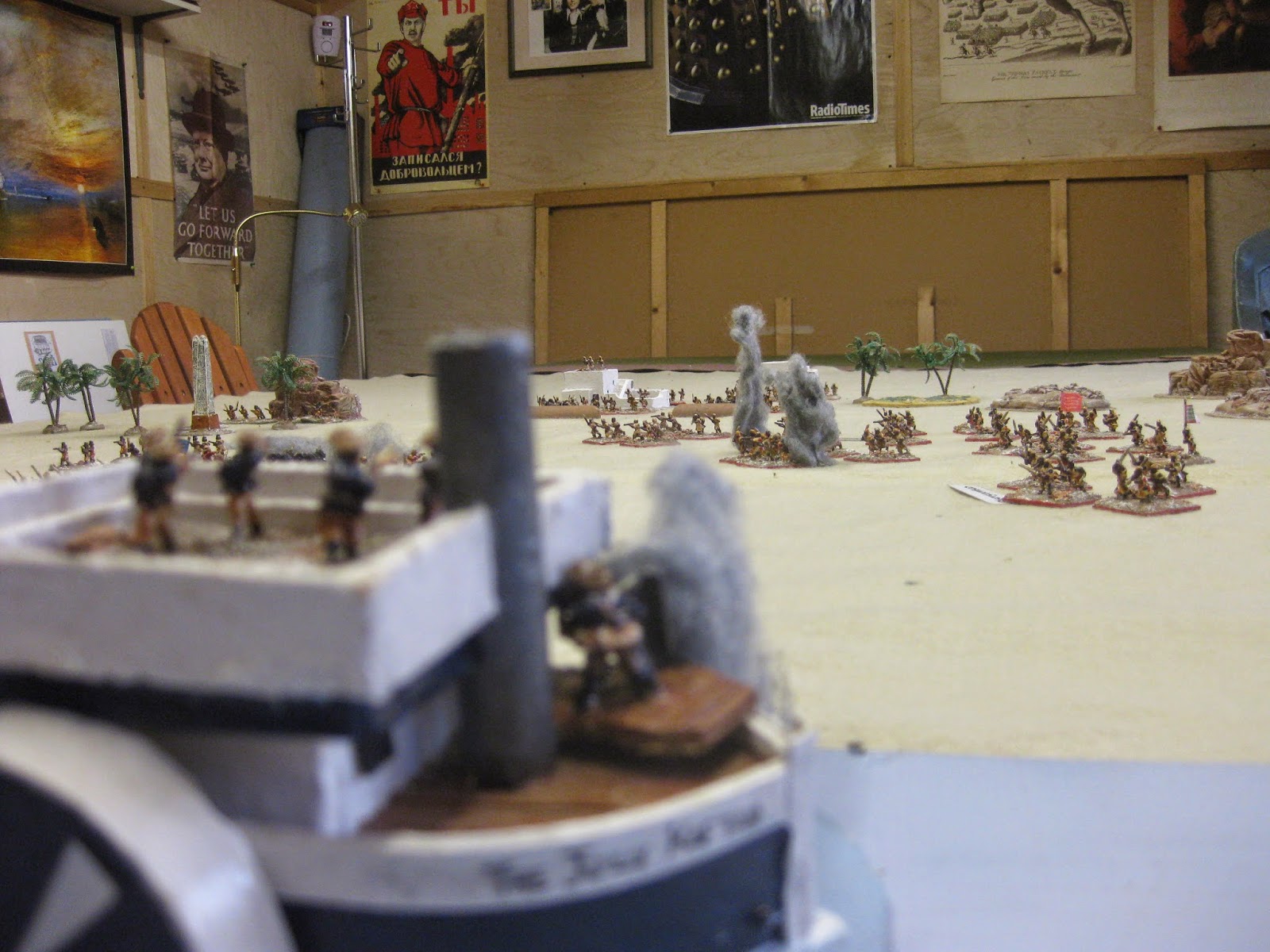 Luckily the fore mounted gun on the Jolly Kaftan has the range and opens up to devastating effect. 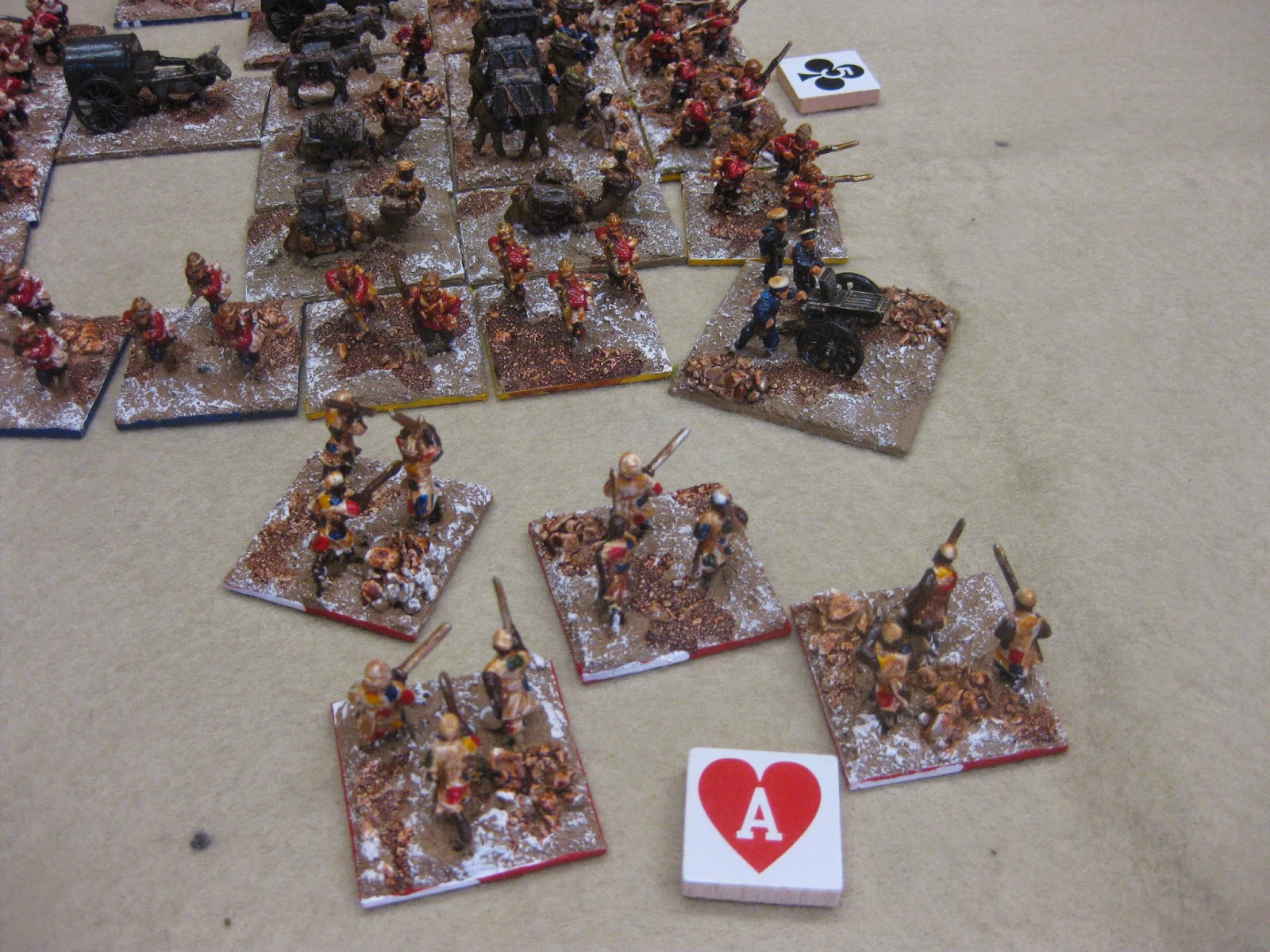 Despite the Jolly Kaftan's fire one Rub gets through. And it's going to move first this turn before the square can fire. Alas for the Mahdi it is beaten off with cold steel. 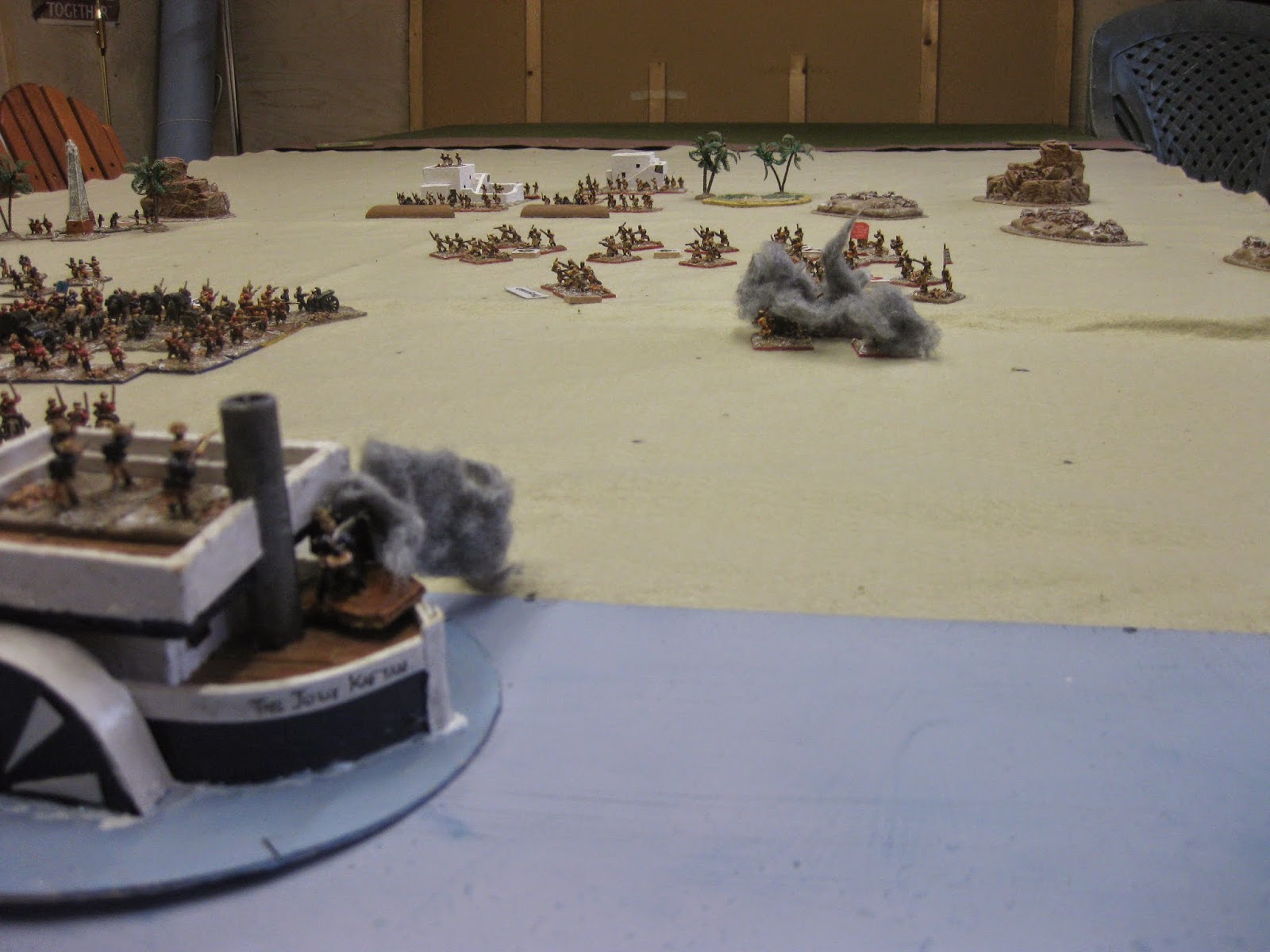 Right into the path of the Jolly Kaftan's gun. 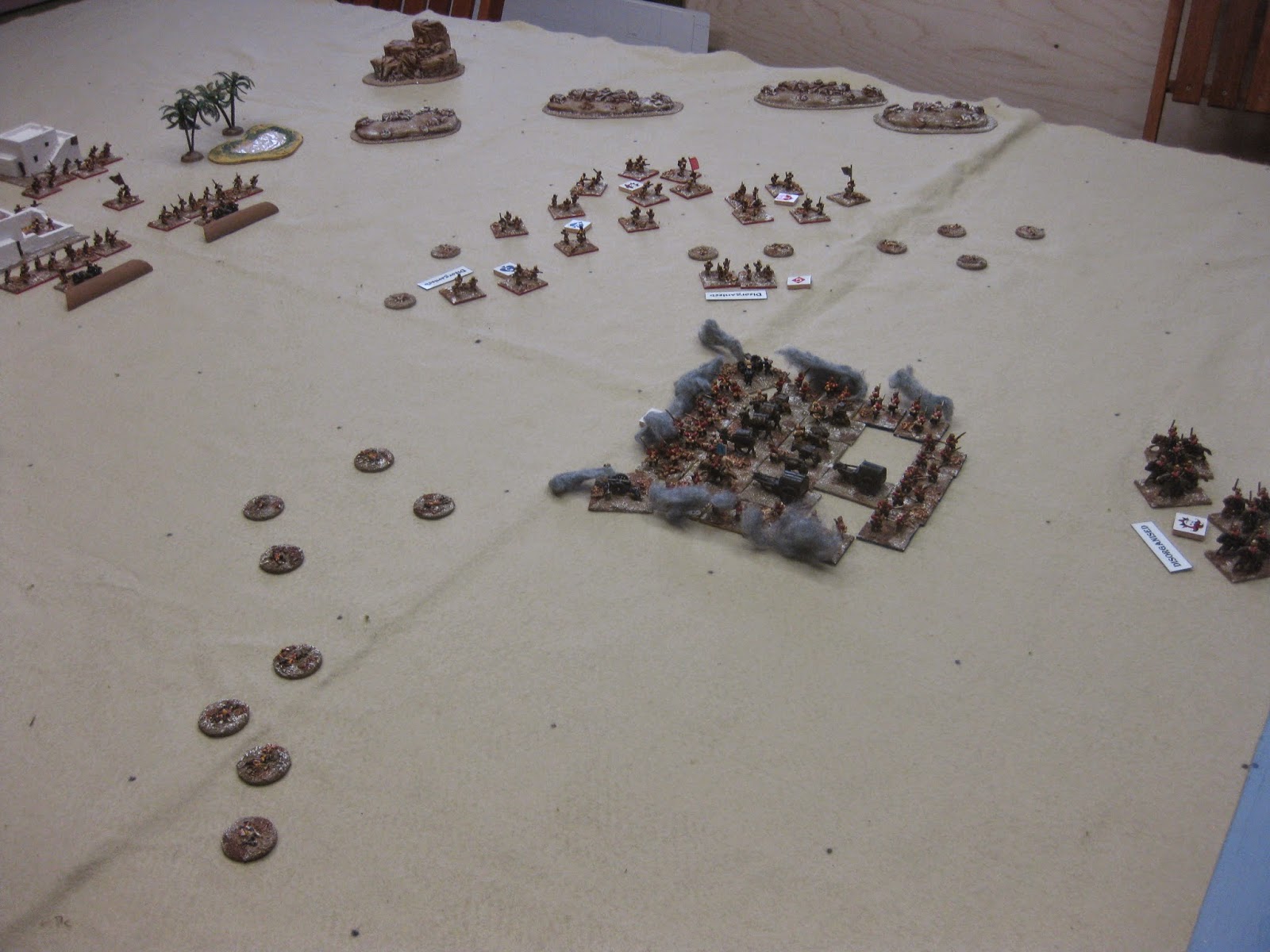 The square then opens up again and this time the men in the Redcoats do their business. The Mahdists are driven off with heavy casualties (NB You can see the cavalry skulking behind the square next to the river on the right. They're disorganised, and will continue to be so for most of the game.) 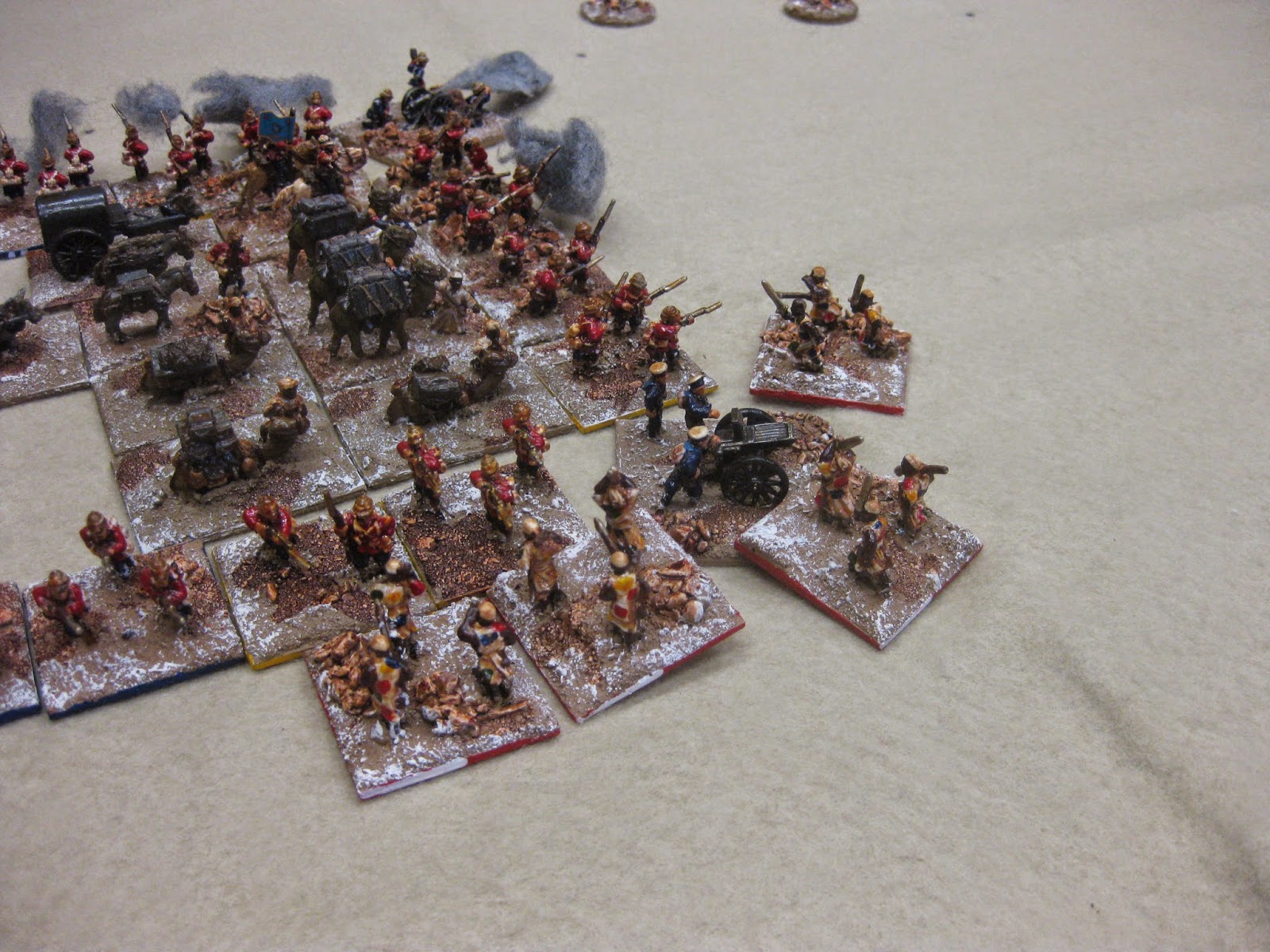 Despite the volume of fire another Dervish Rub contacts the corner of the square..... 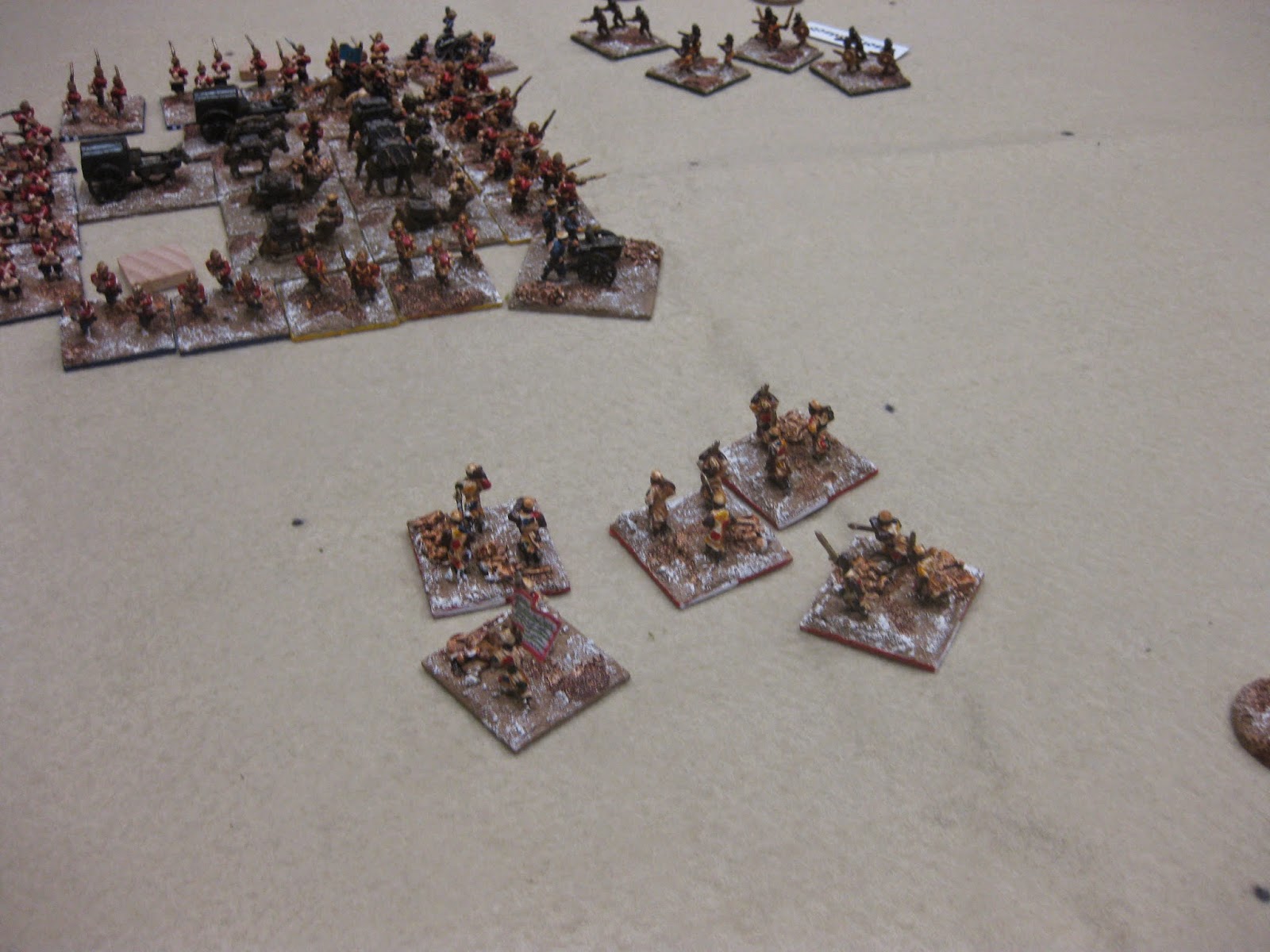 ...only to be driven off again. This is looking too easy for the British. 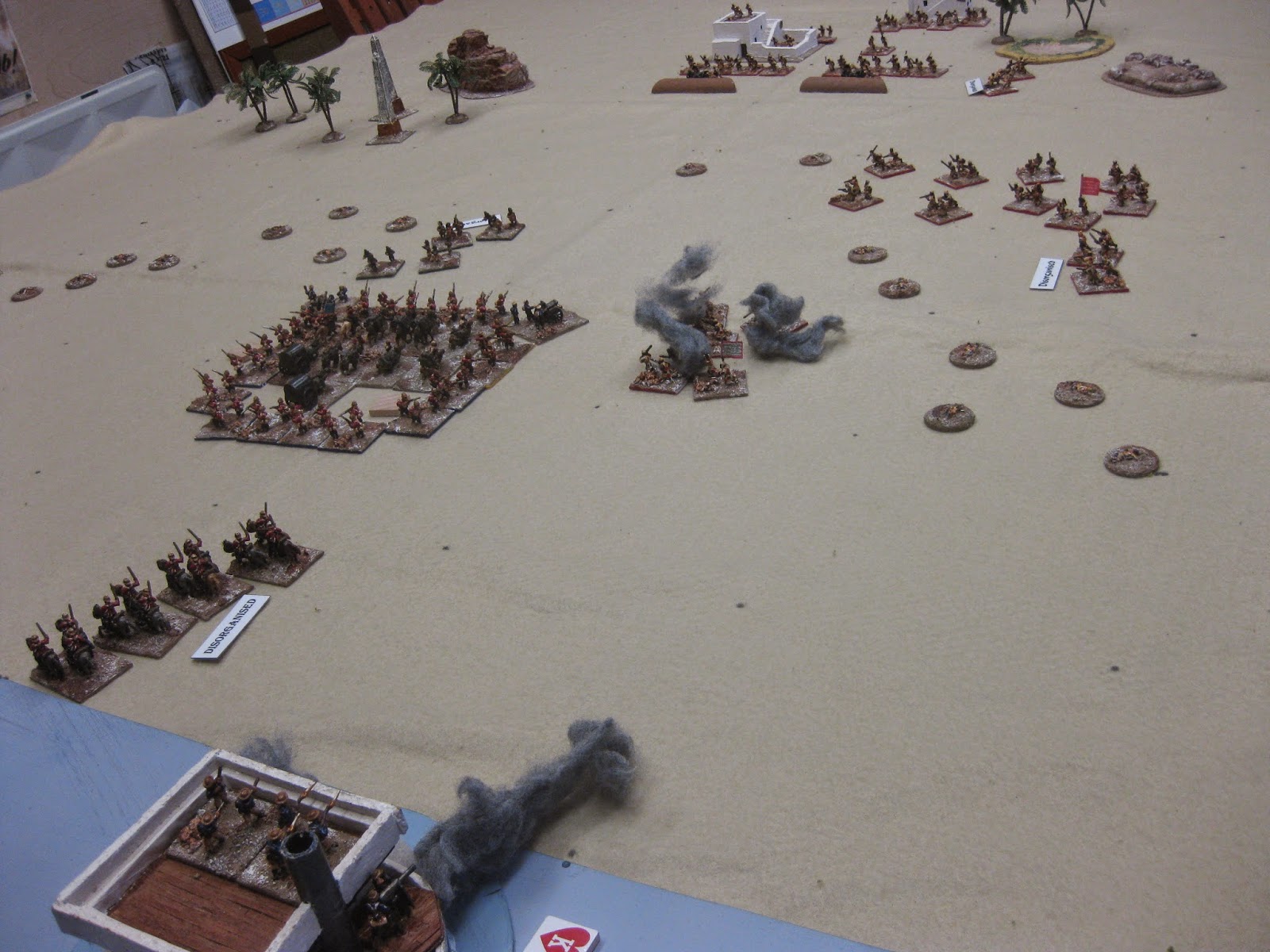 Especially as the gunboat keeps delivering on the fire support front. 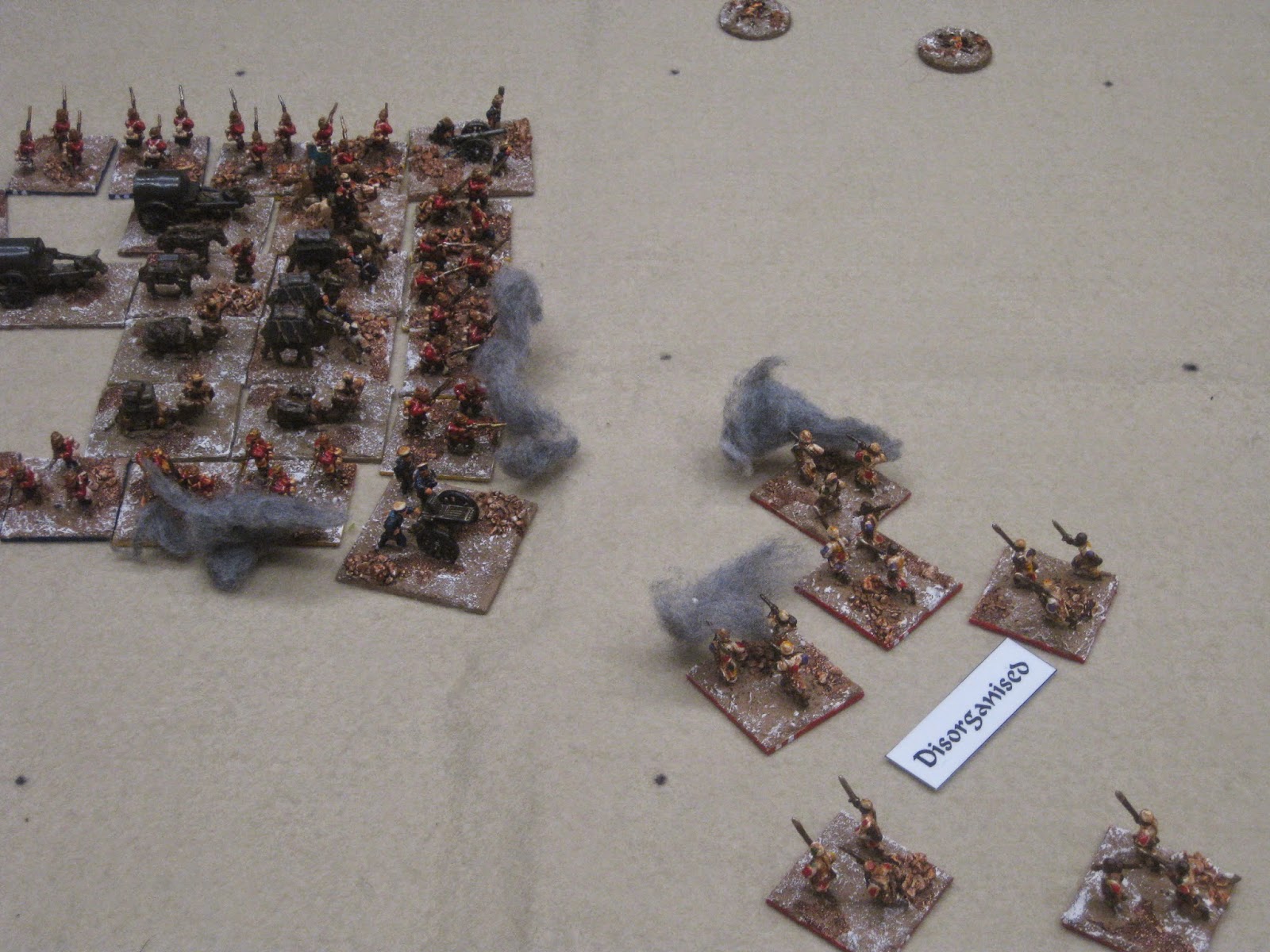 The square exchanges fire with some dervishes who just won't go away... 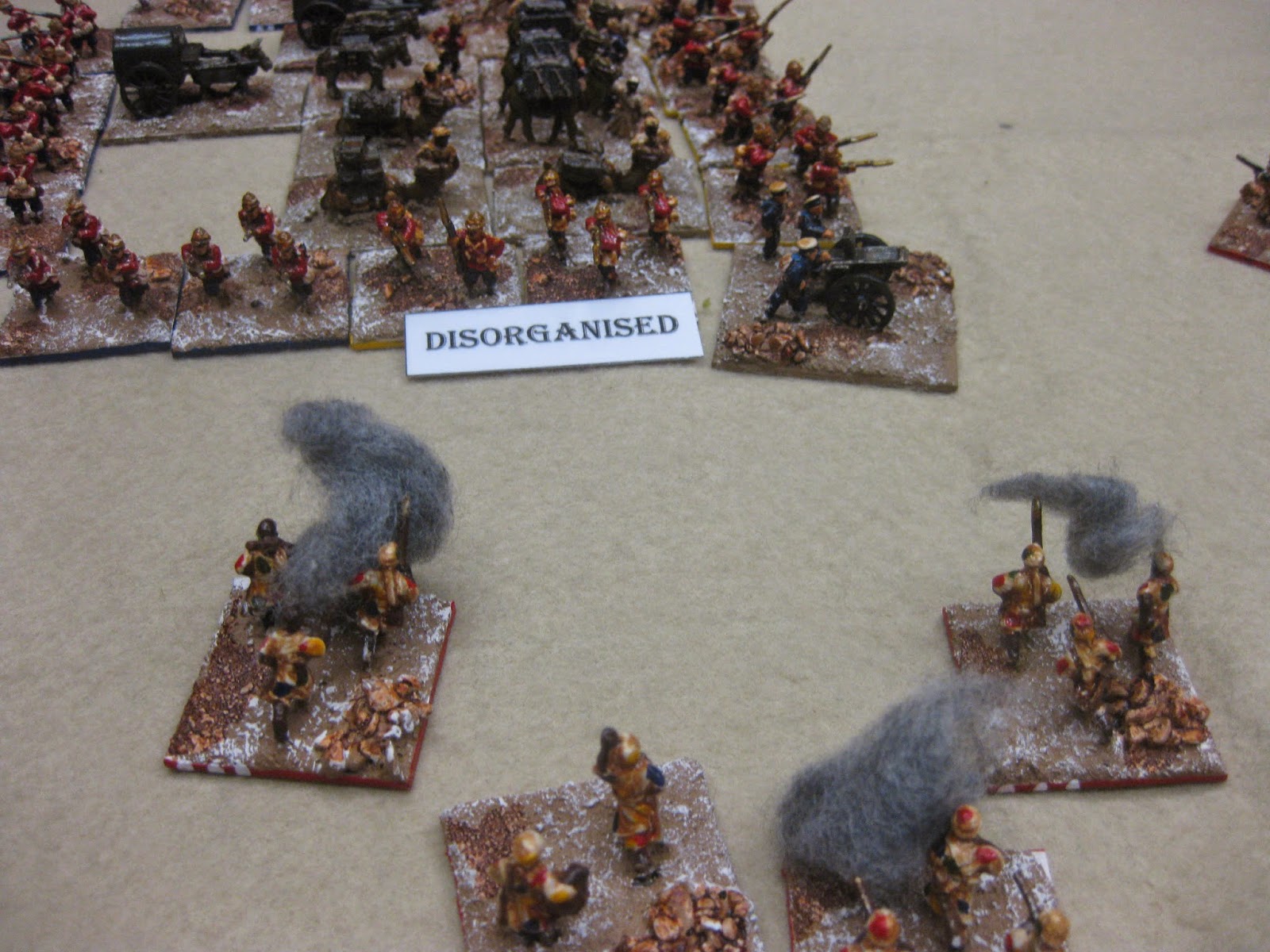 ...who, together with some other colleagues succeed in Disorganising the corner of the square. 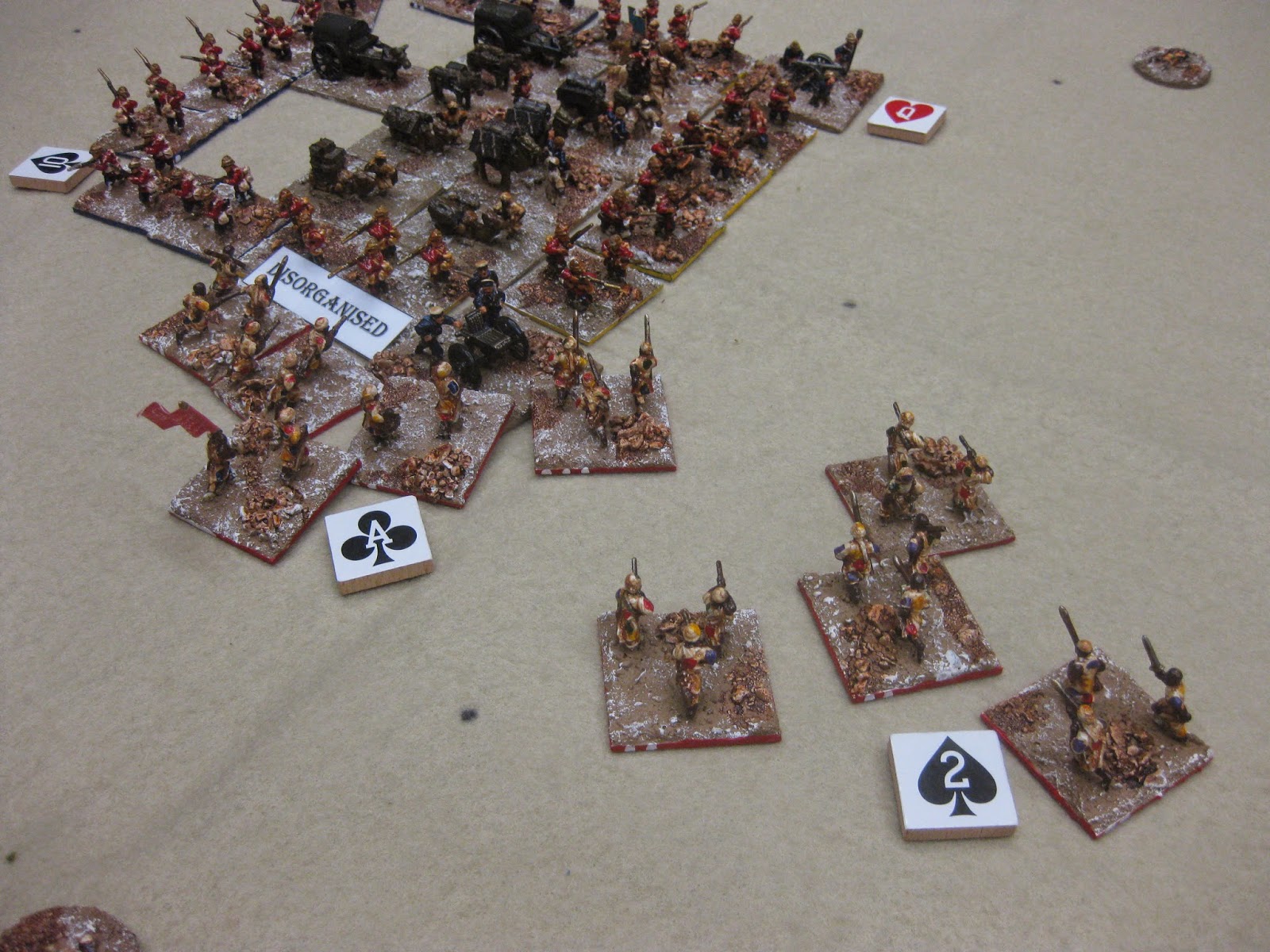 Another Ace, and the Mahdists are in, screaming their battle cry..... 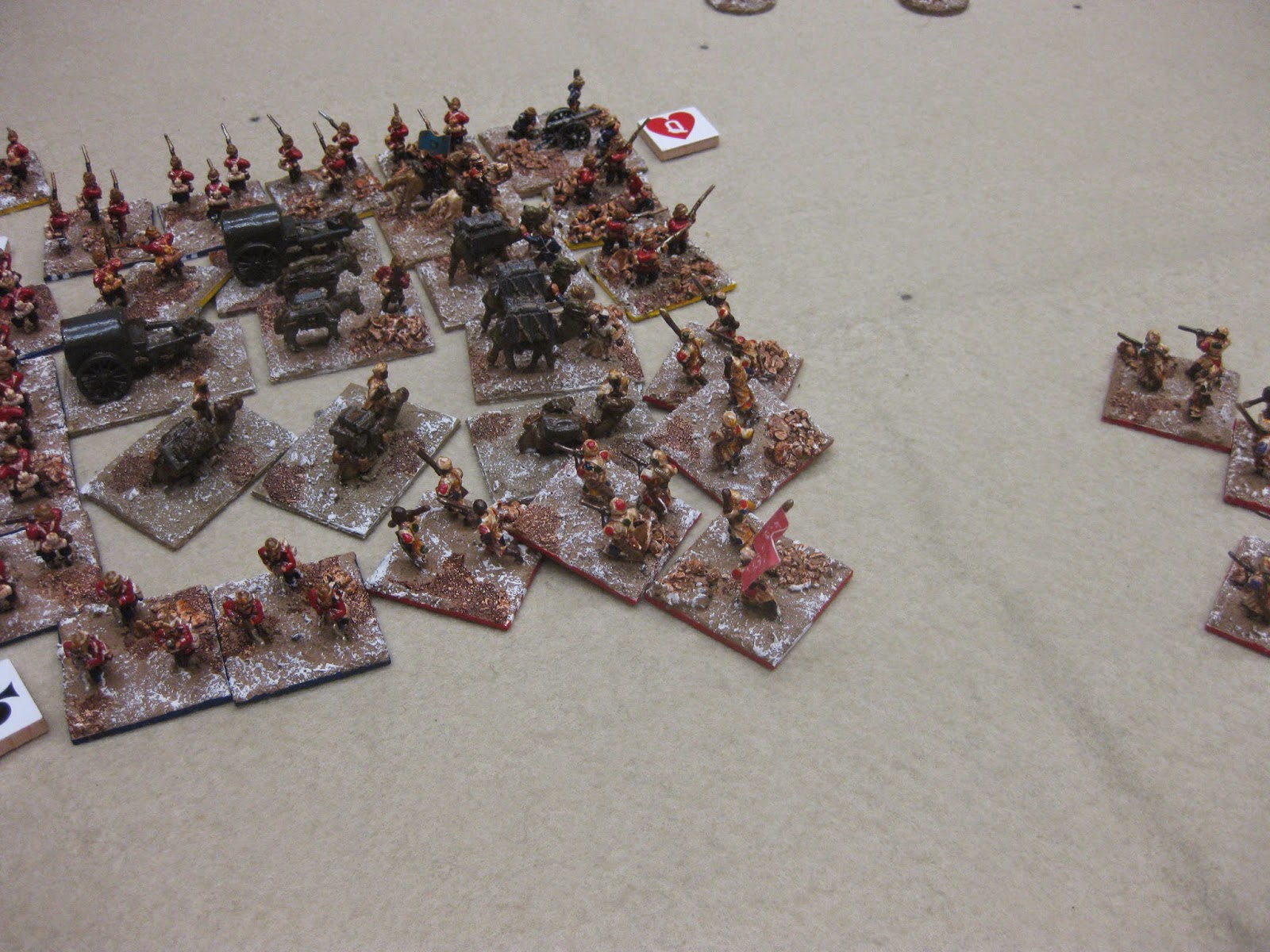 ...and the Regiment breaks. The Mahdists overrun the Gardner, leaving several lads lying on the sand who are never going to sea again. They also start slaughtering the camels. 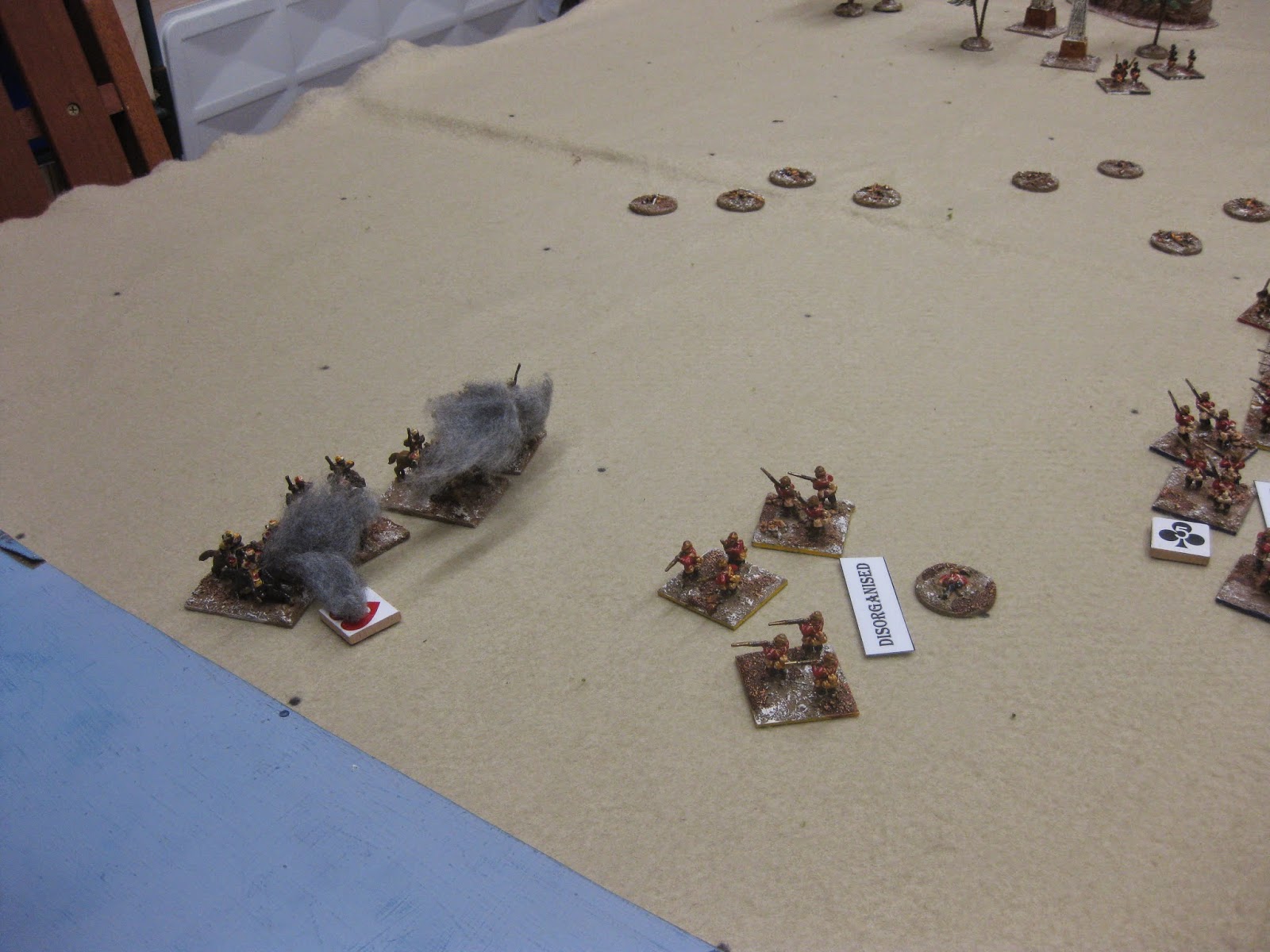 The routing infantry emerge from the back of the square into some fire from the Dervish horse. Could it all be going south for the Soldiers of the Queen? 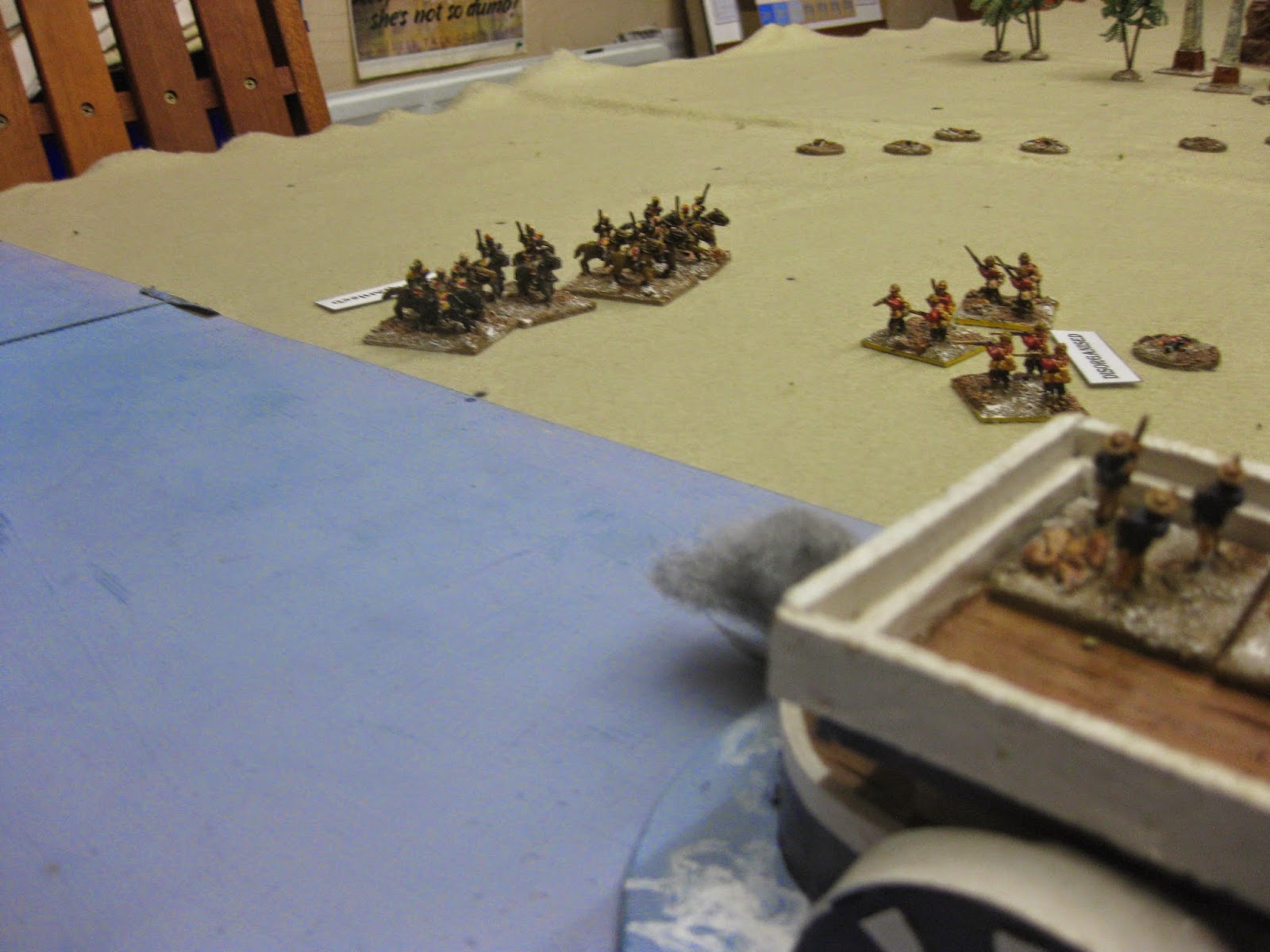 The Jolly Kaftan sails to the rescue and opens up on the Dervish cavalry with the rear Gardner gun. 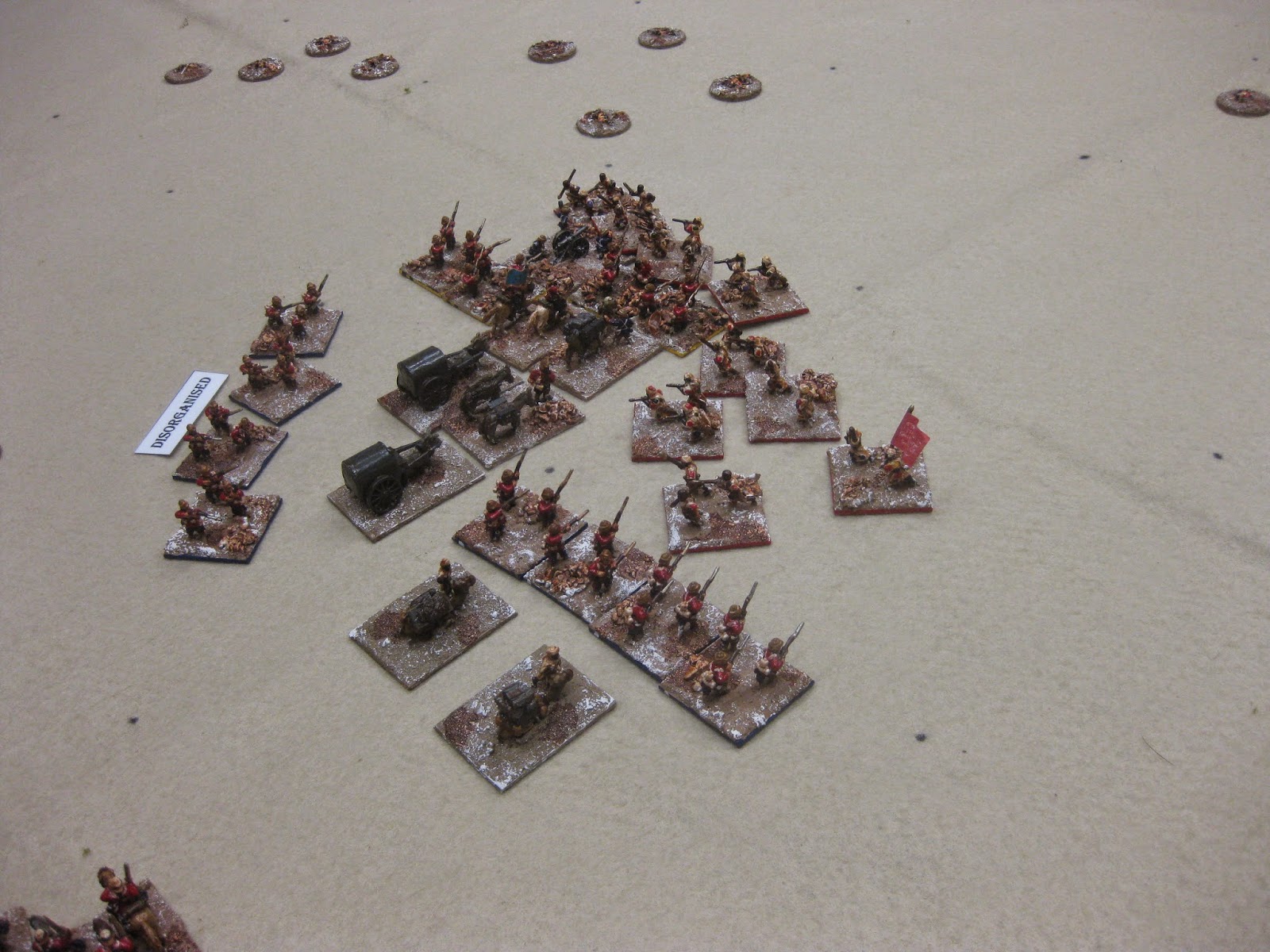 The rear of the square about faces and prepares to volley into the centre (now, where have I heard that before?). 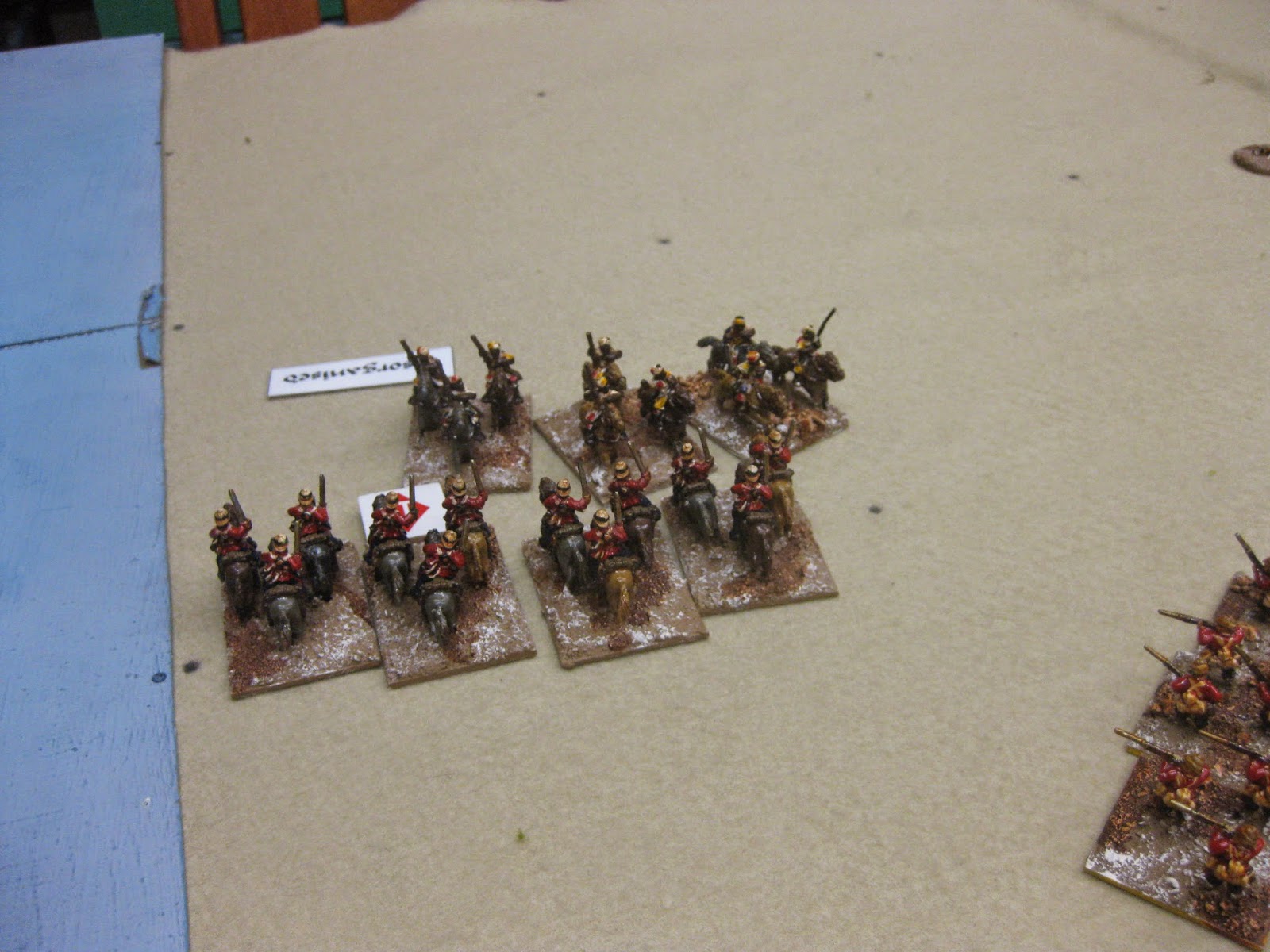 The British Cavalry finally get themselves sorted out and produce a charge on the Dervish cavalry to enable the routing troops to reform. 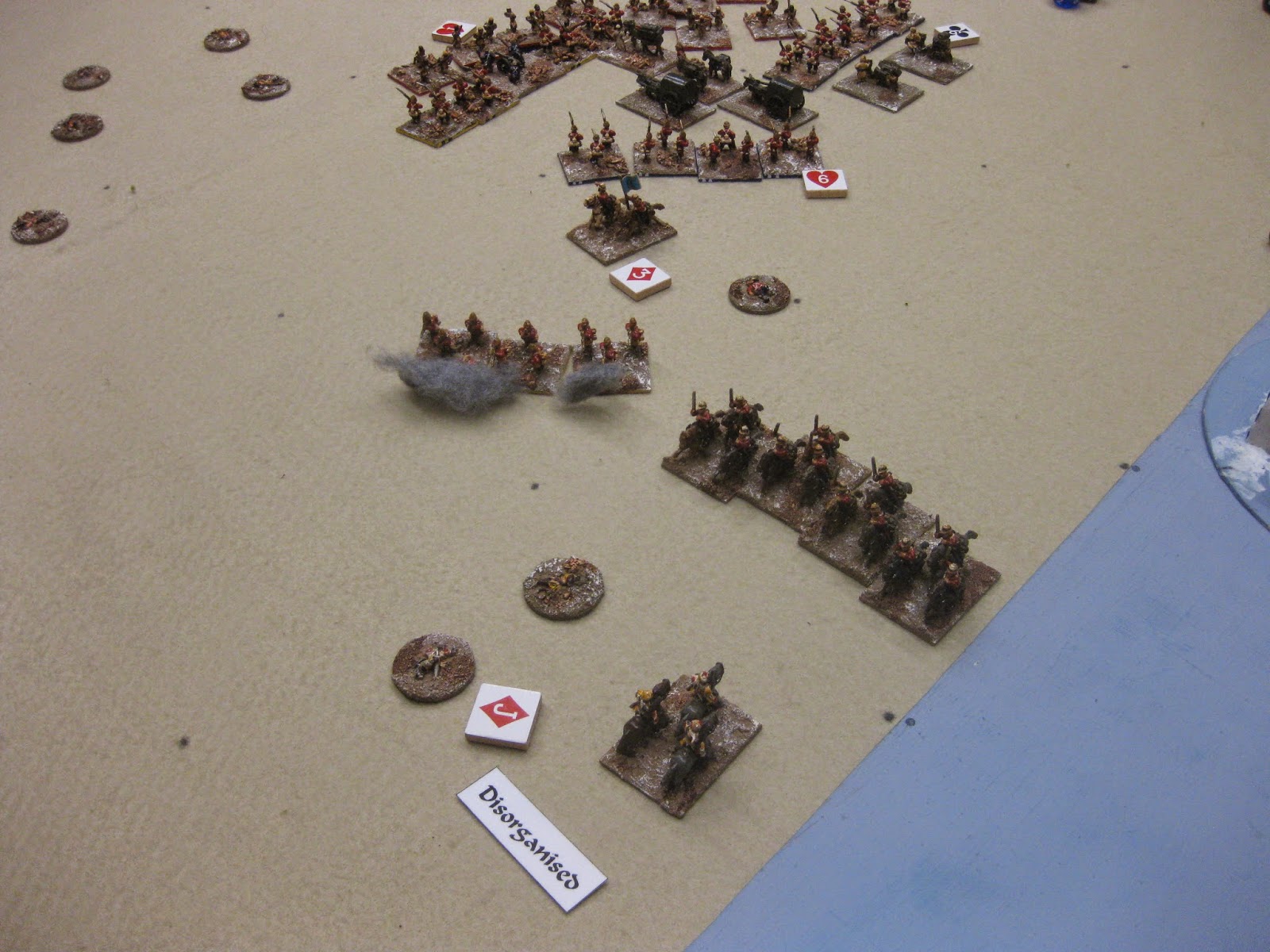 With the Brigadier present the infantry reform and give the Dervishes a volley or two. 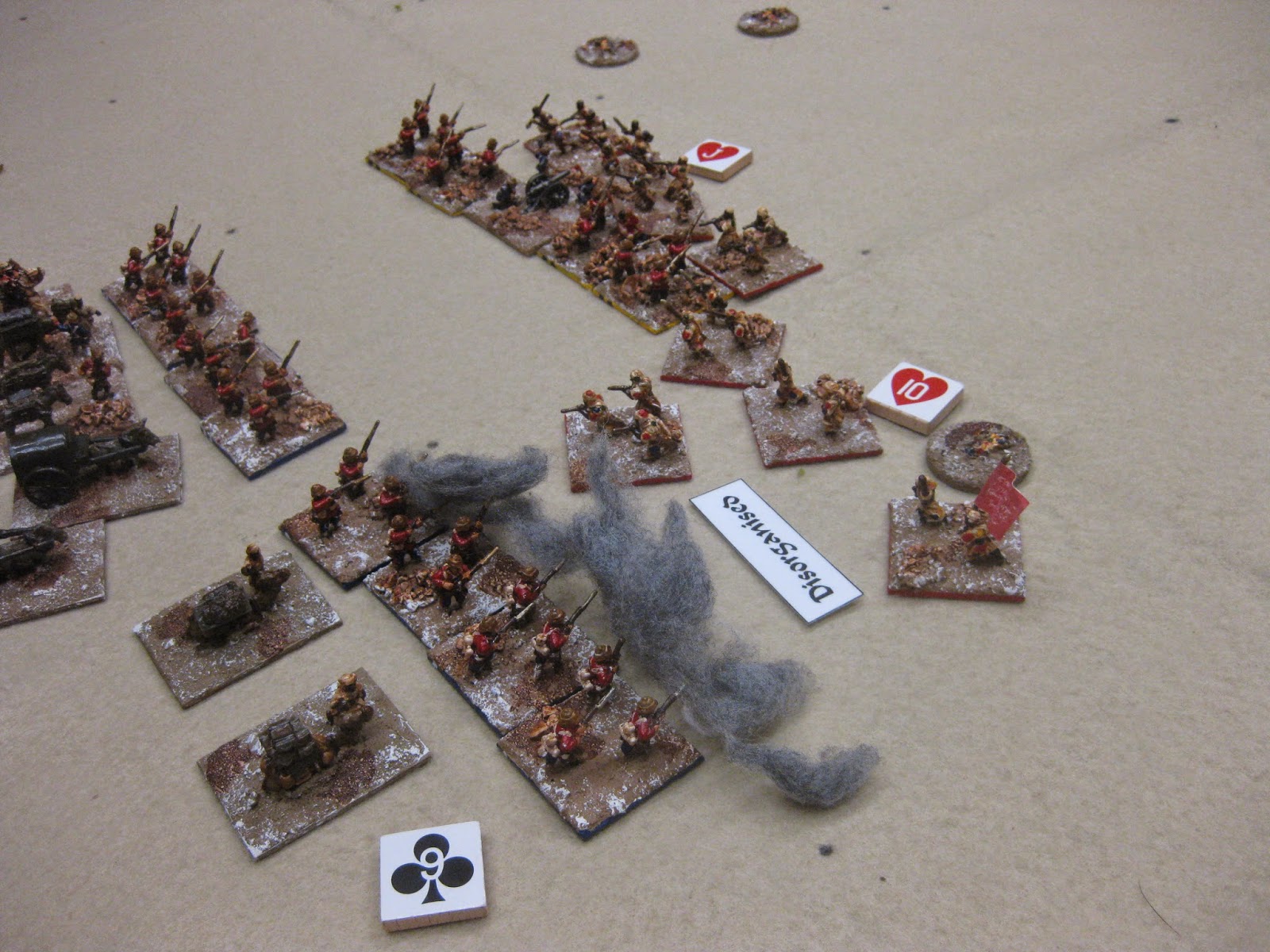 The rear of the square opens fire and halts the Dervishes in their tracks. Up at the top of the picture the other face of the square is crossing bayonet and sword with some howling Dervishes. It all looks nip and tuck again. 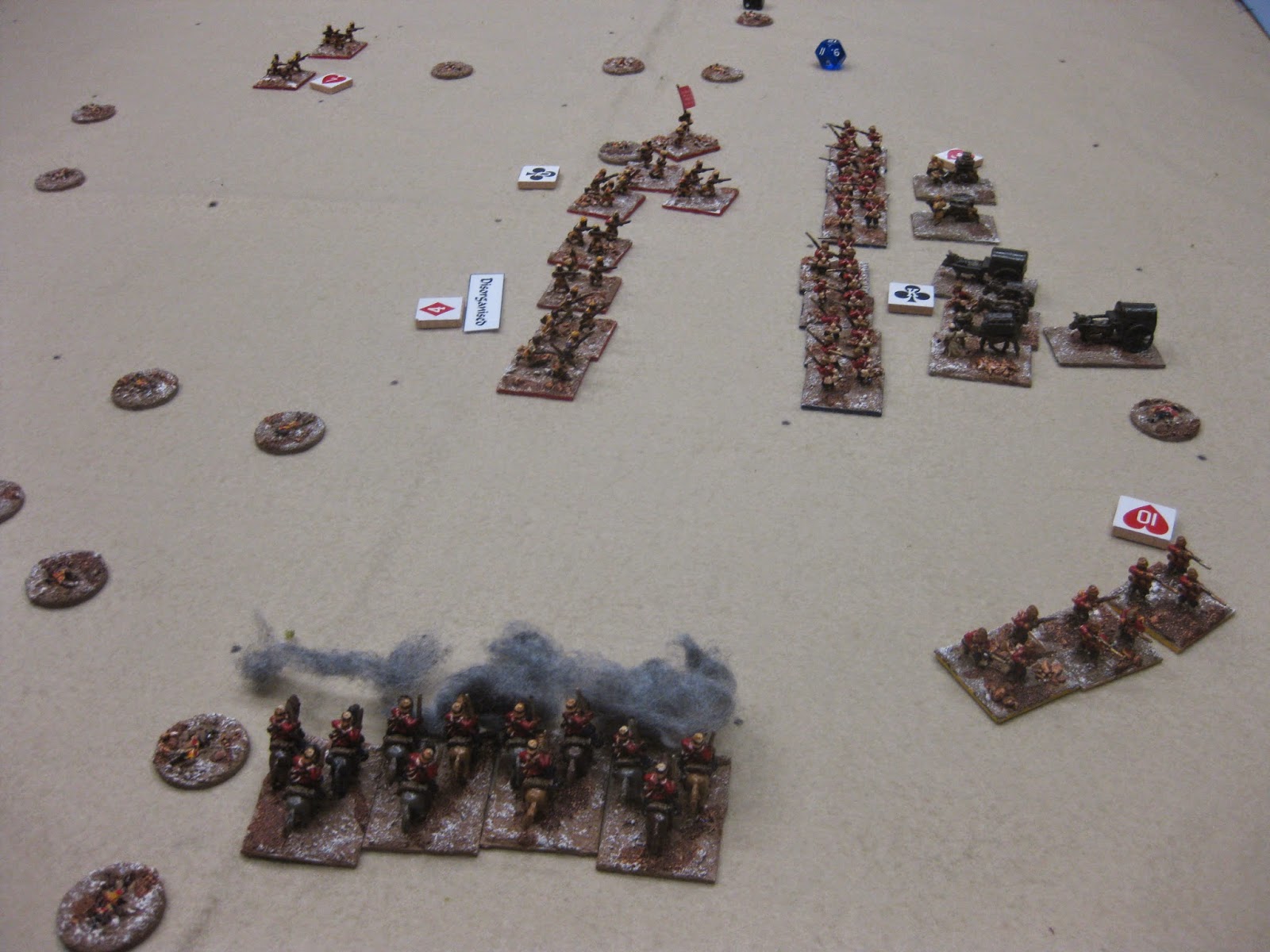 But help is on its way. The cavalry drive off their opponents and get round to the Dervish flank. They let off a volley of carbine fire. 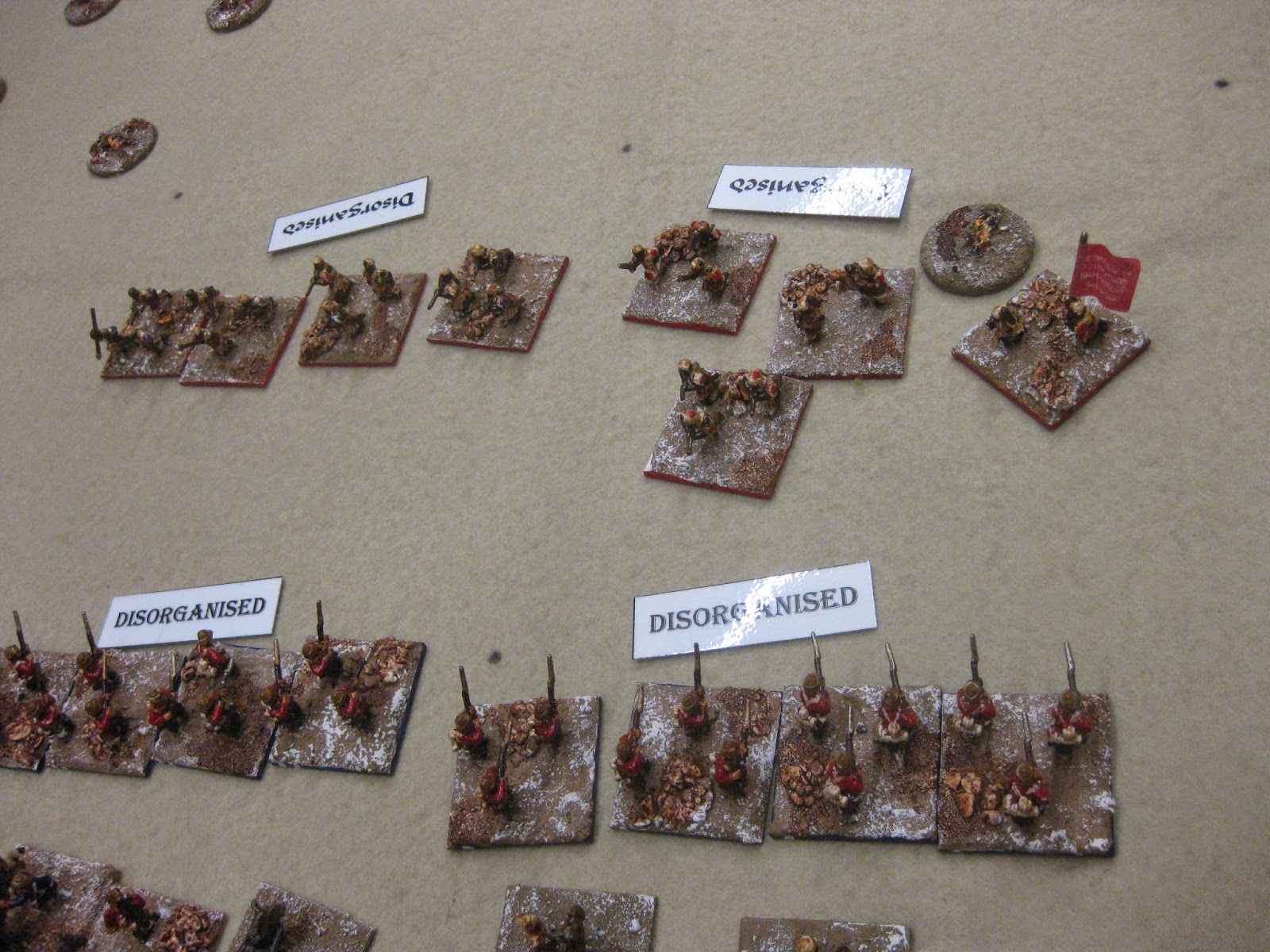 After a round of combat in the remains of the square everyone is disorganised, but no one is broken. 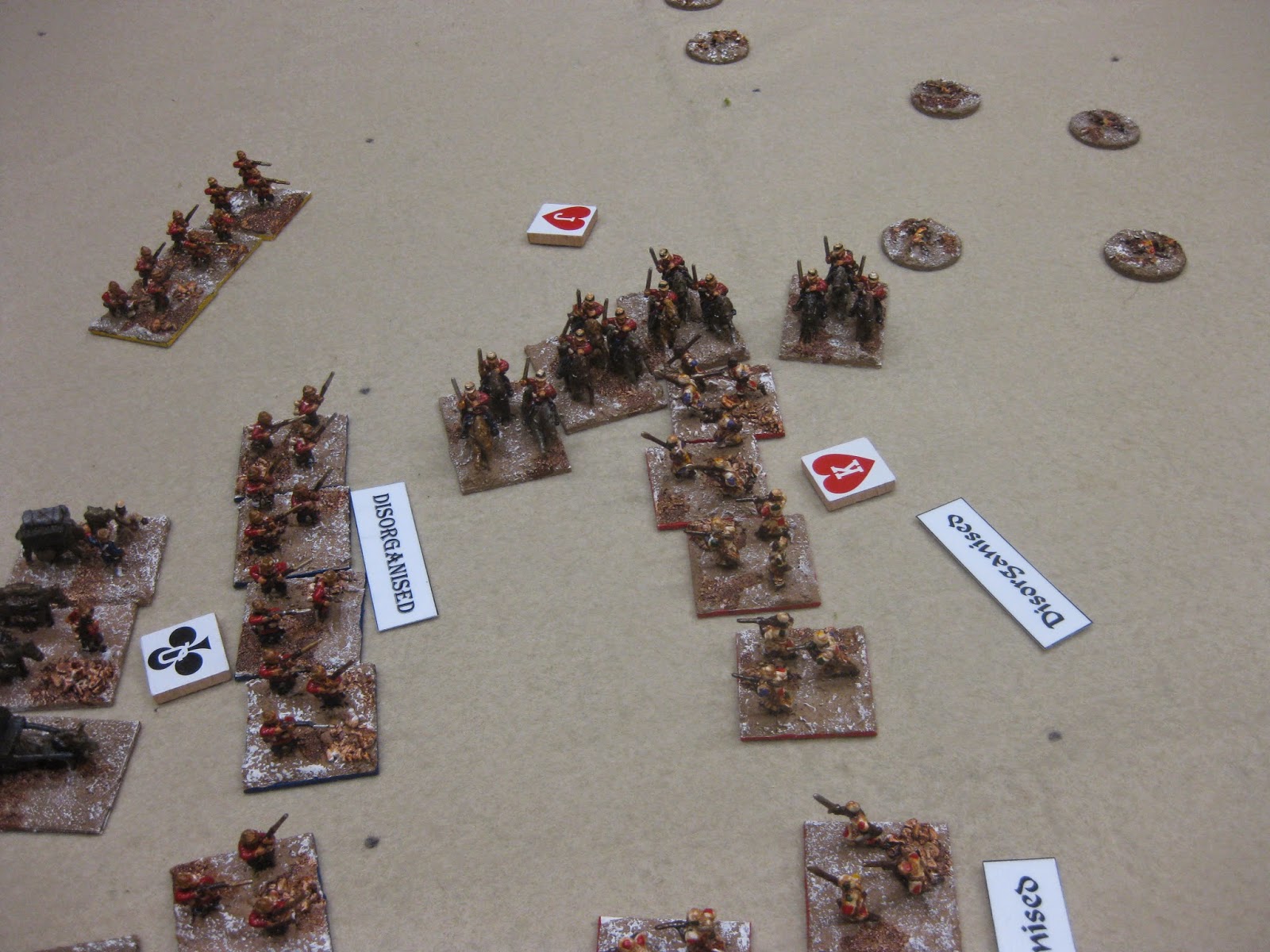 No matter, as the cavalry deliver a final charge into the flank of the Dervishes.... 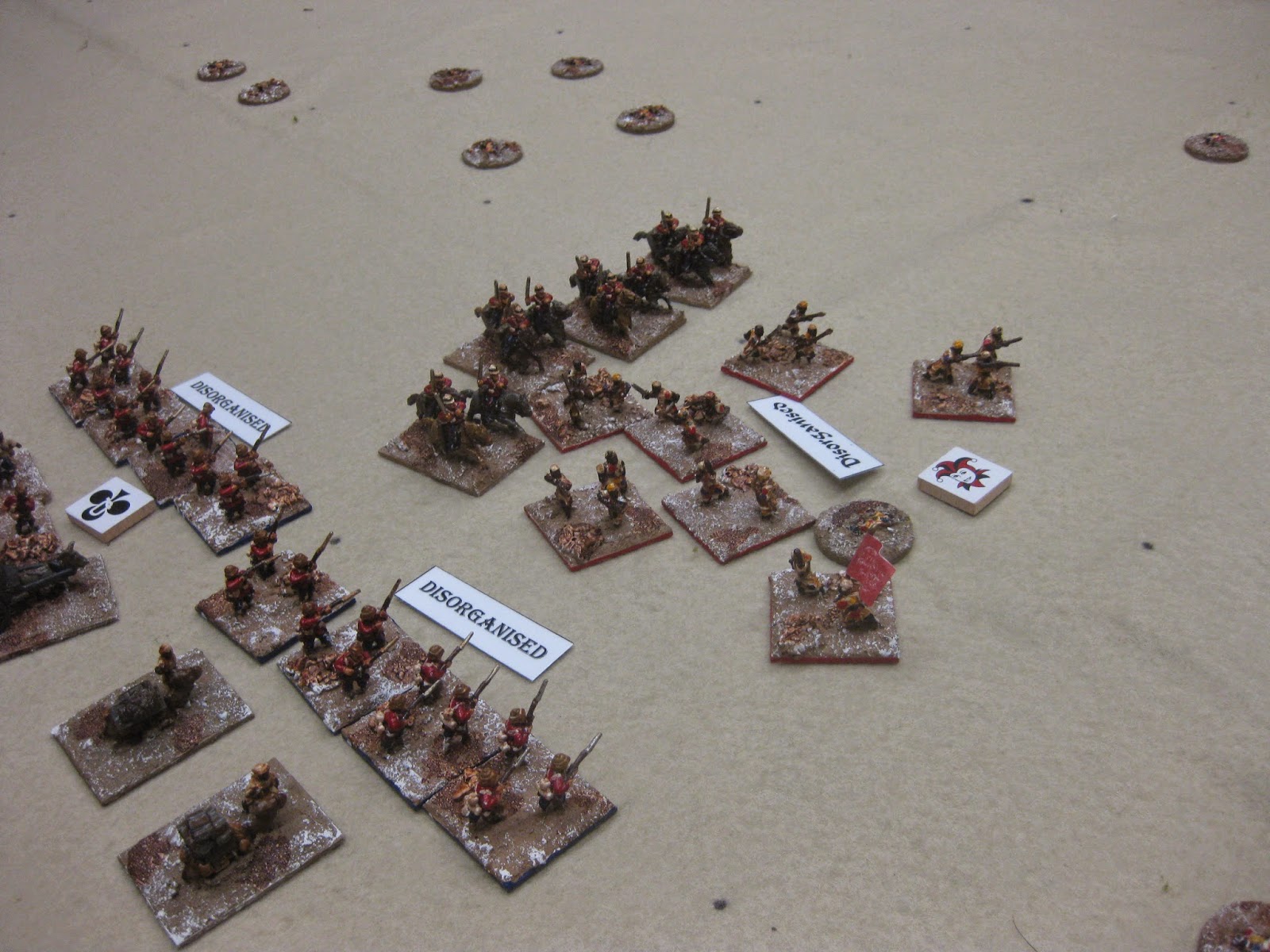 ....routing them into their colleagues. Game over.

Actually, about a third of the Dervishes are left holding the village and their artillery is still intact. There was probably another hour's play if I wanted it, but I'd been running the game for 1 3/4 hours, and it was time for CSI. On reflection it's a bit of a mess for the British. They've lost the Gardner gun and about half of their baggage, and still have a mile or so the trek to the village and another battle to fight before sun down.

I made quite a few notes during the game and have some changes to make. The cavalry aren't working quite right yet and some of the shooting was too devastating.

Still, passed the evening, didn't it? And the Brits very nearly got a good pasting.

Email ThisBlogThis!Share to TwitterShare to FacebookShare to Pinterest
Labels: Redcoats and the Sudan, Sudan, wargaming, wargaming in sheds