Cannae have yet another go?

After some consideration of Monday's results it was necessary to have another go at Cannae with DBA 3.0. Especially as I've now come out publicly on what I think of the rule book. With all the other Monday Night-ers unavailable that meant Phil & I lined up for a Wednesday night game.

I have made some changes to the last game. I've shrunk the board and closed up to the river, for a start.

In the Roman army I have swapped out some blades for auxilia, to represent the Latin allies. They now form the outer two "wings" to the central Roman block, which is deeper. This is done to keep the 6 element frontage, and to imply some form of central reserve.

The Carthaginians now have 8 elements in the middle infantry line, with the Celts doubled up as warband and the Spanish on their flanks as auxilia. The African spears are reduced from three to two on each flank. The centre of the Carthaginian line is now thicker (as testified by the sources) but alas still does not bow as that's bad news in DBA.

All of this reflects the relative numbers within the armies better as well. Again the commands are split side to side for the Romans, and front to back for the Carthaginians.

Special rules for the scenario include the requirement for the first PIP of each Roman command being required to move the main infantry block directly at the enemy infantry. Hannibal rolls both dice, adds the PIPs together then splits them between himself and Hasdrubal, subject to neither of them having more than 6. 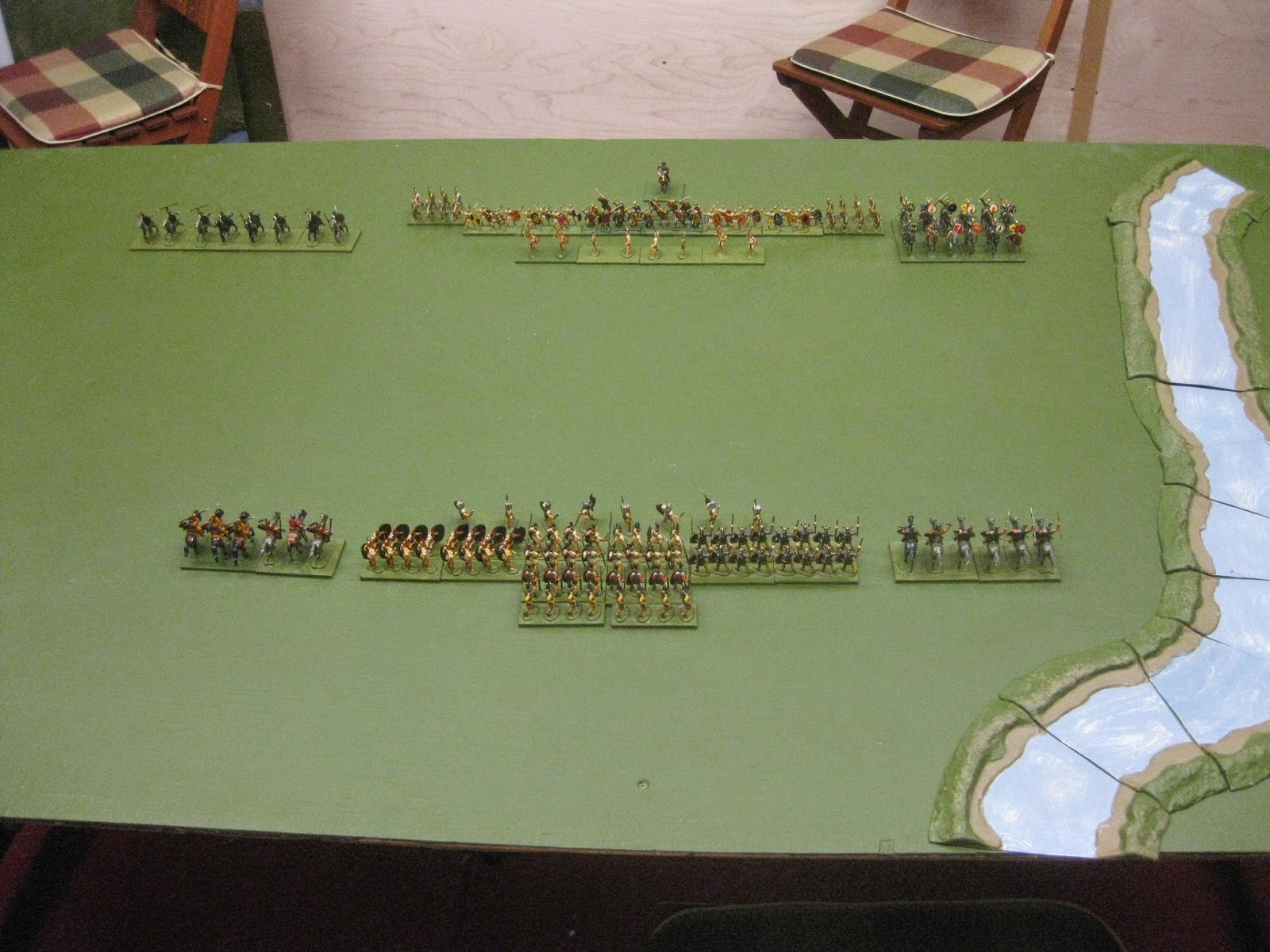 Phil took Hannibal again, and tried to recreate the famous convex line by splitting it at an angle. This opened a gap which never got big enough to  put an element through. 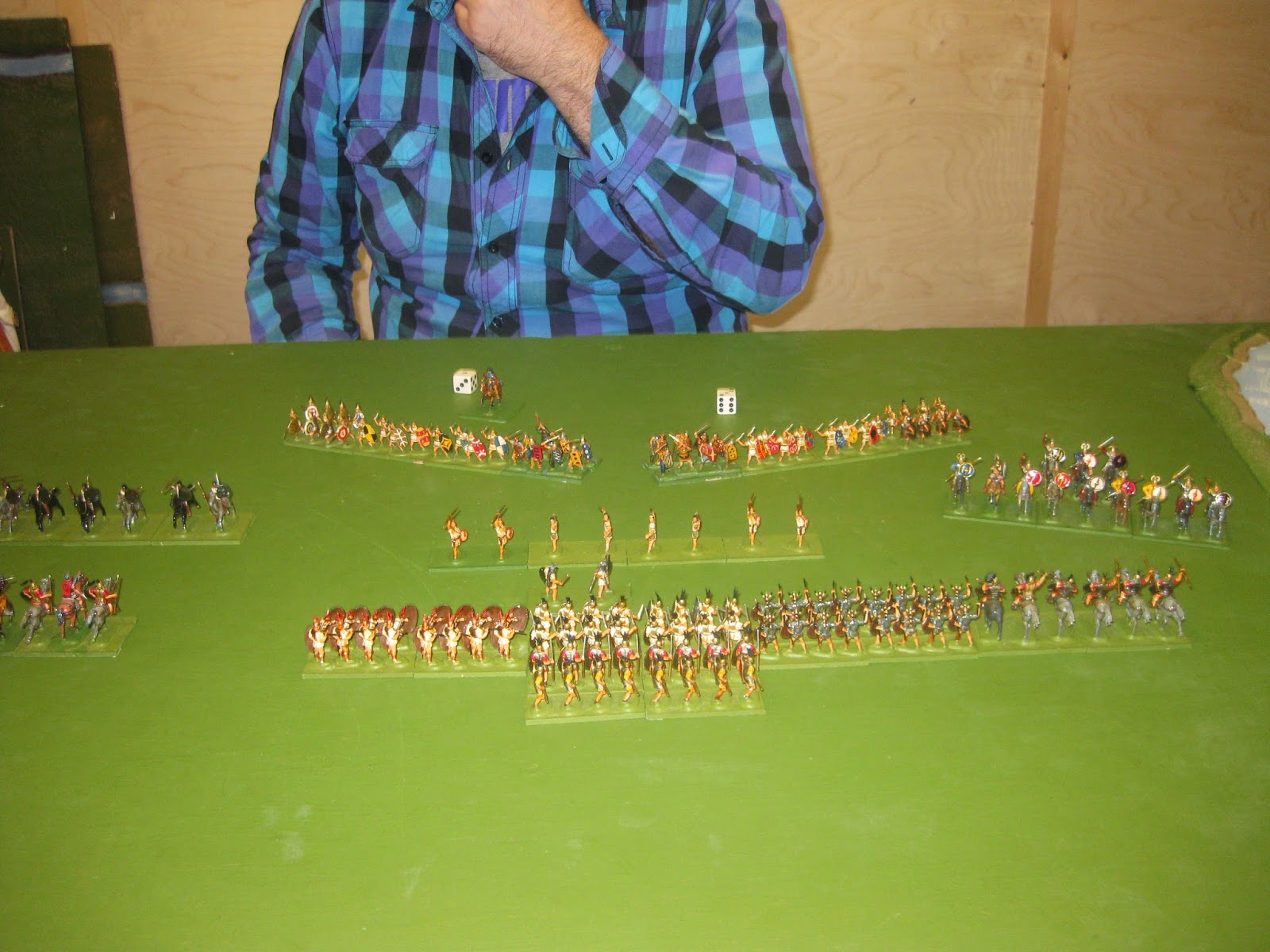 Being Roman I just advanced everywhere. 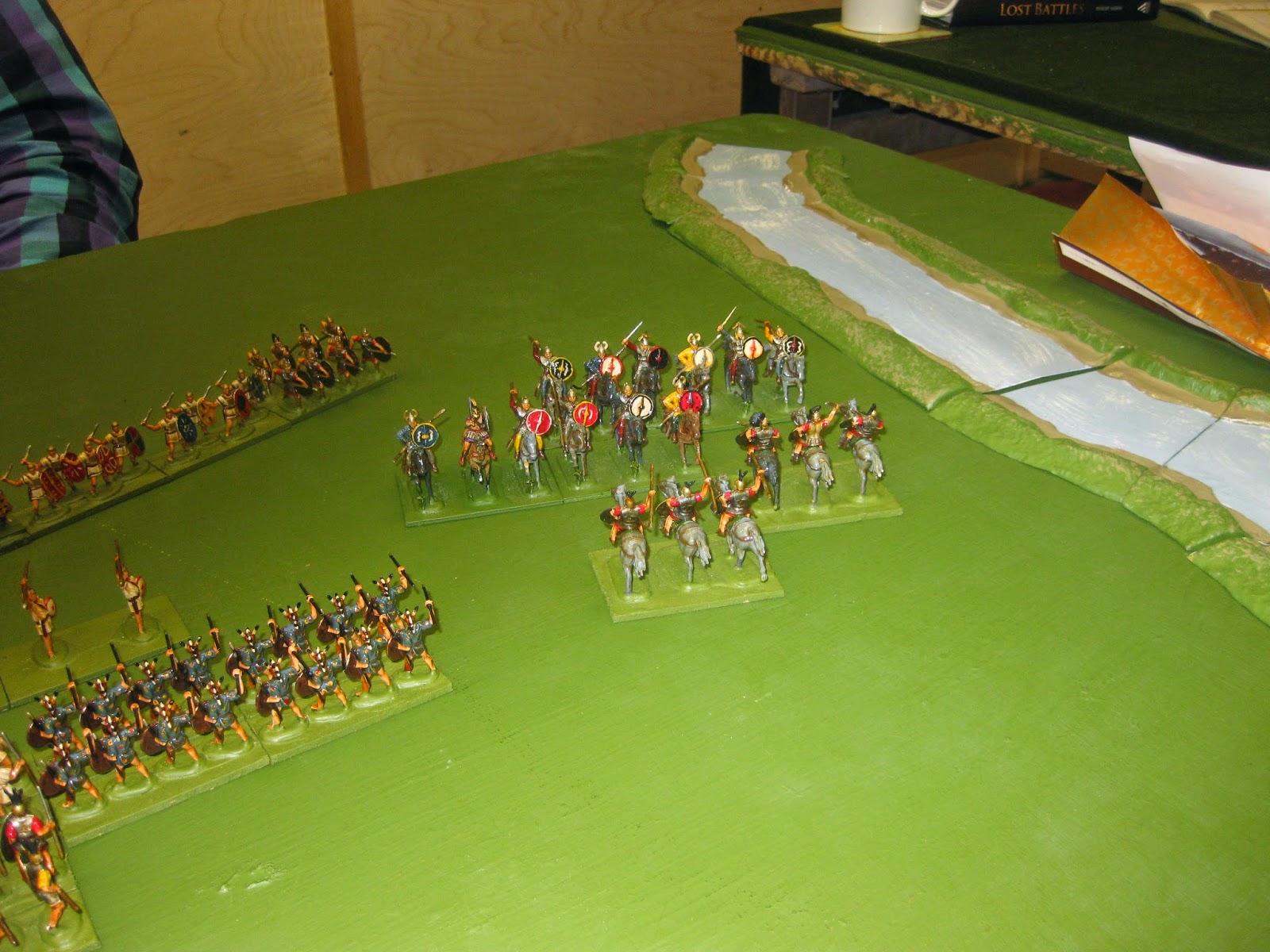 On the right the cavalry got stuck in. BTW Hasdrubal is in the rear rank 'cos that's where he was historically. 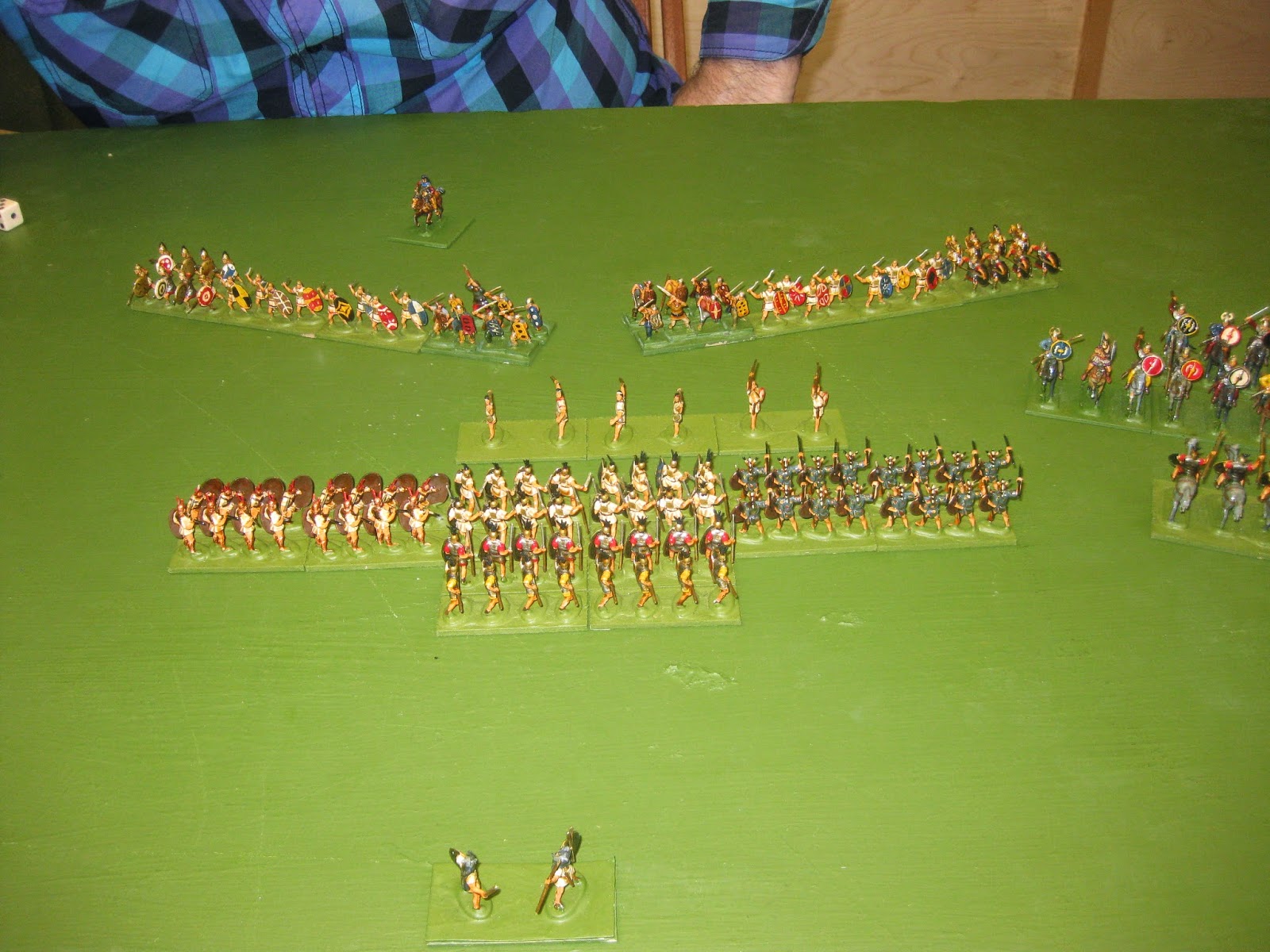 I got stuffed in the Psiloi fight, losing three out of four combats as kills. My last element of velites just ran away. 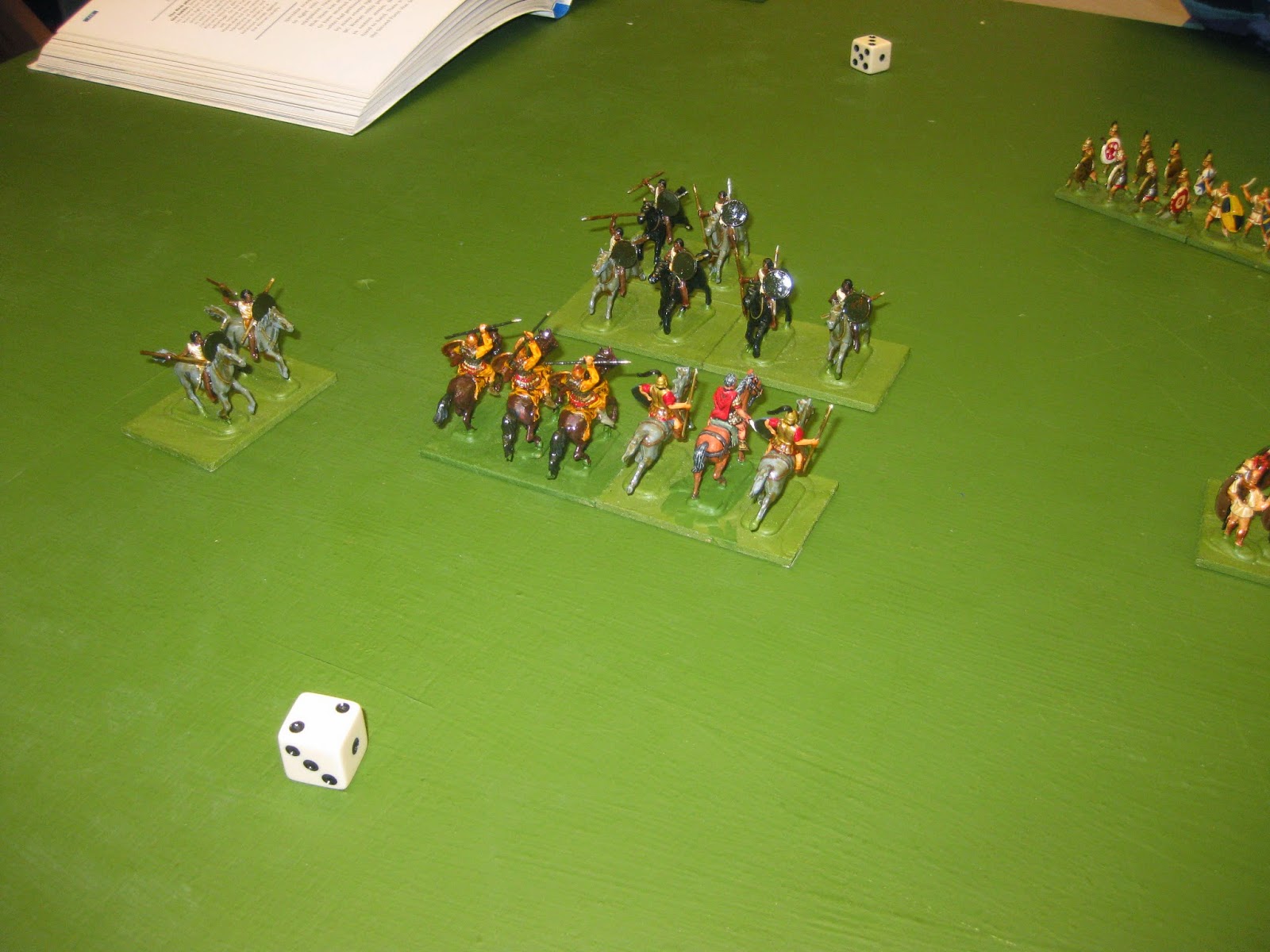 On the left Varro was being given the run-around by the Numidians. 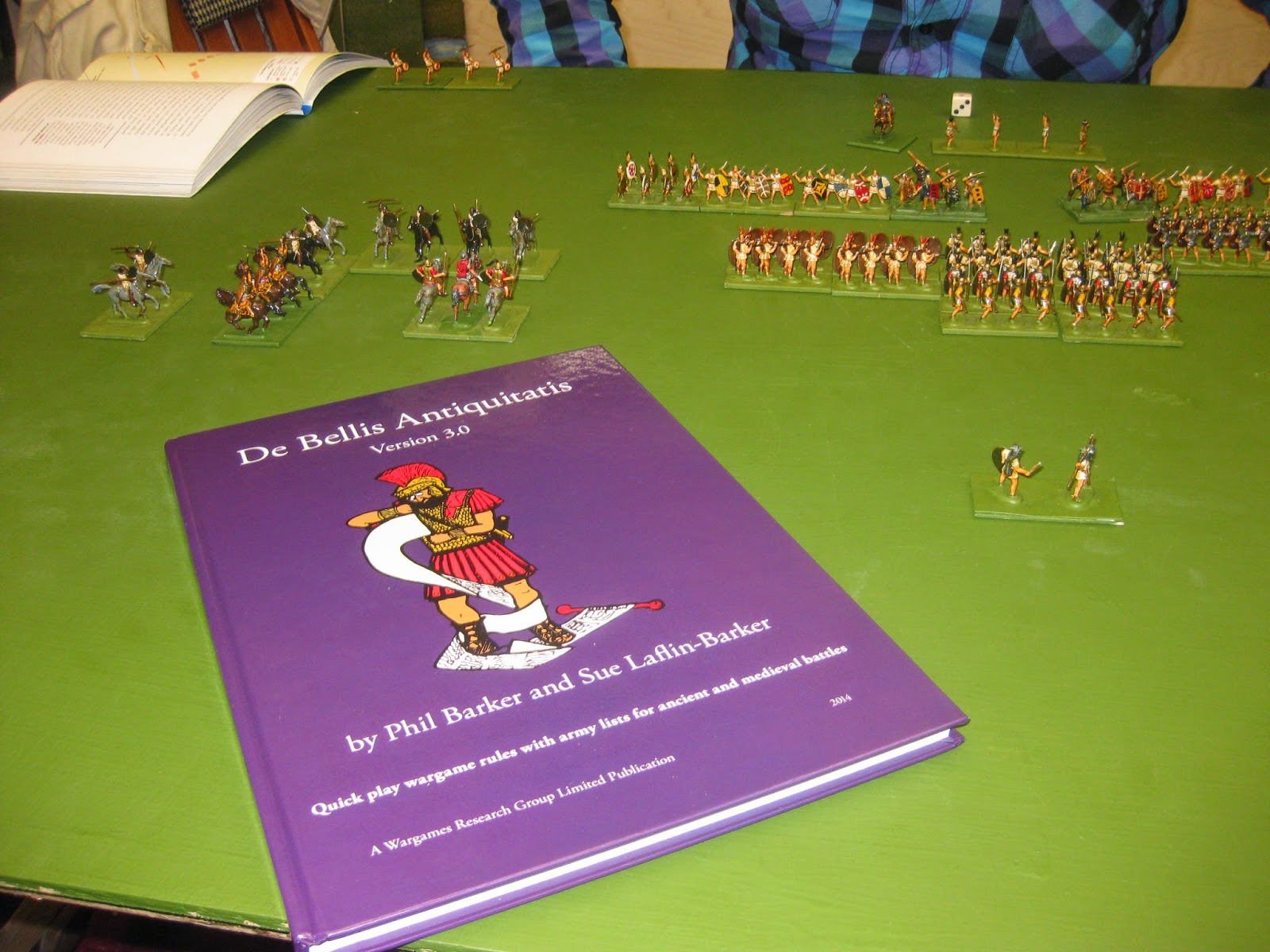 This evening we actually had a copy of the final rule book available. It's Phil's. 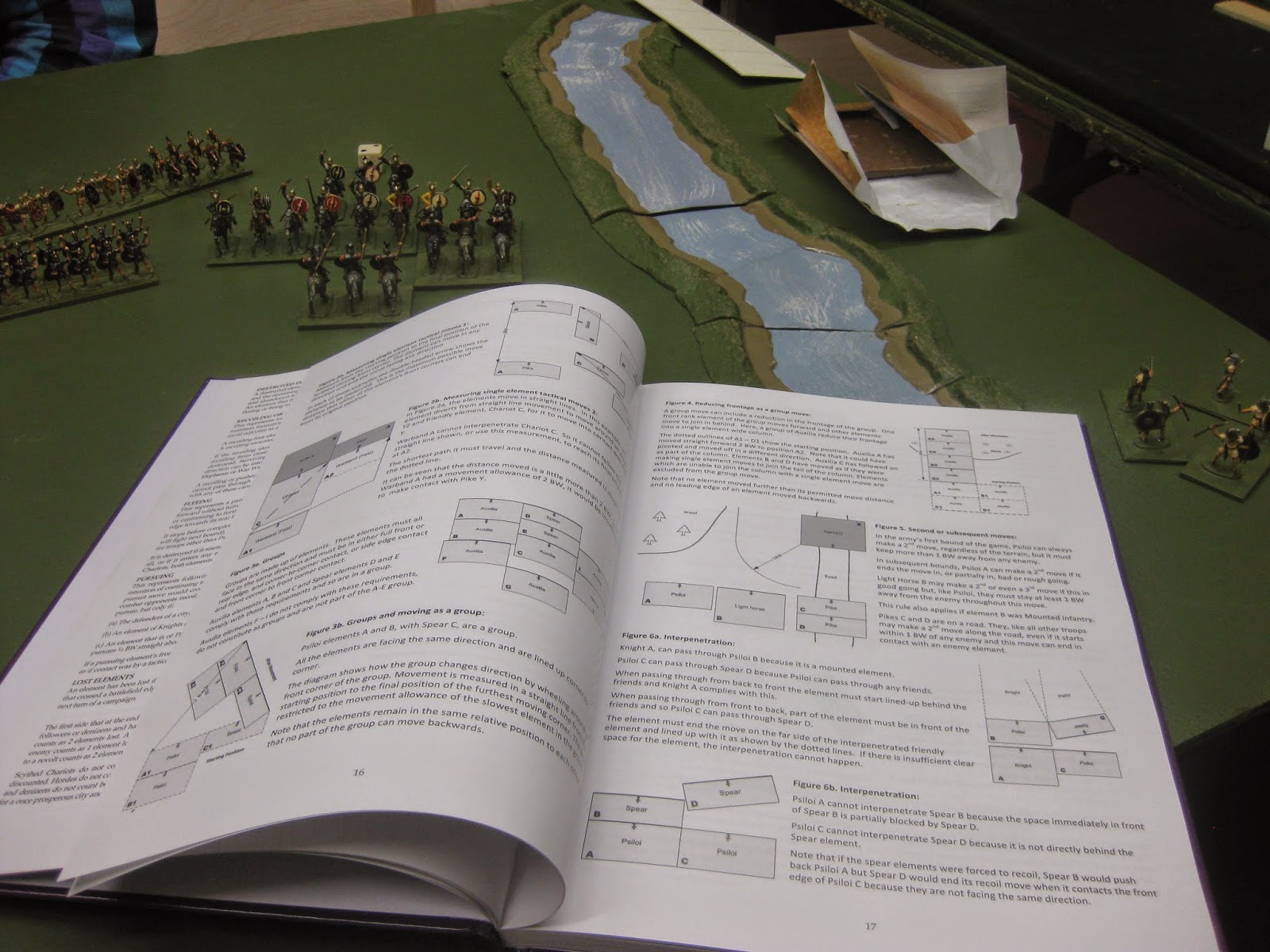 It's got lots of diagrams in it. 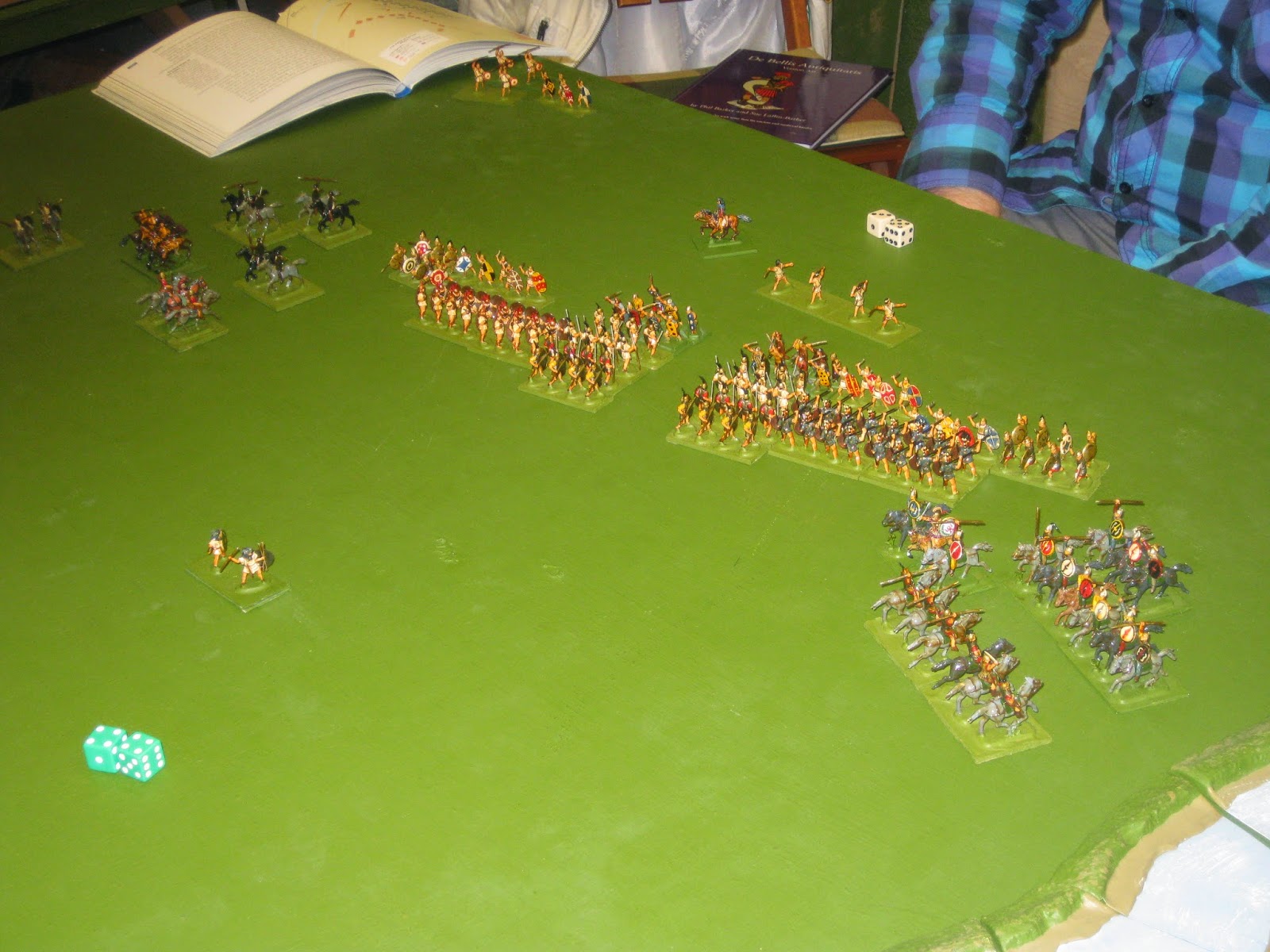 That funny shaped front of Phil's has pulled my mass of infantry apart. My cavalry is doing a good job of holding up the flanks, but those African spearmen are moving up again. 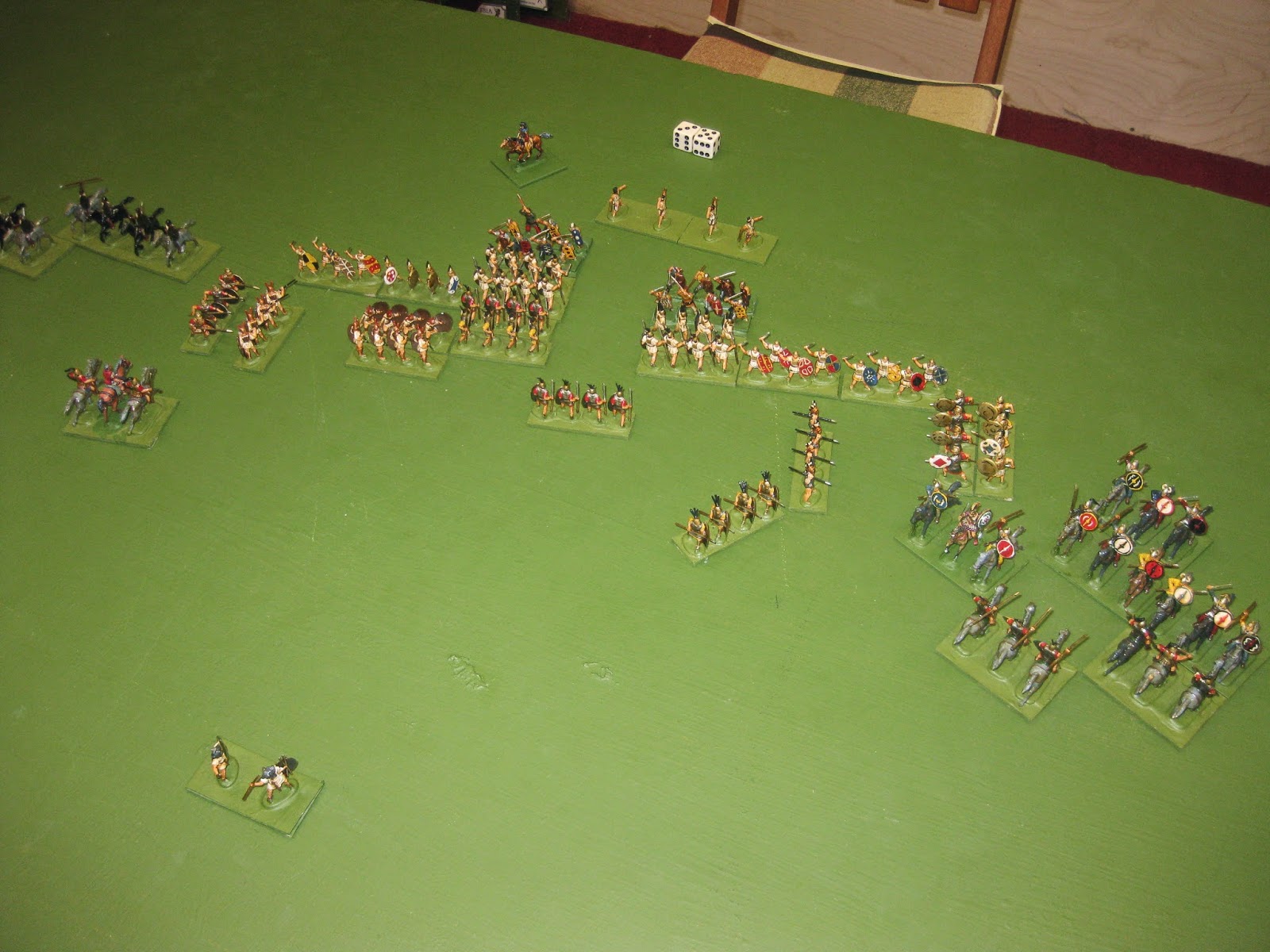 My right wing infantry has been stuffed, and the left wing isn't looking healthy either. The cavalry are finally looking wobbly, so I moved the Triarii out to shut down the turning movement. 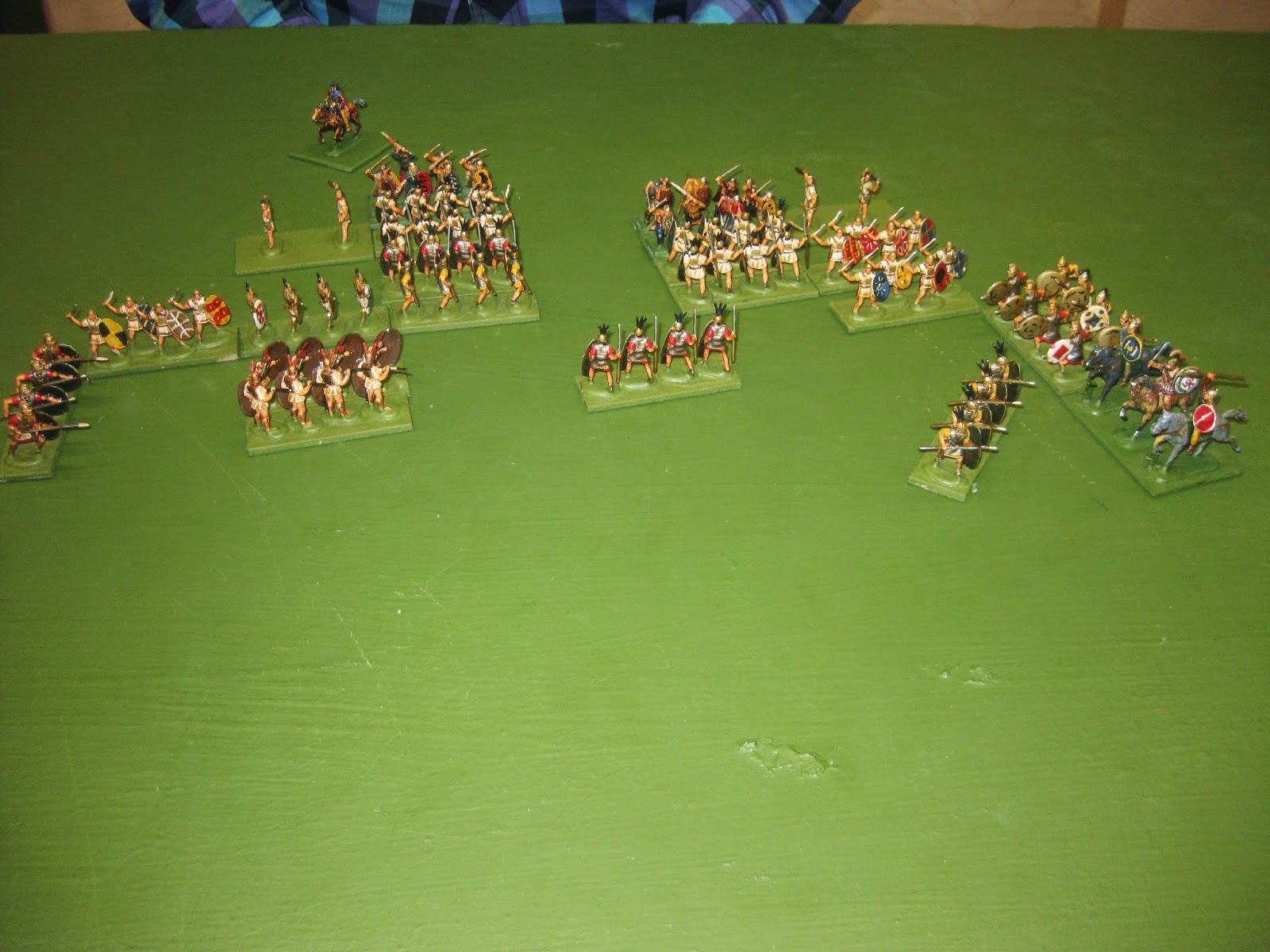 Another victory to Hannibal, and one that looks more like Cannae. We switched sides and played it again, and got another close win to Hannibal.

The game has been played three times now and Hannibal has won three times. It tends to show that the issue for the Romans is their use of the really deep formation that traps their infantry in and allows the pocket to be formed. I'm of the view that this is okay, - the battle isn't balanced if you take this into account. Plus the rule tweak in respect of Hannibal's PIPs is really, really, helpful to the Carthaginians.

The Romans can probably win by redeploying their infantry wider, and/or by butting the foot up against the river and massing the cavalry on the other flank.

But of course once you do that, it isn't really Cannae any more.

Final note: A quick re-check of my books shows that the Triarii weren't present at the battle, and were left to defend the camp(s). I will therefore swap them out for some more blades for the documented game.
Posted by Trebian at 19:32