This last weekend was the Derby World Championships, so I made my annual journey with Phil & Chris and the SOA/NBS stand. I only did Saturday this year as I'm away from home pretty much all of the week after.

Our stand had Phil's flats and the Yarmuk game in DBA3. There are no pictures of it as my camera battery went flat.

The show rated "okay" on the "Wowmeter". Best bit was meeting up with old friends like Pete Berry at Baccus and laughing over a game we both took part in over 30 years ago.

Nothing blew me away. There's loads of beautifully put on display games, but no real stunning or original participation games that I could see. Just acres of unachievably painted 28mm figures moving at a snail's pace across massive boards of excruciatingly well done terrain. A few caught my eye, however. 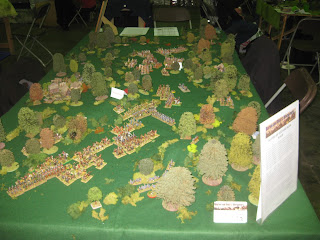 This game is Teutoberg Forest. Loands of figures. Could do with more trees. Wish I'd had more time to stop and get involved as this is a future project. 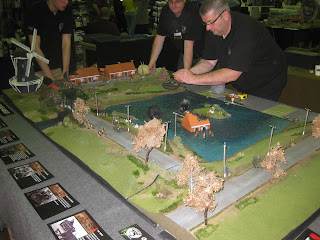 This is a 28mm WW2 game set on the Scheldt. It's USP was explosions made out of black hamster bedding stuck on battery powered tea lights. 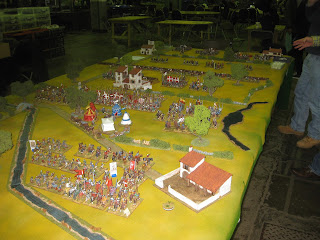 I think this is Marignano. Lots of great figures and banners. 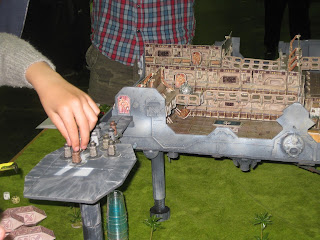 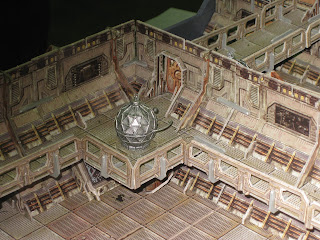 Yup. That's a Mechanoid. Created by Terry Nation as a rival to the Daleks. Made it into one series. Not a success with the viewers. 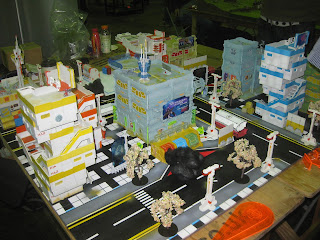 I just had to photograph this as it's just horrible. I can see what they're trying to do, but basically its garishly coloured cardboard slot together buildings. Yuk. 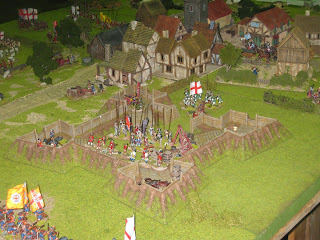 A renaissance star fort. Don't we all want one.

On the stand I played one game as the Arabs and won a stunning victory against my big brother. He'll tell you I cheated, but he's been saying that ever since the first time I beat him when we were kids. He moaned at being asked to re-roll a cocked die that had landed on a figure base. Sorry, bruv, Northamptonshire rules apply. If it ain't flat on the table, re-roll it.

As for purchases I restocked up on my paints from Colour Party, and got a couple of books, - a reprint of a contemporary book on the Sudan (bargain, - seen it for £10 more on Abe since coming home) and a hardback copy of Verbruggen on Medieval Warfare that saved me a coule of quid.

My looking for in hope item this year was buildings for my South American project. I wanted single story pantiled roof buildings. I was nearly resolved to settle for some over priced resin from Timecast when I walked past Irregular and saw these. 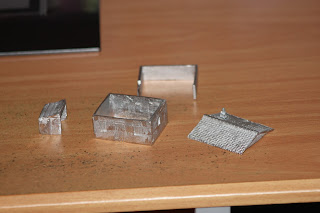 It's a new range. Multi-part buildings. The base and out house are standard but you can buy one of three different roofs, -Northern Europe, Southern Europe & Desert (the latter comes with steps up to it instead of the outhouse). You get a chimney too. You can order a garden wall as an extra. Buildings are £3.30 each, the garden walls about a quid.

These are so new they're not even on the website. I was the first person to buy any. 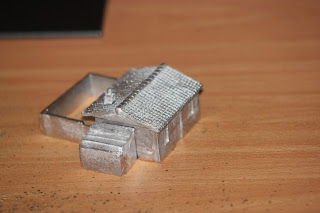 Haven't been able to build one properly yet, but I think you'll agree they are super and very affordable.
Posted by Trebian at 20:14