Mr Lockwood decreed we needed to meet again, before Christmas. Who could say no?

I'm now on "contractor break", the period from just before Christmas to just after New Year when clients don't want to see you in the office as there's no one else about and nothing can get done, so I took the weekend to do some planning and we had a day's gaming on Monday.

At our last meeting Richard said he's like to play in a game with an Armoured Train. Who doesn't?

So I agreed to set up a game of "Return to the River Don". Shame the rules don't have anything about armoured trains in them, so I improvised. 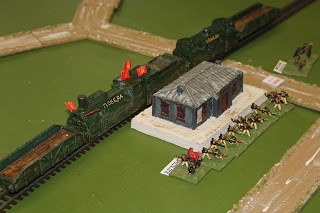 The scenario featured a Soviet armoured train, broken down in a station. Its elite guard of Black Sea fleet sailors had occupied the station whilst the engineers feverishly worked to fix the locomotive. For the purposes of the game only the gun carriage is relevant. Everything else is for show.

I warn you now, the game ended up as a bit of a Russian Epic of Zhivagian proportions, so this report may take a little while. 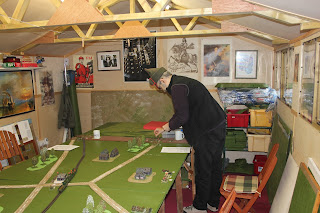 Chris arrived first and, seizing the budnovka, took control of the Reds. His forces, consisting of two infantry regiments and a some cavalry, are rushing to relieve the train and prevent it falling into the hands of the Whites. 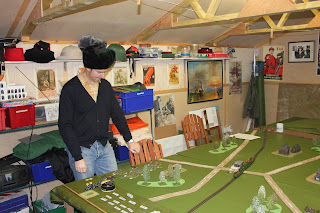 Richard arrived next, and slipped right into the role of White Commander. He has a couple of foot regiments, a cavalry brigade and some armoured cars. His units are generally smaller but higher quality. He must take control of this valuable Soviet asset. 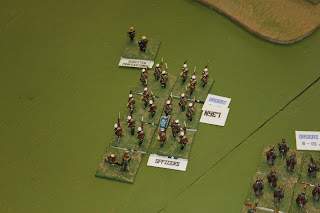 The core of "RTTRD" is the command and control system that gives units the chance to refuse orders, or say "NYET". When this occurs the player can finish that unit's move or he can attend the unit personally and coerce them to follow orders. Such coercion can have negative effects later on. Richard got a NYET in his first turn, and decided to stop. I suspect this was unwise. The little metal fellows can detect weakness in a leader. 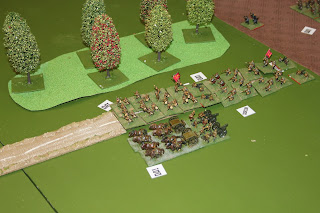 Chris experienced similar issues in one of his units, but despatched the Political Commissar and his Cheka bodyguard to sort it out. You can see the "COERCION" marker next to the unit. 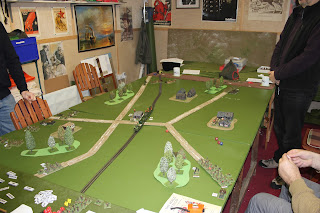 Phil arrived and joined Chris. I undertook to give Richard support and advice. 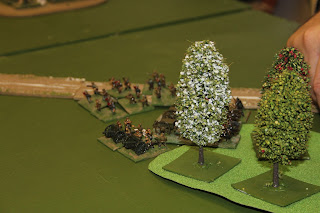 Phil took the Red units on the left hand road, and soon got his artillery deployed. He's like that. 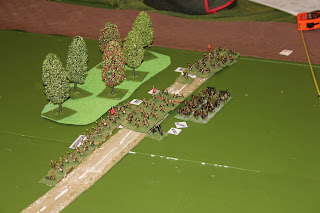 Chris persisted in having issues with one of his units, so the Cheka had their hands full keeping them going. 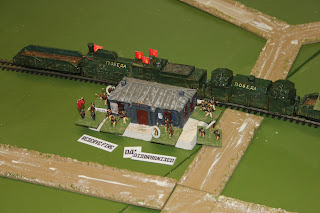 Richard soon had his artillery deployed and started to shell the station. 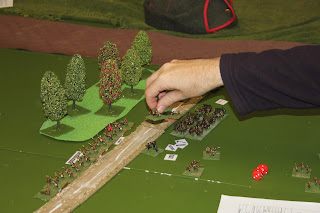 Eventually, on the third time of asking, Chris' recalcitrant unit Mutinied and marched off the table, to the impotent screams of the Commissar. 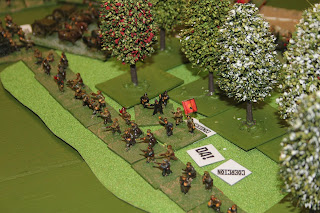 Phil, meanwhile, had managed to get a unit of conscripts to line the edge of a wood, with a small amount of encouragement from Comrade Machine Pistol. 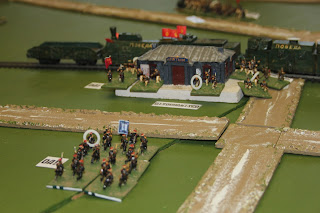 In the centre Richard had succeeded in moving up one of his elite Officer units, with the aim of assaulting the station. They'd taken some hits from the armoured train, but kept coming. 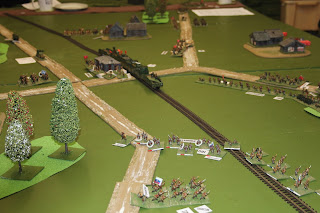 This is the situation from Richard's right. Phil's conscripts in the wood have forced his second regiment to deploy in order to deal with them. 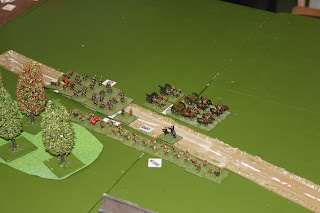 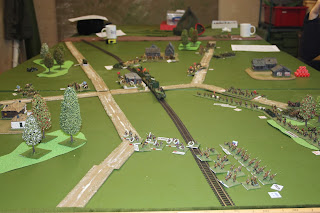 In the distance you can see Richard's cavalry moving up, and his two armoured cars, one on the road. 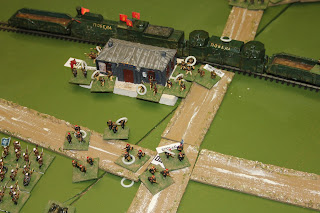 The first assault on the station goes badly for the Whites, who are broken and rout. BTW I discovered that I'd re-written the melee rules when I set the game up, so the booklet on the blog, up top right, is now out of date. 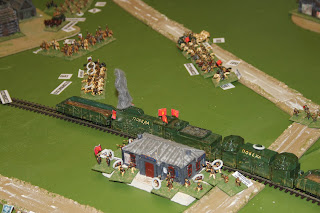 Richard was now trying to bring his superiority in cavalry numbers to bear, but The Soviets just managed to keep stealing the initiative from him. I think it was at this point that he got fed up with units refusing to do as they were told and reverted to the knout without further thought. In the meantime the train had finally got steam up. 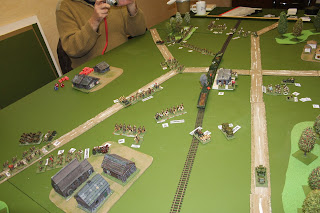 This is from the other end of the table, and it's all going off at once. On the left in the village a lone tchanka is holding back a Soviet assault column. In the right centre the Garford Putilov has opened up on the station with its main gun. The other armoured car has suffered a mechanical malfunction and is limping home. On the right of the station a second assault column is winding itself up for an attack. 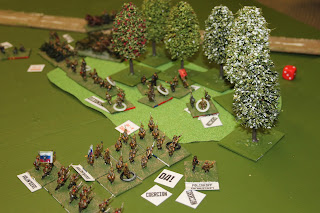 In the wood Phil's conscripts break under a headlong assault from some White volunteers. Coercion markers abound on both sides.This regiment is lead by a commander with the quality of "Enthusiastic". That is code for a "a complete blockhead who willingly shoots his own men". Ironically, due to the way the dice fell, he had a run of uninterrupted success, which is more than you can say for his colleagues. He is going to emerge from this encounter with his reputation considerably enhanced. The fate of the counter-revolution is sealed. 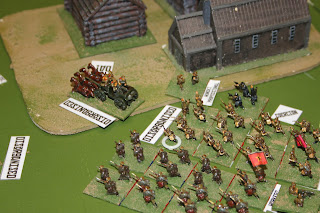 The Soviets bring up another column in their attempt to overrun the tchanka. Its heroic stand is close to being over. 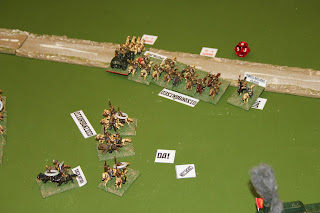 In the centre the cavalry battle ends with the Soviets victorious, much against expectations. No worries, - the Whites have another unit in reserve. 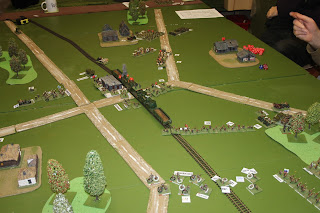 A general overview of the situation. At the top of the picture the tchanka still holds out. In the middle the remaining cavalry units close on each other. The Garford closes on the station, pounding the occupants, prior to the assault. In the wood at lower right the Whites storm through, but the rest of the regiment is in a bit of a mess, 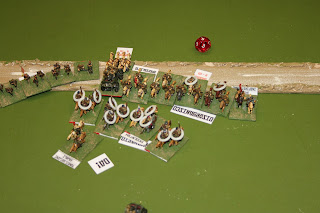 The White cavalry charge home. It's not a pretty sight, and they are bounced back to their starting position. 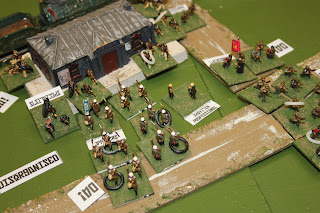 The Whites storm into the station, and break the sailors. The Red supports to the right have arrived too late. 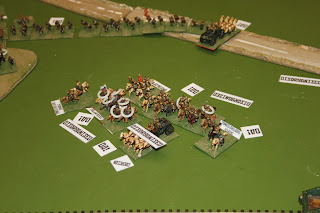 The Red cavalry counter attack, and give the Whites a complete pasting. 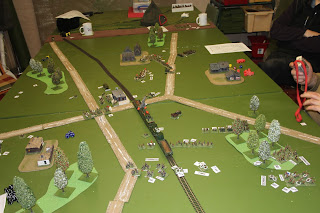 It's nearly all over. The train is moving slowly off and, although they hold the station, the Whites are in complete disarray. 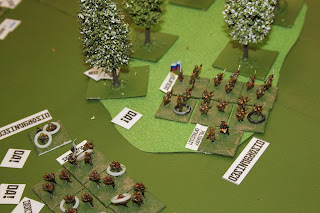 Except for the wood, where, lead by their enthusiastic officer, they boldly march off towards the Red baggage.

That was about 6-7 hours play, with breaks for lunch, coffee, mince pies and cake. It kept the players occupied the whole time, and we stayed well on message through out, with no one getting distracted.

Or talking about Star Wars.

I'd call it a success.

(An account by one of the Red commanders can be found here: Link)