So, as I said we went to "Explosion", the Museum of Naval Firepower in Gosport. It's a lovely little museum, hidden away in a housing estate. It was formerly a Laboratory, or explosive manufacturing plant. The encroaching housing is one of the reasons it's a "formerly".

It's part of the All Attractions Portsmouth Dockyard ticket, and you can get from it to Portsmouth Dockyard on the Waterbus or the other way round. If you're on the Gosport side of the water and the times fit that's convenient as the car parking is free too. Don't get shut in, however.

They weren't having a good day when we went. The bomb squad had just left and the ticket printer wouldn't work. Kudos to the lovely lady behind the till who was still keeping it together. 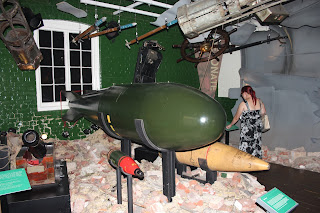 The entrance hall has a nuclear bomb in it, It's sort of an opening where you wonder what they're going to do to top that.

The first area after this is about the "Laboratory" and features staff lockers with interesting paraphernalia and voice recordings of former staff talking about what it was like to work there. Fascinating. Although of course we're all really there to look at the weapons 'n' stuff., rather than indulge in all that social history stuff. 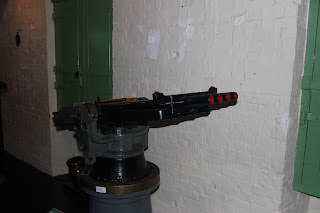 They've got small arms as well as big guns and bombs. Good gallery display of the former, including this nice Naval Nordenfeldt. 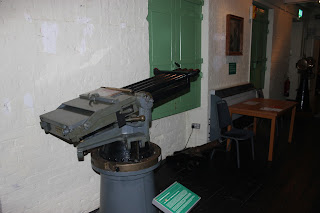 Much under valued weapon in my opinion to the modern wargamer and military history buff. Everyone goes for the Galting Gun, but the Nordenfeldt is a more successful and wider spread weapon, especially amongst Her Imperial Majesty's forces. Also the Naval MG of choice for the Peruvians and Chileans. 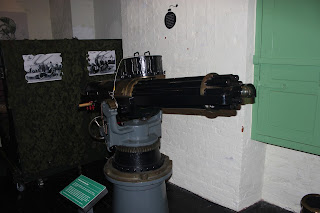 Anyhow, here's a Naval Gatling with a drum magazine. 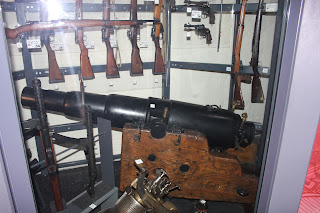 Oh look! A baby Armstrong RML, and lots of WW1 rifles. Had an interesting chat with Miss T's partner who is a Canadian about the relative merits of the Ross Rifle and the SMLE. He was aware of the issues. Taught about it in school. 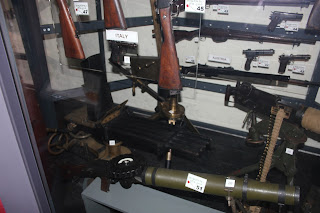 And looky there. A Lewis Gun. 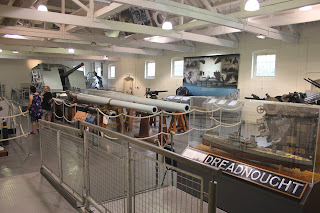 They have a Big Gun hall too, devoted to the development of serious big gun ships like the Dreadnought. 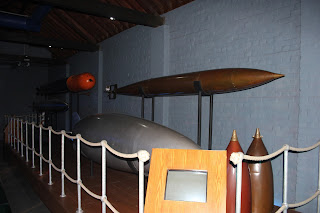 This is a Whitehead Torpedo, in the Torpedo Hall*. Not many people know that the daughter of the inventor married a Captain in the Austrian Navy. They had seven children and after she died he married his children's tutor who had been intending to be a nun**. 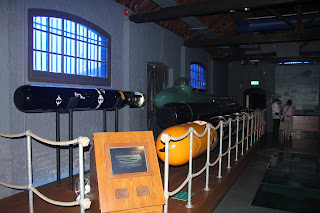 See. Serious lot of torpedoes in the Torpedo Hall 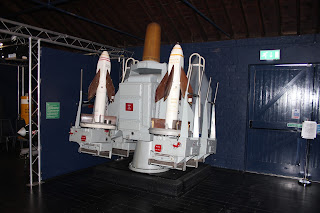 There was a Sea Cat launcher in the next room. Never realised how small they were. 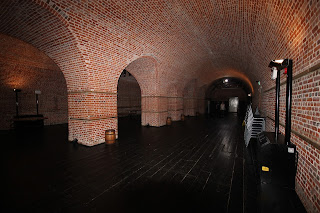 This is the old explosives storage room. It's quite big. You can book it for events or get married there, if you want.

There's also a load of guns & things outside. It is quite interesting to get to look close up at the size of these things. I have nothing clever to add here, so I'll just caption the pictures.

I like the car for comparison on this one. Also remember seeing this on a Leander class frigate when I was small on holiday near Plymouth.

Yes. A very satisfactory afternoon's visit. Don't know what the rest of the family thought.

*Obviously
** She doesn't appear in the musical version
Posted by Trebian at 09:54