What a bunch of Guise-ers (part 1)

It was a warm September evening, so back over a hundred years to the hot and humid fields of France for the Battle of Guise, 29th August 1914. Well, not all of it. The German 2nd Army left flank mostly.

The scenario was written by Richard Brooks and kindly made available to me. I had the Germans and Phil took the French. 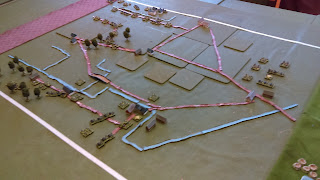 This is the set up position. The Germans are bottom left corner of the picture, with two Corps, just crossing the River Oise. The town of Guise is on the right of the German position and straddles the river. The German Corps are X Active Corp around Guise, and Garde Corps behind them in the wooded area around the villages of Malzy and Englancourt. We only think one French corps is in front of us. We're headed to Paris.

The French have about four corps worth of troops. III Corps is at Mont D'Origny on the extreme right of the picture. X Corps (confusing, isn't it) are in the middle left marching up to the Foret de Marfontaine, acting as a flank guard to I Corps just this side of the river on the far side of the table. 37 & 51 Divs are in reserve, the other side of the river. The intention is to use I corps to attack the inner right wing of Bulow's 2nd Army , which is off the table to the right. This will relieve pressure on the BEF, also off table. 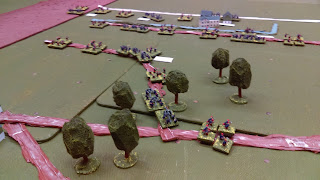 Only a few units are active as dawn breaks. One of these is French X Corps, which is pushing along the ridge line to the town of Sains, that dominates the plateau. 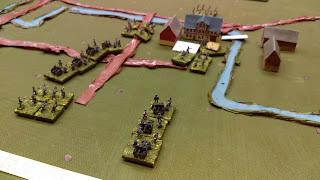 The Germans are all up at the crack of dawn, but aren't favoured with the movement cards they draw. 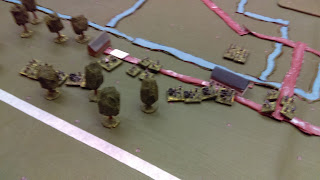 I also manage to create a traffic jam for Garde Corps crossing the river, which doesn't help. 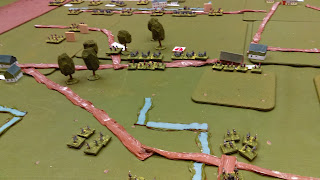 Phil managed to get on the crest line first, and deployed his guns. He also put a brigade into Sains, which looked like a tough objective for me. 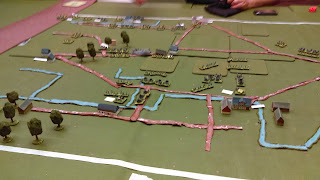 Having won the race to the crest line Phil was able to open up with his soixante quinzes. He immediately started to blow lumps off my infantry. At this point I'm in a bit of a disagreement with the author that this scenario can be in anyway close or tense. How can that be the case? 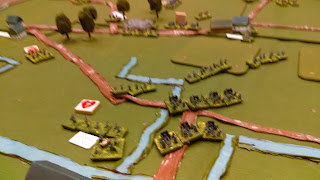 The answer is I have lots more guns, and furthermore I've got howitzers. The soixante quinze marvellous tho it is ain't any good at firing over stuff, and we're fighting over a plateau. Also some good luck meant that a compulsory assault on Sains by a single German brigade ejected the defenders much to Phil's chagrin. In his defence he did nothing wrong and still got beat. In terms of simulating reality it had a correct feel to it, - odd stuff like that happened all through the summer 1914 campaign and the answer is just to counter attack with as many guns as you can muster. 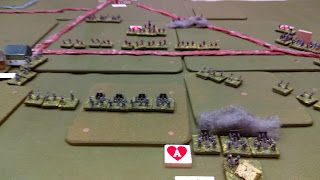 Elsewhere the French were alert to the German presence and were throwing everything at me. Here my howitzers are giving some much needed succour to X Active Corps, which has most of three corps worth of French bearing down on it.. 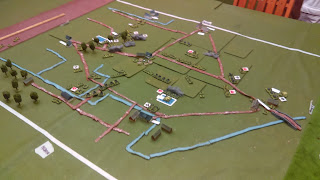 This is where we stopped for the evening. The time is about 1:30pm, game time, so about half way through. The blue playing cards represent corps that have taken 25% casualties so are in danger of becoming exhausted.

It's looking highly unlikely I'm going to be able to complete the drive on Paris.
Posted by Trebian at 22:30