Back in the day when I were a lad and we had gaslights in the street and so on the appearance of a new Airfix box of figures was an event and you bought them regardless of whether you had an interest in the period.

As you twisted them off the sprues, rubbing down the resulting plastic knob on the base on your Mum's coffee table,  you always had a pile of figures you weren't really sure what you were going to do with them. Some had their rifles the wrong way round or they didn't have weapons at all or they were in daft poses. Still they went in the box and got played with anyway, falling by the wayside as wargaming got more serious and the figures had to be based in units.

The predilection for designers to produce odd figures hasn't gone away. Hat are pretty good in this respect and everything is normally usable, so it isn't a problem I have most of the time. Zvezda are only occasional transgressors as well.

Which is more than I can say for some of the other manufacturers. Strelets spring to mind, for example.

Now this isn't a problem for me as I don't really do Strelets. Not so for my ex-work colleague, Mark C, who has featured in these pages before. He's a man who buys a lot of boxes and he is a Strelets devotee. He's a man who will buy boxes just to get his hands on one or two figures in them, and I think he sometimes buys them blind or on spec.

He was building a Norman army out of Strelets figures, and had ordered boxes of all they had in their range (they make 8 different ones). Some of the boxes have a lot of odd figures that I think tested even Mark's patience. In one of those cross desk conversations we used to have he offered me a bag of oddities, and being a man of his word delivered.

My idea, when he mentioned them, was to use them in a camp model for my Feudal Spanish. I was looking at the time at the battle of Zalaca (about which I have written before on this blog) and that is a battle which actually does feature a camp, such as it is, complete with camp followers and so on who are important to the outcome.

Fast forward a few months and I finally found the time to put my idea into action, and paint up a few bases worth of them. I know under DBA you only need one base of camp followers for any army, but I thought a full four bases AMW unit might look okay. You can judge. 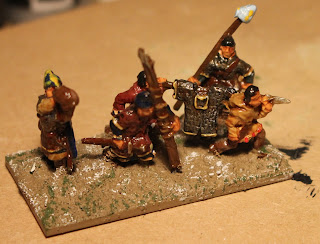 These are from a couple of different boxes. I think they're called "Normans on the March" and "Norman Camp". So here you have some chaps carrying a suit of chain mail, someone carrying lances and a chap drinking. 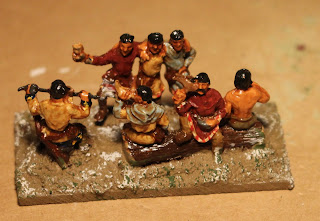 Then there's some fellows having a good time drinking and eating. I guess these are from the Camp box. 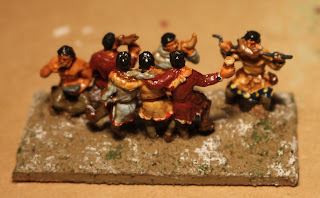 They do seem to be having a good time. 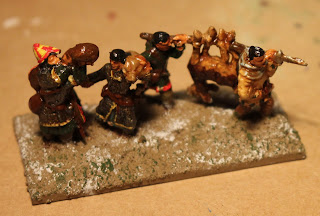 And here's another Norman drinking,  some chaps who have been hunting and a knight dragging along a small child. 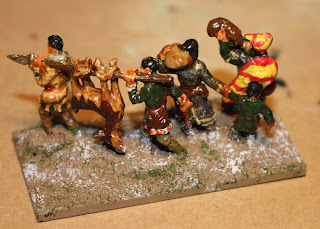 Yes. He's dragging a small child. Don't know why. Fill in your own narrative. 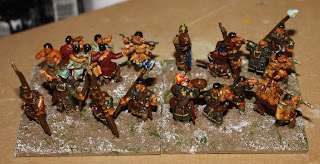 Here we are with all of them together. They're a fearsome looking bunch, I think you'll agree.

And ready for a game tonight.
Posted by Trebian at 18:14