A bit of Eye-talian Candy

I just realised that my latest project, although nearly finished, hasn't had it's own blog posting. My Spanish Civil War Italians have featured in a game, but haven't graced these pages in their own right.

Time to correct this oversight.

The lack of SCW Italians has been a big hole for a while. When I knocked together some Basque units earlier in the year it became even more evident that I needed to sort out Mussolini's men fairly sharpish.

The Italian TOEs didn't change much from the SCW into WW2. They improved their armour after them found that baked-bean tins weren't a match for T-26s, but otherwise they kept things as they were. Whichi s good, as I have a book with that information in it.

My figure organisation for SCW is based upon my original set of rules, "Send Not to Know" which has 9 base battalions (4 x 2 base companies plus a command base), so these split down comfortably into a couple of "If You Tolerate This" battalions, each with four bases. Artillery is likewise equally flexible.

My order to Peter Pig in February gave me enough for a Division, roughly, including the Fascist Militia battalion, and I filled the artillery (apart from the infantry pack guns) and armour out with an order from Skytrex. 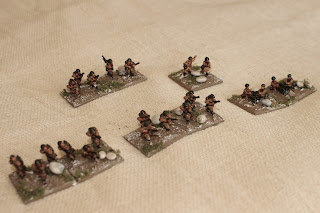 Here's a whole SNTK battalion, with a mix of firing and advancing rifle men. Technically the HMG company should probably have a mortar base in with it. I went for the tropical uniform as that appears most in Bueno's illustrations. Plus it makes them easily recognisable compared to most of the other troop types I'm using for this period. I also like the colour scheme of sand uniforms with green helmets and equipment. Very stylish. The officers, of course, wear a slightly lighter colour and have brown leather webbing and boots. 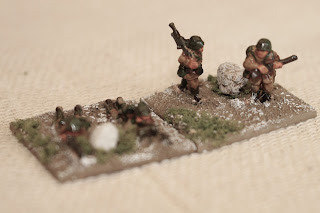 The LMG pack gives four pairs of gunners and loaders, two pairs each of standing and lying down. 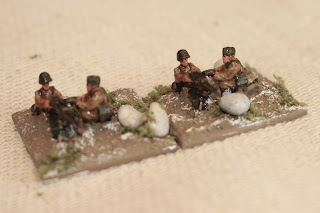 A close up of the HMGs. Annoyingly the loader has a chip bag hat, not a helmet. More annoyingly, as with all PP HMG packs, you get three gun teams and two miscellaneous "command" figures. I'd rather have four gun teams. If I want officers, I'll buy an officer pack. 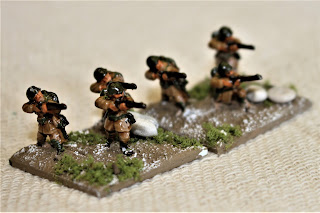 The firing poses. Good mix of standing and kneeling. 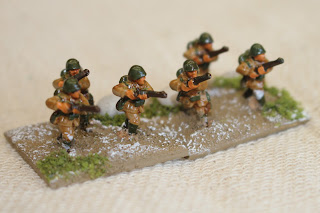 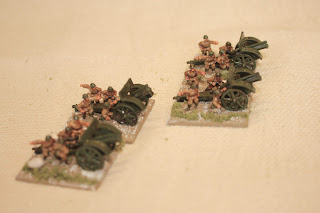 These are the 100mm howitzers. They are Skytrex with Peter Pig crews. The model went together really well, once I'd trimmed the axles down a bit. 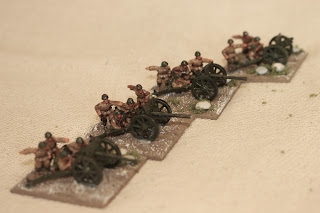 The 75mm artillery. Three field guns, and a single howitzer. Found these a bit fiddly, but that could be because I'm using cheap super glue. Again Skytrex guns and Peter Pig crews. 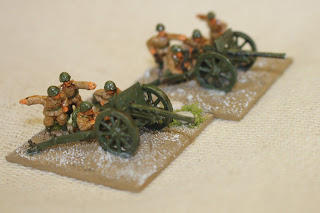 Another shot of the field guns. 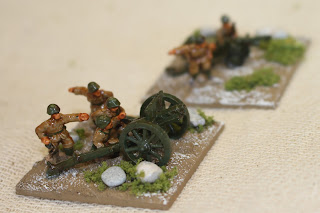 A close up of the 75mm howitzer. That's a Peter Pig 47mm pack gun in the background 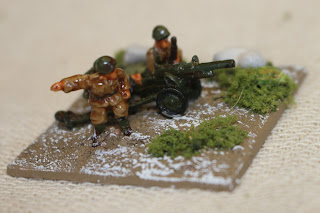 This is the 47mm gun in focus. 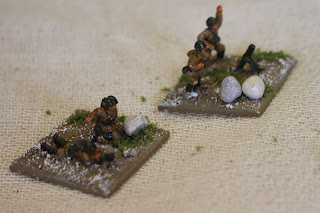 Whilst I mainly represent the support weapons companies as HMGs, I bought some 81mm mortars as well. And some of the small infantry mortars. 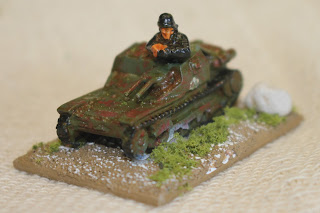 The infamous CV35, again from Skytrex. I drilled out the hatch and put in a Peter Pig commander. Had to improvise a hatch cover. Shame they're moulded on, really. 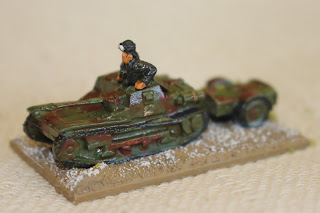 And finally the CV35 flamethrower tank, the version of the CV35 that was worth having. Again drilled out and given a Peter Pig crewman. I also shortened the towing bar for the trailer to fit it on a shorter base.

Be prepared to see them in some battle reports over the next few months.