As we never got around to using Basic Impetus at the Battle Day, we had a go in Shedquarters this week. One of the reasons I didn't run a game myself at the time was I didn't have any of the relevant figures. I still don't, so it looks like my Reconquista armies will have to stand service in this regard. I also don't have any middle-Eastern cities, so my old Roman Marching Fort made a very rare appearance as the gates of Arsuf.

Also gave me a chance to get out my 25mm baggage train as well, which hasn't seen the light of day for quite a while. Alas I couldn't get everything on the table, but it's a fair selection. 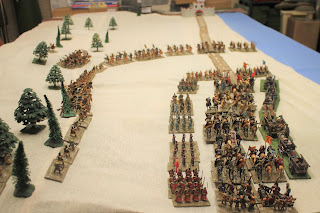 This was the first time we'd tried the battle with BI, and it's only the second game I've put on with the rules as well, so I wasn't expecting to get everything right first time. I wasn't sure of the table size either. The army points system for BI is a bit crude as well, and I also ran out of the Arab figures I needed to use.

There are a number of issues that need to be addressed in the rules as well as they don't really cover armies on the march. Consequently I've introduced infantry in column of march and also leaders who can move between units. For this game Phil took the King Richard and the Crusaders* and Will was Saladin. 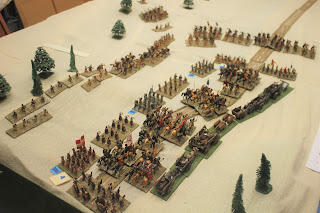 Will had the initiative for turn one and closed in on the column, showering it with arrows. He inflicted quite a bit of disorder on the infantry, even causing one unit to suffer a permanent loss to its VBU (or combat strength). At least they were fulfilling their role of protecting the cavalry. 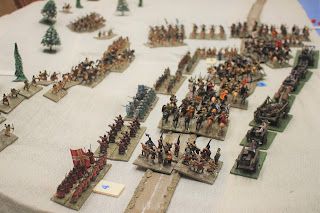 Phil pressed on with his wagons whilst halting the disordered infantry to redress its ranks. At the head of the column he opened up a gap to allow his knights to charge out if required. 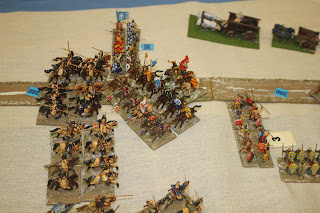 Phil won the next initiative roll so got a back-to-back turn. It started to get a bit tasty at the head of the column as King Richard joined up with the Templars to charge the Muslim horse that had got a bit close. 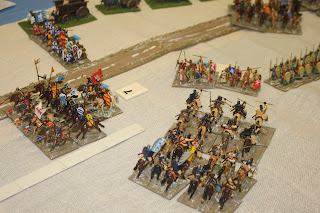 The Templars cleared the cavalry in front of them but took a hit. I use Rummikub markers to record the drop in VBU. Once a unit has suffered a permanent loss to its VBU it also loses its impetus bonus, which is really serious for troop types like knights. Meanwhile Will has lined up some units to shoot up the infantry then charge them. 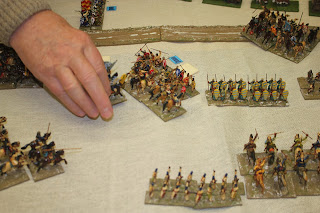 Which duly happened, Now it is own up time. Those foot have long spears which deny impetus, which I had forgotten. The ghulams therefore rolled several more dice than they should have and broke the Crusader foot. 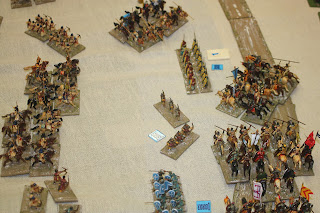 It is getting a bit tense for the Crusaders. Massed archery from the Muslim horse has broken the crossbowmen in the centre of the picture. Ghulams threaten the shaky spear unit at the top. Can Richard/Phil get those knights lined up to save the day? 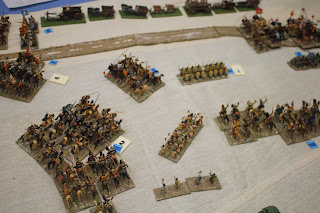 The spears step forward and the knights wheel round their rear to plug the gap. The Templars under Richard, after an initial hiccup, after causing a bit of chaos are regrouping on the left of the picture. 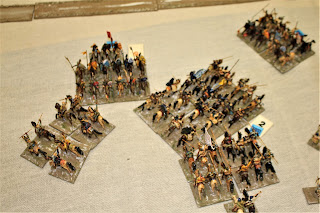 Richard wheels round and clatters into the flank of two light horse units that have nowhere to run to (in BI you can only evade if attacked from the front). The other knights are lining up to charge the ghulams in the centre. 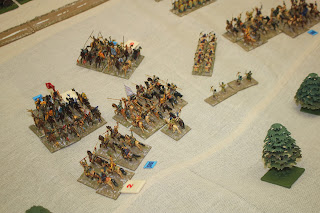 Richard finally breaks the light horse, and the other knights clear out the first ghulam unit. Saladin is there, however, with his elite guard. 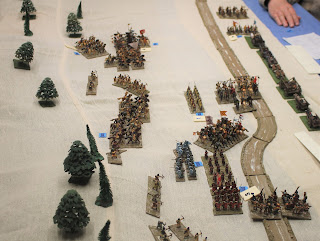 Saladin and his guards see off the knights but Richard is still carving up the rest of the Muslim cavalry. The rear guard are moving forward fitfully, but the baggage train is making good progress. 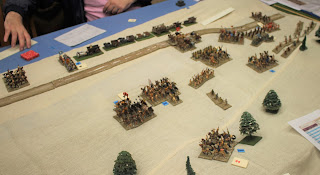 It's getting desperate as the Muslims start to throw horse at the Crusader infantry (this is me, BTW, - Will has gone home as it is getting late). Phil has some knights nicely poised in the middle of the table to prevent Saladin exploiting his breakthrough. 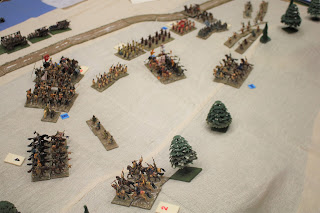 Saladin has been duly confronted head on and is taking a beating. Phil has freed his Hospitaller unit from the confines of the column is about to sweep up the remaining Muslim formed foot. Elsewhere a desultory rain of arrows falls upon the rearguard.

It was about now we ended the game with Saladin's forces pretty much broken. I could have extended it by bringing on Muslim reinforcements, but that was really enough.

BI worked okay, but there are issues with a scenario like this which isn't a straight stand up and fight battle. FoG actually did a better job at the Battle Day, but then Phil had spent more time thinking about that game than I did about this one. Were I to persist (which I probably won't) then I think this could turn into a really good scenario.

Even with a smaller army in terms of "VD" (unit value) Saladin's men gave Richard a hard time. I think the lesson from the Battle day and this game is that the odds are stacked against Richard and this really is a major achievement for the Crusaders. It could all have ended very badly.