As I mentioned at the end of my blog post on my relationship with SPI games I was thinking that "RAID!", the game of Commando operations in the 20th century, might translate into a figure game.

I have duly marked up a cloth and gone about transferring the terrain from the hex map onto my table top. This has been a reasonable success although I can't do all of it due to the size of the original map. This was designed to be used for several scenarios, so you don't normally use all of it. The attack on Entebbe scenario uses the top left of the map, and an assault on a bridge takes the bottom left, for example. I've struggled with how to represent the contour lines, so these have been ignored for now. What's more the terrain classifications are delightfully vague, so I've improvised there as well. If this goes okay I'll make some appropriately shaped felt templates. 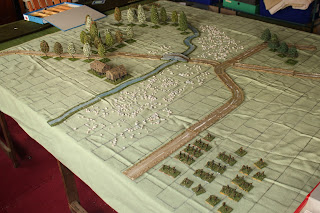 My river and road sections seem to fit satisfactorily as well, although you do have that irritating side effect of the hex grid meaning you never get a proper crossroads as everything is on a slant. 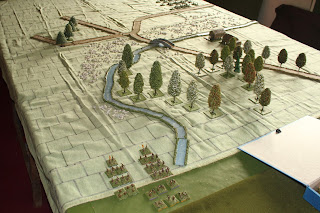 As to the units involved the set up is pretty much a dead on match for how units were constructed for PBI2, with platoons made up of three squads or sections, each made up of two fire teams, supported by LMG and HMG teams. Command is represented by a platoon officer base. My only issue is that I need to differentiate between the two fire teams as one has the section leader in it.

The original game has some rules about turning counters over to conceal them, but in effect all this does is show you what units have been observed, and you check that every time you shoot anyway.

There's a lot in the game that has made it down to our time, whether consciously or not. The rules cover Direct and Indirect Fire, as well as Overwatch and Opportunity Fire (so far, so PBI in many ways), and there's some simplification for armour, as all tanks count the same (so far, so AK47 Republic).

It looks to me there some good stuff in this system. Whilst the rules are written in SPI house style and take a lot of words to say the obvious there is a simplicity to all of it which is irritatingly absent from, shall we say, "Sniper!". However, who in their right minds buries movement distances in the middle of a paragraph of text. I ask you. Anyway, had to do my own QRS in the end.

I have some other matters to work on, - such as the indirect fire mechanism - but hopefully this is a good starting point.