I wasn't intending to go to the Battle Day this year, but following a chat with Phil earlier this week I agreed to go along and help out. His aim was to run an experimental type of game, looking at using several different sets of rules. I've never really had much to do with the military side of the Crusades, so I was ambivalent about taking part, although I did do a matrix game at the Dorylaeum Battle Day several years ago.

Plus it would give me a chance to sell the Northampton game to a Society of Ancients audience.

The Battle Day is always interesting as it gives you a chance to look at how other people think about their wargames. It's also one of the few "Society" events that gives members a chance to meet. Richard Lockwood, the organiser, is keen to try to foster the "club" feel of the Society that it had in its earlier days, so he does the Battle Day and also organises the resurrected Society Residential Conference. He deserves your support. 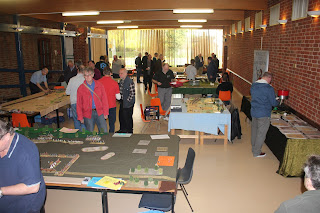 The location is always Sycamore Hall in Bletchley, which is sort of central and not too hard to get to. This year had 6 or 7 games, which is slightly down on when a classical period game is run, so the stage area wasn't used. I took some pictures of the games setting up. 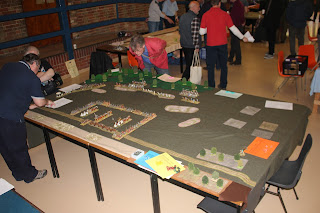 I don't know what system this was, as I couldn't see a rule book about, and everyone was very intent on setting it up. I meant to go back later and check, but never did, as we were a bit busy. 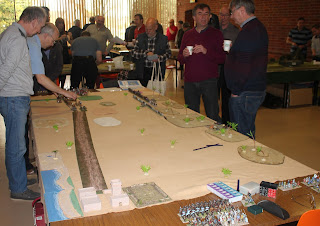 This is Richard Jeffrey-Cook's game, using his "Lap of the Gods" rules. This is available as a download from him, as far as I can tell, and may soon be in hard copy from the SoA itself. Be good to see the Society back publishing original material. It won the best game prize on the day. 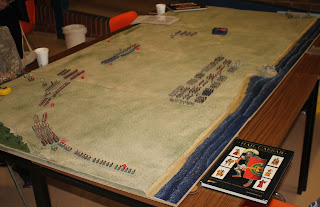 Here's a 10mm game done with Hail Caesar. It had an interested audience all day, and seemed to be doing some interesting stuff. 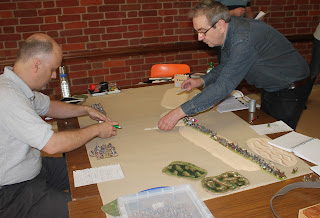 Martin Simpson was there with Big Battle DBA, I've known Martin quite a few years, - he used to attend my "AK47 Republic" event known as Brixcon - and he always supports the Battle Day. Good chap. 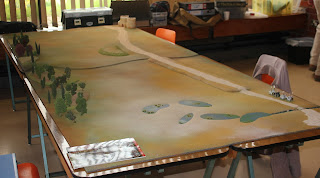 Don't know what the game was, but it won best terrain. Could be Armati? 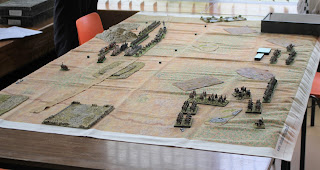 Vincent Auger from France, former Armati stalwart, put on this game with his own rules. 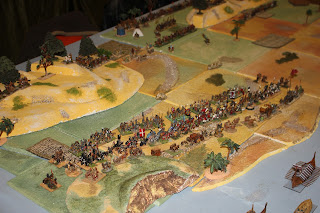 Anyhow, back to Phil's stuff. Here we see the Crusaders emerging from the defile, whilst the Moslems lurk on the hillsides. I took the Moslems, and Jed took the Crusaders. We started off with FoG, intending to rotate through other rules and never did. I have to say that FoG stood up really well. I think this was partly because neither of the players knew the system, so we relied on using tactics and getting the umpire to resolve the outcome, without relying on tactics based on the rules system. In fairness to FoG you do get a LOT of rules in the rule book, and it does cover pretty much anything you'd want to do in an open field battle. It fully justifies its size and weight. 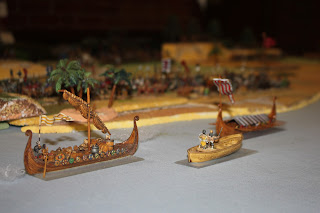 Oh, and we had ships. No one else did. If there'd been a prize for best medieval fleet we'd have won it. 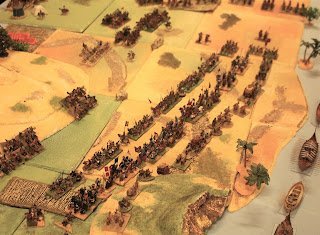 My plan, such as it was, was to draw the column out, by pinning the rear in place, whilst tempting the head forwards. I hoped this wuold open up gaps in the column and allow me to get in amongst the baggage eventually and also isolate and destroy individual Crusader units. 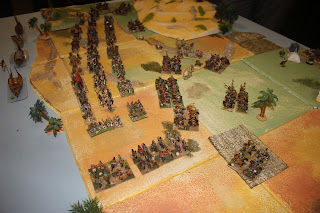 As I didn't set my army up I didn't have all the toys exactly where I wanted them. Units also got squeezed out as I closed on the column. I had the option to dismount, - which the Moslems did - but preferred to remain mounted to give me mobility. 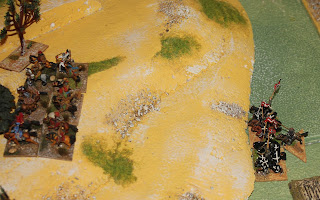 Here you can see my tactics working. My light horse on the left have evaded up the hill, drawing the Hospitallers in the rearguard out of position.

I had less luck with tempting the knights to charge than I expected. Firstly they mostly refused to charge impetuously into the various traps I laid and, secondly, when they did they mostly only made short charges (ie rolled for a shorter charge move on the variable charge mechanism) so stayed close to their supports. 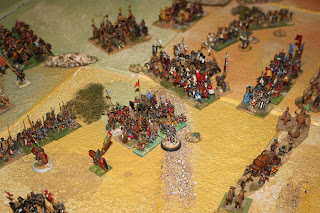 I finally pulled things about and managed to get a full bodied ghulam charge on a slightly wobbly infantry unit, which broke and allowed me to burst into the middle of the column. 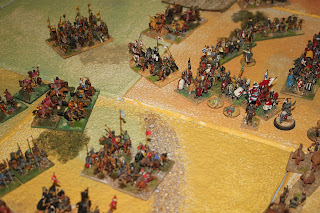 Unfortunately I hadn't managed to spread Jed's forces out enough, or tie the knights up in further futile charges uphill.That meant that there were some knights in the middle of the column able to take me on. 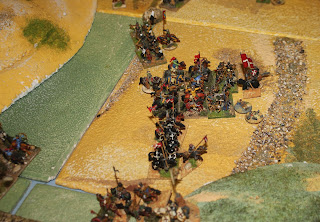 I then did the same to another foot unit with more ghulams, with similar success. Alas the pursuit move pushed me past a tempting exposed rear of some knights, at the same time exposing my rear to them. Curses. 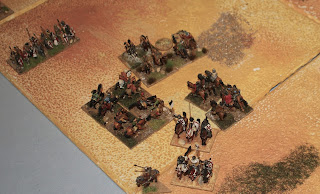 At the head of the column I finally drew out the leading knightly unit, surrounded it, shot it up a bit, then hit it front, rear, and flank with everything I had in the area. As you can see it ran away. 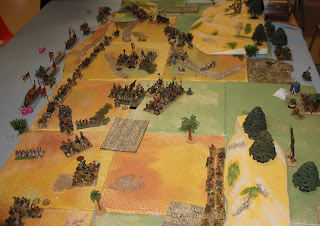 This long shot shows all sorts of shennanigans going on. I've got the knights in the middle embroiled with some ghulams and light horse, although this isn't going too well for me. It's tying up units tho'. I've got a few units heading for the hills at this point, but the Crusaders are going nowhere and are taking lots of damage. The gates of Arsuf seem a long way off. 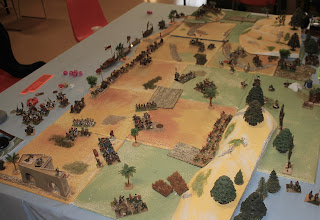 I've succeeded in drawing King Richard and his knights away from the gates of Arsuf - that's the column off centre left, they're about to be surrounded by light archers and shot to death. 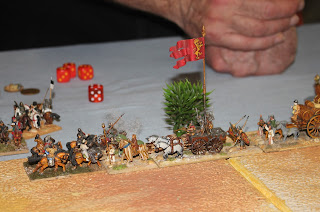 And whilst that was going on I slipped some ghulams round the side of the vanguard and got amongst the baggage. That's King Richard's standard about to be captured.

So a resounding win for the Saracens, although with heavy casualties. King Richard's military reputation is in shreds.

We never got round to swapping rules, so we'll do a Basic Impetus refight in Shedquarters. FoG did hold up well, but mainly because it was being used as an umpire tool.

On reflection this would have made an interesting scenario for a Science v Pluck variant, so if I'd got engaged with the project earlier on things may have been different.

Next year is Paraitacene, so as I've done that before I'll probably be there with all my plastics.

And for those of you who are interested we sold four copies of the Northampton 1460 game. So a good day all round.