So this year a bit of a change for the Bank Holiday Bash. Another big battle using the info in "Lost Battles" for sure, but this time using Basic Impetus.

The battle this time was one of the seismic clashes between two of the Successors; Eumenes & Antigonus at Paraitacene.

Regular visitors to this parish may well recall a posting in 2014 when we did this battle with AMW, using the Lost Battles deployment. So why revisit, you may ask? Well, this battle is the choice for the Society of Ancients' Battle Day next year and it seemed that it would be a shame if Basic Impetus was not represented. BI is, after all, rather popular as any visit to TMP will show you.

What's more I'd rather taken a liking to BI after my encounter over Arsuf and having spent my $4.95 on the download I'm keen to get value for money. Add to that the fact that any set of rules that claims to do the Ancient period really needs to work for Alexander and his Successors if it is to be taken seriously.

For this game I not only looked at Lost Battles but got hold of a translation of our only source for the battle, which is in Diodorous' history*, written 250 years after the event. On the positive side it's quite a long description, with lots of detail on numbers. On the down side the numbers don't add up and the account isn't completely coherent. Possibly this is down to copyist errors. Who can say? Also, there's only one source, so who is to say if it is complete rubbish or not as you can't verifiy the information.

Any how, there's enough information in there to have a stab at refighting the battle with a degree of coherence. For this game I took note of Sabin's remarks about the elite Eumenid foot being deployed in shallower formation to make up for the width of the Antigonid phalanx and used the BI depth formation rules for the other infantry. I ummed and ah'd about the amount of light infantry as well. In then end I just put out what looked reasonable and went with it.

For this game Will & Chris K took the Antigonids and Phil and new boy Gary the Eumenids. In the picture below the Eumenids are to the left.

One of the attractions of this game is the number of elephants, although if I'm going to go forward with this project I'll need to get in some Macedonian crewed beasties rather than rely upon Indians and Carthaginians. 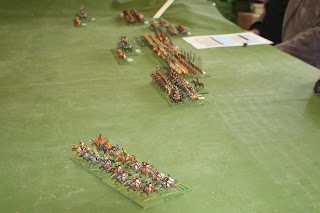 Chris had the Antigonid left wing and started by sending his light horse out wide, which is what happened historically. You'll see from the pictures that I've got the figures on temporary unit templates which have vital unit statistics and so on protruding from the rear. I thought this would help both me and the players not familiar with BI as well as mean units could be slid about more easily. 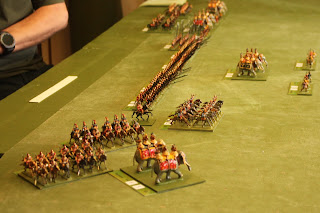 Chris's wide manoeuvre caused Phil to react by sending his heavy cavalry out wide to cover it. He moved his elephants from this wing in towards the centre to stop any gap opening up in his line. Elsewhere the two armies inched towards each other. The far end, by the hills, is a knotty problem for both sides with a lot of mounted troops and elephants hard up against the difficult ground. 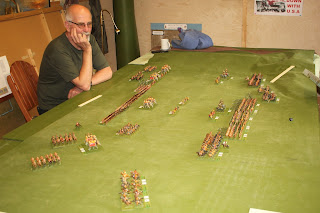 In fact it gave Gary much pause for thought. In the centre both sides have elephants and a bit of light infantry. They need to sort themselves out before the two phalanxes close up too much. 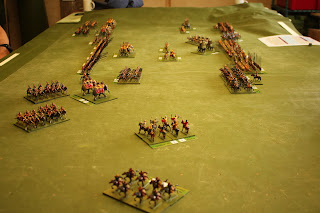 Chris split his light horse to try to get a two on one type situation with Phil's Agema. Phil, however, is our acknowledged expert with light horse and was alive to all of his tricks. 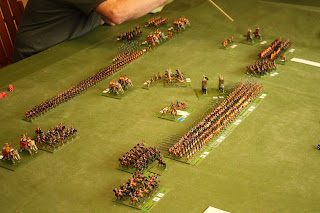 The light infantry in the middle has set to it, and Will has sent in some light horse  to clear out Gary's other such unit. I'm not sure what Will was planning with his elephants. At the top of the picture Gary is playing a waiting game. On the left of the Antigonid phalanx the issue of clearing out a unit of elephants when you only have medium cavalry is beginning to tax Chris. 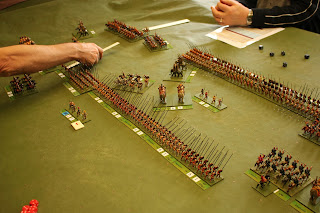 Gary finally gets moving on the Eumenid left wing, and it is getting close to decision time for the elephants in the centre. 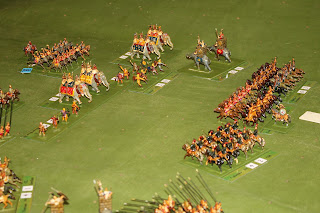 Out on the Eumenid left the skirmishers get stuck in to each other. Will is pondering how he can clear enough room with his quality cavalry to get involved with something they'd like to fight, rather than elephants. 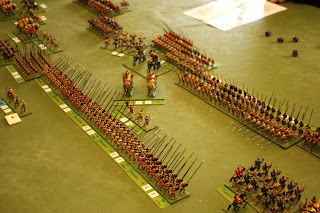 Will's got his light horse out of the way, and the elephants are starting to shape up in the centre. 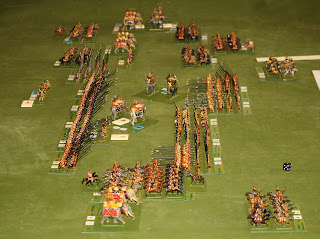 The first round of elephant combat sees Phil come off the worst, and he is bounced back. Unfortunately for Will he was unable to follow up and keep fighting. Right at the top the outer most elephants are giving it what for too. Note again that I'm using Rummikub tiles to show permanent loss to unit strength points. 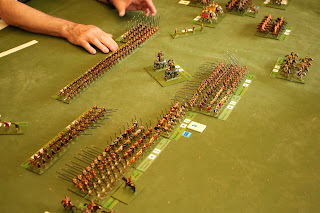 We skip a turn of fighting here, as you can see Phil's elephants in the centre have come to grief, although they did do a lot of damage to one of the deep units in the Antigonid phalanx, with it at half size now and with a permanent loss to strength points. 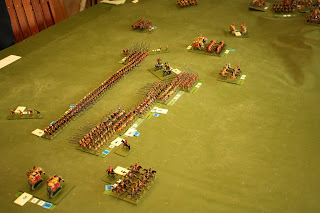 I've been a bit lax cataloguing what went on near me, but as you can see Phil has freed up an elephant unit and has it lined up on the end of the Antigonid phalanx. At the far end Gary won the elephant battle and Will's elite cavalry is starting to be dismantled quite brutally. 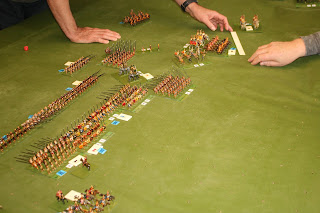 It's not looking good for the Antigonids, but as an almost last hurrah Will punches a gap in the phalanx with his last elephant unit, but he fails to follow up enough to get in a further round of combat which would have seriously embarrassed the Eumenids. 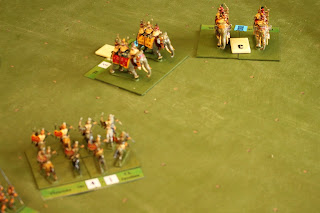 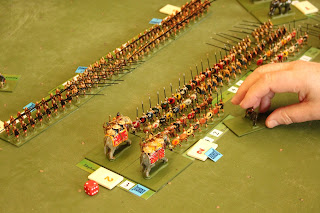 Been a while coming, but those elephants of Phil's start to crunch up the phalanx. 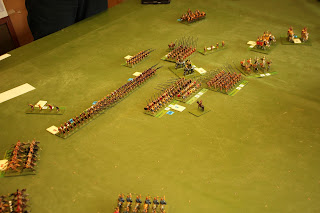 When they finally expire half the Antigonid army has gone. 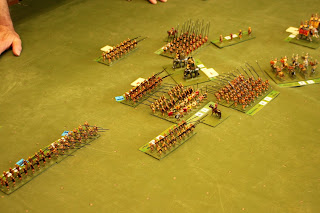 Will's last elephants are still trying to make a go of it, but they can't get round to the flank. 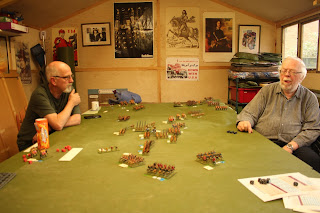 Pretty soon it is clear that there's no way back for Will & Chris, so I called an end to the game. That was about 3 1/2 hours, and was as long as it really should be to make it work. Three hours would be preferable.

Lessons learned? Need to look again at the deployment, for sure, and do some more research. It is hard to see how Antigonus can prevail on his right or keep his forces intact against what is lined up against him. As for the rules...well..they held up pretty well but:

1) The evade rules need a modification. Not too much, but you must be able to evade a flank charge if you are light horse at least.
2) Elephants are a bit dangerous. This isn't a battle won by elephants historically, and they made a real difference here.
3) The depth rules need to be played through again. We never got the phalanxes properly interlocked, so the jury is out on them (for the record Phil, who has played more BI that the rest of us, thinks they're rubbish).

The thing is I don't want to make too many changes, because if I do it stops being an attempt to fight Paraitacene with BI and just a bespoke set of rules.

On the positive side the game seems to have legs and gives me an excuse to buy more elephants and phalangites.

And Gary didn't run away screaming.


* Be warned if you try to do the same. Many copies of books both hard copy and Kindle supposedly being the complete works of Diodorus are no such thing. They normally do not include the fragments of the last books from about XVI onwards. As this battle is in book XIX that's a problem.
Posted by Trebian at 14:20