I was in need of some grey paint and some Persians and some paint brushes last week so I toddled off down to my local model shop. 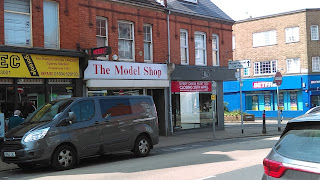 We're very lucky in Northampton (not something one often finds one's self saying) in that we have a proper, traditional, model shop. Very originally it is called "The Model Shop" and it is in the Wellingborough Road. It has been there as long as I've lived in Northampton, - over 30 years now - and according to their website, even longer. The chaps who run it are unchanged from when I first went in there, although admittedly greyer of hair. 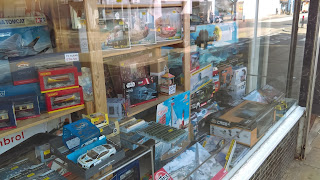 The window display is always fun, as you never know what they'll have tucked away in there. As you can tell they're mainly in to model railways and remote controlled aircraft, but their general plastic kit selection is pretty awesome for a high street shop. 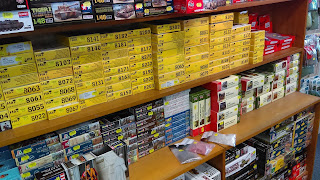 They're not too shabby on the plastic soldier front, either. They've always had a good spread of Hat figures (who buys these locally? Apart from me, I mean) and when Zvezda were really active in the 1/72nd market were good for those too. This display got me into ancient wargaming in the 1990s, when I went in there and stumbled upon the Hat Republican Roman and Carthaginian figures, followed shortly by the Macedonian and Persian ranges. If they hadn't stocked them I'd probably never have known and a lot of my wargamiong history would be different.

Needless to say they also have a good stock of acrylic paints (Tamiya) and the likes of copper tubing, balsa wood and so on.

So, in summary, it's great and long may it continue as it enters its 80th year of continuous operation. They do mail order, but alas most of the wargaming products aren't in the on-line shop.

Anyhow, if you're in the area you should pop in and support it, because it's great.