Back with some WSS

It's been quiet here as Mrs T & I have been away on holiday in New Zealand for the whole of March, and a bit more. Despite the jet lag I thought it was time to get back in the saddle, and re-visit my Marlburian rules, which are intended for COW this year.

Alas re-reading what I last wrote did not bring back a feeling of deja-vu, so this was a re-learning experience all round. 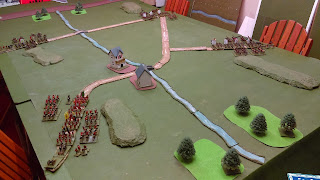 My players were to be Will & Phil, who both braved a wet and cold night to be with me. I put together an encounter battle, with even numbers of units aside. Will got the French (top right) and Phil the Anglo-Dutch. 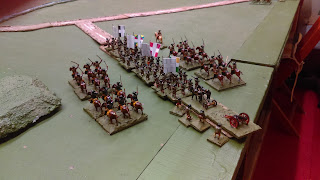 I've got some extra units on the way once I get my paintbrush back in hand, but this is the first time I've got the horse and foot units in the right proportions. This is a column of French, advancing towards the river/stream. 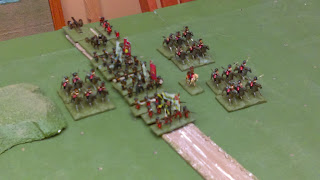 This is a small column of Dutch. 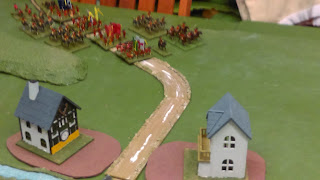 The "English" contingent marching on to the table. 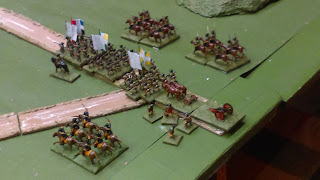 Finally the last column of French. Both sides took advantage of being in March Column to press forwards aggressively. The French are winning the initiative rolls, but it makes little difference at this stage. 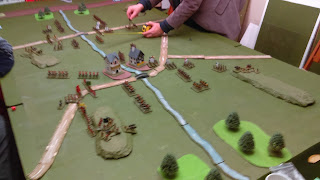 The cavalry is shaking out into line on both sides. A slip up here with the initiative could cause a lot of problems. 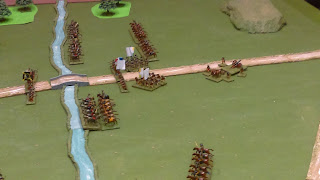 The infantry are getting ready to engage over the bridge at the far end of the table, whilst the cavalry shape up to each other. 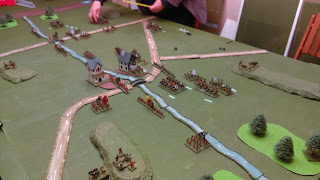 Near the village an epic cavalry engagement has started. The Anglo-Dutch have the upper hand, but only just. The buildings are being contested by infantry. 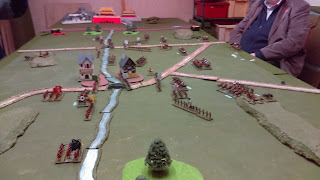 The French cavalry is having the worst of it, but the Anglo-Dutch are becoming tired and are too far away from their supports. 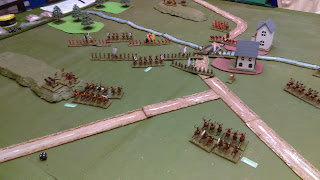 We had to stop with the game nicely poised. As we hadn't met up for a month or more our ratio of chat to game play was higher than normal.

Email ThisBlogThis!Share to TwitterShare to FacebookShare to Pinterest
Labels: War of the Spanish Succession, WSS