During our recent holiday in New Zealand we visited Wellington. Wellington has got two exhibitions commemorating New Zealand's contribution to the Great War. Both were organised by Peter Jackson and the Weta Workshops (if you don't know the latter did the costumes, scenery, visual effects, prosthetics and weapons for the Lord of the Rings).

Due to a timing error, - we stayed in Martinborough the night before and the drive to Wellington was interminable* - we were only able to visit one of them, and I chose the one at the National War Memorial, not the one in the national museum "Te Papa" for reasons you will see in this blog and probably the next.

Peter Jackson is a genius. I thought his achievement with LOTR was impressive before we went to NZ. If you then see how he made the films, and then what he has done with the influence he has gained you have to be impressed. His attention to detail is overwhelming, and he has a clear vision and knows how to tell a story.

One of the controversial things he did for theis exhibition ("The Great War Exhibition") was to take photographs from the IWM collection and have them "colourized". This caused a degree of outrage at the time, with the usual "dumbing down" and "pandering to the masses" type comments. As we all know the First World War was fought entirely in black and white.

Except for in the paintings of the war artists.

And we also tend to forget that in the early days of cinema  Georges Méliès had his films hand coloured, so this isn't actually unusual at all.

Anyhow, I was able to get some decent photos of some of the colourised pictures, and I've posted them below. I was really impressed, and I wish I had taken the time to get good shots of more of them, but then I really wanted to see...but more of that next time.

What do people think? 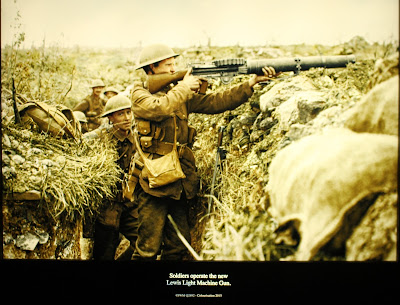 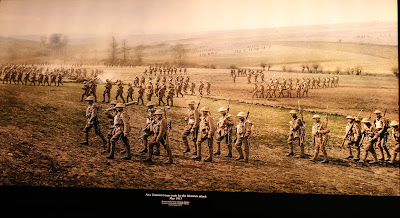 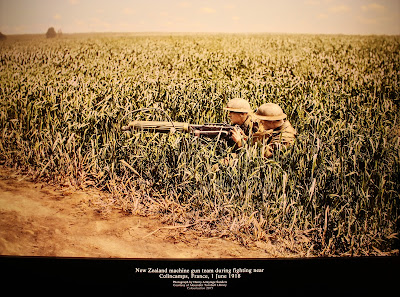 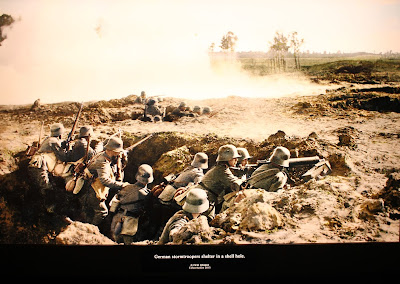 *The road is very twisty and goes across a mountain range. Apparently Wellingtonians love to go out for a Sunday drive on it, and people with camper vans can only manage about 10mph. What looks like a 40 minute drive on the map is closer to two hours. And we had a nightmare getting out of Martinborough as all the roads were closed for a sponsored walk round the local vineyards.
Posted by Trebian at 16:40