So next year the SOA Battleday is Telemon a Republican Romans v Celts battle. The Celt army included a goodly number of naked warriors, and I don't have any of them in my current collection. Just lots of Airfix Ancient Britons.

Luckily over the last few years a WD friend, Tim, has been off loading bags of his "I'll never get round to them" 20mm plastics on me. One of these included some Italeri Gauls. These are quite nice, and, despite having a limited number of poses, include at least one naked warrior. In addition some of the bare chested figures are wearing trousers that are quite tight, and with a bit of carving round the ankles and application of thick paint can easily be mistaken for men in a state of undress. 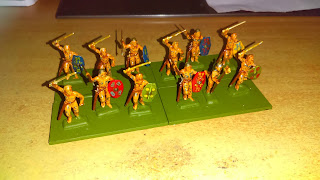 The carving is quite delicate on the figures, and they are really well done, - nicely proportioned in decent poses. The shields are separate, so you get added variety because you get two shield designs. The javelin men have had their plastic weapons replaced by pins as usual.

I picked up another couple of boxes of these in my haul from Hereward at Peterborough. That also included a set of Hat "Carthaginian Allies", which have amongst their numbers two naked Celt poses, so that added some more variety to the pile to be painted.

With all of that together I have another 5 units all undercoated and ready to paint. As these will now form my "Fast Warbands", being 3 figures on a 60mm x 30mm base. Hopefully that'll be enough for the refight.

With the advent of these units I will probably rebase a lot of my Ancients Brits to make them "Solid Warbands" with 4 figures on a 60mm x 20mm base. That should make some space in my "Celtic Warband" storage boxes.

Looks like I'm going to need another pot of flesh paint, however.
Posted by Trebian at 10:08