Getting all your mistakes in, in one go.

We've been talking about what's hot and what's not on the ancient rules scene, so naturally I put on a game of Armati. 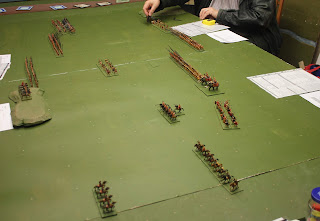 I chose two Successor armies, Antigonid and Early Seleucid (l-r above), but made some odd selections. I bumped up the light troops a lot, especially for the Antigonids, and gave them all the peltasts I had in the box. This might have been an error.

I rigged up a curtain for deployment. We started with Will & Tim as Seleuceus, whilst Richard & I took old One Eye. When we took the curtain down we had managed to deploy with neither wing facing the other. Oh well.

I had a sort of plan when I picked the armies for both of them. I had a senior moment when deploying, and got it completely wrong. I really don't know what I was doing. Richard, who had never played the system, made some suggestions which I should have said no to, quite forcibly, but I didn't. Consequently the game was pretty much lost before we started. (We should have had all the heavy cavalry as individual divisions, with the phalanx as one, and then put the light infantry out on the flanks to support the cavalry). 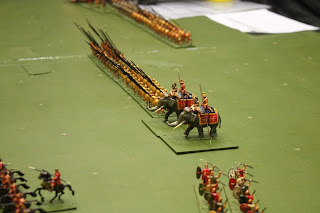 The Seleucids had elephants. I over compensated in my fear of them. Any how, by this time I was off the hook, as Chris had turned up and took over my wing. 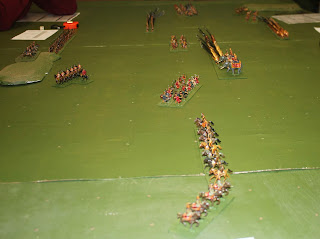 He held his heavy cavalry on the hill, and sent his light horse out wide. We were out numbered in light horse, but Chris got himself into a position where only one of them could shoot at him. 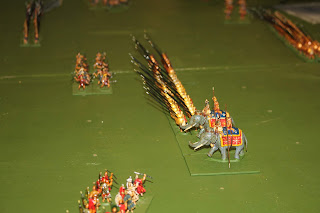 Richard and Chris also taunted the phalanx with a light division. They got some hits early doors... 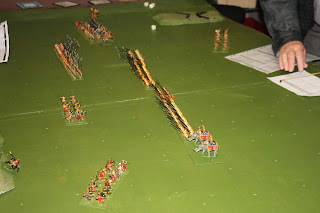 ...but then had to evade out of the way. 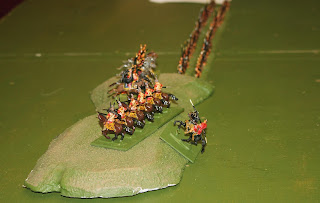 Seleuceus lead his Companions up the hill and started to trash the Antigonid heavy cavalry. 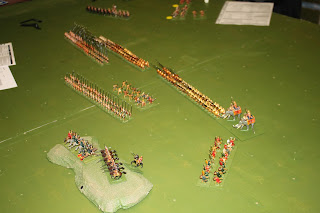 As the phalanxes approach Tim has got his peltasts in a good position. That pesky elephant, however, is just out of the way of everything and wasn't worth worrying about. 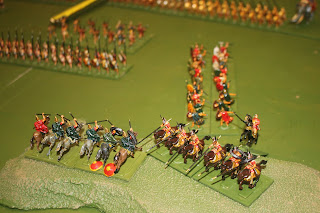 Another round of melee lost. Chris had gone by now, and I was back behind the right wing, with Phil umpiring. 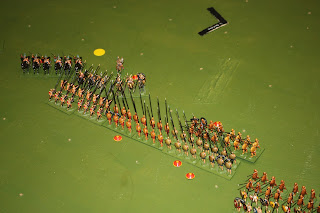 Things did seem to be looking up for us. After some fiddling about Richard managed to get his cavalry into the back of Will's phalanx, breaking some phalangites. Alas, this was a false dawn. The size of the cavalry unit and the angle it had come in at meant it would find it hard to perform a similar trick on another unit. 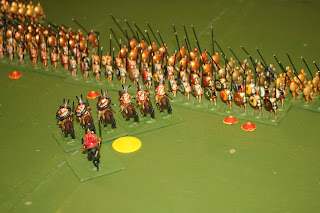 No so Tim. After skewering our cavalry he's into the back of our hoplites. 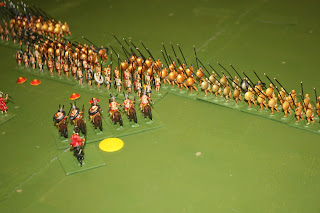 Not just once, but twice. 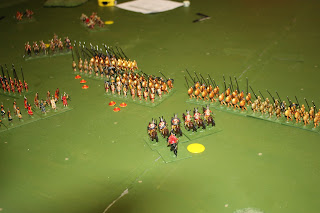 Not my finest moment. The Antigonid list has problems, - its troops are generally less good than the Seleucids, and there are things you can't have. To compound it all I made a number of bad decisions when putting it together, then screwed up the deployment and then the battle plan. So, stunning performance all round really.

Any how, now Tim & Richard have been introduced to the rules, maybe it'll go better next time.
Posted by Trebian at 14:27