Nearly everyone else was busy on Tuesday. A combination of work and pre-Christmas events meant we were in single figures (i..e just me). As some of the cancellations were last minute and unexpected I had a full table of lead, so instead of just putting it all away I resorted to pushing around a few Pacific War units on my own. And trying out the camera in my new phone. 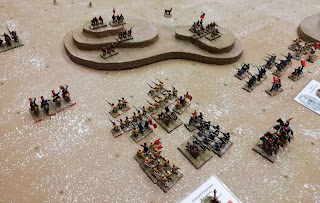 I'd set up a full scale invasion by the Peruvian/Bolivian Alliance. The Chileans were spread out over a series of hill lines. The Alliance was forced to adopt firing lines early on in order to make headway, whilst they dragged up the Gatling guns. 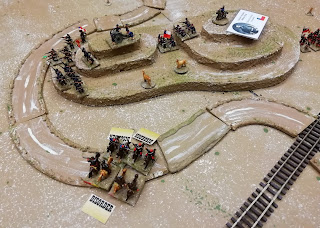 In the centre of the board the Bolivian horse had pushed forwards and was involved in a long rambling cavalry melee. There was quite a bit of too-ing and fro-ing, and something happened that I hadn't seen before, so I had to pop in a quick rule amendment. 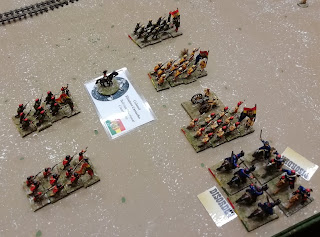 The Bolivian Infantry Division hurried ahead, trusting to their cavalry to keep their flanks safe. 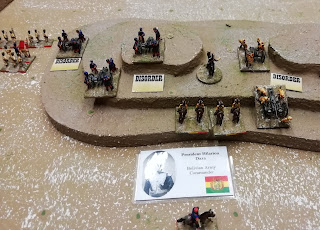 Meanwhile at the back, President Diaz was supervising the artillery being hauled up to the top of the ridge line. 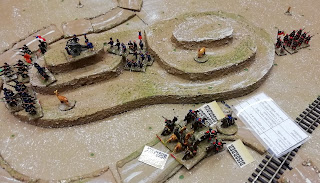 The Chilean divisional commander had to gallop to the aid of his cavalry in the centre, who were taking a beating. Gave some thought to an officer casualty mechanism, and consulted my source books. It was quite rare amongst senior officers, even those who were active, unless they got cornered and were forced to fight to the last man. 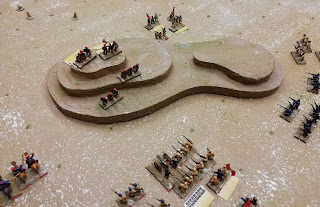 The alliance had finally made progress against the Chileans on the first hill, having deployed everything they had and shot them off the hill line. I have tweaked the rules here too. 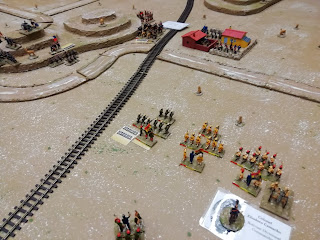 As the Bolivian infantry approached the farmstead they were greeted with heavy fire from the Gatling gun in the courtyard and were forced to deploy.

I stopped about there, very pleased with the developments I'd identified and satisfied with the new camera's performance. Besides it was getting quite cold without any more warm bodies to heat the place up.

Next week some fun Christmassy games. Perhaps.
Posted by Trebian at 16:50