A Tale of Derring-Do amongst the Bolsheviks

For the second game of the year MNG-r Richard brought along his 28mm Russian Civil War figures and his set of the "Triumph & Tragedy" Pulp Era wargames rules. We were a bit thin on the ground, so he had me running the Reds on my own, and Tim playing the Whites. 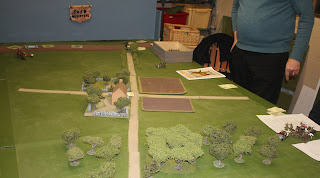 This was a scenario based around the supposed escape of the Princess Anastasia following the assassination of the Romanovs. She's holed up in the house with some Red Guards and some Austrian POWs who have switched to the Reds, having mistaken them for Germans. A British secret agent ("Algy") has just landed in a plane, top left, to attempt a rescue. It is early dawn. 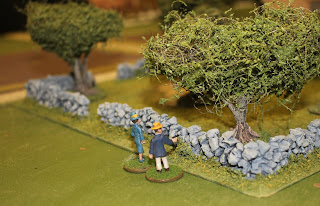 Algy and the attractive lady pilot/love interest sneak up to the wall surrounding the house where the supposed Princess is supposedly seeking safety. 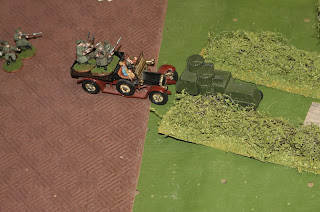 Meanwhile Commissar Ivanov (that's me) is arriving to take charge of the situation. 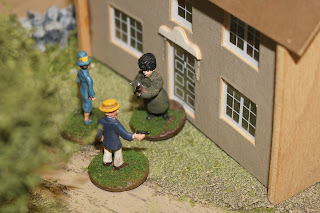 Algy tries to bluff his way into the house, but despite speaking fluent Russian, fails his "Con Artist" roll spectacularly by rolling a 3. 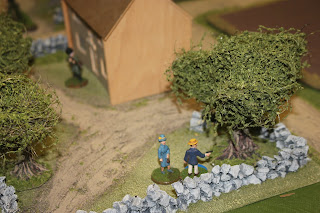 Algy and his friend flee, as the guard snaps off a rifle shot. He misses. 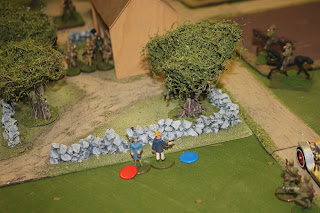 The Austrian artillery crews however have grabbed their side arms and let off a fusillade of shots, wounding the pilot. 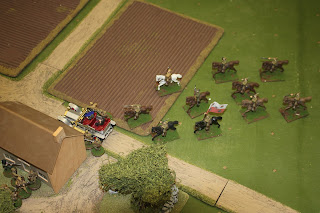 Help is arriving. The British Naval Attache arrives in his car, just as some Czech Legion cavalry emerge from the woods. 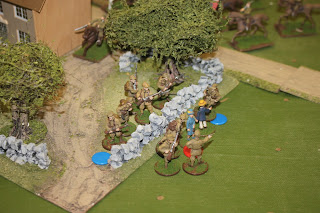 The Austrians rush Algy's hiding place and try to capture him. 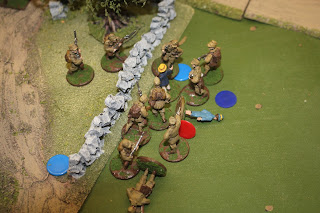 Algy is having none of it, and puts up a stiff resistance. Alas for him, the pilot is killed. 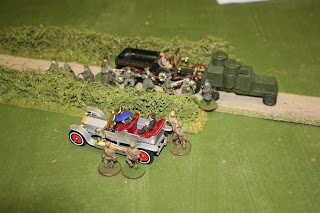 Having seen my armoured car, Tim decided to ram it with his Rolls Royce, but bottled it at the last minute as I peppered it with the two MGs on the Austin-Putilov. 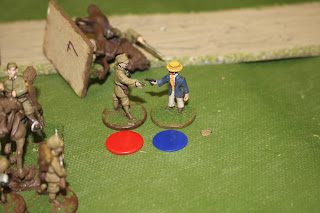 Algy is rescued by the Czechs, but he ends up in a face off against the Austrian's officer. 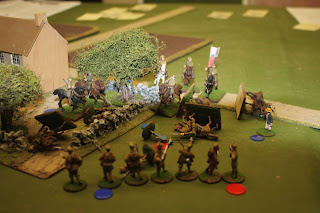 The Austrians drop back and form as firing line to keep off the cavalry. 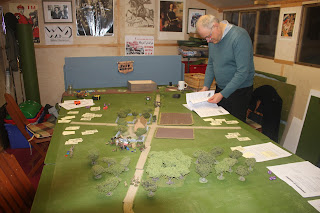 It's getting tense, so Richard takes refuge in consulting the rules. 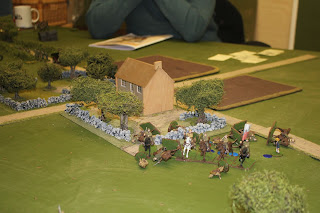 The Austrians are charged down by the Czechs, but elsewhere the house is still secure, and the Rolls Royce and its occupants  have been comprehensively shot up. With the pilot dead, and the Roller in pieces, there's no way for the Whites to escape with the "Princess", even if they could have got her out of the house. A Red win.

This is the first time I've played "Triumph and Tragedy", and it handled most of what we wanted to do okay. I'm never convinced by things like "fast talk" or "con man" rolls, and would rather use something like a matrix game resolution mechanism. In any event, in this type of game the scenario is the key thing, and it would have been a different game with another two players.

Still, we all enjoyed ourselves, and I expect to see these fellows back again on another Tuesday evening.