Battle of Marathon, 490BC

I slipped in a big AMW refight this weekend to start the New Year. I went for Marathon, as I've been painting a load of hoplites recently.

I tweaked the rules a bit as AMW played straight with Greeks and Persians is pretty futile for the Persians. I upgraded all of the infantry in the centre of the Persian line to Auxiliary infantry in defence, and I also created a "half unit" rule for the Greek centre. The hoplites there are deployed in units of two elements, as Herodotus tells us that the Athenians thinned the centre of the line. Most refights I've seen deal with this by doubling the depth of the wings. That's okay as far as it goes, but isn't what Herodotus tells us happened. By halving the size of the units I hoped to increase the chance of a Persian breakthrough in the centre. I also let the heavy bow armed cavalry move and shoot, as stopping them from doing so is silly. We are also playing the automatic morale roll for single base units as well to reduce zombie melees slowing the game down.

The army sizes were 14 hoplite units for the Athenians, and 16 units for the Persians. The Persians had a couple of cavalry units, two Ionian hoplite units and the rest as heavy archers. Most refights add in a load of light infantry, as per standard army lists, but I decided that as they weren't in the source material they would be a distraction. Phil Sabin uses a similar OOB in "Lost Battles". 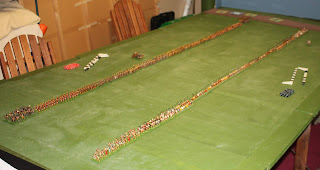 The Greeks are to the right, the Persians to the left. 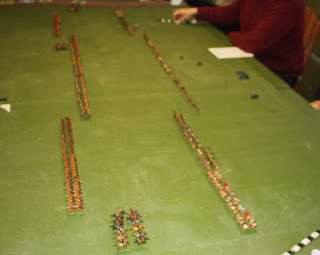 Richard and Will took the Greeks, and I ran the Persians with Tim. Controversially the Greek commanders decided to refuse the centre, and press on the flanks. We rose to the challenge, and advanced our centre. Our wings stayed static, except for the horse which we pushed forwards to engage the enemy with archery. This had mixed results. Tim, at the far end of the board was more successful, mainly as Richard couldn't make a saving roll to save his life. 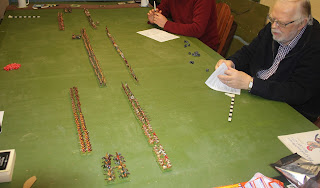 We're now within bow range all along the line, so we halt and let fly. The results are good for Tim, as Richard is still helping out with a healthy diet of ones. 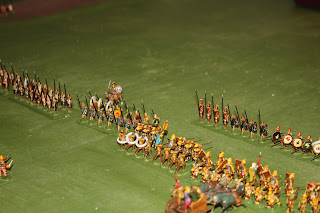 Richard angled in one of his flank units to hit the end of our centre block, but the Immortals gave as good as they got. 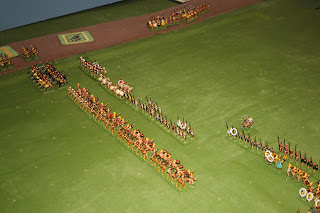 Morale rolls thinned both of the units in melee. Tim's archery had also knocked a base off ALL of the flanking hoplite units, which is impressive as he should have inflicted a maximum of three per unit, - i.e. one short of removing a base. This damage weakens the hoplites a lot, - reducing their offensive capability, and making them more vulnerable to attack. They're still tough, but this is very positive (my, unphotographed, wing is going less well). 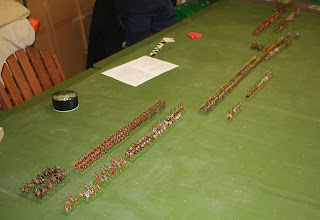 As you can see, from this picture taken from behind the Greeks, apart from the unit facing the cavalry everyone is intact. Some of the units are carrying a hit or two, but obviously those facing my Ionian Hoplites aren't being shot at. 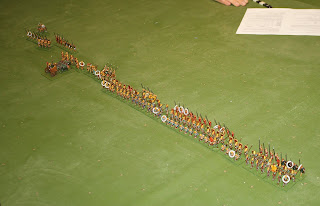 The centre finally engages. We have shot away a base or two, but the left hand end is looking vulnerable.

The left hand end of the Greek centre has broken open (so that rule change worked) and our Immortals are trying to exploit the gaps. On the left end of the picture you can see that Richard turning in his hoplites earlier on has created a two on one attack for us. 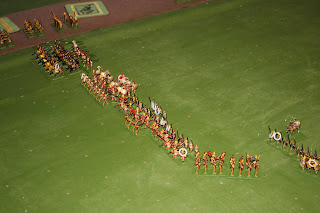 Elsewhere out on the left flank we're doing rather well (note this is now "us" not "Tim" as my flank is going badly. Just me stealing some of the glory). The cavalry are gaining the upper hand against their opponents, and the heavy archers are hanging in there and chipping bits off the hoplites. 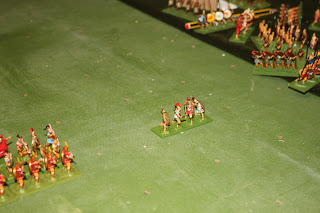 On my wing my cavalry has been destroyed, although Will has taken a few hits(!) on the hoplite unit that did for them. 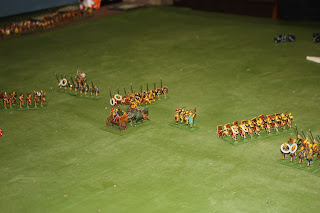 Back to the left, where Tim has punched open a big hole.

Shame his general got killed the next turn. There he is, gone.

My wing, meanwhile, is being steadily enveloped and overwhelmed. 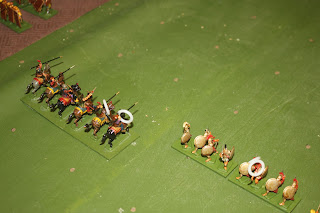 Tim has a breakthrough on the left... 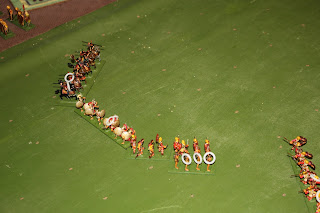 ...and turns in on the Athenian right.

We stopped at this point. We had broken the Greek centre, and were winning the centre, but my wing had been destroyed. To get a full resolution we need another hour, probably, but we had fought each other to a standstill. That's a really good result for the Persians.

AMW continues to provide us with a good deal of entertainment, but there are issues closing a game out when we use it with lots of units. Still, it did its job kicking off the new year of wargaming with lots of toys on the table, and everyone having a good idea of what was going on.