Following on from the 28mm skirmish last week we were back in the USSR for some more Red/White action. As this game was held on the day of the first snowfall of 2019 I was concerned that I might be down a bit on numbers. However we had a good turnout, with Tim, Richard & Dave all showing up. I was pleased to reflect at this point that these were all people I was not wargaming with 12 months a go, so it only goes to prove that wargaming is a social hobby where you meet real people. 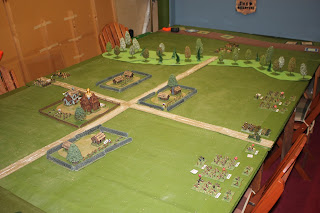 So this game is a return to my last set of RCW rules "Return to the River Don". These started out as a bit of a mashup based on Peter Pig's ACW rules, but it slowly morphed into having its own character. Notable changes from the set posted on the blog, top right, include a complete re-write of the melee rules (now much more streamlined) and simplifications to the command rules and morale suggested by Mark Grindlay and Peter Clarke of the Phoenix Club, who used the rules for their 1920 Polish campaign.

For the evening's entertainment we had a prosperous village (new buildings courtesy of Bob Cordery) defended by a Regiment of White Infantry, a Brigade of Cavalry and a battery of guns. The Reds were aiming to liberate it with two Regiments, an armoured car, a battery of guns, and possibly some cavalry. 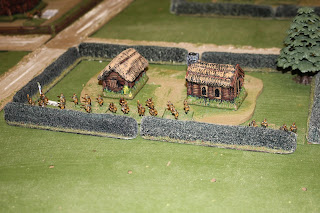 Tim took the Whites. Here's a battalion lining the edge of a built up area. 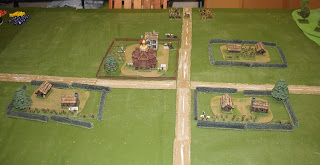 This is the overall layout for the village. The Whites have cunningly placed an artillery spotter in the church tower. 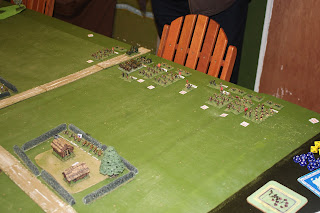 The Reds shifted all their troops to the left to attack the White right flank with their full power, whilst pinning their left with a feint attack. 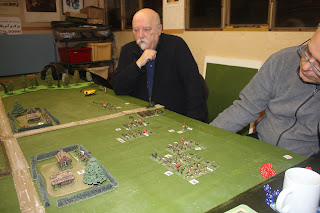 Richard had the "left left" and Dave the centre left. It's turn one, and everyone is obeying their orders nicely. See all the "Da!" markers on the table. 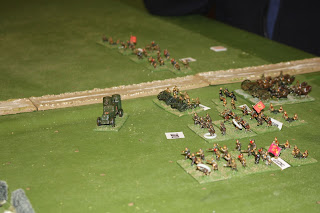 The armoured car veers off the road to support the attack. 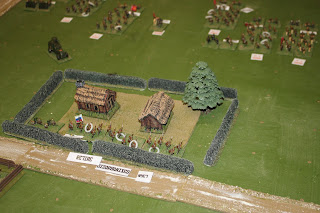 The defenders of the farmstead have taken some casualties, and drop back having failed a morale check (I should not at this point that Tim had some very bad luck with his command rolls) 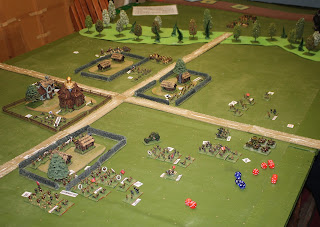 The Red commanders drive their men forwards.You can just see the odd "Coercion" marker appear behind units, as the Commissars give them a talking to. In the distance the White Cavalry has been sent off on a wide flanking manoeuvre. Will they get there in time to make a decisive intervention? 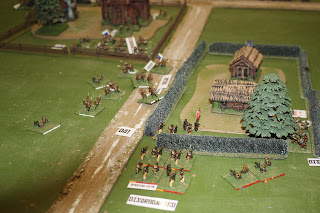 Richard's Naval battalion turned the flank of the Whites who had retreated previously, and routed them. 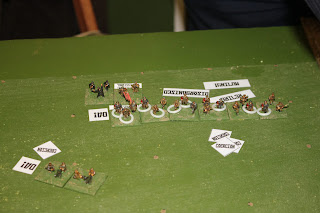 Dave was having less good luck. In an attempt to drive his infantry forwards he got into a bit of a "Coercion spiral", and his troops ended up refusing to advance (note the Mutiny marker at the back of the board). The chaos resulted in some shootings taking place. In addition Dave's clever plan to deploy his MGs separately and shoot up the farm prior to reserving fire against a potential cavalry attack came a bit unstuck, and the unit never got the order to reserve fire. 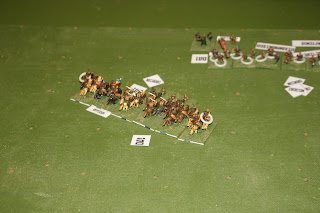 By this time Tim had gone home, so I took over the Whites, and was able to launch a devastating cavalry charge. The Machine Gunners fled. 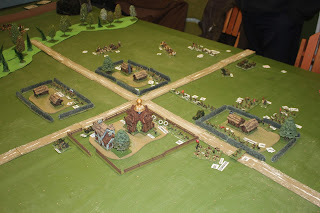 Despite my success with the cavalry, Richard's Naval Battalion were lining up the defenders of the church compound for another flank attack. Elsewhere Dave was pressing forwards to keep the Whites in place so Richard could administer the coup de grace. 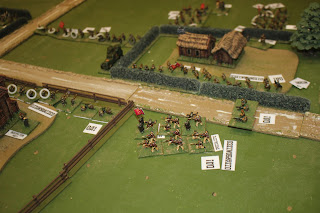 And that was about it. The cavalry was too far away to interfere, and aren't really suitable to counter attack built up areas anyway. Win for the Reds, and they didn't even get their cavalry on.

Everyone said they enjoyed the game, and that they liked the rules. The game is really all about the command and control and the combat mechanisms are secondary. The challenge is to make units actually do something in the order you want them to, and that seems to occupy the players satisfactorily.

As ever there are some changes that need to be made. I was a bit slow on running the game as it has been quite a few years since these boys were out. The firing system has problems that weren't evident in the game, but there are loop holes that can be exploited, so they need a rethink.

But an appropriate way to spend a chilly evening, I think.