I've summoned up the courage to have a go at the Jacobites. Before I do, however, I really must point you at this blog, which I found when looking for finished pictures of Strelets figures: link. Rod McArthur is a man after my own heart (although, in truth, he got there first). He only collects 1/72nd plastics, which he converts into anything he needs, and he has the most brilliant spreadsheets for planning his painting schedule, complete with GANTT charts. Hats off to him. Hopefully I will find a way of meeting up with him at some point.

Anyway, suitably inspired I set about my first Rebel units. I settled on doing the Royal Ecossois (no tartan there) and a generic unit of Highlanders.

Which had a lot of tartan. This is going to take forever, if this unit is any thing to go by.

For the Royal Ecossois, who were raised and equipped in France, I used some figures intended for Lowland Militia in the " Militia & Loyalist" box from Redbox. There's a bit of flash on them, but they are fine figures with nice detail. The officer is obviously intended to be some Edinburgh big wig (literally) and he has lovely facial detail, including glasses perched on the end of his nose. 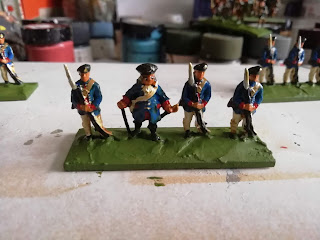 I note that Rod M has taken the same view on the REs, so I'm in good company. Some illustrations have them in tricorns, but I rather like the bonnets.

The other units is a mixed bag of Redbox figures from the "Militia & Loyalist" box and some from each of the Strelets Jacobite boxes. 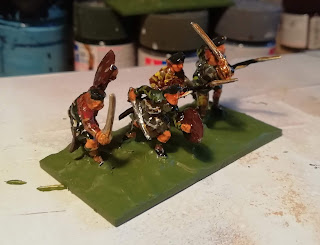 You'll note that I've gone for deeper bases, and I'm using 5 figures per element as well. I wanted to show a mix of firearms and melee weapons, and also get a sort of "two ranks" effect, without doubling up the number of bases. Jury's still out, but I'm coming round to thinking it works. 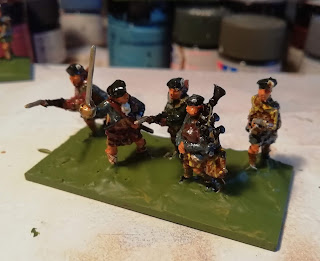 Here's a command stand with a piper. Again the Redbox figures have some lovely detail. Shame about the flash you get with them. The Strelets are a bit more rough and ready, but they're certainly animated as you can see from below. 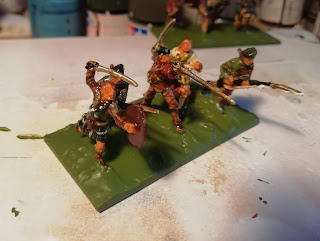 I even have a man in trews in this lot.

The tartan is looking okay, but it is increasing the painting time a lot. Can't see a way round the problem alas.

This is going to keep me busy until summer, I think.