Up on the Altiplano

I thought we hadn't done the 10 Cent War for ages, but it turns out we did a game back in December. Steve was the only one who remembered.

Anyway, Tim hadn't seen the toys, so it was no loss getting them out. Plus I made a few changes after that last game, which had only seen solo play-testing, so we needed to have another go.

I spent most of the day painting half of the outside of Shedquarters. The weather hasn't been kind to it, and two of the sides get a lot of weathering, - they take the full force of the sun, and also seem to get the prevailing wind & rain, so some running repairs were required, together with several coats of shed paint. And more to follow.

Anyway, that's my excuse for not really doing any detailed scenario work. Again. 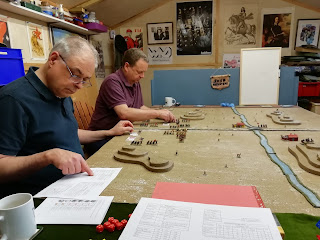 Richard and Steve had the Bolivian Division and Peruvians respectively. The Army Commander was President Diaz. Tim got the Chileans. For this game all units were the same quality, and everyone had rifles. 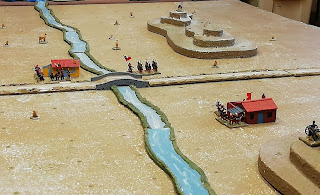 The defending Chileans were a bit spread out, but had two strongholds, one each in a hacienda. 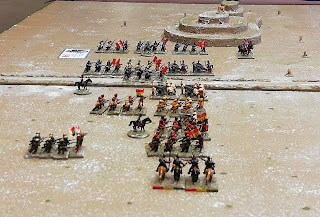 The Alliance forces surged forwards. The  Bolivian cavalry decided to re-deploy, and so turned to their left, exposing their flank.The subsequent flanking fire from the Chilean battery on the hill crest (out of shot) was devastating.NB Photos for this game were taken with my phone, so are a bit iffy in places. 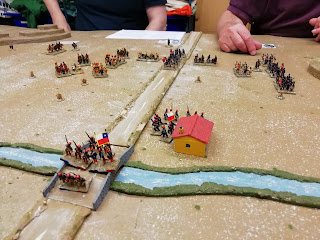 Tim moved a unit up to the bridge and secured it by deploying in a firing line. For this game the river was simply a stream and not much of an obstacle. 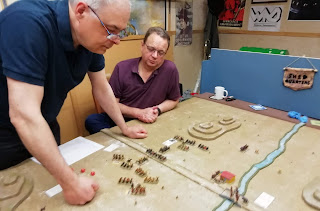 Richard is getting a bit intense at this point. He has everything zeroing on the bridge and yellow hacienda, but he is concerned about the artillery fire from the Chileans. And how he gets to use all of his stuff without masking his guns. 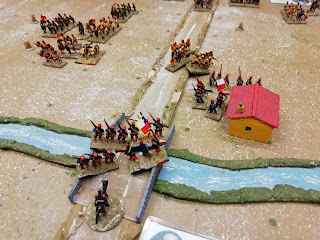 The lead Alliance unit nears the hacienda. The defenders inflict some damage and drive them back. 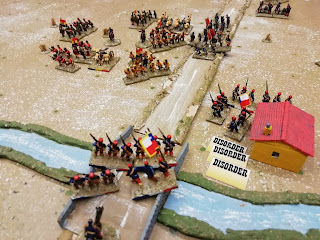 For their impudence Richard and Steve turn everything they've got on the building, inflicting multiple levels of disorder. 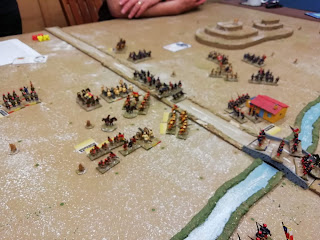 Tim has moved a battalion up to the river line (you can see their red kepis, bottom right), so Richard diverts a unit to deal with them. He has high hopes for his Gatling gun battery. 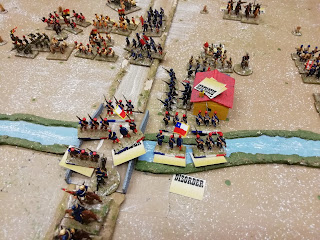 Skip forward a turn or two. The bridge defenders are under heavy fire, and the defenders of the yellow house have been evicted. This latter event was not completely satisfactory, and there needs to be a fresh look at the combat result rules, as I think the outcomes for those in buildings should probably be different from those in the open.

You can see at the bottom of the picture that the Chilean cavalry is rapidly moving over to their left flank to cope with a Peruvian flanking movement. 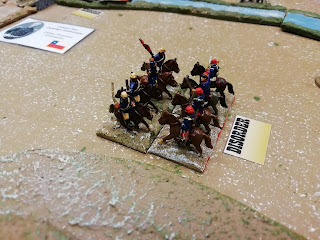 Not a moment too soon. Their timely intervention drives the Peruvians back in disorder. 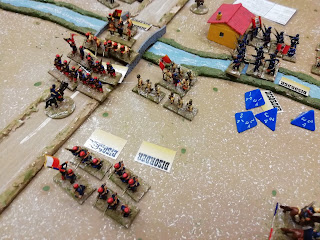 The previously defeated defenders are caught in the flank by a Peruvian attack column wading up the river. They roll an impressive total of 16 on 4d4, and break the hapless Chileans. The bridge defenders are likewise being driven off their position, handing a victory to the Alliance.

To be fair the Chileans were up against it, outnumbered 2:1 with not that strong a defensive position. The presence of more command figures on the side of the Alliance also made a real difference.

I made some notes as we went along, and there are some more rule changes to be made, - aren't there always?