Naval Gazing in the Pacific

After my recent fretting about publications, let's get back to some wargaming. Well, not entirely. I thought I'd better have a look at my Pacific War naval stuff and see if it is in a fit state to put in a set of rules.

I set up a simple encounter battle, with two ironclads aside, supported by some wooden gunboats. 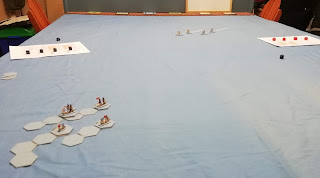 Richard had the Chileans in the distance, and Tim had the Peruvians, including the famous Huascar, which was an ocean going monitor that looks like a trawler. The dice on the sheets of paper are used to record the speed the ships are moving at. 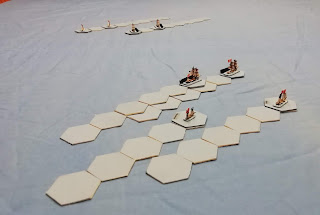 The two flotillas steamed towards each other warily. Actually, that's not true. They steamed at full speed, and opened fire as soon as they were in range. The firing is indicated by the pieces of black pipe-cleaner. 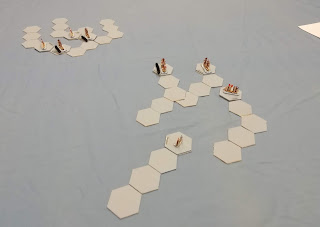 The flotillas turned towards each other. Tim has caused his wooden vessels to hang back a little. Ineffectual fire continues to be exchanged. 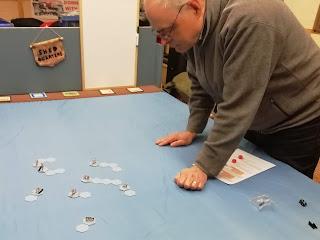 As the ships close with each other, Richard gives the position careful consideration. He is trying to turn his ironclads so he can make use of both broadsides in a turn, something he achieves with considerable skill.. 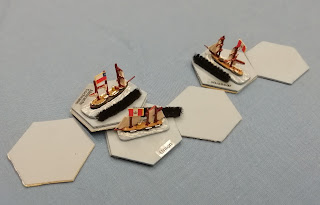 After more manoeuvring the Peruvians have managed to get two to one on one of the Chilean ironclads. Alas one of the two is the tiny, wooden, Union, which is lucky to escape with only minor damage. The Huascar misses again. I assure Tim that should he ever get a hit with her massive guns the damage will be considerable. 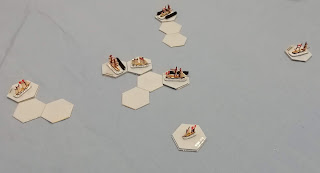 The Huascar finally hits something and gives the Abtao a shock. Alas for Tim I was wrong and the damage is minimal. 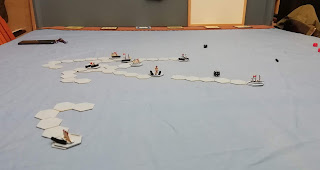 This is a move or two later, and I've lost track of exactly what happened. The Peruvians have taken some minor damage, but the Almirante Cochrane has a busted rudder that can't be fixed, and is destined to sail away in a straight line. The Abtao is badly damaged and is limping out of the fight, its Captain killed by small arms fire from the Independencia. The Chileans have been given a bloody nose, and are retiring from the field.

Neither player had played the system before, which was written by Ian Drury, before being modified by me to get rid of the hexes and add in small arms fire. It is quite hard to hit ships in the system (which is about right) and damage is unpredictable (which is also about right), so it has that going for it.

I need to go back to the sources and have another think, however. I reckon I want to put this on a square grid and use the 2 points straight, 3 points diagonal  system from "Fighting Sail". I also want to introduce a steamship telegraph to the ship control sheets, with "Full Speed/Half Speed" etc on them. If I do that I have some other issues to attend with, such as what about ships that move at different full speeds, and how my card driven phased movement sequence will work.

I'm not a fan of ship hit points, either, which is a Naval warfare standard. For these vessels they rarely, it seems to me, degrade slowly then sink. Critical hits are what it is all about, which includes holing the ship below the waterline, so I might look at that too.

As I said above, it is quite hard for ships to hit and damage each other which is realistic. The question is whether it is fun or not. RFCM's "Hammerin' Iron" is not at all realistic in this area, but the game is fun. It is much easier to inflict damage than it should be, which is quite satisfying when you are firing.

Having said that, the scenario above took about 2 1/2 hours, part of which was because I set the ships up too far apart. The game probably needs to start just outside maximum gun range. If I'd done that we'd have all been firing a bit earlier and been done in closer to 2 hours, which would be about ideal.

As ever, some things to think about.