Tanks for putting that game on

After a very pleasant meal in the Coach and Horses it was back for a bit of Lardy armour action with "What a Tanker!". 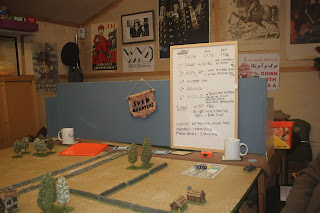 "WAT" has this mechanism that has you rolling dice then using them to perform actions based on the numbers you roll. It's a nice little mechanism, although what it has to do with driving a tank in the real world is debatable. In wrote the key facts up on my white board. 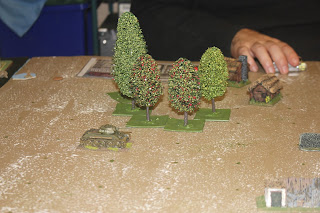 Richard set up a two v two game on the Eastern Front. Chris had a T34 and I had a BT-7. Phil got a Panzer IV and Richard a Panzer III. Looking at the stats I think I might have been a little hard done by. 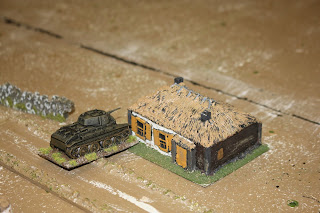 I drove off quickly and hid my tank, which was apparently made of cardboard, behind a house. 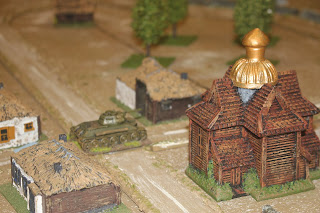 Chris drove up and dominated the cross roads. 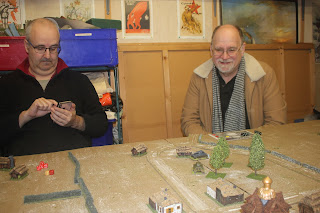 He then saw an opportunity to close with Phil's tank and give it to him at close range from the side. He did a bit of damage to the tracks, and texted someone about it. There's an odd mechanism here. You get temporary and critical hits. If you roll more citicals than temporarys you inflict permanent damage. If they're equal or the other way round you don't. So you are sort of better off inflicting one critical and no temporarys than one critical and one or two temporarys. There's probably a game balance reason for this, but it is a bit odd on the face of it. 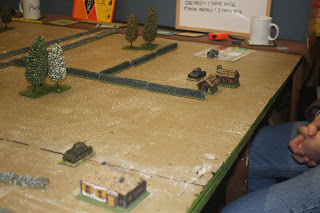 As Richard approached, I leapt forwards from my cover, blazing away. 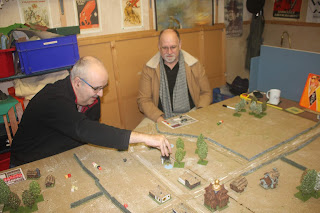 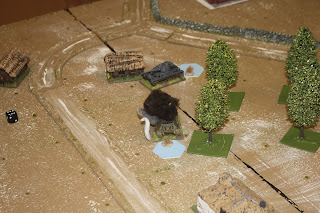 Phil contemptuously turned his turret and let fly, brewing Chris' tank. The blue hexes are used to denote where the turret is facing, as Richard had glued his turrets in place. 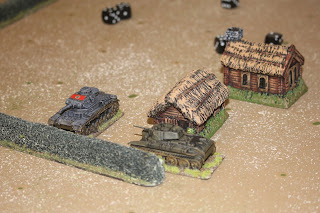 I sneaked round the side and fired close up. I might have done some minor damage. 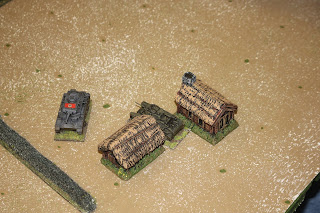 We now chased each other round the buildings... 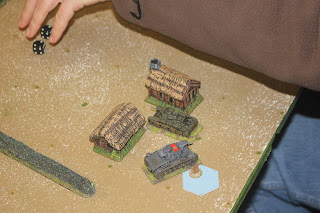 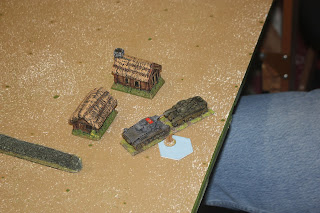 In the end I got fed up with the manoeuvring and just drove up close and fired away. I missed. So did Richard. 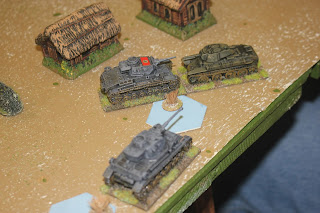 Phil drove up. And missed as well.

It was all looking a bit silly by now, probably due to some bad luck. And then we stopped because it looked like no one was going to die and it was getting late.

Right. This is a simple game, and supposed to be a bit of fun. It is also recommended to play with the campaign/career structure rules, which obviously we didn't use in one game at the end of an evening.

I want to like the TFL guys' stuff, as their hearts seem to be in the right place, but this is mutton headed stupid. The reviews say it gives you fun but with hard tactical decisions. No it doesn't. You roll the dice and if you don't get the right dice you can't aim your gun or spot your target. Or drive your tank. What decisions are you taking if you roll 6 dice and can't use at least 4 of them, as often happened in our game? The production standards of the rules are excellent, but at £25 it seems a bit steep for 72 pages*. Crumbs, the pdf is £16. Still, people are buying them, so what do I know?

It's probably unfair to judge on one play, but honestly I had a paper thin tank and there were two tanks with serious guns blazing at me at short range and I wasn't even touched. Everyone else who has written about them on the interweb says they're fun, but I get the feeling they might be TFL fanboys, so perhaps they've already bought into the whole TFL milieu, something I haven't (I didn't get "Sharpe Practice" either).

To be fair we need to try it again, with the aim of running the campaign in an afternoon type thing, and work our way up through the different types of tank.

But whatever my concerns and its limitations it is always a good day when you spend it wargaming with friends, so no downside to playing it really. I just won't be buying a copy anytime soon.


*Having said that I'm working on a 60 -70 page rule book I expect to be in colour. I might have a different perspective when I've done and priced it.

Email ThisBlogThis!Share to TwitterShare to FacebookShare to Pinterest
Labels: Too Fat Lardies, wargaming, What a Tanker, WW2