What's a Chap to Do?

So, back from holiday and Tuesday evening came round so the Monday Night Group should have been assembling in Shedquarters for our weekly game. Alas, for inexplicable reasons, wargaming is not regarded as an essential function justifying a gathering of more than 2 people, so we called the whole thing off. This is seriously going to impact my game numbers for the year.

That leaves my gaming at a bit of a loose end. There's been some questions about wargaming by Skype or whatever, but generally I wargame as much to be with people as play the game. Never really done a lot of solo gaming.

There are projects to do. My Montrose Army has been sat on the desk being painted very gradually for well over 6 months, which is very unusual for me. Partly that's because I'm doing it because I need it rather than really want it, and partly because having done loads of Jacobites in the last 2 years I really can't face anymore tartan. And then I've got some odds and ends to finish off and then a few battalions for my WSS armies from the new Strelets packets.

At the moment with the weather being nice you can get out and give the car a proper clean, inside and out, so I've done that. Not being able to drive it anywhere means it'll stay cleaner for longer, I hope. Now I have Shedquarters it can also go in the garage and that'll help keep it pristine when the weather turns. Then there's always some gardening. Spring is sprunging, so the lawn needed a mow and weeds in the paving blocks needed removing and so on.

I'm currently trying to finish off the manuscript for the next Northants Battlefields Society publication, which I'm writing with Mike Ingram. We were aiming to launch it at the Battlefield Trust AGM the first weekend in May, but that aim has been thwarted a bit due to its cancellation. My feeling is that we should stick to the agreed schedule and work on it whilst it is still fresh in our thoughts. The challenge there is Mike is a freelance writer and tour guide, so he's having to increase his paid writing as no one is doing tours at the moment. We're nearly there, anyway. Spent yesterday morning sorting pictures and maps out. 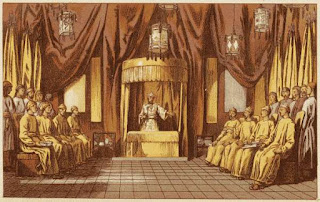 When I'm done with that I really must crack on with the rules for the Taipings etc. I've started to re-read some background. Since I last had them out there's been a lot more historical stuff available on line, so I need to look at that, too. I've also been hunting around for out of copyright images to spice up the pages, like this one of the Heavenly King holding court.

I do really need to get another publication out there, as sales of the other two have stalled a little bit. Having said that "To Ur..." has now shifted 250 copies, and "It's getting a bit..." has reached 99, so that's not to be sniffed at. The guys at Outpost have also confirmed that sales of Pacific Wars had a noticeable increase in January, so that's something to be pleased with and mirrors what has happened with Pendraken.

What that seems to mean is that there are people out there taking notice and doing stuff. Be good to see some AARs or blog reports.