Luckily, in my hectic life, I was able to find some time to put some finishing touches to my Strelets fusiliers.

This involved finishing the basing for the second regiment (Dalrymple's) and adding some flags. The flags are a bit generic Scottish regiment, being a simple blue saltire, then a variation on blue with thistle for the Colonel's colour.

I took them into Shedquarters for a quick photo shoot with the phone. Alas it was a wee bit bright, with the early summer sunshine pouring through the windows. I really must dig some curtain rails out of the spares in the garage, and put up some drapes. 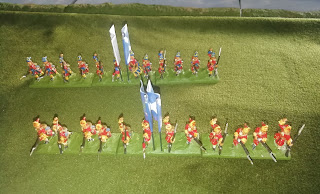 Dalrymple's are at the front. Apparently they had two red lions on the front of their mitres. I gave them two wiggly red lines instead. 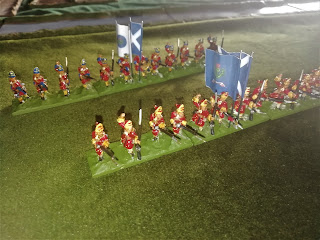 I had to re-do the flags as the varnish really did a number on the ink from my printer, making bit run and smear. Instead I fell back on covering them with clear sticky back plastic, which makes them glossy like the figures, and also helps hold them in the wavy position. 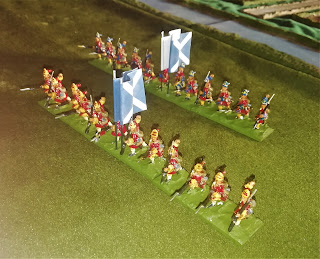 I have a couple of the tricorn units on my painting bench now, waiting to be cleaned up. These might take me a while to get round to. If the weather is going to be as nice as they say, the paint will be drying before I can get it on the figures. I may be forced to sit in the shade and write wargames rules, as it's clearly going to be too hot for gardening.