The last week or so I've had a major push working on the "Taiping Era" rules. The download version I put up several years ago (don't look - it's gone now) was 12 sides of A4 with a single page QRS. I thought at the time that I'd covered everything, but the act of writing it up and doing the examples and diagrams showed me that wasn't the case as I've remarked before. I'm up around 40 pages of rules text (still only one page QRS), and I haven't done the historical background and painting guides yet.

Things do seem to be clicking into place, and the core mechanism is robust and generally applicable, in that it can be used in all situations. The recent spell of less clement weather has meant that there's no excuse not to work on them although it is less pleasant sitting in the study than sitting in the garden in the sunshine.

I have also gone back and admitted I need to sort out the French Army for the 1860 campaign. I did buy all the figures to do them from Lancashire games then found them terribly out of scale compared to my existing Irregular Miniatures figures. The Lancashire fellows have gone up on ebay, to an underwhelming response so far, and I sent in an order to Mr Kay. His FPW figures are close enough to the 1860 uniform, although probably a little heavy on the packs. I might have been better to have gone for his French Foreign Legion figures, especially as I had to add neck cloths to the kepis in any event. No matter, the figures are ordered and have arrived. Alas the lockdown seems to have mushed my brain a bit, and I ordered too many trurcos and not enough light infantry. Still, I can make them up later.

I decided as well that I'd buy fresh pots of blue and red paint for the uniforms, so I don't run out half way through the paint job. I usually buy a lot of my paints at shows and my french blue and red come from a non-brand supplier I see at Newark mainly. In the absence of such things, I tried out my Local Model Shop, hoping it would be open. Luckily it was.

Turns out they've never been busier, and there certainly were a few people in there, discussing model aeroplane motors and model railway rolling stock and me hunting through the newly arrived boxes of Strelets figures. It seemed to me that the lockdown had seen a run on blue and red paint, and I ended up buying some Humbrol acrylic, which I haven't done for years, and a pot of Revell, which I've never used instead of my regular Tamiya. 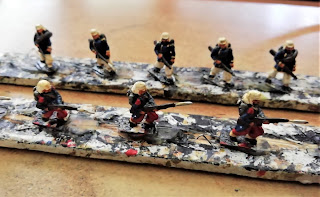 So here we have some Chasseurs, at the back, and a line battalion at the front. It's a compact little force, hampered only in the campaign by a lack of cavalry. They had about 60 Spahis with them, and that was it. And no commissariat. They had to be supplied with lots of kit and so on by the British force, which was one of the best supplied field forces put out after the Crimean debacle.

So, better stop this typing lark and get back to the Taipings.