After a thoroughly satisfactory game of Taiping Era, Richard was up next with the infamous "Infamy, Infamy", from TFL. Richard is a TFL fan, Phil just wants to find one of their games he likes. I'm just trying to understand why they are so popular.

Infamy, Infamy is Sharpe Practice transposed to the Roman Imperial period. I couldn't get what SP was supposed to be (other than a simulation of the laughably small reenactments that were part of the TV show), so not sure what I expect from II. 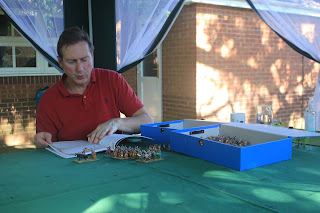 Richard had brought all the bits and his nice toys. The game doesn't play on a grid, I just didn't take the cloth off. 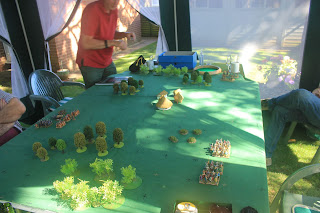 We had some Romans with a wagon and some Gauls with a village. We (that is the Gauls) had some ambush jump off points marked by unpainted figures. 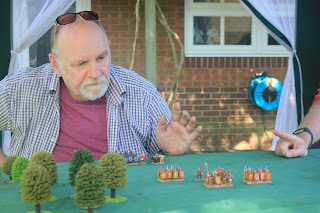 Phil had some Romans. You get to deploy things as their tokens are drawn from a bag. Or cards turned off a deck. 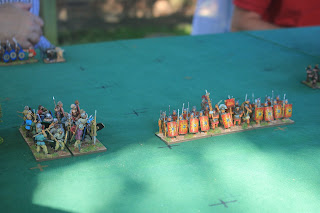 I had some levy warband. They leapt out of an ambush point and stood there. I didn't quite understand the mechanism. 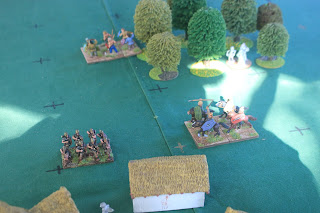 Then Chris got some cavalry out. He did understand the mechanisms, and launched a flank charge. 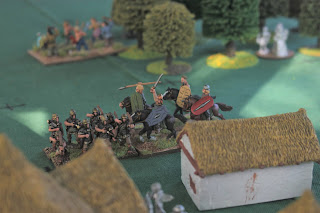 Archers taken from the flank!! Ha ha! Roll 'em up. 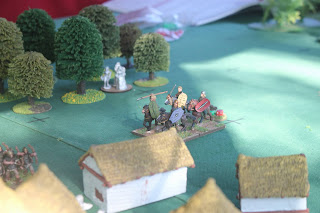 Or get bounced due to bad/good dice rolling. 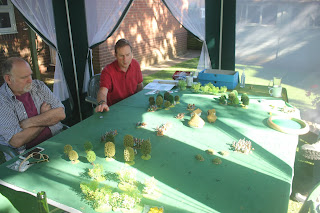 Richard explains the niceties of moving things to Phil. 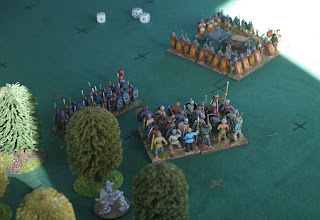 We're in the second round of moving, so my levy wheel round to take on the auxilia. 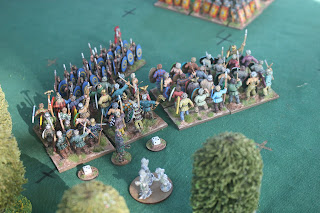 But what's this? Elite warband storm out of the woods. 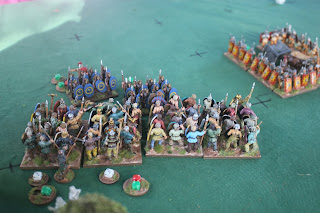 Lots of dice and lots of damage, almost. Romans have heavy armour and are tough to kill. 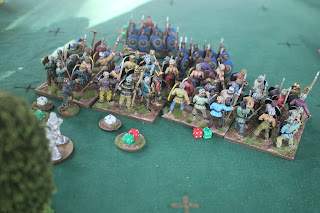 I was then able to throw my weight in. More mayhem ensued. 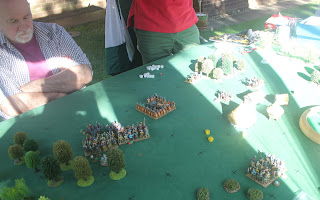 We then had to pack up, as Richard had a long drive home.

Conclusions? Well, it makes sense if you ignore what units the figures are meant to represent and just get on with it. I watched one of the original II videos about how to set the game up, and was prepared to kill myself after 20 minutes of "roll these dice, put this here, roll more dice, put this here". We had a chat about terrain generation systems. On the whole I'm not a fan.

There's some fun stuff here, like the random sequence units move in, and the ability to store up extra commands whilst not knowing when the turn will end. The combat system is sort of "whatever". You roll dice and get extra ones for various reasons, make saving rolls, then record deaths and "shock". Seems to work.

As someone starting out as a rules writer and publisher, I'm impressed with the quality of production. They've been at this for a long time, so I don't know if it has improved over time, but a lot of effort has been put in here. Plus you can buy bespoke card decks and counters. I'd guess, based on the effort, that £26 is a good price. I don't know if that's print on demand, or if they've laid a stock in. I'd guess the latter, as they have a solid fan base, and know sort of how many will sell. Still, £26 is a lot more that I'd dare to charge (they charge £16 for the pdf, which is more than I'd ask for hard copies). I don't know if they make a living out of this, but the profit margin, based on my costings is sizeable. Best of luck to them. It would be good to meet up and talk to them about how they go about producing and marketing what they do.